The main goal of this characterisation was to find out which E. Coli strain was the most effective among three different strains (TOP10, DH5α and BL21), to obtain a rapid and high red fluorescence with pSB1C3-BBa_J04450. We also studied the influence of adding 0.3mM of IPTG on the RFP expression in these three strains to see if the leak was different between host strains.
Indeed, former iGEM teams had described a leaky expression of fluorescence with this biobrick, which means there was no need to induce expression with iPTG to obtain a high rate of fluorescence.
As we raised the question in the context of our project, we thought it might be useful to know which E. Coli host is the better to use depending on the conditions you want. For instance, you might want to strictly control RFP expression and so you will need to reduce the leaky expression at most. On the contrary, you may want to have the highest leak as possible to avoid using IPTG, a need our team encountered for the using of our automated system.

We wanted to test three E. Coli strains usually used in laboratories : DH5&aplha;, TOP10 and BL21, to see, in the context of our system, which one would be the host with the fastest and highest production of RFP.
We used a bacterial stock of our own, coming from commercial bacteria cultured and made competent using our protocol (see protocols) a few weeks before the experiment and conserved at -80°C.

We made an heat-shock transformation (see protocols) of 23ng pSB1C3-BBa_J04450 in 25μL of each bacterial strains. We then cultured transformed bacteria in 250μL LB broth medium for one hour until they expressed chloramphenicol resistance. Then, 750μL of LB broth was added with chloramphenicol and incubated for one hour. After centrifuging the bacteria for 10 minutes at 5000 rpm, we replaced the old medium by resuspending the bacterial pellet. We also split the samples in half, and put each new samples in 30mL LB broth with chloramphenicol, completed or not with 0.3mM of IPTG.
We then measured red fluorescence (620nm) and O.D.600nm every hour for 27 hours.

The results are represented in the following figures.
The data presented here start 17 hours or 18 hours after transformation because we didn’t observed any fluorescence until this point. This might be due to the huge culture volume in which we put bacteria (30mL). A huge volumed allowed us to make a long experiment with lots of measurements, but it also diluted a lot the bacteria and their fluorescence. 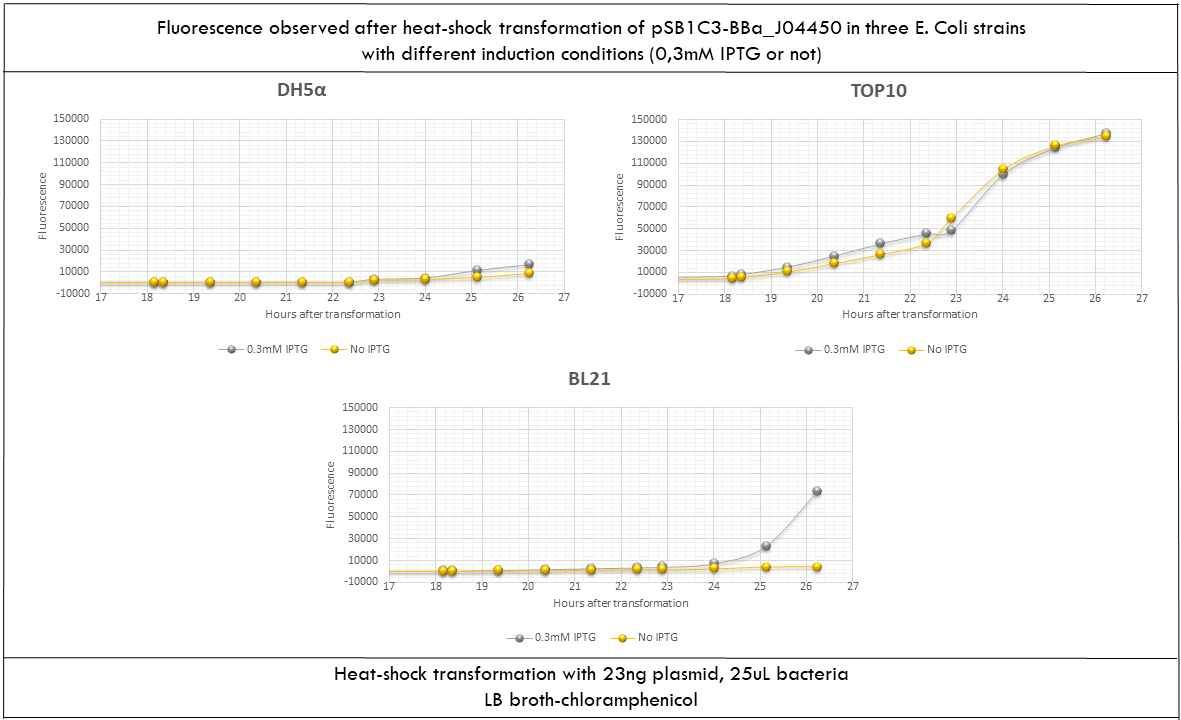 The first figure shows the fluorescence obtained for each sample, without taking into account the number of bacteria in the sample. These results were useful as a part of our project, as we wanted the highest fluorescence rate with the lowest time of apparition after transformation to improve the sensibility and speed of our detection system, regardless of the corresponding amount of bacteria.
The figure shows that fluorescence obtained with TOP10 E. Coli was a lot higher than the ones obtained with either BL21 or DH5α. 620nm measured fluorescence for TOP10 was twice as high as the one obtained with BL21 and more than 7 times as high as the one for DH5&aplha;. We also observed fluorescence a lot sooner with the TOP10 bacteria : 18 hours after transformation versus 23-24 hours with the other strains. As for the DH5α and BL21 comparison, we can see that DH5α had a much lower fluorescence rate, whereas BL21 gave pretty good results when induced with ITPG. 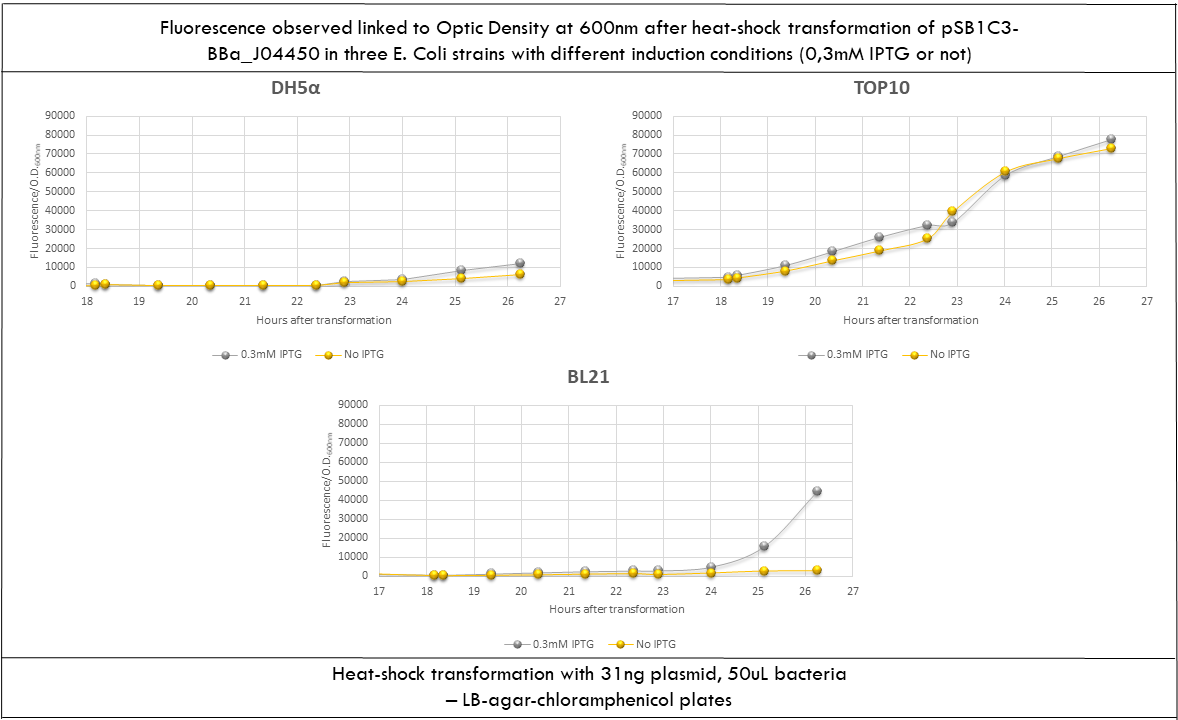 The second figure represents the fluorescence rate rectified with O.D.600nm measurements. This allows to compare in a more quantitative way the fluorescence obtained, as if for each point, we had the same number of bacteria. It must be noticed that the differences in O.D.600nm were not clearly significative between the samples, which means that we can still compare them as they probably were in the same growing phase.
On this figure, we can see that there is no significant difference between the experiment with fluorescence only, so we can make the same observations as in figure 1. 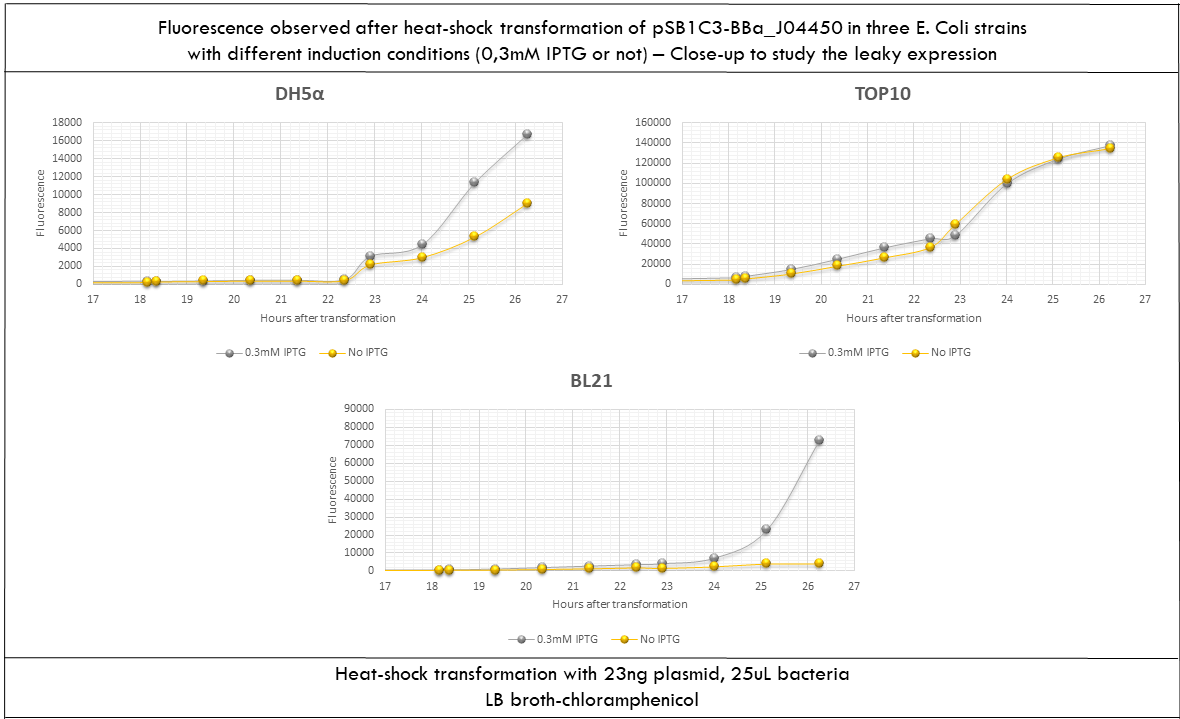 The third and last figure represents the same results as in figure 1, but we made close-ups to better study each strain and the differences between induced and non induced promoter.
For the DH5α, we can see that there is a higher fluorescence rate for 0.3mM IPTG than without induction. However, we can still observe fluorescence without induction, which corresponds to the promoter leak : it represents almost half of fluorescence obtained with IPTG.
For the TOP10, we can see that there is almost no difference between the patterns obtained with or without induction. This means that the promoter leak is so important that IPTG induction is not significantly useful at all : the biobrick may be transformed and the RFP expressed in this host without using IPTG.
For BL21, the difference between induced and non-induced expression is clearly apparent : there is almost no fluorescence without IPTG, whereas expression with induction began to increase exponentially from 23 hours after transformation. This strain appears to be the most effective if you need to reduce the promoter leak as much as possible.

The delay before fluorescence must be analyzed with caution, as it might have been affected by the huge culture volume compared to the start amount of bacteria.
The fluorescence rate and promoter leak must be further studied in these three strains with higher concentrations of IPTG to see if we would obtain different results.