What's the meaning of our research project? From the beginning of the IGEM preparation, we struggled to find the answer. The purpose of science is permanent -- bringing benefits to human society. Thus, we conducted our human practices, including a public survey and three interviews to specialists. Moreover 2 public events, establishing school club and publishing social media, we try to seek the social impact we could create.

China is a special country, different from traditional developed countries, such as America, British, and France and also different from normal developing countries, such as South Africa and Brazil. China contains the largest population base which is over 1.3 billion people, so, many social issues have their traits, so-called Chinese characteristics. We conducted a deep survey considering formaldehyde, a popular and unique social issue in China. When it came to the diversity of samples, we adopted both online survey and traditional survey using papers, which finally got a satisfactory result.

In the first question, we wonder that how well do citizens know about formaldehyde. Surprisingly, 74 percent of people claim that they have known about formaldehyde, and only 5 percent of people know nothing about it. The data proves our previous thought that formaldehyde is an especially popular social issue in China, so it should have an important social meaning and breadth. We believe that if this issue can be solved, there will be a large social impact on majority of Chinese.

Q2: How well do you know about formaldehyde Q3: Would you pay attention to the concentration of formal dehyde in our daily life? This question exposes the severity of the formaldehyde social issue. It presents that although majority know formaldehyde is kind of material that could cause cancer and other serious diseases, they choose to ignore it in the daily life. Over half of people suggest that they will test formaldehyde concentration only if they feel uncomfortable about it, which could miss the best treatment time and even can lead to death. Those 26 percent of people who never care about formaldehyde would take an even bigger risk of the serious effects. Considering the low awareness of excessive formaldehyde concentration, we feel anxious about the attitude showed by the general public when we are collecting the data. So we want to focus more on the right measures that prevent people from formaldehyde poisoning. Besides, we are curious that if we could invent an easier way to test the formaldehyde concentration in the room to avoid serious result caused by people's unawareness.

Q4: Decoration in a new house would generate formaldehyde, so how would you judge when to move in? In this question, we want to know more about ways people are currently using for formaldehyde concentration checking. Because is a multiple-choices question, we choose the three highest options to analyze: Keeping the house empty for a year, using active carbon or other physical methods, and using plants to absorb toxic gas. Noticeably, most the people would not choose to invite an expert to test it. Instead, they use ways to decompose formaldehyde based on their own life experience, which lacks the scientific evidence to certify whether the concentration reach the standard. So we could infer that people's solutions are not only appropriate, but also irresponsible for themselves and other people live in the house. At the same time, we know that we should provide an easier way in order to make it accessible to citizens.

Q5: Do you think current technology could solve the formaldehyde issue? Q6: Suppose today's technology could solve the problem, which one do you think is the most efficient? Q7: If the mothods above could solve the problem, but have some shortcomings, which one would you choose? The fifth question reveals the general understanding of formaldehyde degradation. For 38 percent of people, because their careers are not related to this issue, they would not pay attention to the scientific improvement in this field. Thus, our research and activity have a significant social impact on their basic understanding within this field, which could largely reduce death rate caused by formaldehyde. For 50 percent of the people who believe such technology can efficiently solve the question of formaldehyde, they are possibly students or some white-collars who have their own evaluation and attitude toward the technology development. They can better accept the concept of synthetic biology and may have the deeper comprehension of our project. In a business perspective, people who can understand the principles of formaldehyde degradation correspondingly will be easier convinced by our theory, which means that at least 50 percent of the people will be our potential "customers".

In the sixth question, we found that all other three choices share nearly equal rate except the choice “use special material to sealing the formaldehyde”, which matches three methods of solutions: physical method, chemical method, and biological method. Among the three methods, the one with highest pick rate is using a transgenic plant with ability to absorb formaldehyde, matching with the biological method. People probably give this conclusion because of their daily experience, believing certain genetic period responsible for formaldehyde absorption, which conform to science logistics. Also, the low pick rate option “use a special material for sealing the formaldehyde” indicates that people refuse the incomplete decompose of formaldehyde. The finding gives us an important indication of the direction of research, which would base on the ultimate complete degradation of formaldehyde.

The seventh question is the analysis of the pros and cons of the four choices given in the sixth question. We list advantage and the potential risks of every method objectively, which could let people to make their own judgment. We can see from the graph that after listing the advantages and disadvantages, the difference between physical, chemical, and biological method become bigger, up to 15 percent, which proves people’s support to the biological method. But Chinese fear of transgenic objects is the difficulty we are facing in the project. However, through the analysis of the research statistics, we found that people’s opposition to transgenic is not as apparent as the concern of incomplete decomposition of formaldehyde; this makes us more confident at exploring the project further.

Q8: Where do you get the information about formaldehyde? The last question focuses on the HP lecture. Knowing how people learn the knowledge can help us better estimate people’s mastery of the knowledge in formaldehyde decomposition, which can facilitate the process of popularization of science.

Using the term of research in the early phase of the project is an effective way. It not only provides the instruction for our research direction, but also rises our awareness of the gravity of formaldehyde issue, which motivate us to do something for the whole society. Moreover, this survey also serves as a good vehicle to the preparation of two public events conducted in science museum later.

1.In order to learn more about impacts of formaldehyde on our daily life, one of our team members, Yiliao Huang took an interview with Mr. Wei who is an expert tremendous work experience in the field of Environmental Protection. In this interview, Huang discussed about several problems which are widely concerned with Mr. Wei.

Q1: The first question is whether oil paints of all brands consist of formaldehyde.

Q2: Why is the concentration of formaldehyde in restroom always higher than that in other rooms?

What causes this is that restrooms are always sealed and over decorated.

Q3: How much time does a newly decorated house need to have all formaldehyde released?

This is dependent on the material you used and complexity of decoration. 19 Celsius Degree is a temperature in which the formaldehyde begins to be volatile and above which it diffuses in a faster speed. That is why people do house decoration in summer. Some unqualified furniture and oil paints require longer time to release all fatal gases.

Q4: Why the problems of formaldehyde poisoning are not so prominent in foreign countries (other than China)?

Decoration of foreign countries puts more concentration on how natural it is and has a strict standard during production. Moreover, one family has a relatively small number of members and larger internal space.

Q5: Why do Chinese people give increasing concern to problems from formaldehyde?

Focus from public and social media combine to have such an influence. What is more, some rumors also make people worried.

Q6: Is it possible to use some cutting-edge techniques such as plants and microbes?

Yes. Also activated carbon is very effective, but ventilation is still a method that majority of people prefer.

Q7: So in general, could you please give us some suggestions?

Firstly, you would better choose qualified material. Secondly, more ventilation is quite beneficial. The last is that simple and natural style is always better.

2.To comprehend actual situation about the how and the magnificence of effects that formaldehyde brings to human, our team member Xueyang Jiang took an interview with Mrs. Wang, a respiratory physician with 24-years working experience. 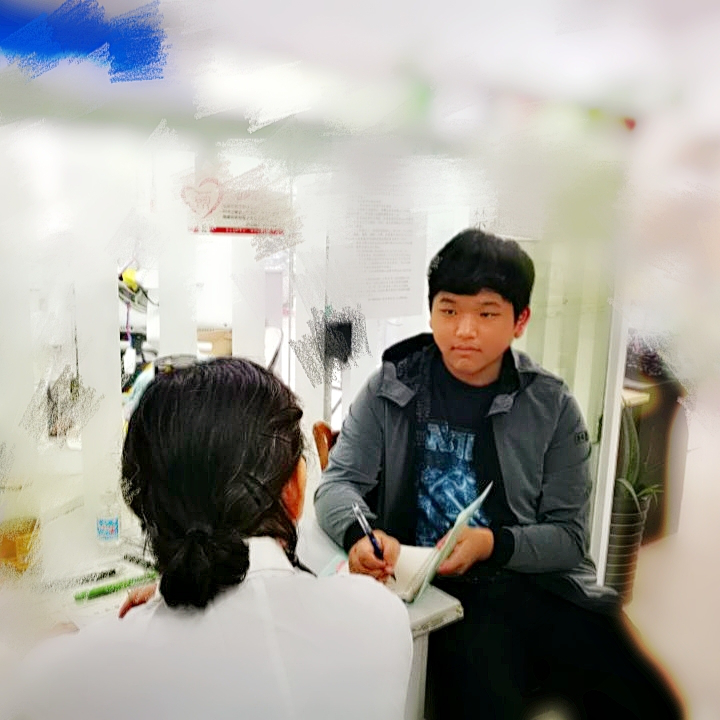 Xueyang Jiang: Hi, Doctor Wang! Thanks for squeezing your time to give me such a opportunity. So, as a beginning, could you give us a statistics about how many patients in this hospital have suffering from formaldehyde per month?

Doctor Wang: In fact, there were only a few cases related to formaldehyde there. Since formaldehyde mainly comes from painting used in decorations and people do not frequently decorate their home, not many people get diseases related to it. But once it happens, it could lead to trigger serious problems.

X: Then can you be more specific about the problems?

X: Wow, that’s quite amazing. Our team has designed a genetically engineered Escherichia coli which can detect and degrade formaldehyde. Could you please offer us some thoughts for improvement?

W: well, because your “machine” is actually bacteria, you need to make all the formaldehyde in the room contact with bacteria to eliminate them. This has been a very creative design for its efficiency, but to make it more practical there is still many things to do.

3.In order to better understand the current technical methods for formaldehyde pollution treatment, we interviewed Prof. Zhenghao Xu from College of Environmental and Resources Science of Zhejiang University. Prof. Xu told us the formaldehyde pollution problem was a more like public concerns rather than a scientific research interest. In one hand, some irresponsible enterprises’ products disqualification resulted formaldehyde content out of limit sometimes which might cause health problem; in the other hand, public lacked of knowledge about formaldehyde and were not able to discover whether the formaldehyde really over standard. To remove the formaldehyde, ventilation is still the best and easiest way. Biological method based synthetic biology could be a way to degrade formaldehyde, however, he believed an efficient formaldehyde detection device might be more useful for general public.

4)Comparing with physical and chemical method, biological method is a potential way to degrade formaldehyde

Based on the research results, we may conclude:

1.Because of unqualified materials and furniture, formaldehyde pollution is a serious problem existed in China, especially for the new decorated houses.

2.Formaldehyde may cause serious health problem but incidence rate is very low

3.General public have a significant concerns on the formaldehyde pollution and media ballyhoos might make people overanxiety

4.General public are looking forward some new technology, including biological method to overcome this problem

5.Biological method based on synthetic biology might be a good solution for formaldehyde detection and degradation.

Based on the results mentioned above, we are clear on our research objective and modified our research plan as the following aspect:

2.Design a low-cost and efficient formaldehyde detection and degradation device