In our biological part, we aimed to design a biosensor that can specifically detect biomarkers in samples. Through investigation, we know that the aptamer could well convert the protein into other more detecable signals.

We obtained some aptamers of CK-MB protein using the SELEX method, so we decided to use CK-MB protein to construct a system to prove our design. 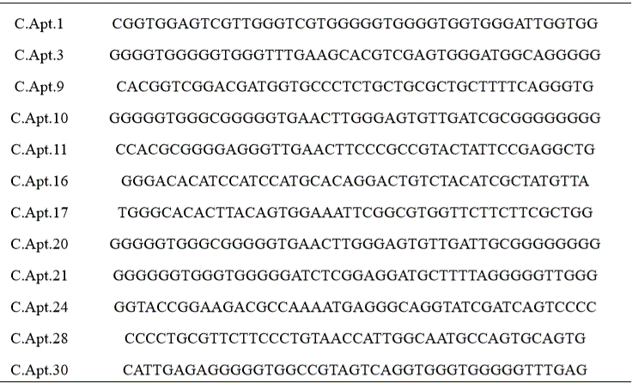 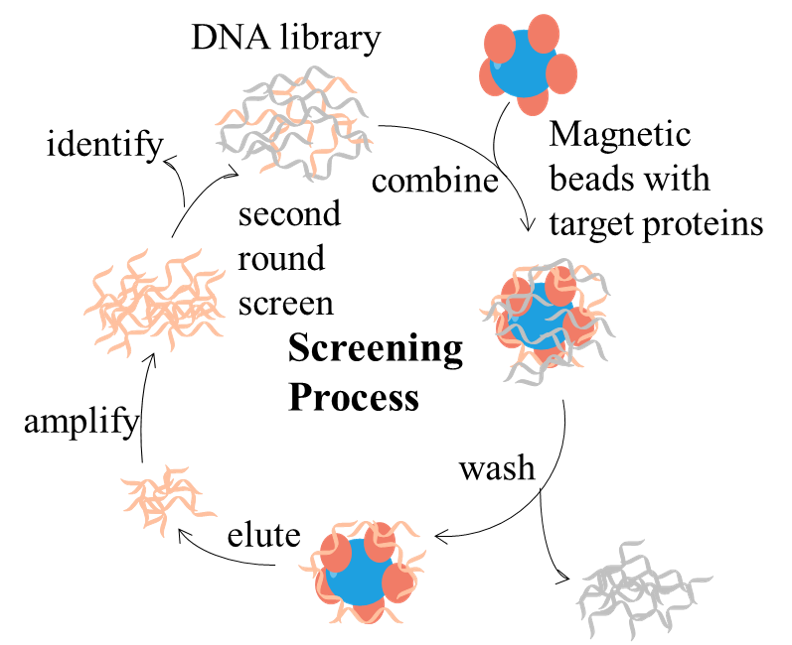 We chose Apt.21 to perform the aptamer and CK-MB protein affinity experiments first. Its principle is similar to ELISA. The gradient concentration protein was coated in a 96-well plate, and the bovine serum albumin (BSA) was blocked and then ligated with biotin. After that, horseradish peroxidase (HRP) with streptavidin was added to connect with the aptamer. Then ,add TMB developer to react with HRP in blue. Finally , measure the light absorption value, if the aptamer has a good affinity for the protein, the OD value will increase as the protein concentration increases. 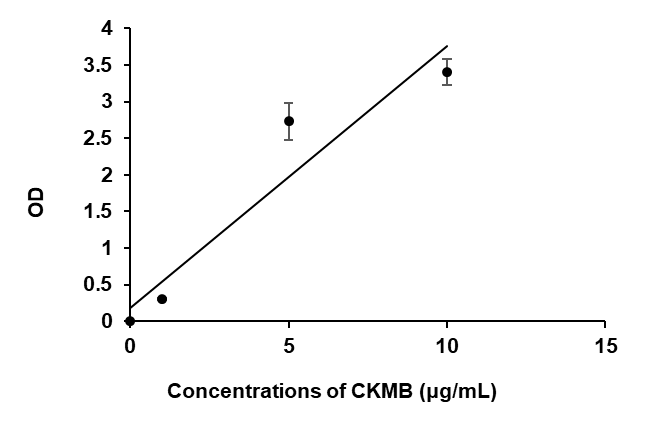 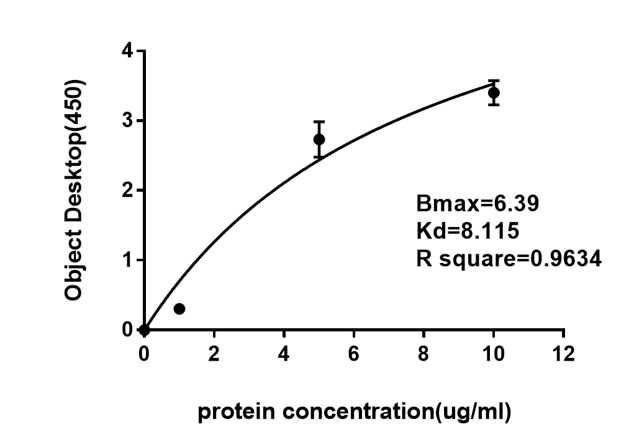 Fig 2. According to the data on the left, we calculate the dissociation constant Kd of the aptamer.

According to the experimental results, the dissociation constant is small enough, which means that the ligand binds strongly enough with the CK-MB protein to conduct the competition experiment (protein couple aptamer, complementary chain decoupling). 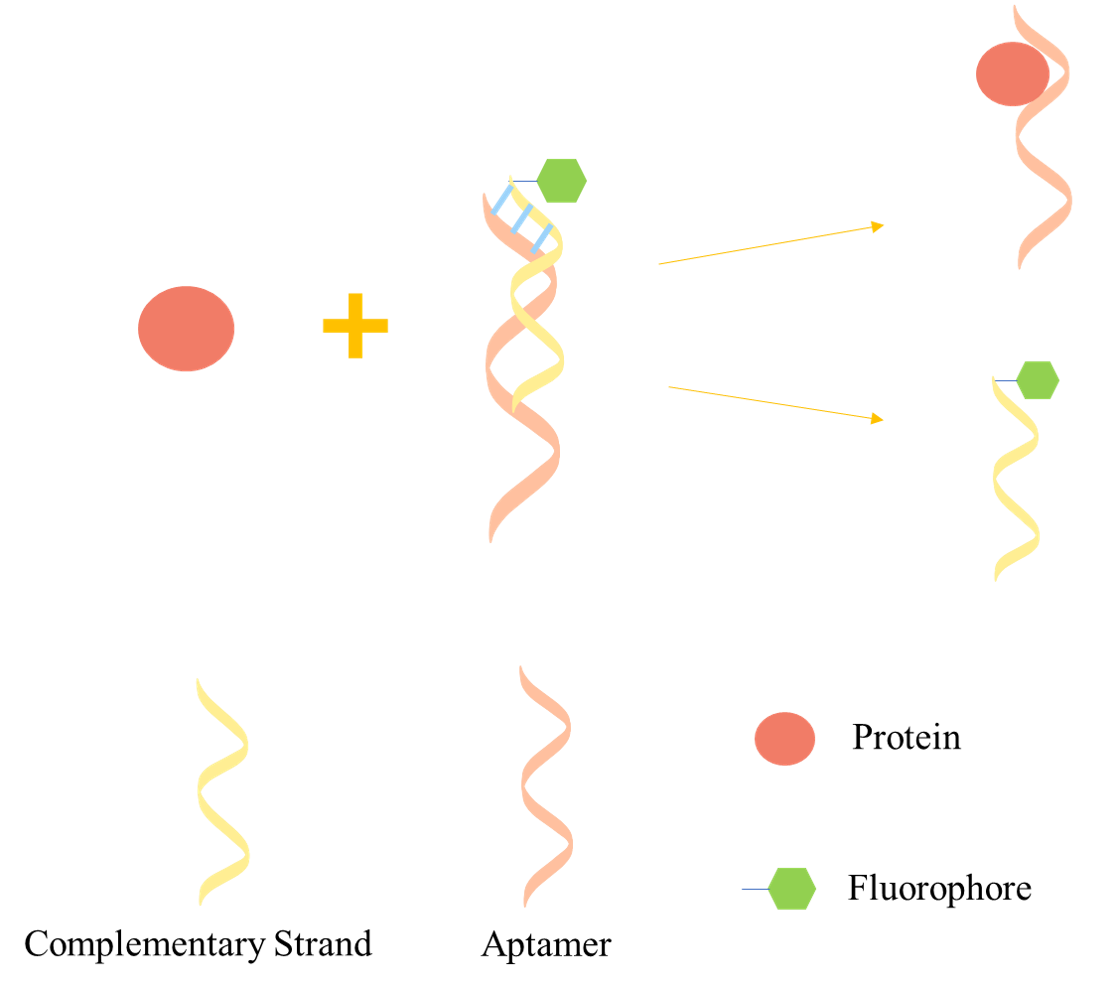 Before the competition experiment, we carried out some preliminary experiments, to explore the relevant factors that affect the competition experiment. We use a complementary strand modified with a fluorophore to couple with an aptamer, decoupling complementary strands with a certain concentration of protein, then measuring the decoupled fluorescence intensity. Change the condition of an experiment and explore its effect on protein decoupling by comparing the fluorescence intensity. 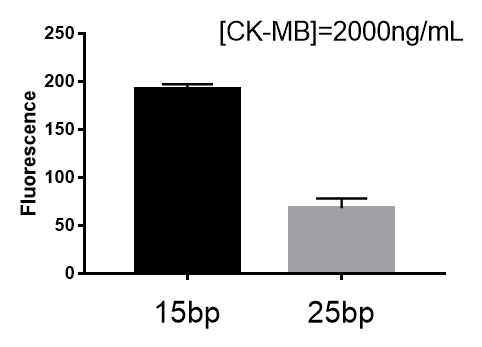 Fig 3. The effect of the length of the complementary strand on the coupling 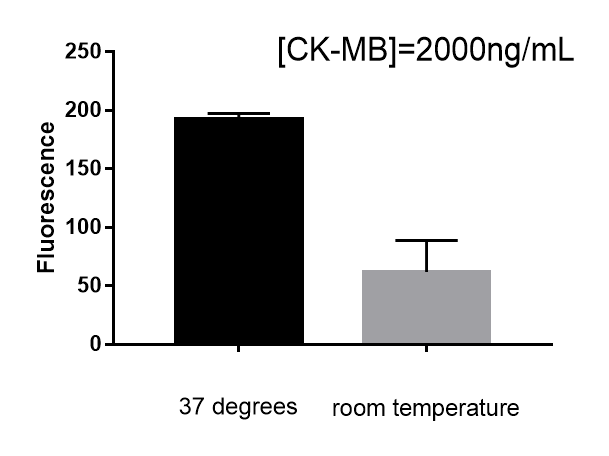 Fig 4. The effect of the temperature on the coupling

The following are some of the most suitable reaction conditions we have explored.
Complementary chain binding length: 15 bp
Reaction temperature: 37℃
Number of washings at the end of the reaction: 5 times
Aptamer complementary chain reaction time: 1h
CK-MB reaction time: 1.5h
There are still many conditions that may affect the reaction. We have not explored it. We will continue to optimize it in the future.

The competition experiment is to detect the fluorescence value of the supernatant by reacting different concentrations of CK-MB protein with an equal amount of magnetic bead-aptamer-fluorescent complementary chain complex. 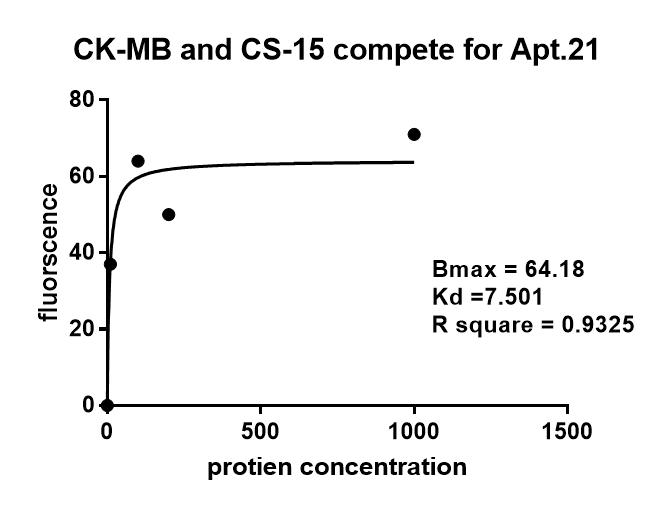 The experimental result data proves that the function of the aptamer in the system is normal.

As for the design of microorganism probe, we first carried out the design of engineering bacteria, and we constructed plasmids that could express the fluorescence of green, red and yellow. 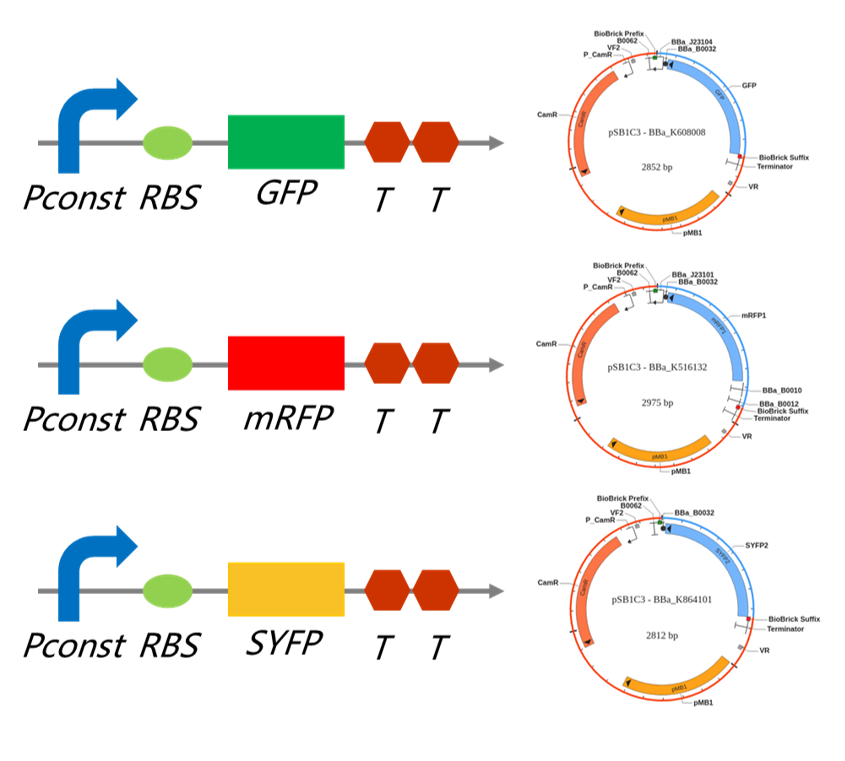 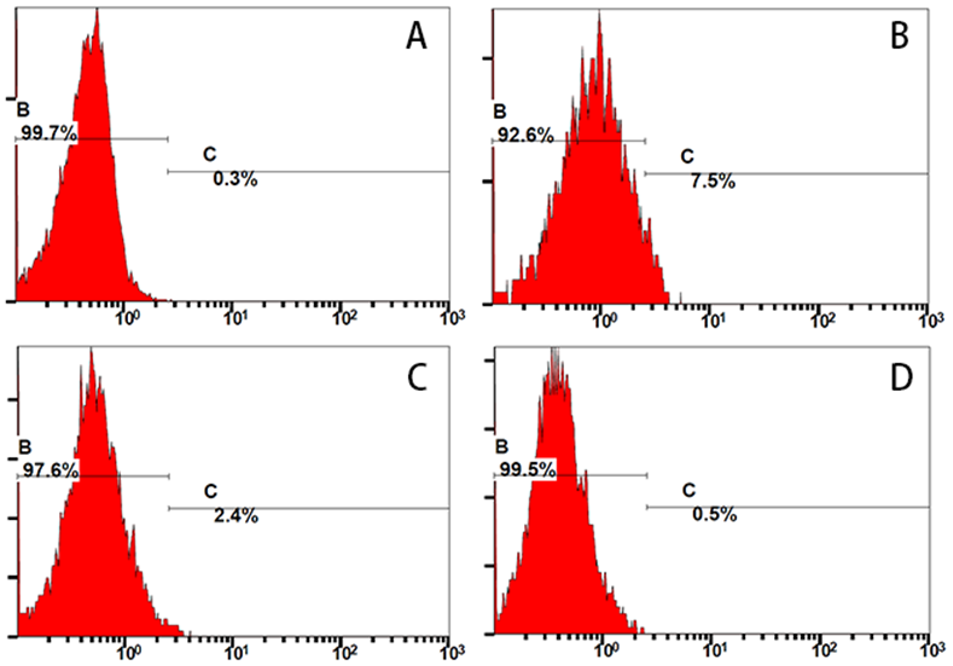 The results indicate that the engineered bacteria and complementary chains are successfully linked, and the amount of DMSO in Condition B is the best of the three. Our overall system can be obtained by mixing the engineered bacteria attached to the complementary chain with the magnetic beads attached to the aptamer (the aptamer and magnetic beads are linked by biotin and streptavidin).

Before conducting the overall system function test, we conducted experiments on the growth curve of different inoculum concentrations. 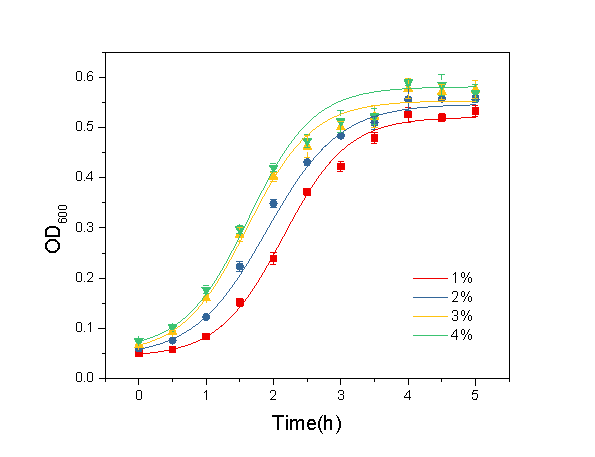 The whole system test was carried out by reacting different concentrations of protein with an equal amount of the system to obtain the supernatant containing the engineered bacteria, inoculated into 20 ml of chlorinase-resistant LB medium at 37℃ shaker.Then ,we measured the growth curve and recorded the fluorescence value. 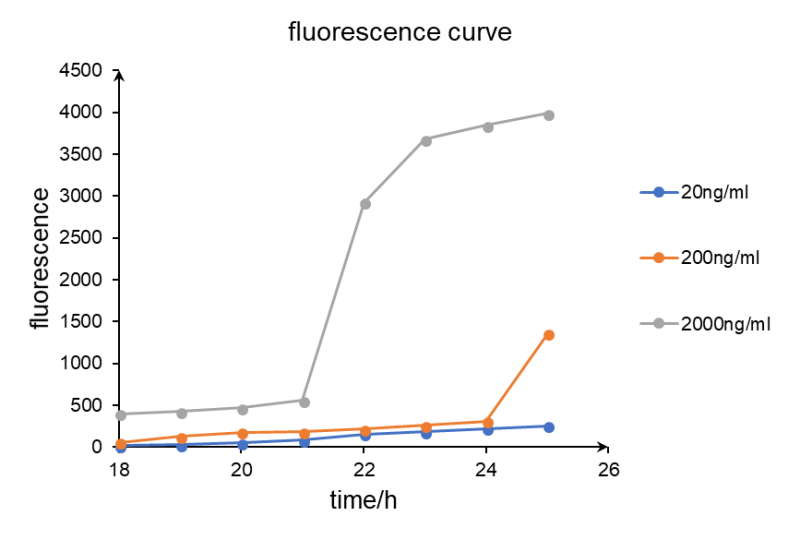 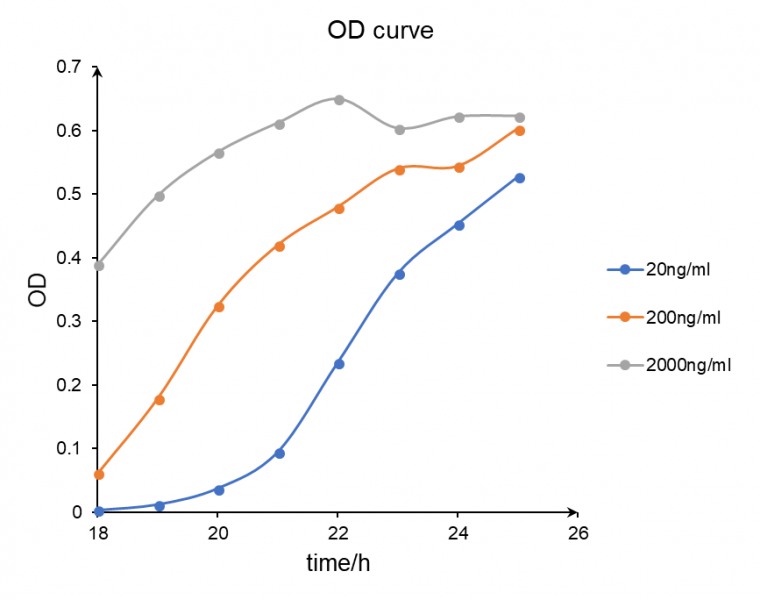 It can be seen that different concentrations of the target protein have obvious differences after sensory expression, indicating that the overall system function is normal. 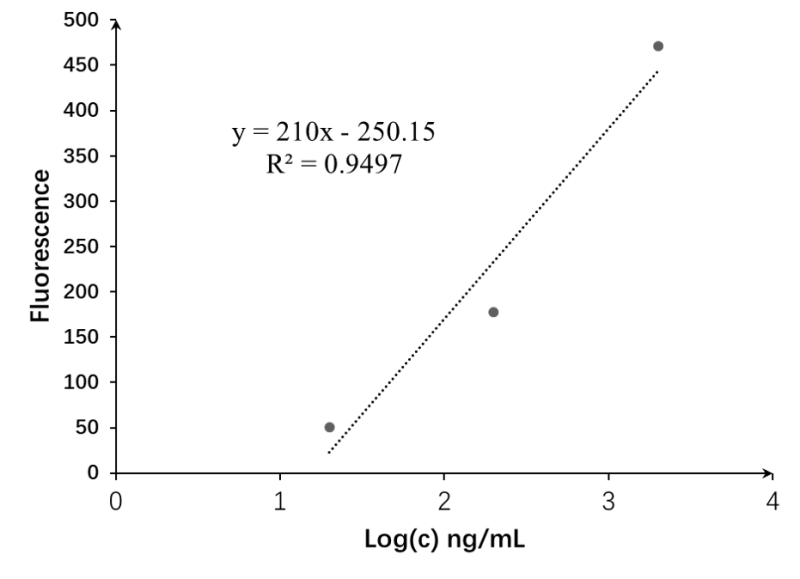 Fig 8. We selected the data for the 21st hour, taking the logarithm of the protein concentration as the abscissa and the fluorescence intensity as the ordinate.

The above test results demonstrate that our system can effectively perform quantitative detection of disease markers. 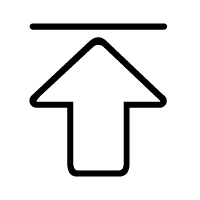