The chemicals secreted into the soil by roots of plants are broadly referred to as root exudates. Through the exudation of a wide variety of compounds, the roots may regulate the soil microbial community in their immediate vicinity, cope with herbivores, encourage beneficial symbioses, change the chemical and physical properties of the soil, and inhibit the growth of competing plant species. A large amount of literature suggests that root exudates may act as messengers that communicate and initiate biological and physical interactions between roots and soil organisms.[1-5]

Our project aims to “programme” microbes to detect specific crops by sensing their root exudates. Each plant species has a different set of root exudates [6-13], and the aim is to engineer a chassis bacterium, Bacillus subtilis, to respond differently to different exudates and hence sense the plant that is currently being grown in the soil. There are numerous possible applications of this concept, including plant specific nutrition, stimulating disease resistance, and targeted toxicity. An application that we decided to work on is solubilization of phosphorous present in soil for easy uptake by plants.​ 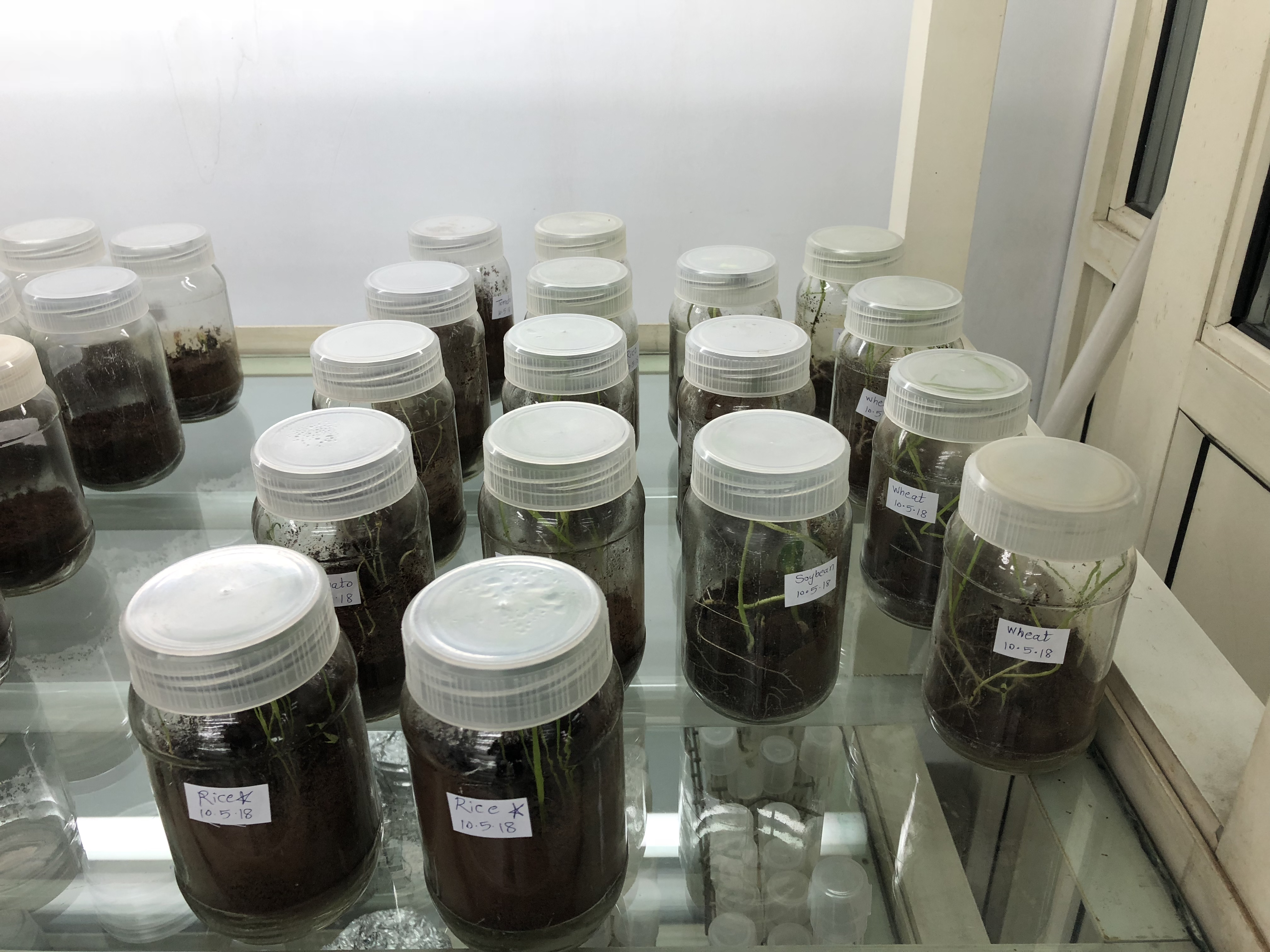 The goal is to study the unique response of B. subtilis to different plants' root exudates. For this, four crops that are widely cultivated in India, namely rice, wheat, soybean and tomato, were used as experimental specimens. Seeds were germinated in sterile soil, and saplings were grown under sterile conditions and their root exudates were collected. B. subtilis was grown in presence of these exudates, and RNA was extracted from the bacterial cells. RNA sequencing is being carried out to identify genes that are highly expressed in the presence of the exudates. Promoters of such highly expressed genes will be used to construct a genetic switch that responds to plant exudates of specific crops.

Phosphorus (P) deficiency in soil is a major constraint for agricultural production worldwide. Many soils throughout the world are P-deficient because the free phosphorus concentration (the available form to plants) even in fertile soils is generally not higher than 10 mM, even at pH 6.5 when it is most soluble. Low levels of P are due to the high reactivity of soluble P with calcium (Ca), iron (Fe) or aluminum (Al), which leads to P precipitation. Inorganic P in acidic soils is associated with Al and Fe compounds, whereas calcium phosphates are the predominant form in calcareous soils.

Despite this, most soils contain significant amounts of total soil P that occurs in inorganic and organic fractions and accumulates with phosphorus fertilization. Organic phosphorus inputs to soil from plants and microbes are mainly phosphodiesters, which must be hydrolysed by phosphodiesterase and phosphomonoesterase prior to the release of free phosphate for biological uptake.[14-15]

The ability of soil microorganisms to solubilize various forms of insoluble P fractions is well documented. Bacillus spp. and Rhizobium spp. are the most powerful phosphate solubilizers among bacteria.[16-19]

Role of Engineered B. subtilis 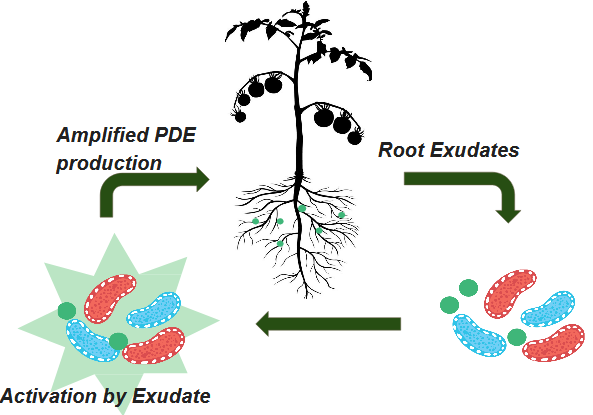 The engineered B. subtilis will perform two functions:

Upon detecting the plant, the engineered bacteria will secrete enzymes that convert the phosphorus in the soil into a form that is more easily assimilated by the plants. The production of the enzyme will be amplified by incorporating a gene amplification circuit [20] within the chassis bacteria. Since the circuit will be triggered only in the presence of specific exudates, depending upon the plant of interest, weeds will effectively be prevented from using up most of the phosphate in the soil.

Systemic acquired resistance is an induced defense mechanism in plants that inherently protects the plant against a variety of diseases.[21-24] It is analogous to the immune system in animals, as it primes the plant to defend itself against pest attacks and diseases following earlier localized exposure to the pathogen. The limitation of this system is that it is activated only after exposure to the pathogen, i.e., after the pest has attacked the plant once. Further, the effect of SAR is not perpetual and wears off with time.

A number of commercially available chemical activators induce SAR in plants, the most popular of which is salicylic acid (SA).[25] However, a number of problems are reported with the continuous and prolonged usage of such activators, such as low yields and reduced seed sizes. This is mainly due to the large energy deficit caused to plants when they are under constant influence of the activator.

A way around this problem is to design a dosage system in such a way that the plant is periodically exposed to the activator such that it has intermediate periods in which it is free of the activators’ influence. For this purpose, an oscillatory circuit [26] can be incorporated within the chassis organism, B. subtilis, such that it releases salicylic acid (which can be synthesized from a metabolic intermediate), in optimized doses.

How will this project benefit Society?

As a part of Integrated Human Practices, the team spoke to multiple experts in the field of agriculture, fertilizers and bio-fertilizers, including farmers and innovators. From the surveys and farm visits, a lot of information was gained which indicated the need for the solutions that this project promises.

Pesticides are currently being used as a curative measure for plants affected by pathogens and pests. However, pesticides have a large number of well-known ill-effects such as persistence in groundwater, neurological disorders, cancer, respiratory illnesses in farmers, and contamination of fruits and vegetables.

Moreover, the use of pesticides is not a preventative measure. If SAR can be continuously primed in the plants, it would eliminate the need for pesticides and ensure that the disease does not affect the plant in the first place.