Filamentous fungi have a very characteristic growth pattern on solid medium, forming a large network of interwoven filaments (3). If we can accurately predict how a fungus will grow over time, it will allow us to determine the optimal growth conditions to gain the best end product. Therefore, we have investigated how the fungal morphology changes over time at two levels of details.

One of our models focuses on the morphology at the hyphal level by simulating the movement of hyphal tips, branching rates, extension rates and the density levels during a growth period in two dimensions. All of the code scripts can be downloaded in this zip file.

The mycelium of a fungus consists of many interwoven hyphae, and the density depends on how many filaments there are in a given location. In fig. 1 below, it is possible to see microscopic pictures of fungal mycelium. Three different levels of zoom illustrate how the network looks, where it can be observed how they interlink and how a fungal filament can branch into more.

Fig. 1: Snapshots of mycelium development of Aspergillus oryzae. These are representative microscopic images of how a network of intertwined hyphal filaments could look in a microscope.

Simulation of the mycelium development

Fungal growth is initiated by $n$ number of spores, and a branch will start to extend from each of the spores added to space. Following along one of these branches originating from a single spore, the hyphae will grow in a direction $\theta$ with a tip extension $r_{tip, i}$. A branching event, in which a new branch is formed from the first branch, can occur with a probability $q$. Tip extension rate is calculated by using the equation below, which considers growth kinetics for the fungus and the amount of substrate available. It essentially outputs the accelerated growth dependent on the amount of substrate available, where the accelerated growth equation depends on fungal kinetics and branch lengths (1, 3). \begin{equation} r_{tip, i} = \bigg(k_{tip,1} + k_{tip,2}\cdot \frac{l_{br,i}}{l_{br, i} + K_t}\bigg)\cdot\bigg(\frac{S}{S+K_s}\bigg) \end{equation} $k_{tip,1}$ is the initial tip extension rate of the branch and $k_{tip,2}$ is the difference between the maximum extension rate and $k_{tip,1}$ (1, 3). $K_t$ symbolizes the time it takes to reach half of the maximum extension rate. The length of branch $i$ described by $l_{br,i}$. $S$ is the substrate concentration and $K_S$ corresponds to the substrate concentration to reach half of the maximum growth level (4). As the starting coordinates of this simulation are $(x_0, y_0)$ and end coordinates $(x, y)$, the length of branch $i$ can be calculated as the distance between two points: \begin{equation} l_{br, i} = \sqrt{(x-x_0)^2 + (y-y_0)^2} \end{equation} By dividing the growth area into a grid of $w\cdot h$ areas, it is possible to investigate the uptake of the substrate, hyphal movement and the development of biomass through the simulation.

At the start of the simulation, it can be assumed that the initial substrate concentration $S_0$ will be distributed evenly across the grid. When the spores are placed randomly, the branches start to develop by using the substrate available around the hyphal tip. So for each branch, it is checked which tip is in which grid and whether there is any substrate available. That means that one can track the substrate depletion in each grid, and when there is no more substrate in one of the areas of the grid, the hyphal tips located there can no longer grow and can be considered as inactive hyphae. If the total area around the mycelium no longer contains substrate, the growth will simply stop.

In the same way as tracking substrate depletion, biomass production can also be viewed in a grid. But instead of calculating a loss of substrate, each new branch extension is considered a gain in biomass or the density $d$. It should show the same mechanics as the substrate depletion, as these two are directly related to each other by the equation $l_{br,i}$.

The simulation ran with the parameters listed in table 1, which painted a detailed picture of the time history of growth from the spore to the densely branched network of hyphal filaments. The parameters are based on growth of Aspergillus oryzae in Spohr (2).

The end results can be viewed in fig 2. below, where three animations are shown of the hyphal development: hyphal movement and locations, biomass development and substrate depletion. It is the same mycelium simulation in all three animations, where we can observe that the density increases as the substrate level decreases.

Fig. 2 Left: Hyphal development over time from 10 spores. Middle: Density development as the hyphae grows. The darker the color the higher the density. Right: T-he depletion of substrate over time, as the fungus uses the substrate to extend its hyphal network. The lighter color indicates lower levels of substrate.

Fig. 3 shows how the hyphal lengths are increasing at the beginning of the growth simulation, whereas there are initially few hyphal tips. But as time progresses, the number of hyphal tips starts to increase drastically due to there being more and more hyphae and the original branches being longer. The frequencies of hyphal lengths and branching events can be seen in fig. 4, where the majority of the hyphal elements are very short and have not branched that much. Those that are longer are also those which have branched more often than the rest. The substrate level decreases as the amount of biomass increases, where this pattern can be observed in fig. 5. All of the substrate is not gone, but that is due to the fact that the mycelium growth was not that efficient in using all the substrate in the given simulation time. 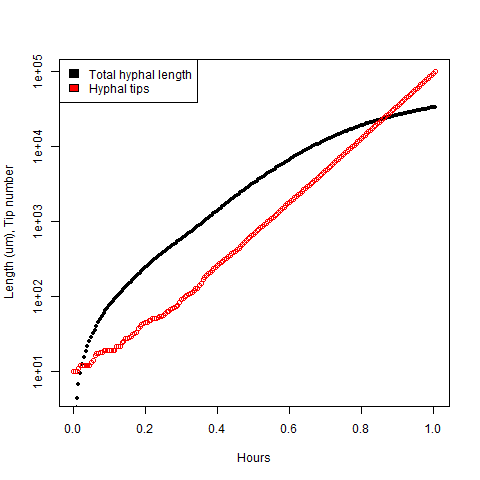 Fig. 3: The number of hyphal tips (red) and total length of all hyphae (black) over time in the simulation. 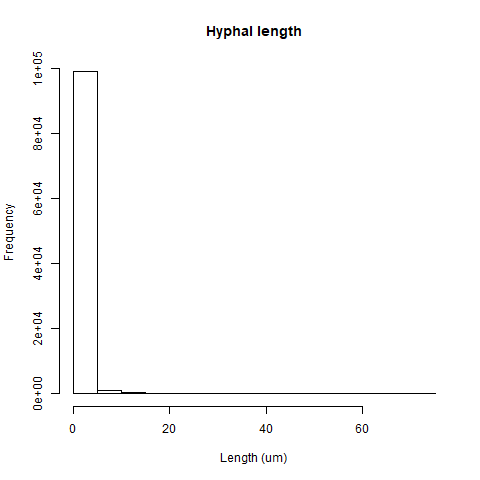 Fig. 4a: The frequencies of hyphal lengths, where it can be seen that the majority of the lengths are lower than $\mu$m. 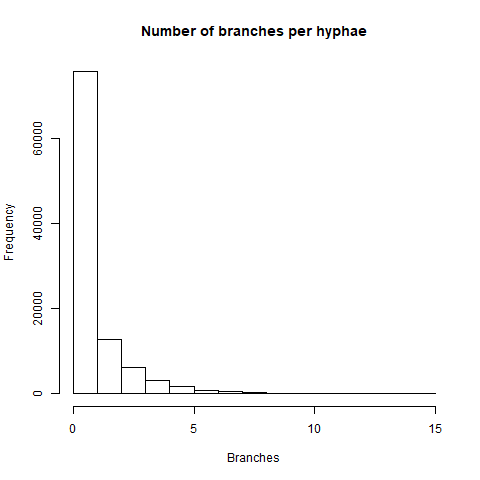 Fig. 4b: The frequencies of the number of branching events per hyphae, where most of the branches only have less than 5 events and those that have more are the oldest branches in the simulation. 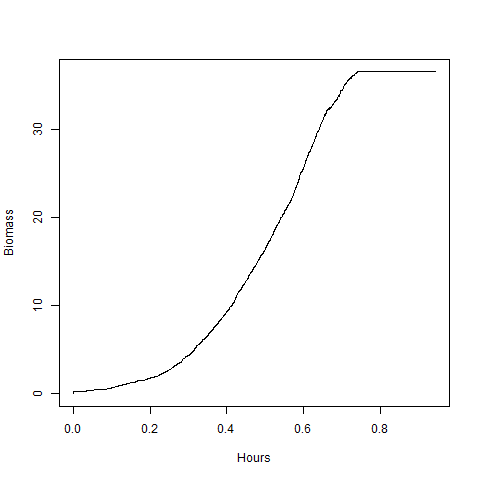 Fig. 5b: The increase in mycelium biomass over time, where the curve follows an exponential growth mechanism. 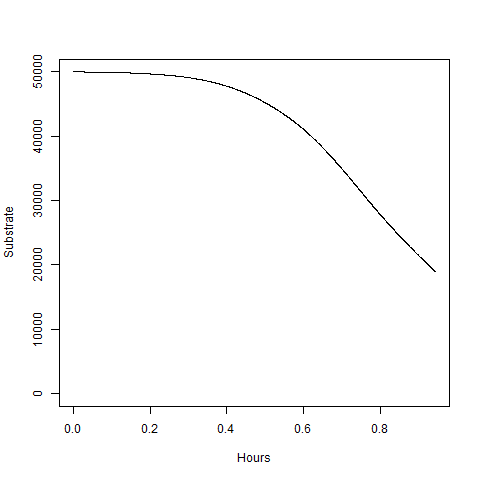 Fig. 5c: The substrate level over time decreases as the mycelium develops.

Fig. 6: An example of substrate limiting growth, where the hyphae uses all available substrate in their squares and are therefore unable to escape to areas with more substrate.

The model shows how the fungus grows in 2D, so it can be interpreted to work as looking at a petri dish in detail. If the model were expanded into 3D, the result could be related to filling out a form and still studying the hyphal interactions at a very detailed level. 3D models of fungal growth do already exist, for instance see Lejeune (3) that simulates the growth of the filamentous fungus Trichoderma reesei.

There are many different factors that influence the growth kinetics and this model only includes a few of them. Parameters such as temperature or oxygen levels could be implemented to get the simulation to work more realistically.

We now wish to move from a model describing the individual hyphal growth to a continuous model, which can describe the change of biomass density as a function of time and space. This can be seen as a meso-level model, which only needs information about the substrate level, conversion efficiency, and internal diffusion rates to model the spread of the fungus through time and space.

First, the model will be introduced, along with a table of relevant parameters. Afterward, some key results will be presented.

The system was spatially discretized on a 150x150 grid, which created a set of ordinary differential equations for each grid point (for a more thorough introduction see here). These were numerically integrated using a numerical $2^{nd}$ order strong stability preserving Runge Kutta method, using the package DifferentialEquations.jl in Julia (6). No flux boundary conditions were imposed, which is also known as a Neumann boundary condition, these are deemed realistic since we will be growing our fungus in molds. Alternatively, periodic boundary conditions could have been interesting if it was decided to make a spatial grid of inoculum. All calculations were vectorized and parallelized, which allowed us to simulate large systems on personal laptops.

Fig. 7: An example of the most simple fungal growth, with an initial central growth which spreads outwards radially.

Note how the density maxes out, while the fungus expands radially outwards, akin to what is observed in a lab setting.

As described in the micro-model, the meso-model of course also limits the growth of the fungus based on the available substrate. This naturally occurs since any increase in fungal biomass is caused by a conversion of substrate to biomass. The model predicts a growth similar to the real measured growth of fungi (7), although the scaling of time and biomass are system dependent the overall trend is the same. These results are similar to those obtained in the micro-model, and shows that the model can also simulate realistic growth curves in the simple case. Note the asymmetry of the final growth, caused by an initial asymmetry of the initial spores grown in the micro-model.

In the final product, it will be interesting to investigate how several different colonies can fill up space, and investigate how the distribution of fungal biomass will be in the product. This model allows us to start several different colonies, by setting the initial concentration of mobile biomass as non-zero in several places and letting the system evolve. 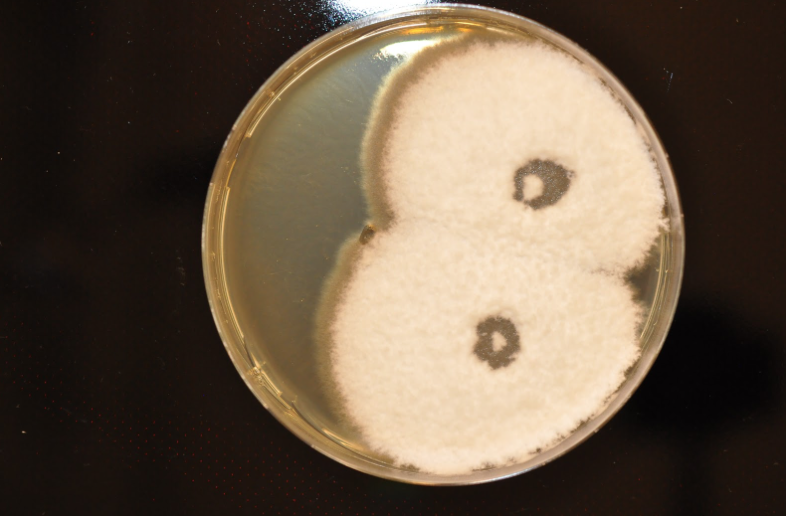 Fig. 9: No antagonistic behaviour between colonies has been observed in S. commune

Fig. 10: A system with two colonies starting out next to each other and merging.

The two fungi met after a few timesteps and grow together to almost form one. As the substrate concentration is lower on the outskirts of the fungi, the periphery of the colonies have a lower density than the center.

This model only works for non-antagonistic colonies (8), since otherwise, we would need a growth inhibitor when the two colonies meet. But as the picture of S. commune show, and based on observations of the growth of A. oryzae, we did not observe antagonistic behavior between colonies of the fungi we looked at.

Expanding the model to 3-spatial dimensions should be fairly trivial, and would offer a better representation of how the density of mycelium changes as a function of time in the final molds. But the primary challenge is verifying that the density distribution is as predicted by the model, this could perhaps be achieved by measuring the absorbance of an agar plate with fungal growth. Furthermore, the parameters of the model have not been experimentally measured.

The micro-model is already based on parameters from the growth rate of A. oryzae, but coul potentially be used for other species of fungi. None of our experiments measures the branching rates and how the hyphae interact, but the model would be more precise if these were included. The model itself allows us to gain a good understanding of how the fungal behaves at very detailed levels.

The meso-model could be calibrated based on the measured growth rate of whatever fungus is used, as long as there are no antagonistic behaviors between colonies, and an arbitrary shape could be filled to a certain minimum or average density. Since our statistical model shows that the density of fungi is an important system parameter, this allows us to estimate the fungal density of our boxes and to calculate how fast different shapes are filled with mycelium.

(5): Falconer RE, Bown JL, White NA, Crawford JW. 2005. Biomass recycling and the origin of phenotype in fungal mycelia. Proceedings of the Royal Society of London B: Biological Sciences 272:1727-1734.