Our overall project can be broken down into four sub-projects. These are characterized as the following: Mycelium Material & Habitat Development, Mycelium Glue Project, Mycelium Filter Project, and finally the Mission Architecture that ties everything together. Below are the descriptions corresponding to each subproject.

To view the Experiments and Methods that correspond to the Project Descriptions below, please see our Experiments page linked here.

Mycelium is the vegetative structure of a fungus, and is analogous to the root system of most plants. It is able to branch out and fill in the gaps of various materials and substrates in the goal of gaining as much nutrients as possible. Because of its unique properties and its ability to grow into virtually any mold if there are sufficient nutrients, the use of mycelium has been on the rise. With the goal of creating Martian and Lunar habitats at a reduced cost, the following research has been framed with several off-planet considerations in mind. The optimal conditions for mycelia growth on various substrates were investigated; both for on and off planet applications.

The primary species of fungus that has been used in the Stanford-Brown-RISD lab is Ganoderma lucidum, unless otherwise noted. G. lucidum was chosen as advised by PhD Candidate Rolando Perez, of the Drew Endy Lab at Stanford University. Perez noted that of the numerous species of fungus he has worked with, G. lucidum has by far produced the strongest mycelium materials, and grows at the quickest rate. Perez and his lab provided the Stanford-Brown-RISD Team with the initial G. lucidum plate of mycelia as well as a live fungal culture to initiate the team’s own mycelium production.

We also obtained wild type Aspergillus oryzae (Fungal Genetics Stock Collection, catalog number FGSC #A815) because of its ease of genetic engineering. This was also a result of our collaboration with the 2018 DTU iGEM team, which selected A. oryzae as their primary fungal species for their project.

Finally, we purchased Mucor circinelloides f. circinelloides (American Type Culture Collection catalog number 20132), a strain known to produce high levels of saturated lipids, compounds rich in hydrogen. As a high concentration of protons should help protect from neutrons and charged particles found in cosmic radiation. Hydrogen or hydrogen rich materials are ideal materials for radiation shielding because hydrogen does not easily break down to form a secondary radiation source.


Mycelium has been the subject of increasing renown in recent years as a versatile substrate for use in biological engineering applications [1]. In thinking about the versatile uses of mycelium for both Earth and Mars based applications, it became clear that it would be highly advantageous to have some form of attachment mechanism for distinct pieces of mycelium material. This would be advantageous for several reasons, the first being that larger-scale structures comprised of mycelium could be more structurally sound if made up of adjoined subunits rather than one continuous unit. Modular subunits, perhaps in the shape of bricks, could be grown in parallel to accelerate the process of constructing a large mycelium structure. Another compelling reason to engineer an attachment mechanism for mycelium is the flexibility it would afford individuals in space and on Mars: mycelium can grow in virtually any shape and can grow into into 20 cm by 10 cm by 8cm bricks in under two weeks.

IIn the process of selecting different forms of biological attachment mechanisms, it was found that a bacteria-synthesized, mycelium specific bioadhesive would best fit our need. First of all because of how mass-efficient the system could be made for spaceflight. It’s been estimated that on a journey to mars, the cost of transportation is approximately $2.78 million per kilogram, so transporting bacterial spores would be highly cost-efficient in comparison to several kgs of pre-made glue or larger scale attachment devices [2]. The bacterium Bacillus subtilis has been shown to be highly resilient to the spaceflight environment and would be a viable organism to use for this endeavor [3]. It’s also worth noting that NASA and other space agencies have long been developing applications of bacteria on space; once the infrastructure for these applications are in place, the addition of a singular DNA construct for our bioadhesive is an exceptionally minimal burden [4]. .


Clean water is vital. A self-assembling habitat for extraterrestrial exploration is simply not stable without a sustainable, regularly filtered water supply, and access to clean water remains one of the largest challenges humanity will face in the upcoming future, whether it’s in space or on earth. Another challenge is metal acquisition, whether from waste electronics or martian regolith. We developed a cost-effective, scalable, completely biodegradable filtration system for waste metal recovery from aqueous solution, using copper as a proof of concept. We first modified metal binding domains through computationally-aided rational design, and tested multiple in tandem to increase the binding capacity of our peptides. We then created metal binding domain - chitin binding domain (CBD) fusion proteins, using the CBD as a platform for functionalizing the mycelium surface and enhancing its properties. We quantitatively characterized and modeled the binding affinity of the individual domains to rigorously understand the molecular underpinnings of the filter. We finally created a tangible, functioning prototype composed of filter strips of pure mycelial material that removes >92% of the copper from a >300 μM aqueous solution within 30 minutes through surface adsorption and tangential flow, demonstrating the viability and utility of our novel process for filtration and biomining applications, both on earth and in space.

The goal of our mission was framed around giving other missions feasibility by giving them the ability to work in places that might be too dangerous on the surface by providing a protected environment which our mycelium structure would provide.

The habitat is based around a 3 layered plastic dome, of which the outer layer is a layer of water which will freeze into ice, another shell encloses the cyanobacteria, and lastly the layer of mycelium. Each layer provides its own benefits. The ice water layer will be drawn from a pump which will melt subsurface ice water from our landing site, this layer provides insulation as well as providing radiation protection. Lastly this layer can be partially melted to provide water to our living cyanobacteria and fungus. The layer of cyanobacteria, suspended in a water solution will receive the sunlight which passes through the ice and use this energy it to break down carbon dioxide as well as molecular nitrogen, and create biologically available carbohydrates and nitrogen. We considered a design for a system that would ensure the cyanobacteria was well supplied and that could feed the products into the mycelium matrix. The source of the nutrients required for cyanobacteria growth would in part be provided by the martian regolith as well as the atmosphere and would be supplemented with any lacking nutrients by fertilizer brought from earth. The mycelium layer provides the main functionality in the system, providing structural stability, radiation protection and insulation and can be functionalized to provide additional benefits such as water filtration. The mycelium from the species we used in our experiments as well as many others produces edible mushrooms which astronauts could eat. Our design requires some robotic assembly.

In order for our mission to succeed we have made some assumptions which are based on expert advice in the field. Talking to Planetary Geologist Jim Head, we came to the conclusion that a landing site in the Deuteronilus Mensae portion of Mars would be the most suitable. Deuteronilus mensae is near the equator so there is less seasonal temperature flux. It is still far enough from the equator that it can still recieve ice and dust accumulation and currently there is a strong hope that there is a large body of ice water within 10m of the surface in this area according to Head. The region also has a lower elevation and thus thicker atmosphere which will provide more nutrients and protection to our system as well as helping slow down any lander we send to the area.

Our group also considered the radiation environment on Mars as well as some possible solutions. Since Mars has little atmosphere nor a magnetic field to protect it from radiation, solar flares, solar ultraviolet radiation and galactic cosmic rays can bombard the surface and could cause serious damage to life forms (Zeitlin et al. 2004). For comparison, the amount of total radiation incident on an astronaut over the course of 180 day transit and 500 days on the martian surface is almost 200 times as much as a person who remained on earth would receive over an equal amount of time (Hassler et al. 2014). This amount of radiation incident is enough to rapidly kill any life form as we know it, and is thought to have sterilized the surface and some of the subsurface of Mars (Dartnell 2011). If humans are ever to live on the surface of Mars, the problem of radiation must be addressed.

While there are many proposed solutions to mitigating this radiation for astronauts or other life forms on the surface, one strategy that has not yet been studied extensively is the use of lipids to block radiation. Lipids could be especially useful at blocking galactic cosmic rays because of their high hydrogen density. According to Jonathan Pellish, a space radiation engineer at NASA's Goddard Space Flight Center, "The best way to stop particle radiation is by running that energetic particle into something that's a similar size." (Frazier 2015). Because galactic cosmic rays consist of high energy protons and neutrons, the best way to block it would be with hydrogen which has a nucleus similar in size. The high hydrogen content of plastics is already being investigated at NASA where plastics and other trash is being compacted into tiles with the hope that they will provide increased radiation protection. Lipids are similar in structure and hydrogen density to plastics and so we investigated the possibility of creating lipids to shield our habitat from galactic cosmic rays.To this end our team identified a species of filamentous fungus which produces more lipids than other species, Mucor circinelloides (Xia et al. 2011). We considered incorporating this species of fungus into our structure to increase the radiation protective abilities. Our team took some pictures of this species under a phase contrast microscope that can be seen below. 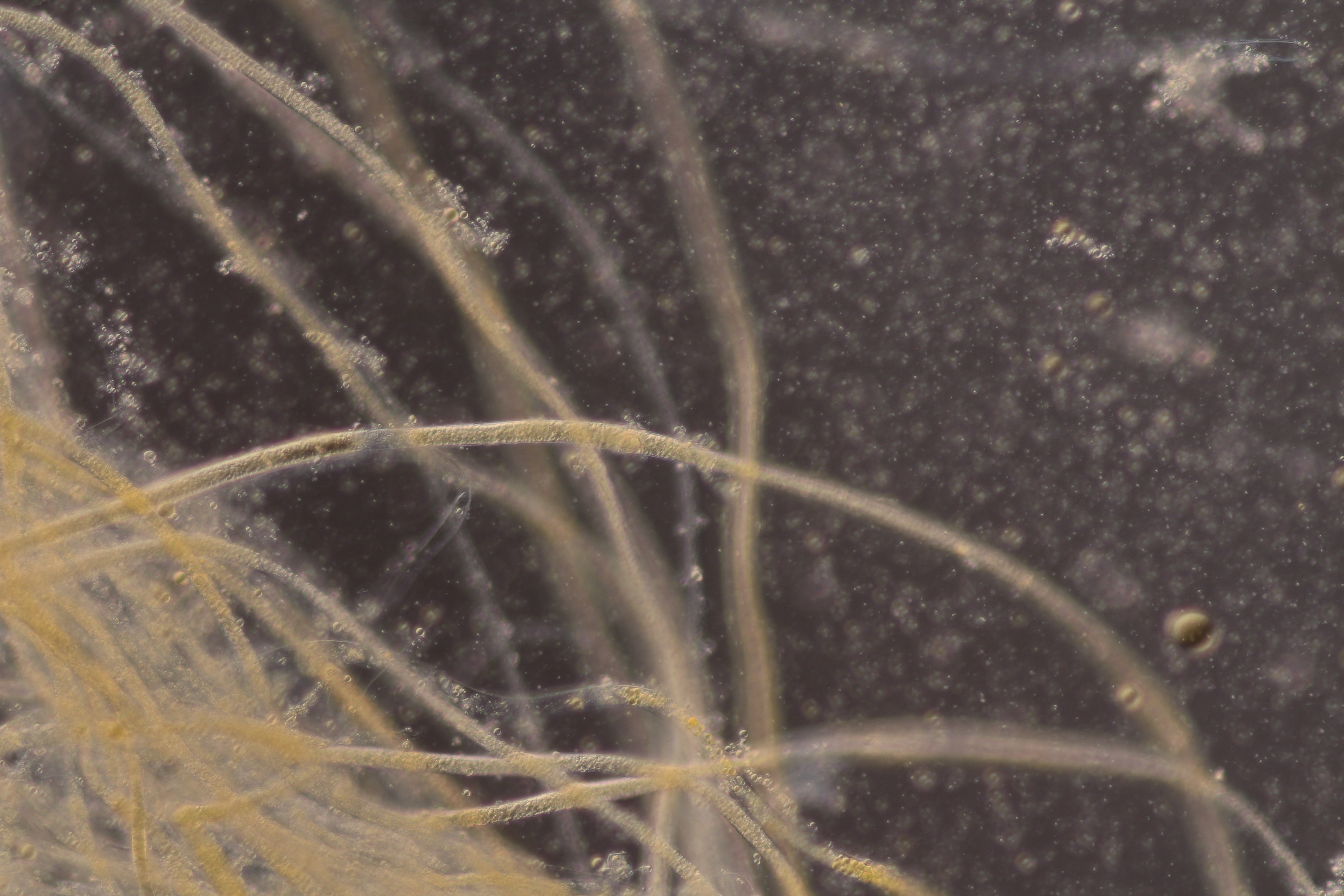 We were not able to test the radiation protection abilities of this species but believe it could be promising. Our collaborating team, DTU, also sought to reduce radiation damage by increasing production of melanin, a pigment effective against solar radiation in the form of ultraviolet absorbtion (Brenner 2008). The results of their work can be seen on their wiki: DTU iGEM

To view the Experiments and Methods that correspond to the Project Descriptions above, please see our Experiments page linked here.