Our team enjoyed collaborating with the University of Nebraska - Lincoln iGEM's team. Over the summer, our teams noticed the similar topics of our projects and decided collaboration would be a great idea. One of our team members happened to have an internship in Omaha, NE and got the chance to meet with UNL's team in Lincoln. They discussed project progress, our teams, and spoke about plans to collaborate. We settled on making an informative brochure on emerald ash borers and their potential impact on the U.S. based on our collective multiple industry contacts. Copies of this brochure will be available at our poster session and is attached below. 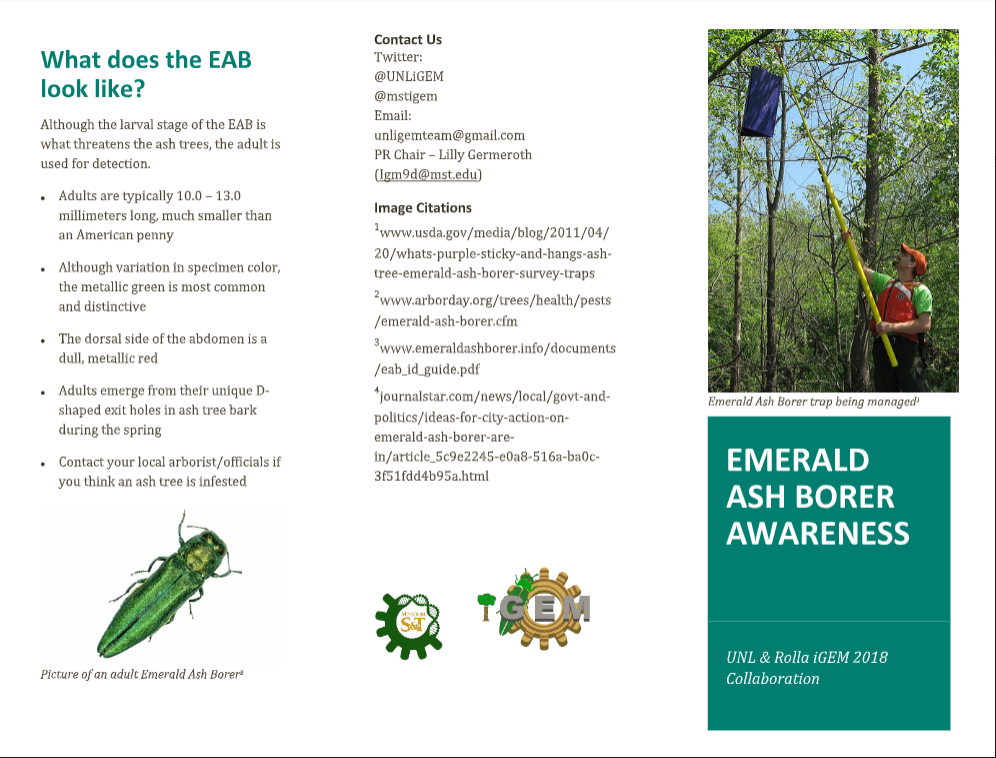 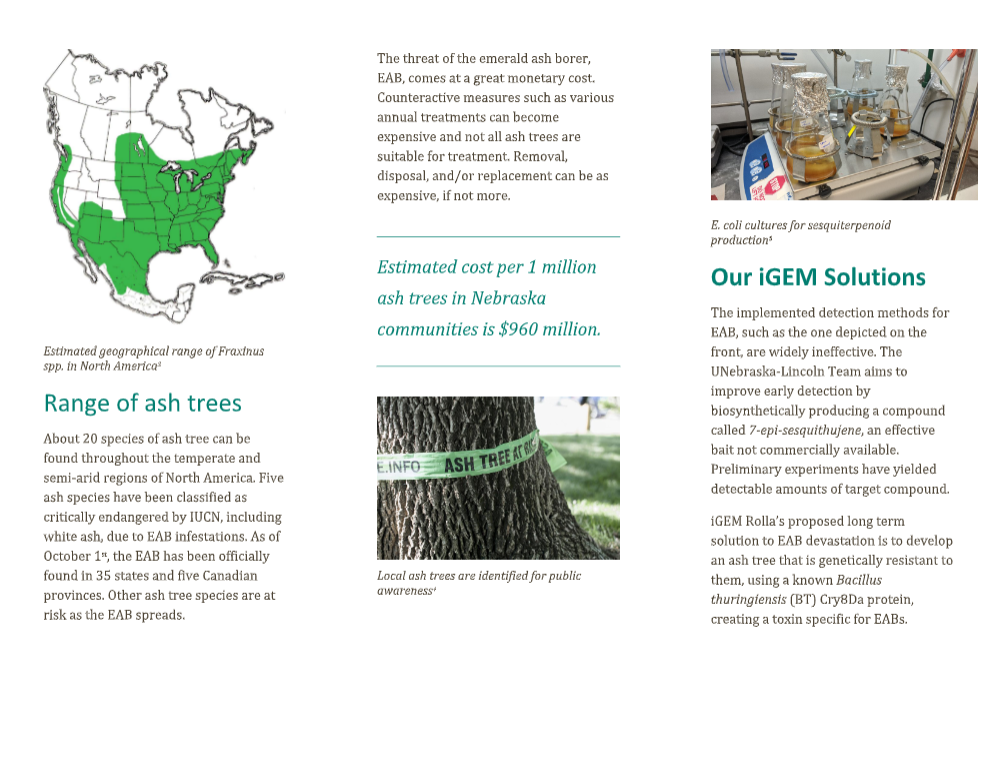 Questions we collectively asked our industry experts and academia experts

Description of your project including the benefits and drawbacks

Our proposed long term solution to the devastation of EABs is to develop a Ash tree that is genetically resistant to them. We would do this with a known Bacillus thuringiensis Cry8Da protein, by inducing mutation in the protein’s receptor binding regions to create a Bt toxin specific for EABs. After screening these modified proteins, we would utilize leaf-specific expression of the Cry toxin, in order to target the EABs as they feed during adulthood.

The benefit of this project would be that the ideal urban landscaping ash tree could still be used, just with this implementation of genetic engineering. The drawbacks of the project are that it is a very long-term solution, and does not have the effective nature of a new treatment method.

The main current treatments in place are: soil drenching, injecting insecticides into the soil, grafting of resistant ash trees, and parasitic wasps. The arborists our team interviewed prefered the injection of emamectin benzoate, as it has minimal impact on surroundings, as compared to soil drenching or spraying of insecticides. Removing trees altogether, though it is an option, can be expensive and difficult in urban environments. Another option is to integrate resistant ash tree cuttings onto normal ash trees in nurseries, as this cloning is how most urban nurseries produce trees anyways (rather than growing through seed). Predatory wasps would work most effectively in forested ash populations, as the trees are more clustered, and there is a larger gradient between the separate populations of ash.

What is the monetary impact of EABs in Missouri?

Ash trees are one of the most common types of trees used in urban environments. For example, in some parks and neighborhoods, up to 40% of all intentionally planted trees are some sort of Ash. This significant lack of species diversity means that the destructive effects of EAB will be magnified, as will the cost of dealing with it. Here in Missouri, cities have been using estimates from more greatly affected states to prepare budgets in preparation for the arrival of EAB. Considering the average cost of over $1 million in some Ohio communities, the city of Chesterfield budgeted $2.2 million for Ash tree removal and replacement alone back in 2012. Meanwhile, the city of Brentwood estimated their costs would be just over $500,000, with an average cost of approximately $65 per resident. Little information has been collected on the impact of EAB on Missouri’s logging industry, however, over 15,000 units of Ash lumber were harvested and sold in 2017 according to the Missouri Department of Conservation.