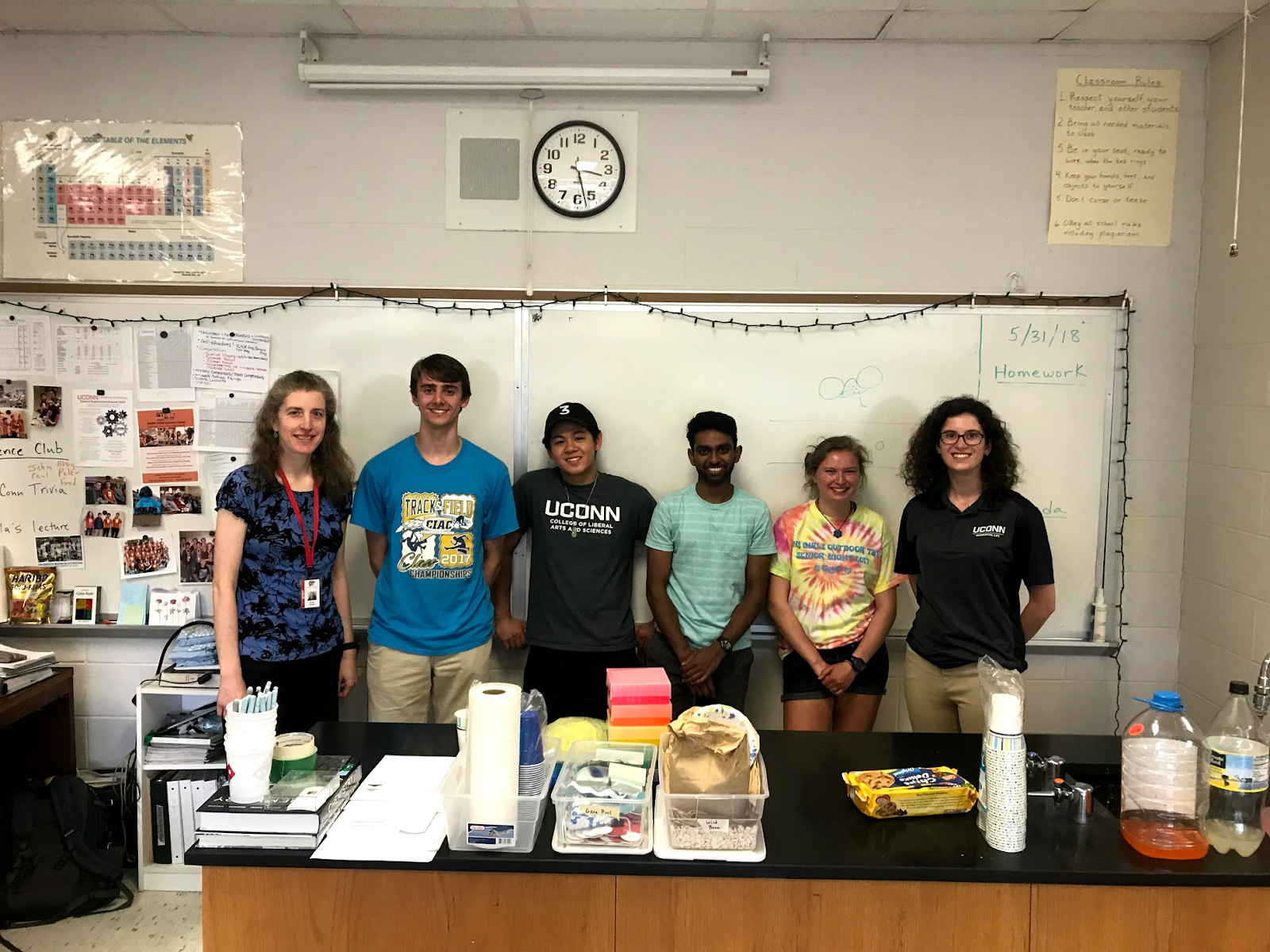 This project cycle, we focused largely on education, running several demonstrations for individuals of all ages as well as leading discussions about relevant topics. On Saturday, February 24, 2018 we lead an interaction demonstration at our local Middle School Science Bowl in which participants were able to visualize DNA via a simple extraction procedure from strawberries. Included in this presentation was a broad overview of genetic engineering, molecular biology, where we can see genetics and GMOs in everyday life, and potential career paths within genetic engineering. We’re planning a similar activity, albeit with a slightly larger age range if about 14-18 versus the range of about 12-14 during the Science Bowl. This activity will be taking place with the support of UConn 4-H Adventures in STEM on November 3, 2018.

Additionally, we led a genetic engineering trivia night for the Science Club at E.O Smith High School on May 31, 2018. This team participates in the Science Bowl and the Science Olympiad competition. Our contact, Dr. Cheryl Granger, is the supervisor for this club and was extremely helpful in guiding the focus of our questions; we wanted to design the trivia to complement their current curriculum swell as mirror the format of the AP Biology Exam multiple choice section. This event also included the primer design activity from the activity book created in 2015 by the William and Mary iGEM team. Students were split into small groups of about 4-6 individuals and and challenged to consider length, annealing temperatures, and interactions with the DNA strands as we floated through the room as consults. We briefly presented on who we are and what we do at UConn as well as gave them an idea of the scale and the content of our projects. The students were especially excited to discuss the microbial fuel cells and their possibilities in the industrial sector. This lead into further discussion about the interdisciplinary nature of genetic engineering; in addition to the manufacturing sector we briefly discussed what other fields related to engineering and what jobs are available that relate to genetic engineering.

The discussion with these students, and their unique questions, inspired us to apply an dplane a CICATS Science Cafe. Schedule for November 16, 2018 this event is designed to open a dialogue with 30 minutes presentation by Mark Mimee of the MIT Department of Biological Engineering. This keynote presentation is to be followed by Q&A session where we hope to see similar discussion as with Dr. Granger’s students at E.O Smith. The audience of the event is members of the surrounding community, from high-school students to working professionals in any field. We will be advertising the event to persons of all backgrounds, encouraging both faculty and students to attend.

Dr. Steven Suib is the director of the Institute of Material Science at UConn. He has worked in the fields of inorganic catalysis and materials science for almost 40 years. We had been looking into biofuel research at UConn when we discovered a project Dr. Suib had worked on: converting waste cooking oil from the dining halls into biodiesel to be used to fuel the university shuttle buses. Dr. Suib developed inorganic catalysts to assist in the reactions of the system they developed for converting the waste oil to biodiesel.
We reached out to Dr. Suib and he agreed to meet for an interview. He shared his insight about inorganic catalysts with us, explaining how they can aid biological enzymatic activity in a micro-organisms because they are very stable and robust. He has collaborated with researchers at UConn working on microbial fuel cells and developed such catalysts for these systems.

Moving on to biofuels, he explained how they can only provide a small percentage of the energy demanded by our society and recommended that we reach out to contacts he has in the UConn school of business for an economic analysis of our system. He suggested that a device or concept similar to ours would be more applicable on a smaller-scale in remote areas as a way to harvest and store energy. Dr. Suib praised our out of the box thinking and encouraged us to keep exploring the possibilities for microbial electrosynthesis.

Peter Gunther is a Senior Research Fellow at the University of Connecticut and works as an economist. After learning that he had provided an economic analysis on a grant in 2010 that funded a biofuel facility, we set up an interview over phone. He recommended that we compare costs to see if BASSET is commercially viable. He suggested that we take a look at gas or liquid emissions and any effort in maintenance and collection. He brought up an important point that we should see whether the product would be used as an additive to gasoline or a substitute, like ethanol, and if it would be more or less efficient or cost-effective. Ultimately, we lacked enough data at the time to perform any of the analyses he recommended, but we received valuable insight into what we need to focus on when we continue the model.

Dr. Richard Parnas is a professor of chemical engineering who was involved with the Biofuel Conversion Experiment. Dr. Parnas gave insight into the big-picture view of our project, advising us to consider the economic viability of the biofuel that could be produced from our system. This would include considering our system if developed far into the future: what inputs would need to be provided to , and what outputs (both expected and from potential side reactions?) could come from our system? He also gave advice on the status of our team (as a growing group) - we should recruit more graduate students with experience in synthetic biology or applied design. Though this has been a point of growth for our team over the past year, we realized his point, that more guidance would be useful.

Dr. James Stuart is an analytical chemist who founded the Biofuel Testing Laboratory in the UConn Center for Environmental Science and Engineering in his retirement. We requested to interview him due to his vast knowledge of biofuel production and companies in the area. Dr. Stuart told us about the companies in the northeast area that went into biodiesel production as a green alternative to petroleum following government programs supporting successful biodiesel plants. In contrast from our biofuel production, these commercial plants used waste cooking oil as inputs to create a fuel which, when combined with petroleum, can act as a more environmentally friendly diesel fuel. Dr. Stuart’s role in this field was to put the biodiesel through a series of tests to ensure it met government-created standards. Although our biofuels are neither meant to be biodiesels nor commercially produced at this point, Dr. Stuart’s tests gave us insight on certain standards that biofuels should meet.

Making improvements on a device as complex as an MFC is not a clear-cut process. We could not test all the ideas we came up with during the brainstorming phase of our project, so we contacted an MFC expert, Dr. Lovley. Dr. Lovley was incredibly helpful and, when we explained our project ideas, he put us in contact with Dr. Walker, an ex-iGEMer himself. Part of our project originally involved expressing Geobacter sulfurreducens pilA in Shewanella oneidensis and increasing their conductivity by adding more aromatic amino acids to the structure. Dr. Walker made it clear, however, that these approaches were unlikely to be successful as there is uncharacterized missing molecular machinery to permit Geobacter PilA insertion into Shewanella and previous studies have failed to show improved conductivity with aromatic amino acids. This led us to the realization that we had to pivot, leading us to look into rMFCs and the cymA system.

This summer, we were mentored by the MIT iGEM team in making and using electrocompetent cells, making chemically competent cells, Golden Gate Assembly, and organization of the team. As a longstanding, experienced team, MIT has more experience in designing experiments and getting their projects from start to finish. Initially, we were struggling to get competent cells that would take up our parts. After speaking with MIT at the NEGEM meetup, they shared a useful protocol that, once used, yielded extremely competent cells that we used for the entirety of our project. In August, we were invited back to MIT, where we learned about chemically competent cells, Golden Gate Assembly, and general running of the team. We used the protocol and advice on chemically competent cells for our lambda red recombineering procedure, in which we had to transform cells multiple times with different plasmids to knockout two genes. This proved extremely important in our project as, without the knockouts, our MtrCAB system would have competed with other naturally-occurring pathways in the E. coli, decreasing its efficiency and effectiveness in the project. Additionally, MIT explained their work using the Universal Acceptor vector backbone with specifically-designed insert segments for easy assembly using Golden Gate. Although it was too late to use this for this year’s project as our parts were already ordered and partially assembled, we will be able to use this information, along with the toolkit they are designing this year, for future projects.

We were also mentored by the UToronto team, which provided advice on how to begin with a modeling effort for our team. Brayden and Fin gave direction on what items to start with. The first suggestion was a confirmation that our plan to study the kinetics of each of the enzymes was a reasonable place to start. This study would require both an estimation and/or literature search for each of the k values for each of the enzymes involved. Next, we discussed whether the loading/diffusion of phenazine shuttles was a limiting factor for the transfer of electrons between electrode and our engineered system. This aspect of our system could potentially be modeled using a random walk model of the electrons being transferred. Both these items could be used for our future work in modeling the MES system.