We decided to describe our system with deterministic modeling of ordinary differential equations that describe the molecular biology’s central dogma of gene expression inside the cell.

We used the law of mass action to describe the reactants equilibrium. Here we also considered that DNA concentration doesn’t change with time. 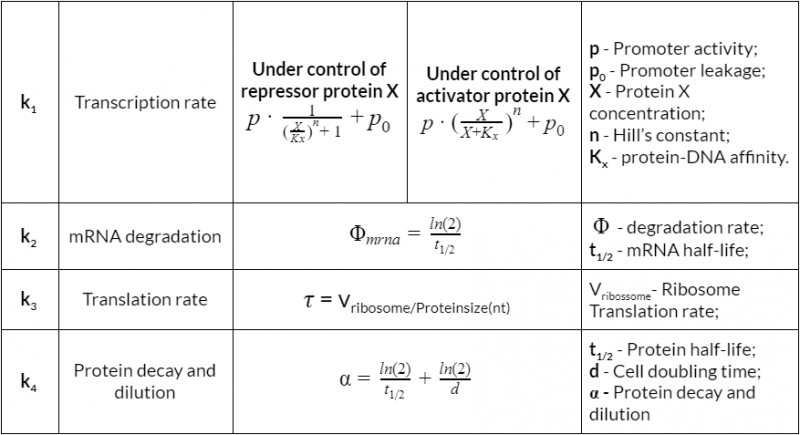 Here, we take the same assumptions as Kelly et al., 2018 (Supplementary Data), considering that bound sRNA-mRNA species have the shorter lifetime than unbound sRNA or mRNA (meaning that the complex degrades before having any chance to unbound), representing then, a first-order reaction.

Carbon catabolite repression (CCR) is a regulatory mechanism by which bacteria regulate the expression of functions for the use of secondary carbon sources in the presence of a preferred carbon source. In gram-positive bacteria, the CCR is mediated by the carbon catabolite control protein A (CcpA) that regulates genes of carbon metabolism when glucose is present in the system.
Our system is based on an anti-leakage orthogonal double repression framework, in which the insulin production is controlled by the expression of an orthogonal T7 polymerase, which is under Ptet control, a promoter repressed by TetR repressor protein. Our designed sRNA prevents leaked Insulin mRNA translation from happening. Finally, both TetR and sRNA’s gene expression are under glucose activated CcpA control, possessing CcpA binding sequence ‘cre’. 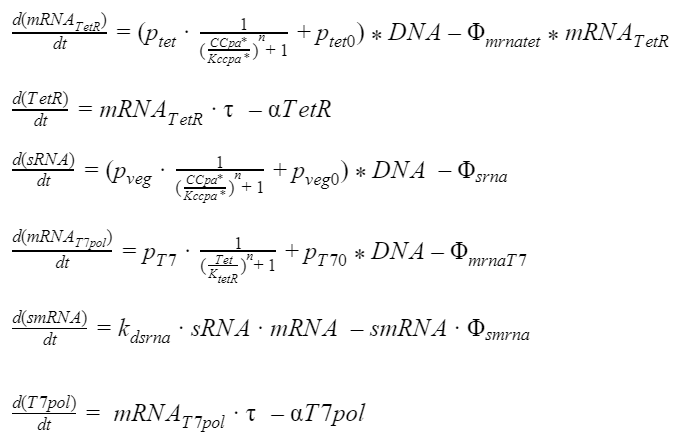 This module is composed of two genetic circuits that ensure that our system won’t produce any insulin when glucose is absent. TetR is a repressor protein responsible for blocking T7 polymerase expression, which is the only enzyme responsible for insulin gene transcription, under PT7 promoter control. Our designed sRNA aims Insulin’s mRNA, that can be produced by ptet leakage, aiming for complete repression control against insulin production in absence of glucose. Here ptet, pveg and pT7 denotes promoter activity, ptet0, pveg0 and pT70 describe promoter leakage; DNA represents DNA copy; Φmrnatet, Φsrna and Φmrnat7 RNA degradation rates; αTet and αT7pol proteins degradation and dilution rate and KCcpA* and KTet are affinity DNA-Repressor protein affinity constant.

When creating a simulation, we don’t always find the exact parameter value that we are expecting (we even have different sources providing completely different values for the same thing). That’s why sometimes it’s necessary to make some assumptions and estimations in order to reach the most realistic results.

We’ve designed this circuit to be integrated into the chromosome as a single copy set of genes.

Promoter activity and leakage have a strong gene and biochemical context dependency, which makes parameter setting extremely difficult to elaborate. In our simulations, we assumed that ptet and pveg have the same activity, while pT7 possess double of its promoter strength (assuming its known high promoter activity). We also determined that promoter leakage would represent 20% of the total promoter activity.

Here, we reimagined CcpA activation by glucose, by following similar kinetics and parameters to the CAP (Gram-negative carbon catabolite repression protein) and cAMP reaction. Furthermore, we considered a total amount of 350 CCpA molecules per cell(1 molecule per cell = 1nM/cell).

We used MATLAB software to solve the ODE system and simulate the system dynamics, using ode15s solver. ETH Zurich Team helped us a lot with the coding and also with some modeling advice. After taking a look at our first code and model, they sent us some tips to improve our model and a more elegant version of the code, making it easy to manipulate parameters and variables. They also shared materials about stochastic modeling, that will help future attempts on modeling our circuit or future projects.
Click here to download our simulation files

sRNA influence in the circuit:

After building our model and starting the parameter setting, we concluded that the sRNA-mRNA affinity constant (Kdsrna) has a high influence in the circuit response. Then, we decided to analyze how different values would influence the Insulin expression when the system is on and off, by looking at the Blocking efficiency (%):

Blocking efficiency (BE) denotes for the percentage of insulin blocked by the circuit in the glucose absence in different Kdsrna values.

The first graphic shows that the sRNA Blocking efficiency decreases as Kdsrna increases and the high BEs happens when the sRNA affinity is lower than 0.1.

Glucose ON and OFF

We first ran our circuit response in glucose presence and absence 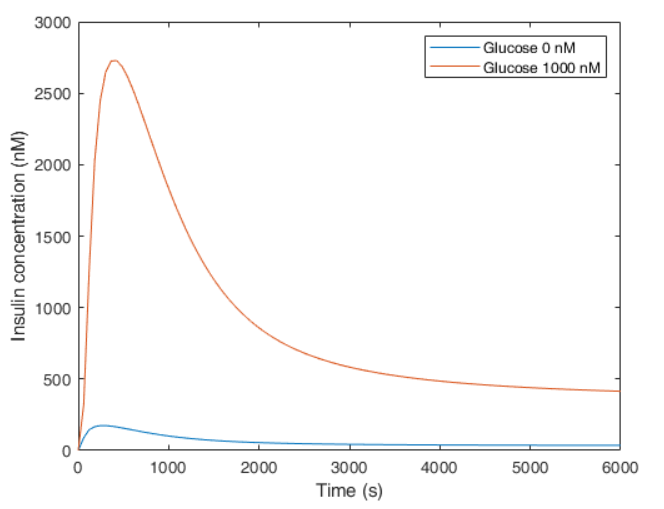 This results provided the circuit time response around 5.8 minutes reaching steady-state after 66 minutes.

We tested our circuit response to different glucose concentrations, as shown in the graphic below: 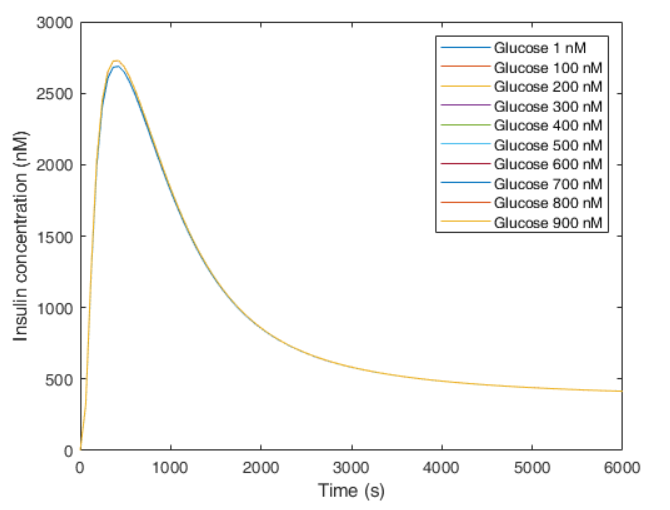 Different concentrations of glucose don’t make a relevant difference in the insulin amount according to our model. This is an undesirable characteristic in our circuit since we want our system to respond proportionally to the glucose amount. This results can be explained due to our oversimplification of the CcpA activation by glucose that, in reality, involves active transport and different enzymatic conversion thought the chassis metabolism before the activation of CcpA itself. Avoiding this steps turns glucose into a simple inductor of the circuit and ignores the fact that it participates actively in the chassis metabolism and growth, which may cause the model to exhibit variations when compared to experimental data. For future improvements of this mathematical modeling, we could add the glucose uptake and glucose participation in metabolism in order to fix this problem.