We were very happy to know people and collaborate with teams from all over the world this year! We collaborated with teams from Europe, Asia and America that helped us with modeling, research about laws and engineered probiotics and, of course, contributed to making a happy and fun iGEM season!

This was the first time our team has ever tried to create a gene circuit’s mathematical modeling and simulate it with MATLAB. That means that we had to start from the very beginning, learning from genetic circuit modeling basics to MATLAB coding with no previous experience at all! After learning the basics of coding and creating our model, we still had many questions about it, and that’s when ETH Zurich Team arrived!
In our first Skype meeting, we talked about our genetic circuit modeling and simulation but also about our projects. After the meeting, the Zurich team reviewed our model and MATLAB code, sending us an useful material about stochastic modeling (that will help future attempts on modeling our circuit or future projects), a simpler and more elegant version of our coding (making it easier to edit), helpful modeling tips, with interesting advice on which parameter we should look at in order to best describe our circuit. In our last Skype meeting, we discussed last changes in the model.

This collaboration was incredibly helpful for building our model and simulation, and to discuss our results. Thanks a lot, ETH Zurich! 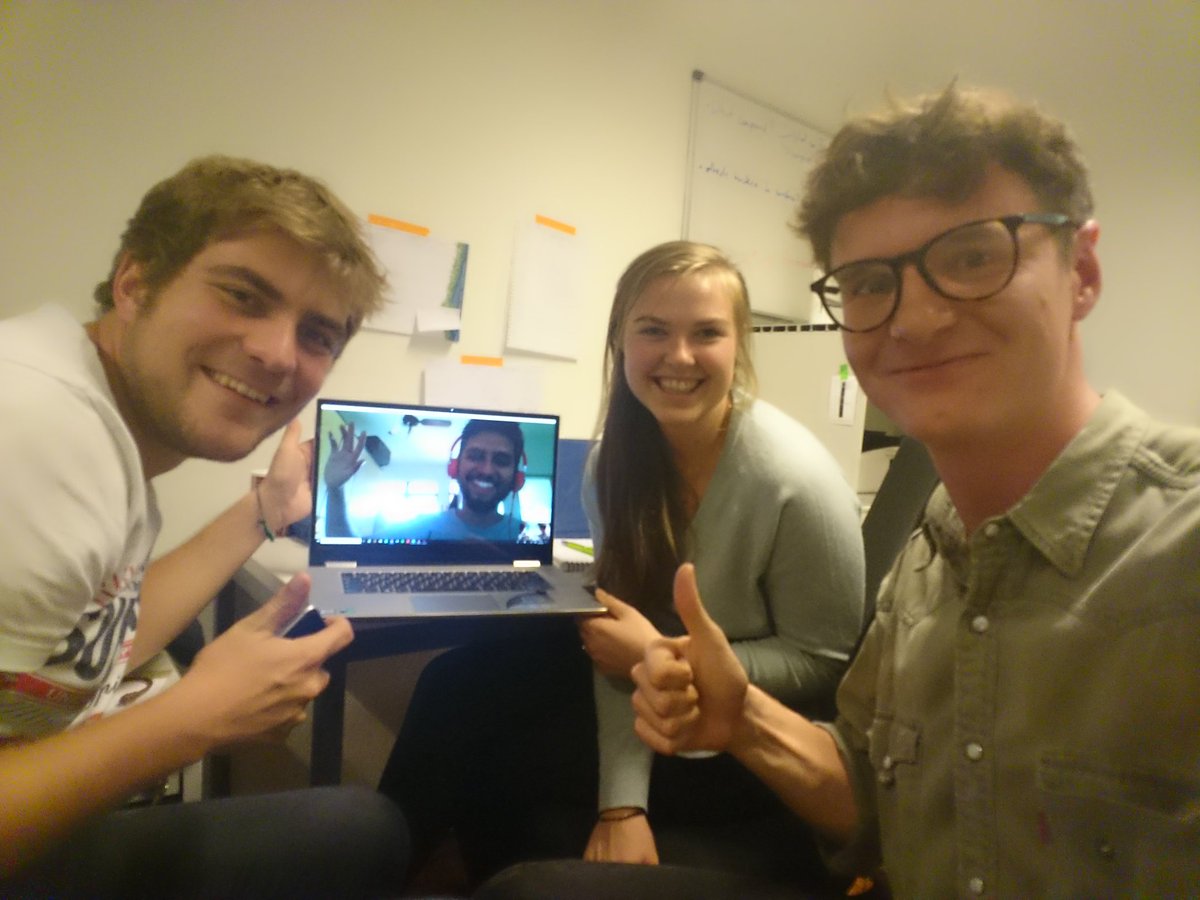 iGEM TecCEM had the amazing idea of creating a parody of “Girls Like You” and “Moves Like Jagger” by Maroon 5 called “Labs Like You” and “Moves Like iGEM”, which we agreed to participate for sure! Besides, we also got in touch to talk about our projects and did some research for each other. TecCEM’s project is about healing burns with biological materials, so we look into researches, data about burns and available treatments in Brazil and sent them. In exchange, they looked for data about engineered probiotics and regulation in Mexico.

Engineered Probiotics Around the World

Our goal with this collaboration was to understand about the GMO legislation around the world and if there already is any regulations about engineered probiotics and if there are clinical trials or companies using engineered probiotics in these countries. This work was done in collaboration with teams Chalmers-Gothenburg, IIT Delhi, Jiangnan China, TecCEM and Lambert. Thank you very much for all of the teams for your research!

In China, there is no regulation for genetically engineered probiotics, the present tests in the country approach pathogenic potential, and patronized standards for food evaluation. No companies or clinical trials that uses engineered probiotics has come to our knowledge.

In India, the ICMR (Indian Council of Medical Research) in partnership with DBT (Department of Biotechnology), created an official guide to evaluate probiotics in the country, so any probiotic product needs to be on this guide´s pattern to be released in the market.
Before being approved and released, food is submitted to standardized tests for identification and characterization of its new chains, such as PCR, in vitro tests mimicking the gut environment, in vivo testing to check the effectiveness in live animals, safety assessment for human use, evaluation of efficacy in humans, also there are standards patterns that need to be followed for the process of food packing and management.
Currently, the probiotic market in India is dominated by multinationals, which mainly commercialize fermented food products. No companies or clinical trials that use engineered probiotics has come to our knowledge.

In Mexico, all food that has been processed or produced by genetically modified organisms are considered transgenic, but food containing GM or transgenic compounds are not identified, even though there are biosecurity laws and norms for regulation, such as SEP, CIBIOGEM, SAGARPA, SEMARNAT, SHCP and the Federal Law for Protection of the Consumer.
In terms of the norm, the Official Mexican, Norm NOM-056-FITO-1995, is in force and regulates everything related to GM mobilization in the country, so all public and private company must fulfill the requirements in the norm to have their food with genetically engineered compounds transit through Mexico. Furthermore, the law of Biosecurity of GMO and the Federal Law for Protection of the Consumer controls the release for consumption and commercialization of pilot projects besides regulating importation and exportation of GM in the country. No companies or clinical trials that use engineered probiotics has come to our knowledge.

In Sweden every substance or combination of substances that is provided under the pretense that it has a preventative or therapeutic effect on diseases in humans or animals states for a pharmaceutical, which is regulated by the Swedish Medical Products Agency (MPA). When this kind of probiotic is been prepared to be released the Swedish Gene Technology Advisory Board and the Swedish National Council of Medical Ethics are often involved and give out statements and input in regards to the applications for clinical trials. There all pharmaceuticals that contain any modified organism need to be labeled with “This product contains (a) genetically modified organism(s)”, and all of the trials regarding GM pharmaceuticals are posted on the Swedish Medical Products Agency’s website. In Europe, the following companiy working with engineered probiotics has come to our knowledge: ActoBio Therapeutics (part of Intrexon) in Belgium.

Engineered probiotics are not regulated by the US Food and Drug Administration, as they are neither a food nor a drug. As a result, they currently do not require large clinical trials like other drugs in America.
The followeing companies working with engineered probiotics has come to our knowlegde: Azitra, Synlogic and ZBiotics.

Besides the research about probiotics in China, we collaborated with Jiangnan China by helping them with the safety of their project. They needed help in designing a kill switch and, because we were both working with probiotics, they asked us some ideas. We shared with them information about our kill switch and also other strategies used for biocontainment.

iGEM Toulouse created an Instagram page called “iGEM Around the World”that was managed by different iGEM Team every week. We participated and there we shared pictures about our city, our College, our team and our project. It was really nice to show a little bit of our daily life and also to know the routine of other iGEM teams!

In collaboration with the other Brazilian teams (USP-SP and USP-EEL) and also former and future iGEM teams, we organized and participated in the Brazilian Meetup at USP-ESALQ, Piracicaba-SP. There, we presented our 2017 projects and our projects for 2018, also we had several lectures with synthetic biology experts including international speakers Drew Endy, David García Gomez, Thomas Landrain and companies like Braskem and SENAI-CETIQT. 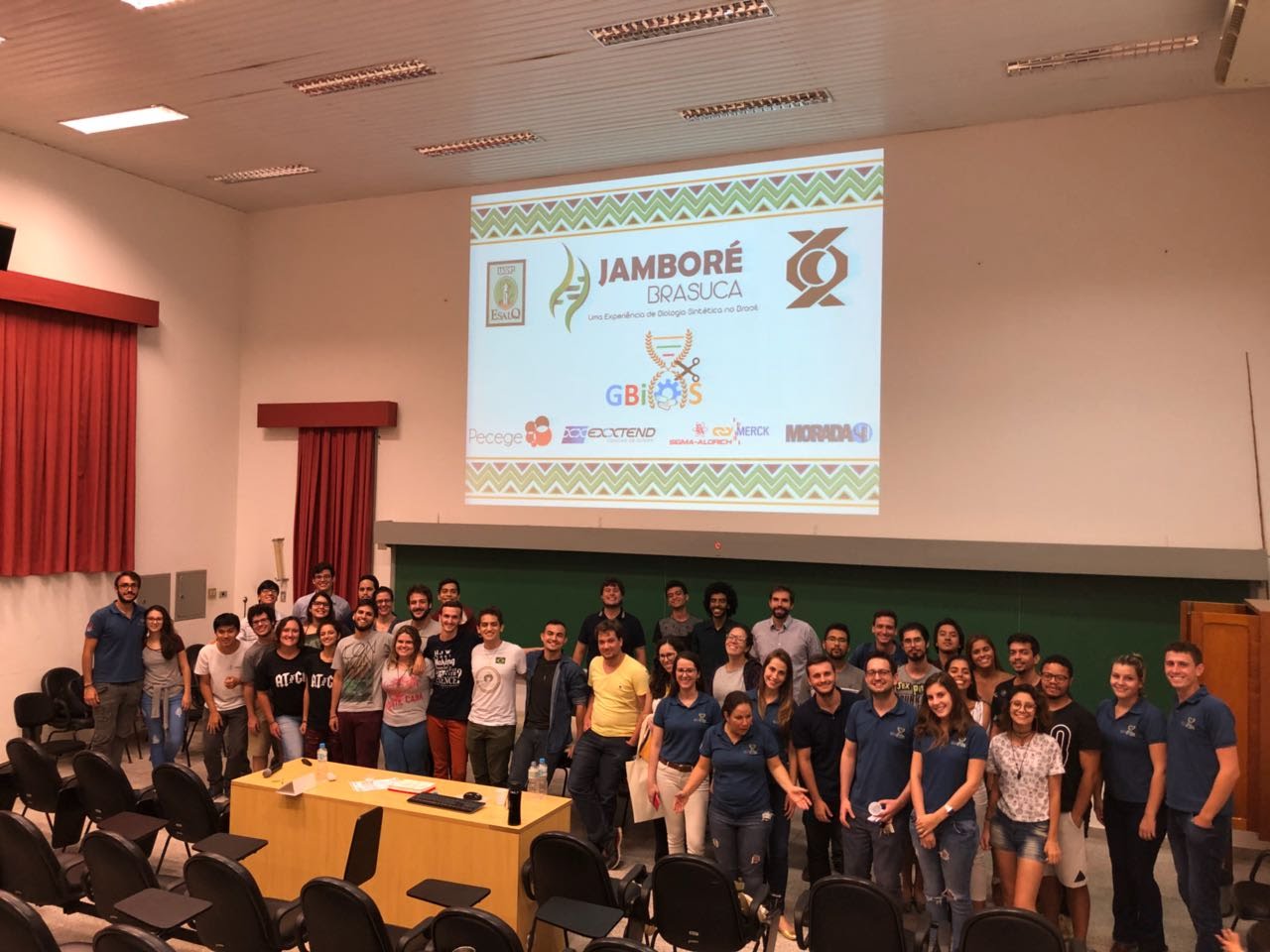