The fifth InterLab study has launched and it further attempts to develop a standard procedure for green fluorescent protein (GFP) measurements to reduce variability across laboratories in the world. This year the attempt is to normalize fluorescence measurements to colony forming units (CFU) instead of optical density of the culture since it is a great source of variability among labs. Two approaches were used to compute the cell number in the samples:

Counting CFU in the samples.

At firstly, we measured absorbance (Abs600) of weakly scattering LUDOX CL-X to obtain a multiplication factor of Abs600 to transform absorbance values to the comparable OD600 units.

Following that, we prepared serial dilutions of monodisperse silica microspheres and obtained standard particle curve (Fig. 1) which allows to convert Abs600 measurements to an estimated number of cells. 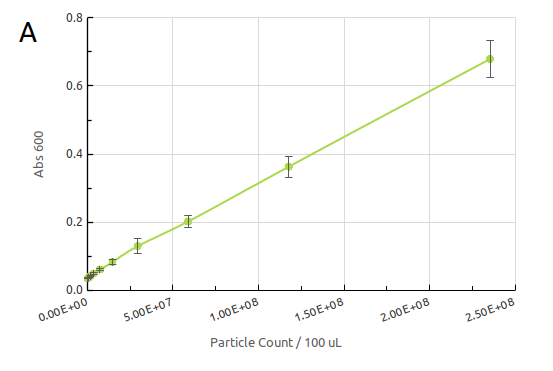 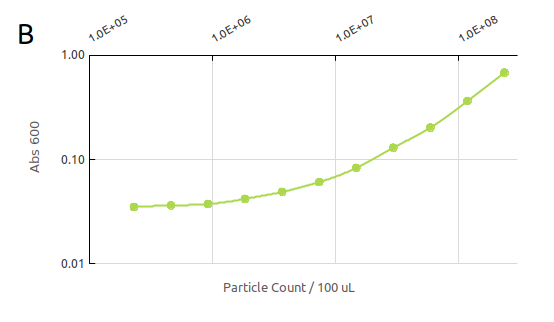 Figure 1. Standard particle curve obtained by using microspheres that are similar size to a cell displayed in (A) a linear scale and (B) a log scale. 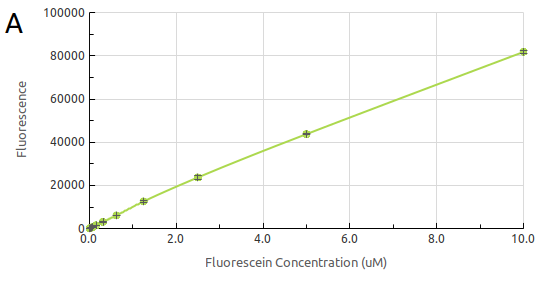 Figure 2.
Fluorescein standard curve obtained by serial dilutions in (A) the linear scale and in (B) the log scale. 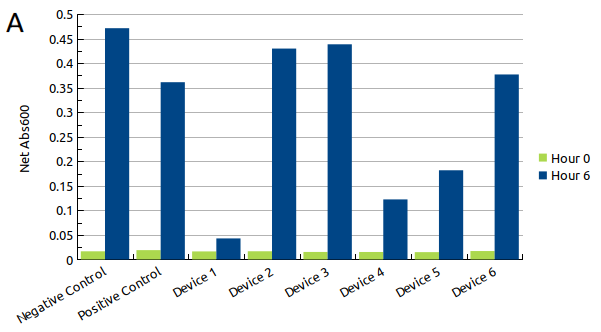 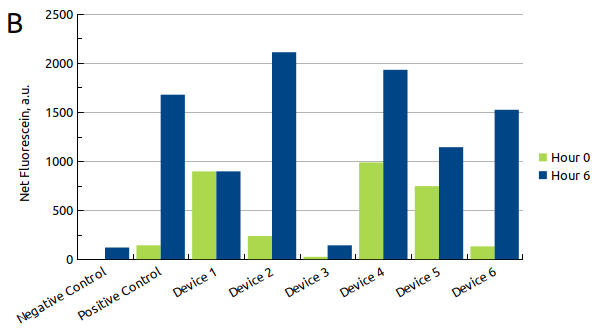 Figure 3.
Average absorbance (A) and fluorescence (B) measurements of the 2 colonies and 4 replicates for each sample, taken after 6 hours of growth.

The negative control demonstrates the highest absorbance which could be the result of the lowest metabolic load of all the devices, since it has no GFP expressed. On the other hand, devices 1, 4 and 5 show much slower bacteria growth even though the fluorescence of these devices is not the highest. Furthermore, device 1 demonstrates a really moderate absorbance and fluorescence increase after 6 hours suggesting that environmental factors could have impeded sample growth.

Next, the previous data (absorbance and fluorescence) was normalized to the comparable OD units (Fig. 4A) and then to particles (Fig. 4B) so that we could determine the mean expression level of GFP per cell. 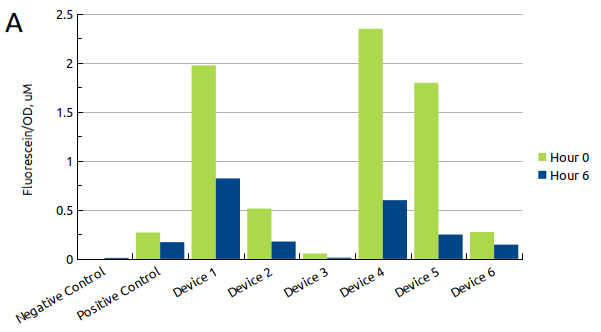 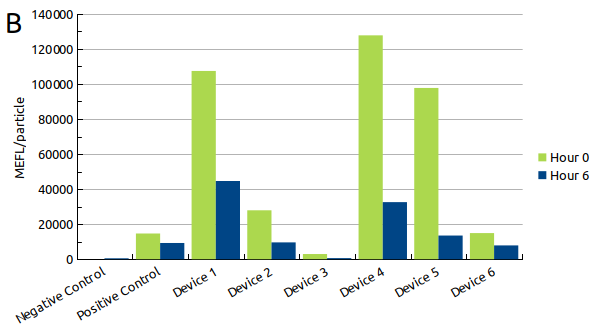 Figure 4.
Normalization of fluorescence to the OD units (A) and MFEL per particle (B).

After 6 hours all the devices (except the negative control) demonstrates a relatively decreased level of fluorescence. That could be explained by cells reaching a certain level of GFP expression after which the fluorescence stops increasing whereas absorption steadily goes up.

The second approach is to calibrate OD600 to CFU which reflects the cell count in the sample. For this approach only negative and positive controls were used.

The overnight cultures of two colonies per control were diluted to OD600=0.1 (three replications) and serial dilutions were made which then were spreaded on agar plates. The next morning the colonies were counted to find out the number of cells in the samples.

NC 1.1 and PC 1.2 samples has shown relatively high and low values respectively comparing to other samples which could indicate a systematic error in a serial dilution step.

In this study cell fluorescence depends on the strength of the promotor under which GFP was expressed. However, all the cells with different devices demonstrated a reduced fluorescence per cell after 6 hours indicating a slowed down GFP production.