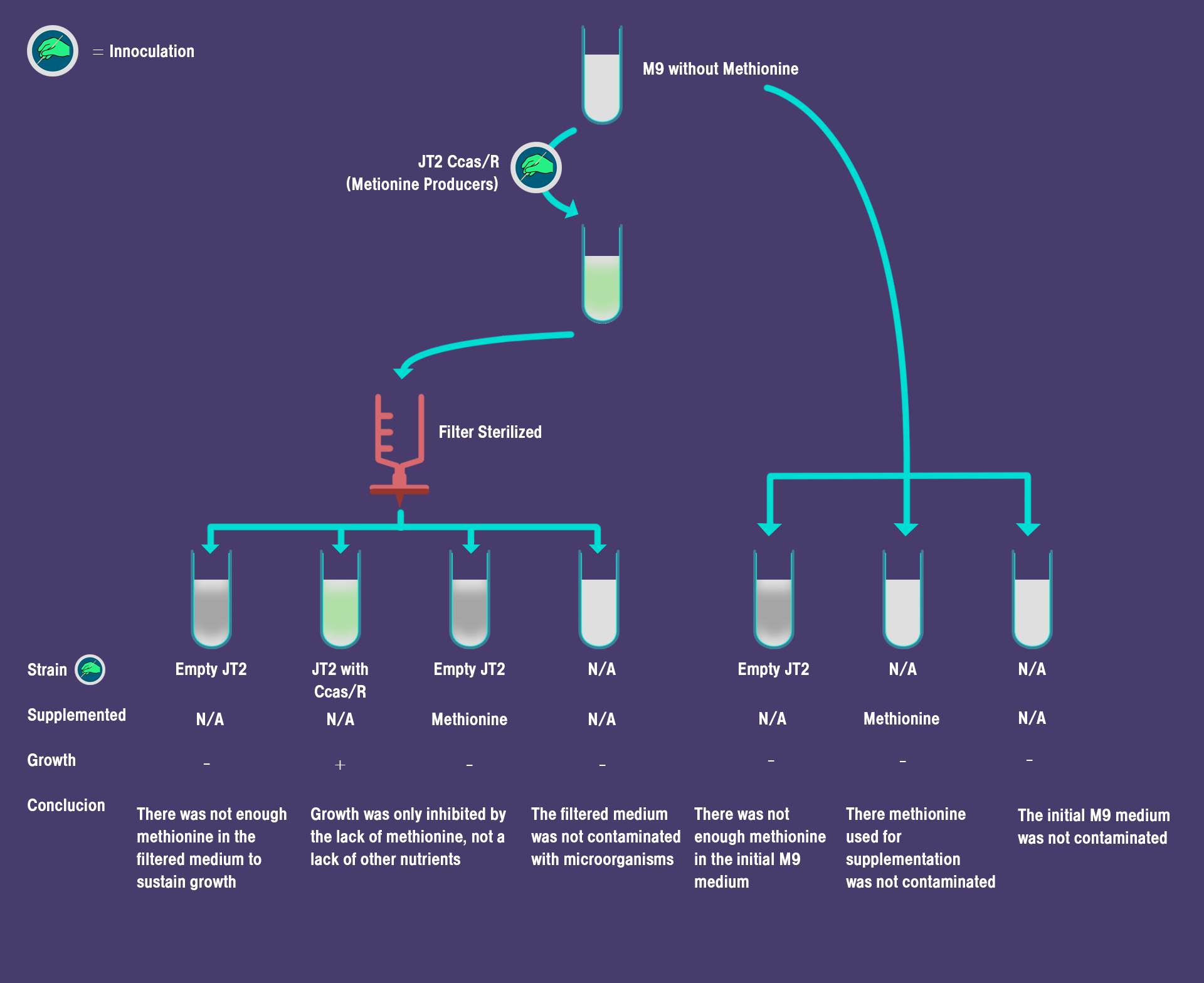 Multiple trials went underway for the growth of empty JT2 in knockout MetE media to definitively confirm that the predicted results occured in regards to CcaS/R JT2 and empty JT2 growth. As the goal of the experiment was to assure that there was no “leaking” of methionine from the CcaS/R JT2 cells when stimulated with methionine production, leaking that could support the growth of another population. The following test matrix was performed to assess the possibilty.

As can be seen from the chart, the experimental trial, in which the CcaS/R JT2 strain was grown and removed from the methionine knockout media, had no growth once empty JT2 was introduced into it. This was an encouraging result as it suggested that there was little or no “leaking” of methionine produced by the CcaS/R JT2 during growth into the media, and thus the empty JT2 did not have any means to grow.

The minor growth of CcaS/R JT2 as a positive in control in trial 2 was expected, and was done to confirm that there would be no adverse factors from the removal of CcaS/R JT2 that were causing the introduced empty JT2 to not be able to grow, and that the composition of the media was static.

Trial 4 indicated no growth as expected. This was carried out, with the removal of the CcaS/R JT2 and addition of the antibiotic, to confirm that all the bacteria was being taken out and that no other bacterial contamination was what was being seen in the positive control tests that had reported growth.

Trial 5 similarly was carried out with stock M9 to assure no environmental contamination was in the media from the beginning, especially bacteria that required external methionine to grow.

Trial 6 was carried out as a negative control to assure that the stock media itself was not contaminated with any nutrients that could be used by the empty JT2 to grow. This was important as it is possible that trace amounts could have been consumed in the other trials by the CcaS/R JT2 bacteria and thus were not reflected in the experimental trial.

Finally, the 7th trial indicated that the empty JT2 strain that was in this bacteria was healthy and could grow in the desired conditions within the M9 media, with the methionine and the KM from stock solution.

Four sample tubes of JT2 CcaS/R-containing cells in M9 were made, and all were placed in the turbidostat. The samples were made by inoculating the cells off a plate into complete M9 made with casamino acids as the amino acid source.

Two samples were grown under only red light, and two under only green light. The samples were optically insulated from each other. The cells were allowed to grow for 3 hours to acclimatize them to the light conditions they were being kept under.

See pages 77 to 79 in the online lab book for additional details.

In order to automate experiments and make the designed system more useable, the team set out to create a "robot" capable of measuring cell fluorescence (and hence co-culture composition). See the "Automation" page for full details.

For our proof of concept, we wanted to use two populations of E. coli: slow growing DH5alpha with a GFP marker and light controllable JT2 with CcaS/R. Before creating a co-culture with these two populations, we needed to determine how they behave on their own.

Before trying to create a stable co-culture, we had to confirm that we could control the growth of a single population of E. coli. This was done by replicating the experiments from the paper.

In order to replicate the experiments from this paper we had to develop a new protocol that would work for the equipment in our lab. This took many trials and troubleshooting until we developed our final protocol (please refer to our experiments page for more information on this)

Below is a graph showing the growth rate of JT2 Ccas/R under three different intensities of green light, 24%, 48.8% and 100%. Increased green light exposure resulted in increased growth rate. This is what we expected to see based on the results from the paper.

Note on light set up:

100% green light: green light is on 100% of the time during the span of the experiment

24% green light: green light is on 24% of the time during the span of the experiment 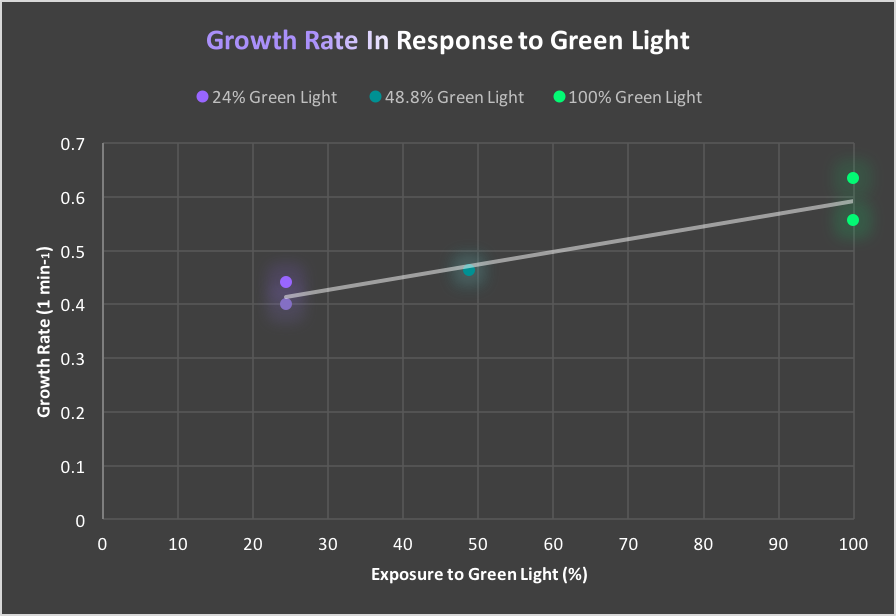 Each Point represents the growth rate of a single tube of JT2 Ccas/R under 24%, 48.8% OR 100% green light. Growth rate was measured in duplicates for each light intensity.

We wanted to dig a little further into the cell’s response to changes in light intensity. To do this we measured the level of GFP expression for each population under different intensities of green light (using a flow cytometer). Increased exposure to green light resulted in increased GFP expression. These correlates to increased CcaS/R activity and MetE expression.

Note: GFP is used as a proxy for MetE expression because they are both under a CcaR promoter in all characterization experiments. 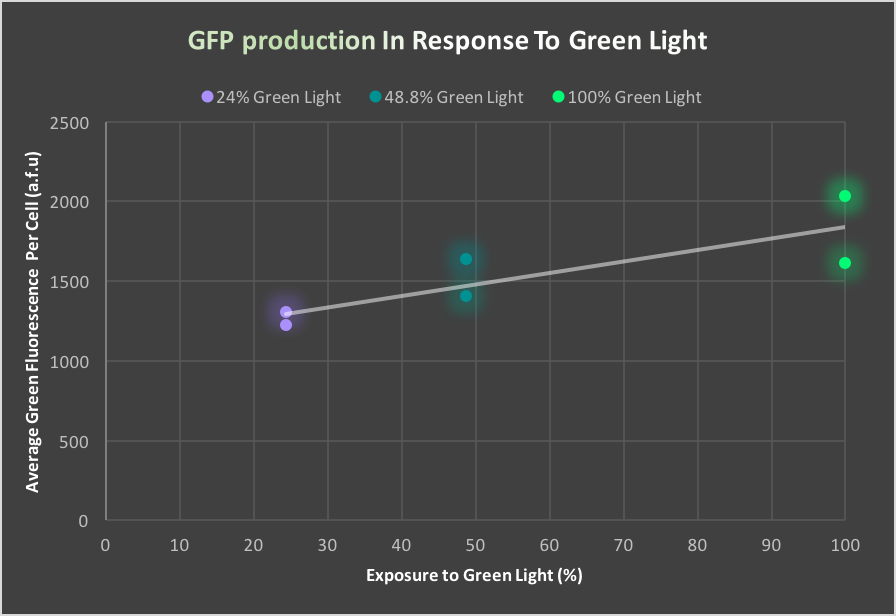 Limitations of Our System

When comparing doubling times of replicates done on different days a significant amount of variation is seen between samples. However, when comparing replicates on the same day they match well. 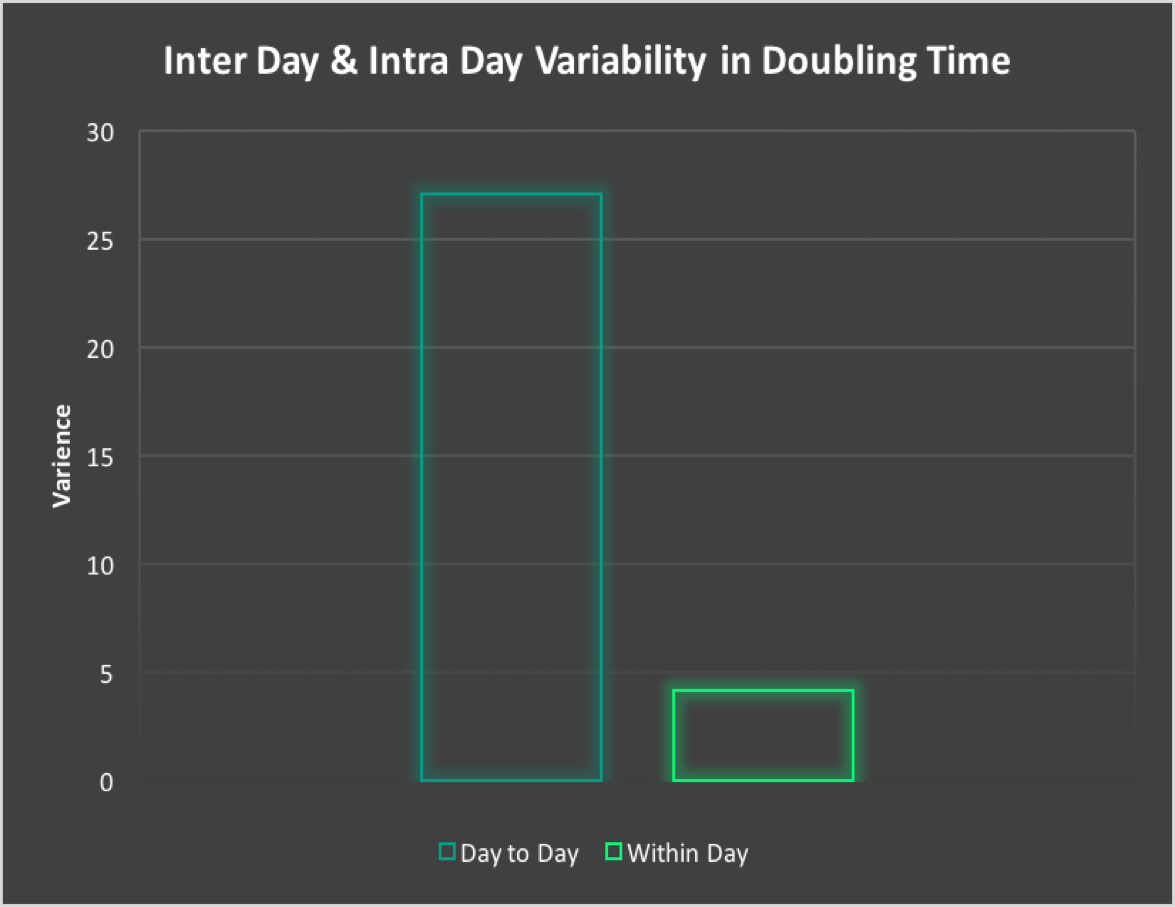 Solution In order to compensate for this day to day variation we will have to implement our Specific Model Predictive Controller. This model uses an optimization technique known as Moving Horizon Estimation (MHE). The control algorithm will take into account the day-to-day variability and adjust accordingly in order to still perform optimally.