The TERRA Adapter is a scalable, predesigned chip that is capable of selectively dispensing the output of the microfluidic chip running the experiment into the intended lab vessel. The TERRA Adapter serves to increase the number and types of microfluidic chips that are compatible with our system. This makes the system more user-friendly, as users don’t need to design a chip that both performs both a biological experiment and proper output selection. For droplet-based experiments, the TERRA Adapter has two valves and a set of four pressure regulators per output. In continuous flow experiments, there are two valves for every output and an extra output that serves as a flush mechanism for cleaning the nozzle between outputs, but no pressure regulators. After both discussing with Fraunhofer and Phenomyx about the lack of standardization in the microfluidic industry and evaluating the advantages of making our system compatible with commercial microfluidic chips, we made the output selection mechanism its own chip - the TERRA Adapter. Output selection is a necessary part of TERRA because the system needs direct control over when the output of the microfluidic chip is dispensed. This control is vital because the flow into the chip is continuous, whereas output must be noncontinuous. The TERRA Adapter allows for great flexibility in the experimental chip as it can be either user-designed or bought commercially, and does not require a built-in output selector. 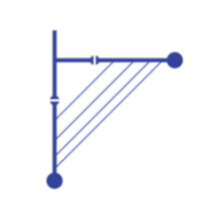 Output Selector with Pressure Regulators
The first features resembling a TERRA Adapter were the valve-based output selectors used the initial versions of our proof of concept chips. An output selector is a combination of two valves and two ports that work in tandem. When one valve is open, the other is closed. This means the input only goes to one of the two outputs at any one time. When the valves are actuated, the liquid is redirected to the other output. Using this concept, our simple two-valve output selector system controls when an input is flowing to waste and the output nozzle, allowing direct control over when the output is dispensed. The output selector used in the 4-Pressure Regulator chip is identical to those in the finalized branches of a droplet-based TERRA Adapter.
Click here to learn more about our proof-of-concept chip for cell-free expression: The TERRA Adapter works for both droplet-based and continuous flow microfluidics. For droplet-based experiments, the TERRA Adapter has two valves and a set of four pressure regulators per output. The pressure regulators serve to minimize the disruption in droplet generation on the experimental chip due to the pressure difference caused by the actuation of the valves in the output selector. In continuous flow experiments, there are two valves for every output, there are no pressure regulators, but there is an extra output that serves as a flush mechanism for cleaning the nozzle between outputs. Below are some TERRA Adapters that our team has created so far:

We have open-sourced the designs of the TERRA Adapter and added them to the 2017 iGEM BostonU Hardware team, MARS', repository of microfluidic chip designs. Here are the SVG files for each design and its corresponding description and fabrication and assembly documentation.

The TERRA Adapter is scalable following radial symmetry about the nozzle output, as seen in the diagram below. The continuous flow TERRA Adapters also follow this symmetry but an extra branch has to be added to each design, except that of a single input, to serve as a flush to clean the nozzle between outputs. 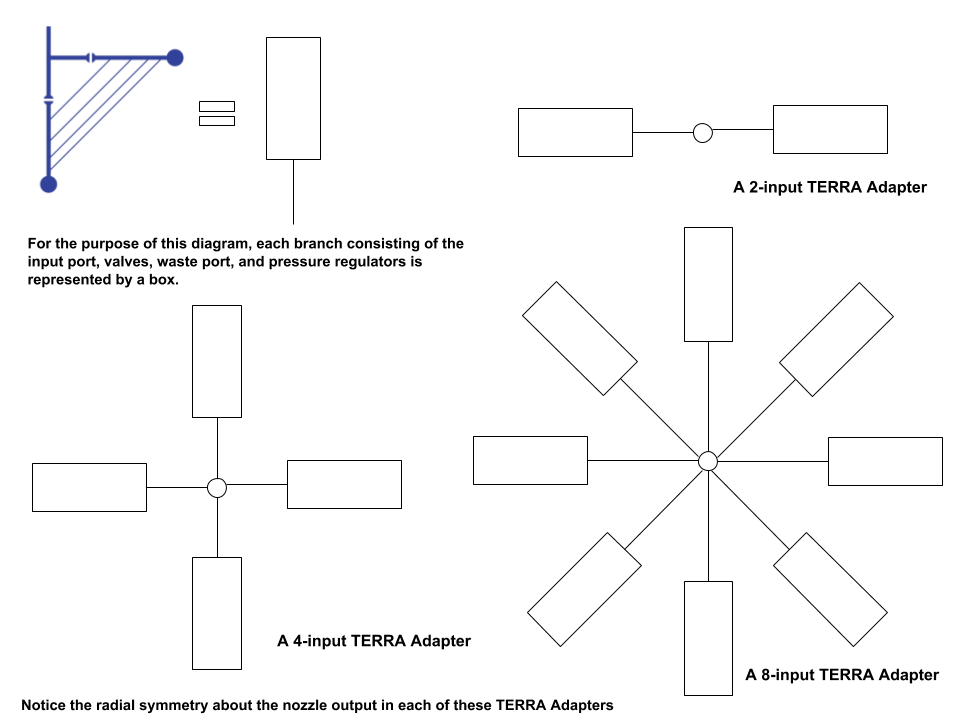