Our team has created an exploratory model of a metabolic pathway for the enzymatic degradation of TCDD. This model served as the foundation of our project design and the backbone for our lab work. We completed in depth research on enzymes families relevant to TCDD degradation, narrowing down contenders to the enzymes we would eventually use in the lab. While building this model, we utilized a multitude of tools including, but not limited to biochemical analysis, phylogenetic comparison and pathway mapping. Through these tools, we compiled a comprehensive list of enzymes, is strongly rooted in prior academic studies. 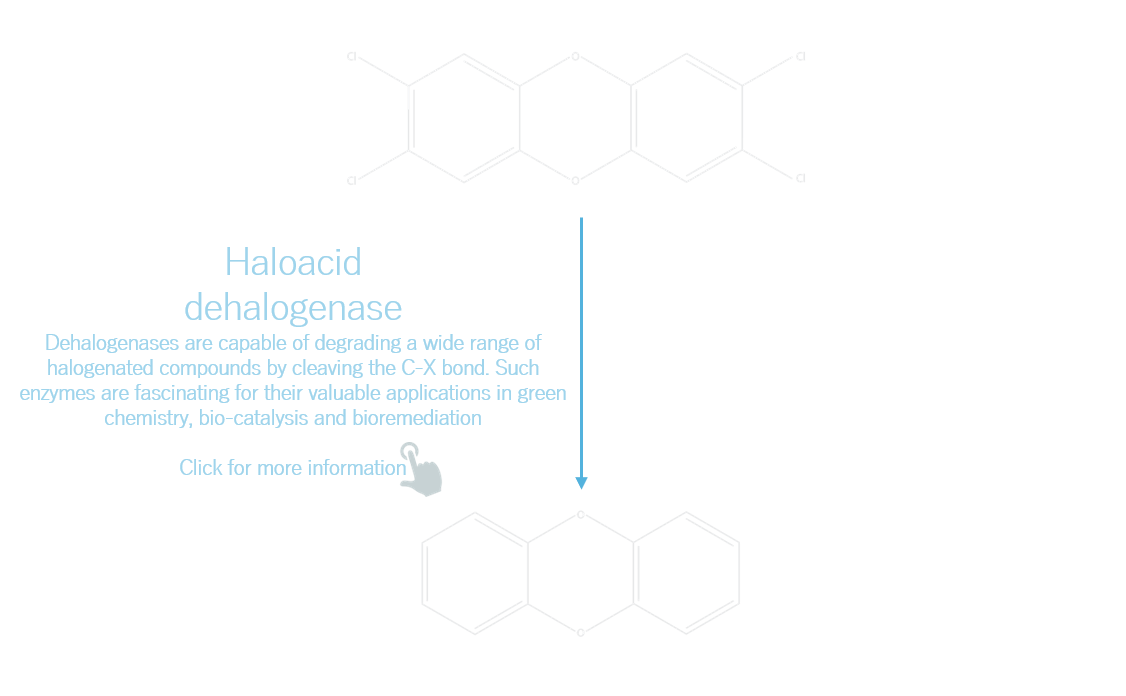 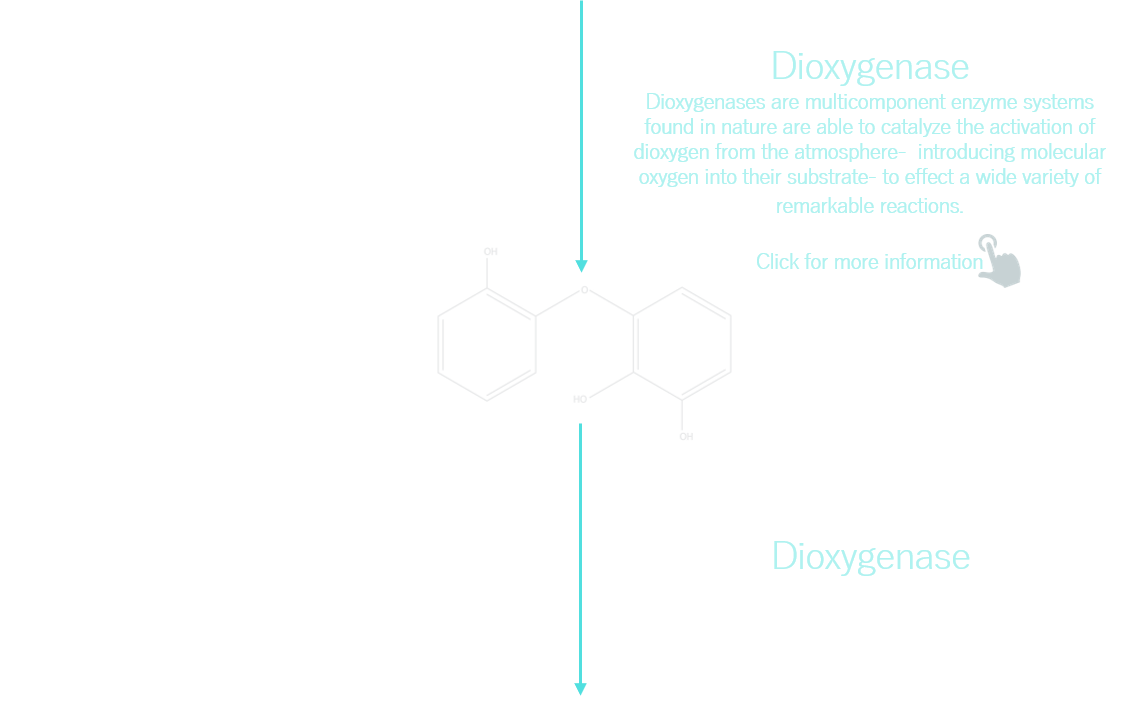 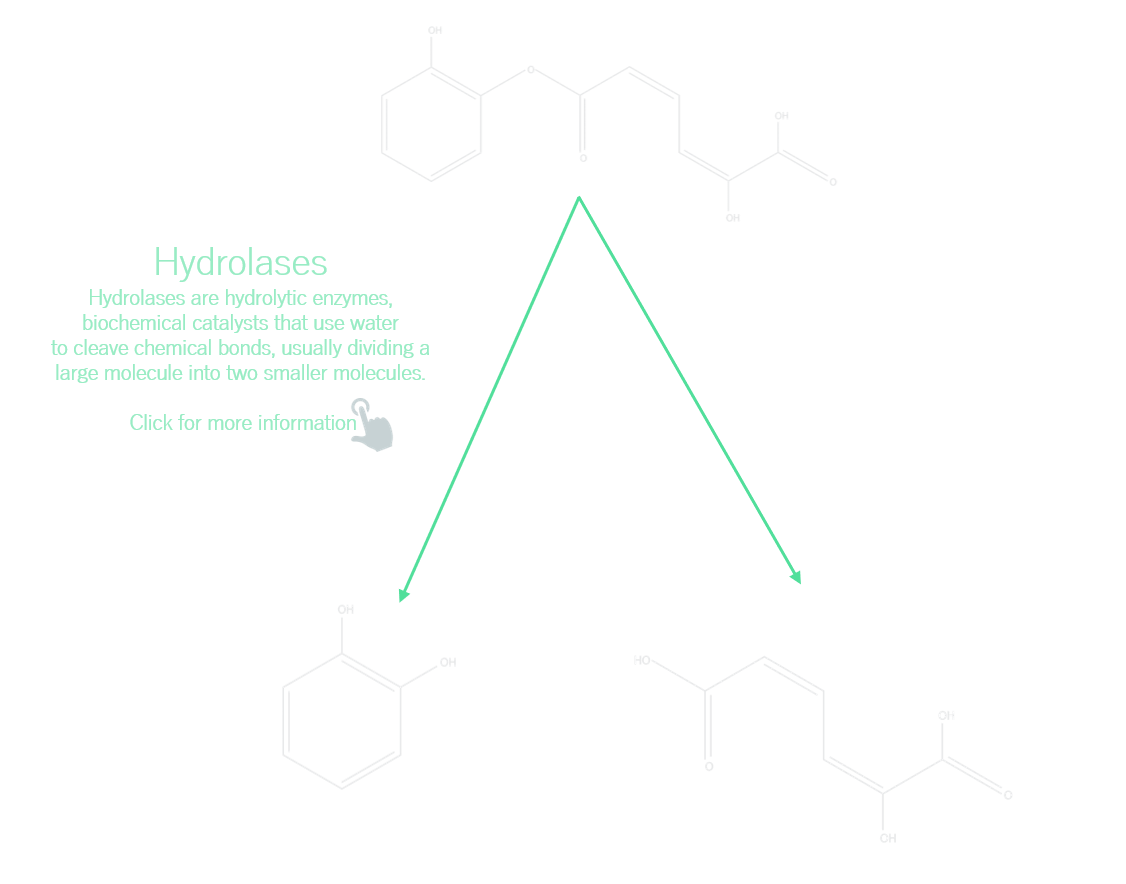 The final pathway we tested in the lab, consists of dehalogenase, dioxygenase and hydrolase enzymes. Additionally, Cyp 450 and Lignin Peroxidase enzymes were researched, enzymes have been previously found to breakdown TCDD. Despite that neither of these enzymes catalyze a specific step in the final engineered pathway, both are excellent candidates for TCDD Degradation. 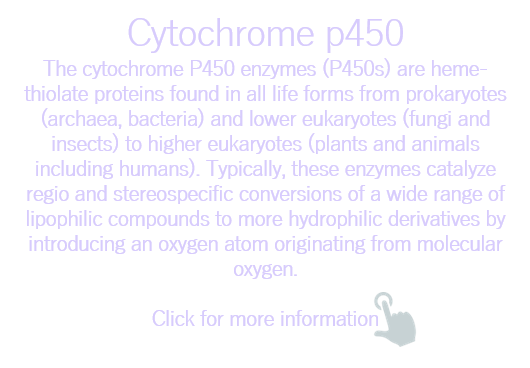 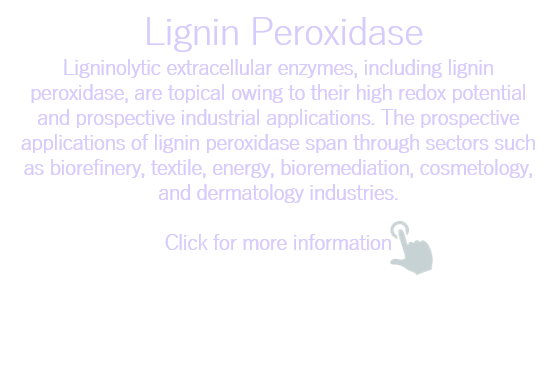 According to the Fig. mechanism, a carboxylate group of the enzyme acts as a nucleophile to attack the a-carbon of L-2-haloalkanoic acid, leading to the formation of an ester intermediate. This is hydrolyzed by an attack of the water molecule activated by a basic amino acid residue of the enzyme. Alternatively, water is activated by a catalytic base of the enzyme and directly attacks the a-carbon of L-3-haloalkan6ic acid to displace the halogen atom (Fig. 2B). 2

Collectively, the involvement of P450s has been proven in the metabolism of aliphatic, alicyclic, and aromatic molecules in reactions resulting in hydroxylation, epoxidation, dealkylation, sulfoxydation, deamination, desulphuration, dehalogenation, and N-oxide reduction. The majority of P450s catalyze the reactions after interacting with one or more protein components which transfer electrons from NADH or NADPH to the P450s, while some of them do not require any additional protein components to achieve the reductive activation of oxygen. While bacterial CYPs are water-soluble, mammalian CYPs are bound to either ER or mitochondrial membranes. 1,2

Though human CYP's showed the ability to breakdown PCD's, it appeared that they were unable to utilize 2,3,7,8 TCDD as substrate. By contrast, CYP450 deriving from canines have showed some ability to catalyze hydroxylation of 2,3,7,8-TCDD. In 2003, an article published by Kyoto university, described a single amino acid mutation [F240A] which allowed a rat CYP enzyme to catalyze TCDD dechlorination in E. coli.3

Aromatic hydroxylation reactions of arenes, 7, are catalyzed by P450. The initial product is a reactive arene epoxide, 8, which then undergoes an interesting rearrangement (NIH shift) to yield a reactive keto 2,4-diene intermediate, 11. This reactive intermediate rapidly undergoes a tautomeric shift of a proton to restore aromaticity.

Cytochrome P450 monooxygenases (P450s) represent the largest enzyme family of the plant metabolism. Plants typically devote about 1% of the protein-coding genes for the P450s to execute primary metabolism and also to perform species-specific specialized functions including metabolism of the triterpenes. The members of the subfamilies CYP51G, CYP85A, CYP90B-D, CYP710A, CYP724B, and CYP734A are generally conserved across the plant kingdom to take part in plant primary metabolism related to the biosynthesis of essential sterols and steroid hormones. However, the members of the subfamilies CYP51H, CYP71A,D, CYP72A, CYP81Q, CYP87D, CYP88D,L, CYP93E, CYP705A, CYP708A, and CYP716A,C,E,S,U,Y are required for the metabolism and might perform species-specific functions including chemical defence toward specialized pathogens.4

Cytochrome P450 monooxygenases of fungi are involved in many essential cellular processes and play diverse roles. The enzymes catalyze the conversion of hydrophobic intermediates of primary and secondary metabolic pathways, detoxify natural and environmental pollutants and allow fungi to grow under different conditions. Fungal genome sequencing projects have enabled the annotation of several thousand novel cytochromes P450, many of which constitute new families.  Previous reports demonstrated that the white-rot fungus P. chrysosporium has been shown to possess biodegradative capabilities 2,3,7,8-TCDD. The degradation of more highly chlorinated DDs by P. chrysosporium has also been demonstrated. Based on the fact that P. chrysosporium genome contains 148 CYP genes, it is possible to assume that some P. chrysosporium CYPs are involved in the metabolism of PCDDs. Unfotunately, The specific 2,3,7,8-TCDD-metabolizing enzyme has not yet discovered in P. chrysosporium.2,5

Bacterial CYP102A1 is a water-soluble fusion protein between CYP and NADPH-P450 reductase containing FAD and FMN. Interestingly, CYP and the reductase domains of CYP102A1 are significantly homologous with animal CYP and its reductase, suggesting it maybe the eukaryotic origin of CYP102A1 (Omura 2010). These cytochromes are involved in the synthesis of secondary metabolites, such as antibiotics, in the utilization of hydrophobic low molecular substrates, such as alkanes and aromatic carbohydrates. These enzymes also have monooxygenase activity towards different organic low molecular substrates. Cytochromes C450 play an important role in the degradation of environmental toxins and mutagens. The hydroxylation activities of these enzymes towards PCDDs are much lower than those of mammalian CYPs.1

Many of these reactions have little or no precedent in organic chemistry. Di-oxygenase and mono-oxygenase enzymes that are able to activate dioxygen are divided into oxidases, which use oxygen as an oxidant, and reduce dioxygen to hydrogen peroxide or water; and oxygenases, which incorporate oxygen atoms from dioxygen into the product(s).Dioxygenases incorporate both atoms of oxygen into the product(s).

Oxidization of Dibenzofuran, a dioxin like molecule we used in the lab1 1.

Most dioxygenase enzymes require a metal cofactor, which is most often iron(II or III). Dioxygenases primarily oxidize aromatic compounds and, therefore, have applications in environmental remediation. Dioxygenases serve as part of nature’s strategy for degrading aromatic molecules in the Environment. They are often found in the soil bacteria as well as almost all higher plants. Dioxygenase enzymes are used for a multitude of separate steps in the pathway described. 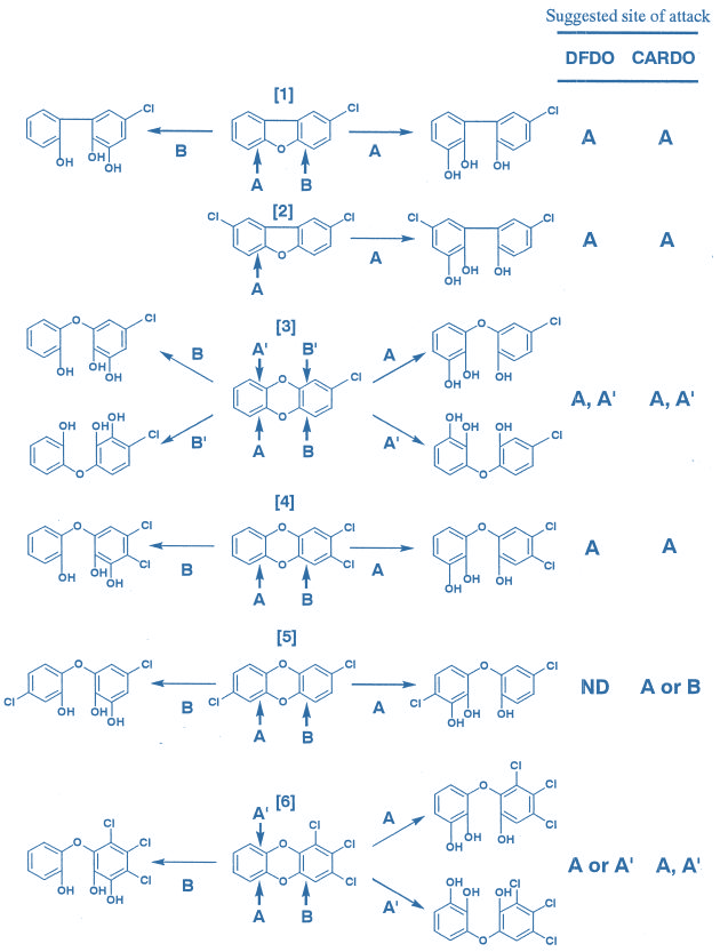 Numerous studies have been done on a number of Dioxygenase enzymes, and their ability to degrade dioxins:


Hydrolases are hydrolytic enzymes, biochemical catalysts that use water to cleave chemical bonds, usually dividing a large molecule into two smaller molecules. Examples of common hydrolases include esterases, proteases, glycosidases, nucleosidases, and lipases. Hydrolases carry out important degradative reactions in almost all organisms. These enzymes have a catalyze reactions in a multitude of biological processes including digestion and neurotransmitter degradation in animals, bacterial cell-wall growth, and extracellular degradation of cellulose, xylan, and chitin, in fungi. 1,2


White rot fungi, the fungi responsible for the biodegradation of lignin in wood, are remarkable in their ability to degrade a wide variety of environmental pollutants. Insoluble, generally very recalcitrant chemicals are mineralized by the fungi. The fungi also mineralized (oxidized to CO2) some chemicals that are already highly oxidized. In general it is thought that this biodegradative ability is related to the ability of these fungi to degrade lignin. This ability, which is unique to white rot fungi, is thought to be dependent on a family of peroxidases secreted by the fungi; however, a purely oxidative, peroxidase- based system cannot be used to completely degrade lignin. Lignin is highly oxidized so it is difficult to oxidize further. Lignin is a complex heteropolymer with no stereochemical regularity, due at least in part to the free radical mechanism of synthesis. Lignin biodegradation must therefore involve a nonspecific and non-stereoselective mechanism.

The lignin peroxidases are somewhat unique in that they have higher oxidation potentials (- -1.35 V) than do most peroxidases ( -0.8 V). In this way these enzymes have a somewhat greater range of chemicals that they can oxidize. Due to this none specific, and highly effective oxidation abilities, Lignin peroxidase is an excellent candidate for bioremediation- not only for dioxins, but a wide range of aromatic pollutants.1 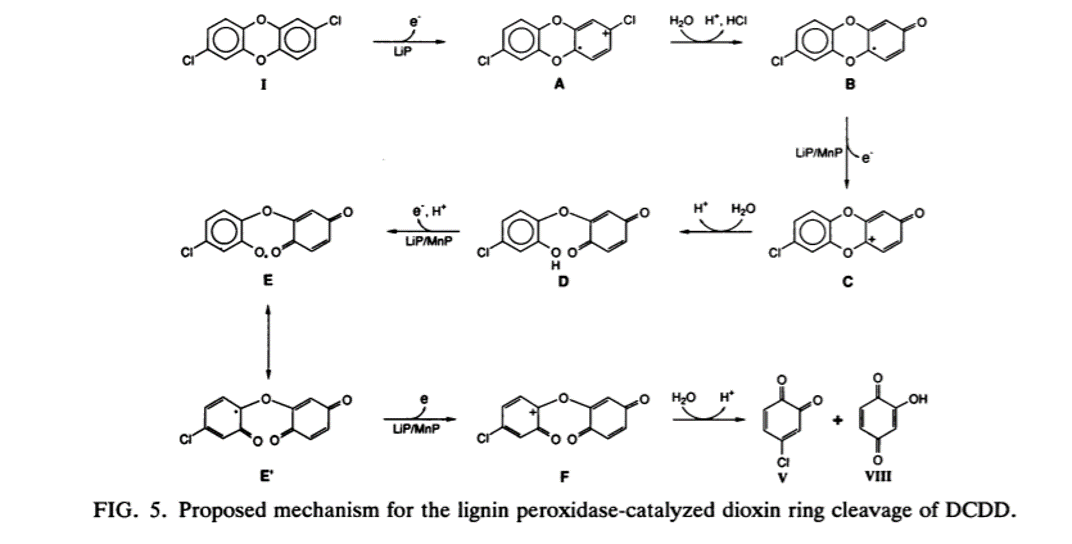 Attack of H20 at the cation would result in the loss of chloride and the formation of the carbon-centered radical intermediate B. One-electron oxidation of B by LiP or MnP would result in the formation of the cation intermediate C. Attack of H20 on intermediate C would lead to the first C--O-C bond cleavage and the formation of the quinone intermediate D. Subsequent oxidation of the phenolic function of D would generate the phenoxy radical E, which is in resonance with the carbon-centered radical E'. Oxidation of E' by either LiP or MnP would yield the cation F. Finally, attack of H20 on the cation F would result in the cleavage of the second C-O-C bond and generation of 4-chloro-1,2-benzoquinone (V) and 2-hydroxy-1,4-benzoquinone (VIII). In the metabolic pathway, both chlorine atoms are removed from the aromatic rings as chloride before ring cleavage takes place. This is advantageous because the possible formation of toxic chlorinated aliphatics is avoided. Indeed, peroxidasecatalyzed oxidative dechlorination followed by reduction of the quinone products results in the introduction of phenolic groups, which facilitate subsequent ring opening. Similar peroxidase-catalyzed oxidative dechlorinations of polychlorinated phenols have been reported.
We propose that a similar metabolic pathway is probably involved in the fungal degradation of TCDD and have initiated studies to examine its metabolism.2