The principle of the design was to have the left segment of the toehold contain a sequence complementary to miRNAs known to be emitted during human disease processes. The remainder of the toehold was based on a scaffold created in the Alexander Green et al 2014 paper. The central part of the toehold contains a palindromic repeat that anneals together, forming the main hairpin area, which allows for translation to be stalled. The top of the hairpin contains a ribosome binding site sequence. The bottom right side of the toehold contains a start codon and a linker sequence, which extends into the suppressed gene, in this case Cas13a. Upon binding of the complementary miRNA, the toehold collapses, allowing translation of Cas13a to begin. When Cas13a has been translated and becomes a functional protein, it requires a guide RNA, present in the solution, before its nonspecific RNAse activity can begin. After the guide RNA is discovered by the enzyme, the Cas13a cuts RNA indiscriminately. An RNAse detector kit is used in this phase, which includes RNA bound to fluorescent probes along with fluorescence quenchers. When the RNA is cut, a fluorescent signal is produced.


Components of a toehold switch 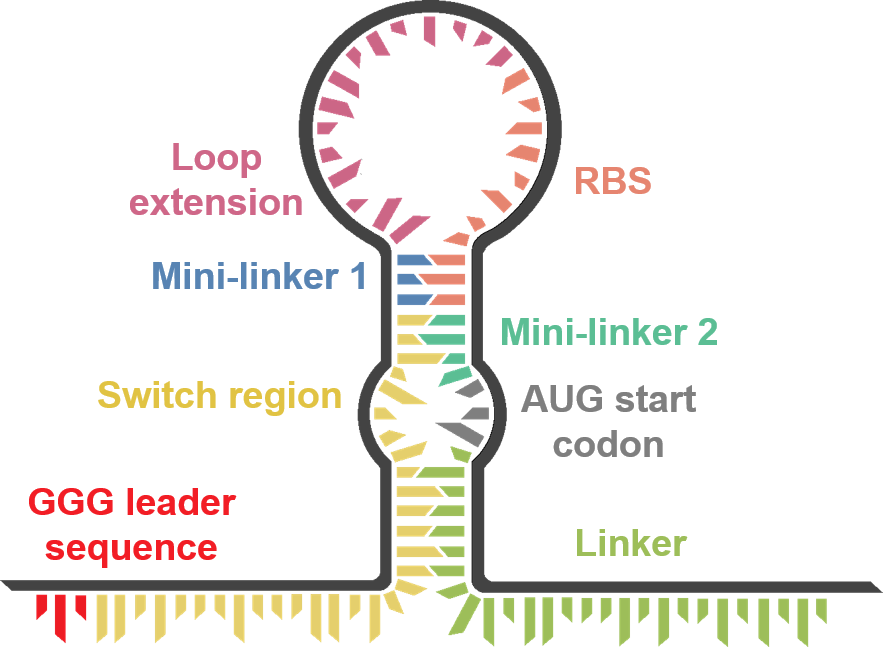 Note that this is based on the above design:

In this case, the 15 nucleotide sequence is complementary to a miRNA sequence linked to breast cancer, hsa-miR-100-5p

The forward primer sequence was GGGCACAAGTTCGGATCTACGG, while the reverse primer sequence, complementary to that of Cas13a based on the completed toehold switch sequence, was ctttgcgctgccgcca. These sequences are all in DNA nucleotides as in the original design, oligonucleotides were intended to be converted into RNA by means of a kit