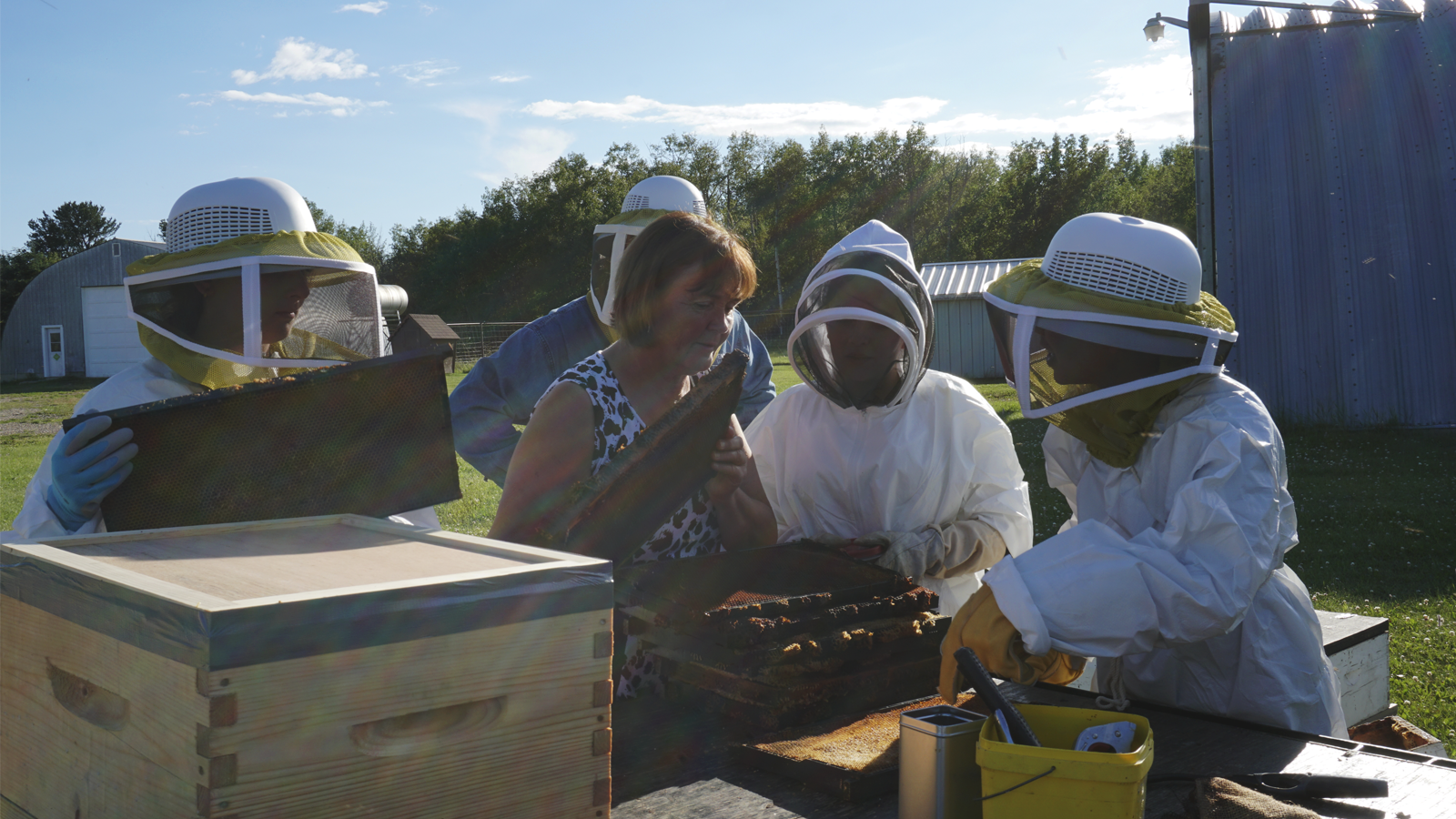 Over the course of this iGEM season, with parallel efforts in both our bee lab and synbio lab to maximize our limited time, Team UAlberta was able to perform key experiments that together serve as a proof-of-principle demonstration that our system works, which we will recap here. For full experimental results, please proceed to the results section for the bee and synbio lab

Our solution to addressing N. ceranae infection is predicated on two hypotheses:

To address the first hypothesis, we performed two experiments. Our first experiment involved overexpressing 5-aminolevulinic synthase, which has been previously shown to be sufficient to drive PPIX production, in DH10B to see if PPIX can be produced as the literature suggests [1]. We extracted porphyrins secreted in the media and characterized them via fluorescence spectroscopy and thin layer chromatography. The similarities of the fluorescence and TLC results between our stock (Enzo Life Sciences) and extracted porphyrins strongly suggest that overexpressing the enzyme encoded by HemA alone is sufficient to drive porphyrin production - specifically PPIX production.

Secondly, given that the heme biosynthesis pathway is endogenous to E. coli, we wanted to ensure that the overexpression of 5-aminolevulinic synthase does not just lead to the overexpression of all the other enzymes in the pathway. That is, we wanted to ensure that the enzymes in our pathway alone are sufficient for PPIX production. Therefore, we performed an experiment wherein we incubated the purified enzymes encoded by HemA to HemF with some 5-ALA - the product of 5-aminolevulinic synthase-37°C overnight. While we acknowledge that this experiment would be better performed by incubating succinyl-CoA and glycine (5-aminolevulinate synthase’s starting materials [1,2]) with the enzymes instead of 5-ALA, 5-ALA was more economically available. Furthermore, we believe that our previous experiment showing the overexpression of 5-aminolevulinic synthase can lead to PPIX production dispels any uncertainty regarding the functionality of the first step in this pathway. Our results show that the fluorescence spectrum of the extracted porphyrins from the purified enzymes is similar to the spectrum from the stock. Though we were unable to confirm it, the middle peak in the emission spectrum may be due to incomplete conversion of an intermediate to PPIX.

While work was being done to express PPIX in our bacteria, we needed to ensure that the PPIX would have the desired effect of diminishing spore load in the bees without having a significant toxic effect on the bees.

To address PPIX-spore-bee interactions, we set up a PPIX feed experiment. We collected six cages of about 30-45 bees from our team hive. Given the difficulties associated with collecting bees, it was not possible to know exactly how many bees we had in each cage while they were alive. We administered different conditions whereby two cages were control cages, two were solvent system feed, and two were PPIX substituted feed. One cage in each treatment contained healthy bees whilst the other contained N. ceranae infected bees. It is important to note that after the N. ceranae infection was initiated in the bees, they were given one day to recover while being fed sugar water and to let the infection settle into their system before commencing the treatment. The experiment was started the next day. The bees were appropriately segregated to avoid cross contamination and were subsequently monitored for 10 days. Every 24 hours, any dead bees were collected and catalogued while the conditions of each cage were documented. Bee activity and behaviour was also documented during these check-ins. Observations included: bee activity level, cleanliness, appetite and general health appearance.

For the control group, the sugar feed consisted of 2M sucrose solution administered through 15 ml plastic centrifuge tubes with holes in the bottom. The solvent system feed was going to inform whether the bees could tolerate the PPIX solvent (1:1 0.1 M Tris and 10 mg/L EtOH) in their feed. It was administered in a 50:50 ratio with the sugar feed in the same way as the control bees. Essentially, the administration route needed to be confirmed as viable and non-toxic to the bees. As for the PPIX substituted feed, we were observing whether PPIX did indeed have a role to play in diminishing N. ceranae spore counts in the bees. To observe PPIX spore interactions, we mixed equal parts sugar feed and 50 mg/L PPIX (80 μM) in the solvent system. This was fed in the same manner as the other conditions.

After the experiment was concluded, 25% population triplicates of bees were collected from every experimental group and counted. To count spores in bees, we homogenized the bees in PBS (in a 1ml PBS: 1 bee ratio), filtered the resulting liquid and counted the spores via standard hemocytometer techniques.

What we found was that the PPIX solvent system was well tolerated by the bees and did not manifest in any observable signs of toxicity. It also had no effect on spore inactivation on its own. Additionally, we observed a statistically significant decrease in nosema spore counts in PPIX treated N. ceranae infected bees when compared to the sugar fed control bees. The treatment decreased spore loads to a healthy threshold. There was a 2 order of magnitude decrease in spore loads between PPIX treated infected bees and control infected bees (from millions of spores to tens of thousands of spores). This experiment confirmed the hypothesis that PPIX is effective in reducing N. ceranae spore load.