Today, Genetically Modified Organisms are still met with great opposition. As research continues to expand our understanding of genome editing and synthetic biology, the UGA iGem team hopes to influence the narrative against GMO's. This project studies and expands upon various expression systems found in plants that could potentially impact human health through nutritional enhancements. In addition, environmental conditions can be catered to through GMO’s by decreasing dangerous pesticide usage, increasing yield and decreasing land use, reducing carbon dioxide emissions, and even saving species.

To address the attitudes and efforts in implementing genetically modified organisms in agricultural products, we have developed a series of policy questions to explore the issue.

2. What regulations are in place regarding the use of genetically modified organisms (do they have to have a kill switch? Are there certain types of modifications such as increased nutrition value vs pesticide resistance that require different laws?
The United States does not have any federal legislation that is specific to genetically modified organisms (GMOs). Rather, GMOs are regulated pursuant to health, safety, and environmental legislation governing conventional products. The US approach to regulating GMOs is premised on the assumption that regulation should focus on the nature of the products, rather than the process in which they were produced.
A crop is genetically engineered to carry a gene for a Bt toxin, EPA requires the developer to verify that the toxin is safe for the environment and conduct a food-safety analysis to ensure that the foreign protein is not allergenic.
FDA is responsible for regulating the safety of GM crops that are eaten by humans or animals. According to a policy established in 1992, FDA considers most GM crops as “substantially equivalent” to non-GM crops. In such cases, GM crops are designated as “Generally Recognized as Safe” under the Federal Food, Drug, and Cosmetic Act (FFDCA) and do not require pre-market approval. If, however, the insertion of a transgene into a food crop results in the expression of foreign proteins that differ significantly in structure, function, or quality from natural plant proteins and are potentially harmful to human health, FDA reserves the authority to apply more stringent provisions of FFDCA requiring the mandatory pre-market approval of food additives, whether or not they are the products of biotechnology.9
https://www.loc.gov/law/help/restrictions-on-gmos/usa.php https://fas.org/biosecurity/education/dualuse-agriculture/2.-agricultural-biotechnology/us-regulation-of-genetically-engineered-crops.html

3. How do regulations on GMO’s in agriculture differ between developed and developing countries?
India
Last year, the Food Safety and Standards Authority of India (FSSAI) told the Supreme Court that genetically modified foods are not allowed in the country even though no official action has been taken against taking out GMOs from the Indian markets.
US
The United States contains the most GMO crop area at 73 million hectacres. GMOs go through a rigorous regulatory process to ensure that they are safe to go into markets. The regulatory process can last for three or more years and must be examined by regulatory agencies around the world such as the EPA, FDA, and USDA.
Brazil
Brazil follows the United States in the most GMO crop area. The National Biosafety Council actually establishes policies that defines and outlines general rules for GMOs and laboratories that work with them. ¬¬¬Essentially, GM products must go through five different stages before they can be sold. Before products can be marketed, they must be assessed politically by a council of eleven ministers who decide whether or not a certain product is advantageous or not
Senegal
The country of Senegal supports the research and implementation of GMOs and biotechnology because there is no doubt that GMOs can help meet current challenges, such as food insecurity, public health issues, natural resource conservation, and climate change. As long as biosafety measures are set in place by the ANSTS (National Scientific and Technical Academy), Senegal is behind the production of GMOs.
South Africa
South Africans supposedly are unknowingly consuming genetically modified food products every day, some without their knowledge or consent. Approximately 99% of soya and 84% of maize in this country is GMO. There have been many health related issues that have come out, but The Health Department does not have a position.
Peanuts are grown in the warm climates of Asia, Africa, Australia, and North and South America. The United States has about three percent of the world acreage of peanuts, but grows nearly 10 percent of the world’s crop because of higher yields per acre. The rest of the world’s peanut production comes mainly from Argentina, Brazil, Malawi, Nigeria, Senegal, South Africa, and Sudan. World peanut production totals about 29 million metric tons per year. The United States is the world’s third largest producer, after China and India. Worldwide peanut exports are about 1.25 million metric tons.

3. Are farm subsidies affected by use of GMO’s?
The federal government does not pay farmers to grow GMOs. Two agriculture subsidies exist, the first being that the federal government helps farmers manage risk in many ways such as disaster assistance, market volatility, and it even pays for the cost of crop insurance. The second type of helps farmers by providing financial incentives to adopt conservation practices of invest in projects that improve the environment. The current farm policy actually provides incentives for farmers not to use GMOs by funding marketing programs such as the National Organic Standard.
4. What are the current attitudes towards use of GMO’s in these different countries?
The attitudes in India seem to be very against GMOs, but no action is being done to remove products off shelves regardless on their prohibition against these organisms. The citizens of Brazil and the United States seem to be somewhat hesitant in allowing GMO production; however, the United States is leading in the most GMO crop area and production. The policies established in the United States indicates that scientists are excited to see where this area of research could led, but still wish to be precautious.

We also went to teach at a summer camp for middle school students about synthetic biology concepts, ranging from basic biotech procedures to biology lessons regarding the central dogma. We also shared experiences and advice with the students, both from Lambert and those attending the camp, about our experiences with college life/research. 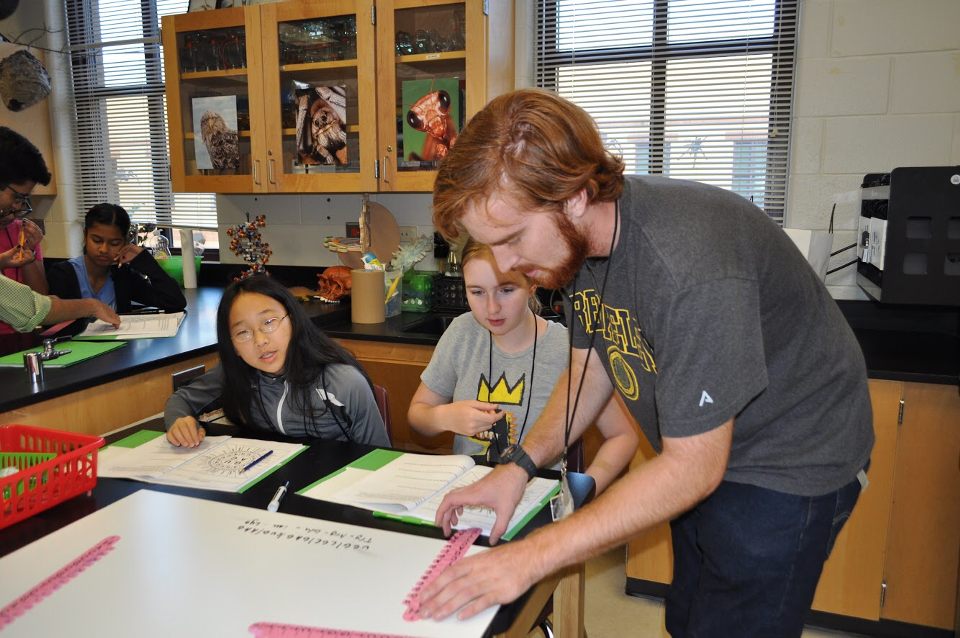