Summary Points
Atlanta Science Festival is a nonprofit organization dedicated to bringing people together through the wonders of science. This organization was founded in 2014 by Emory University, Georgia Tech, and Metro Atlanta Chamber. This event is an annual two-week festival that celebrates local science and technology, featuring more than 100 events and reaching 50,000 children and adults annually. Festival events feature hands-on activities, tours, tastings, and performances from more than 100 partner organizations. Lambert iGEM participated in the Atlanta Science Festival in order to increase the public’s knowledge of synthetic biology. Through collaboration with the Georgia State iGEM team, Lambert iGEM helped children create art with micropipettes and color dye. This simple experiment helped spark interests in science. 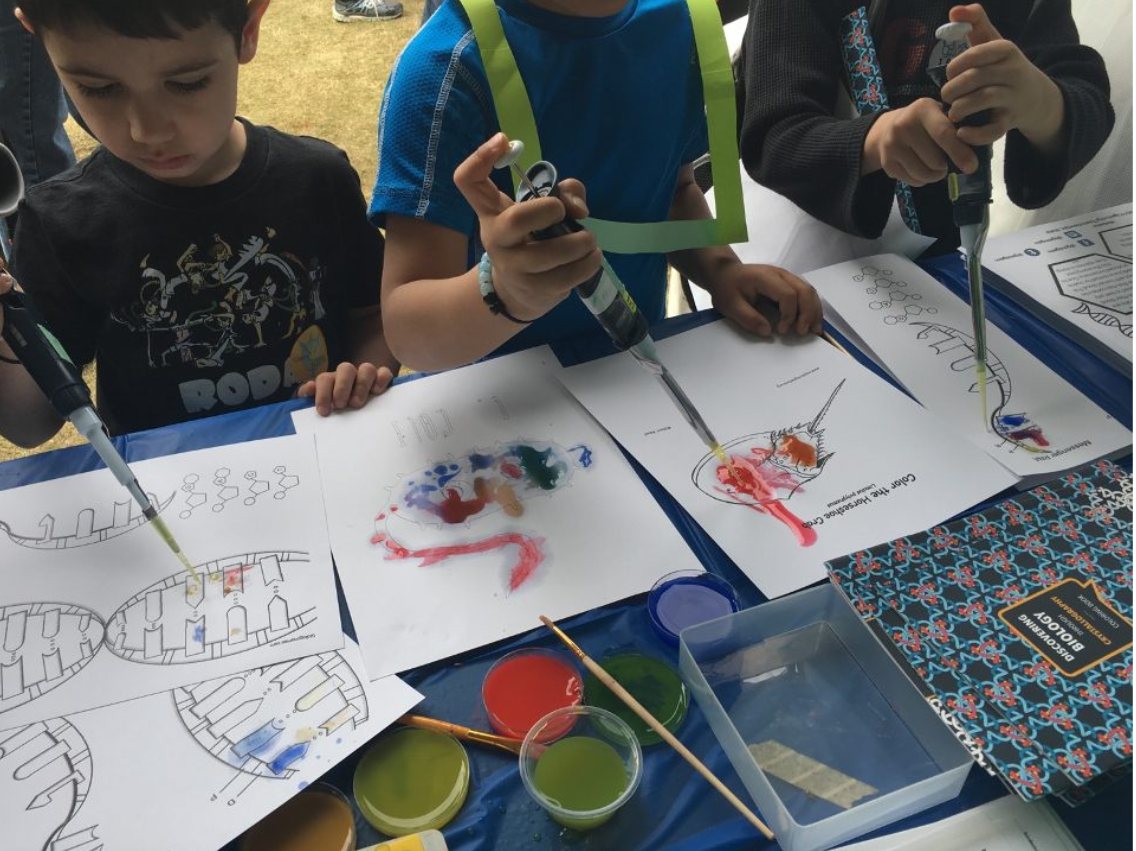 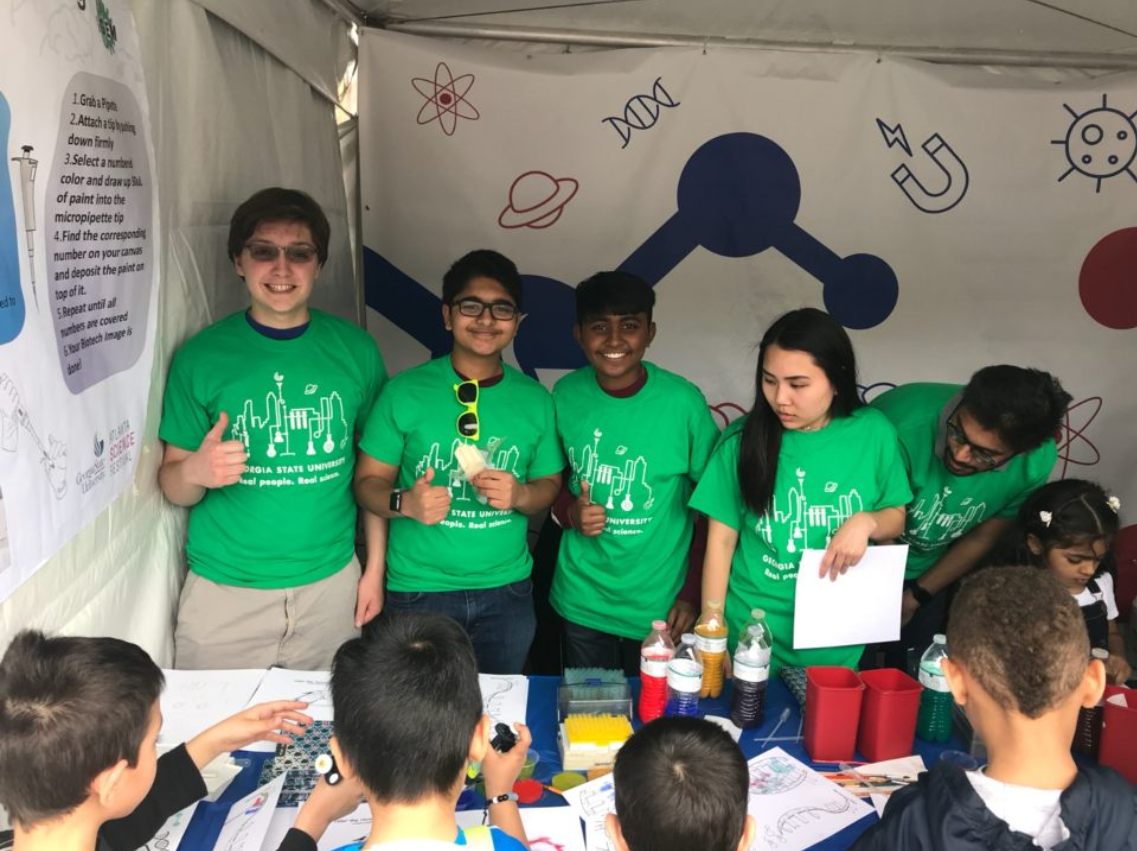 Summary Points A few members of the Lambert iGEM team participated in a summer camp hosted by GSU for deaf students in the Atlanta area. This camp walked students through labs such as DNA barcoding and gel electrophoresis, which were meant to give students with disabilities the opportunity to gain experience in the field of synthetic biology. This camp was a continuation of GSU’s previous project, in which they created new signs in ASL in order to create a larger science-based vocabulary for deaf students. 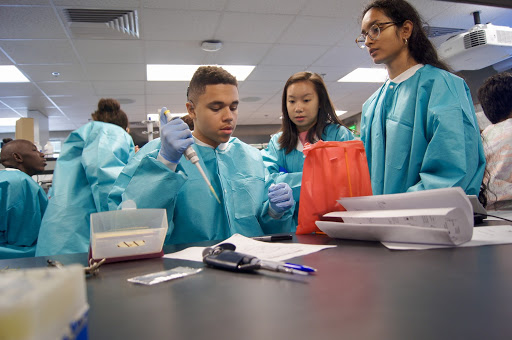 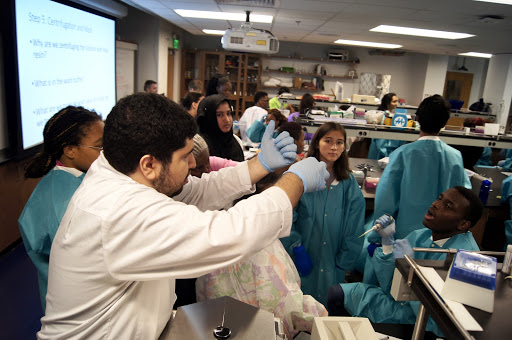 UGA students, Stephan George, Chynna Pollitt, Kelton McConnell, & Arjun Bhatt, helped us prepare labs such as the Transformation lab and DNA lab. They spoke to us about working in a college lab and experiences that they have had. 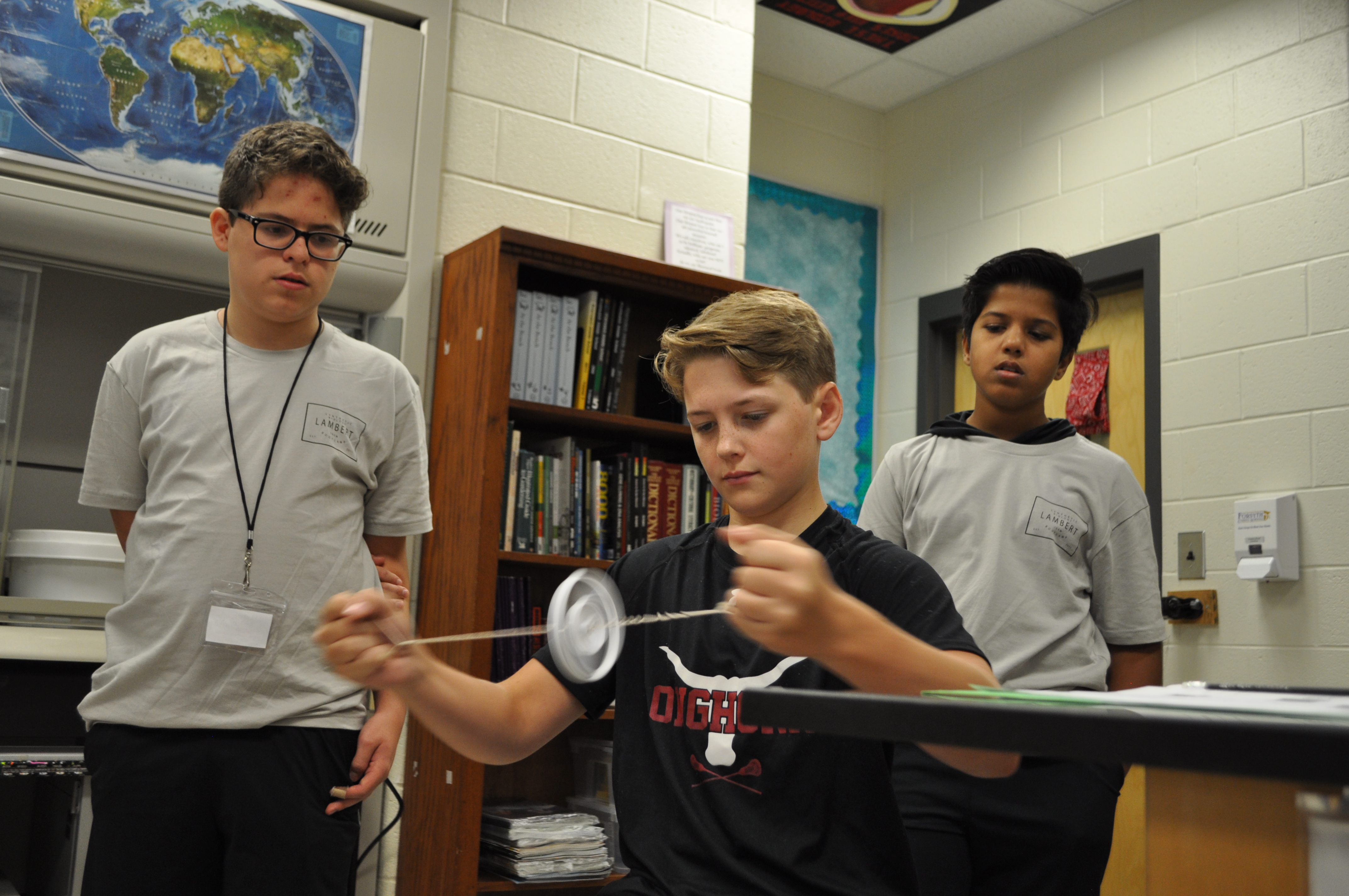 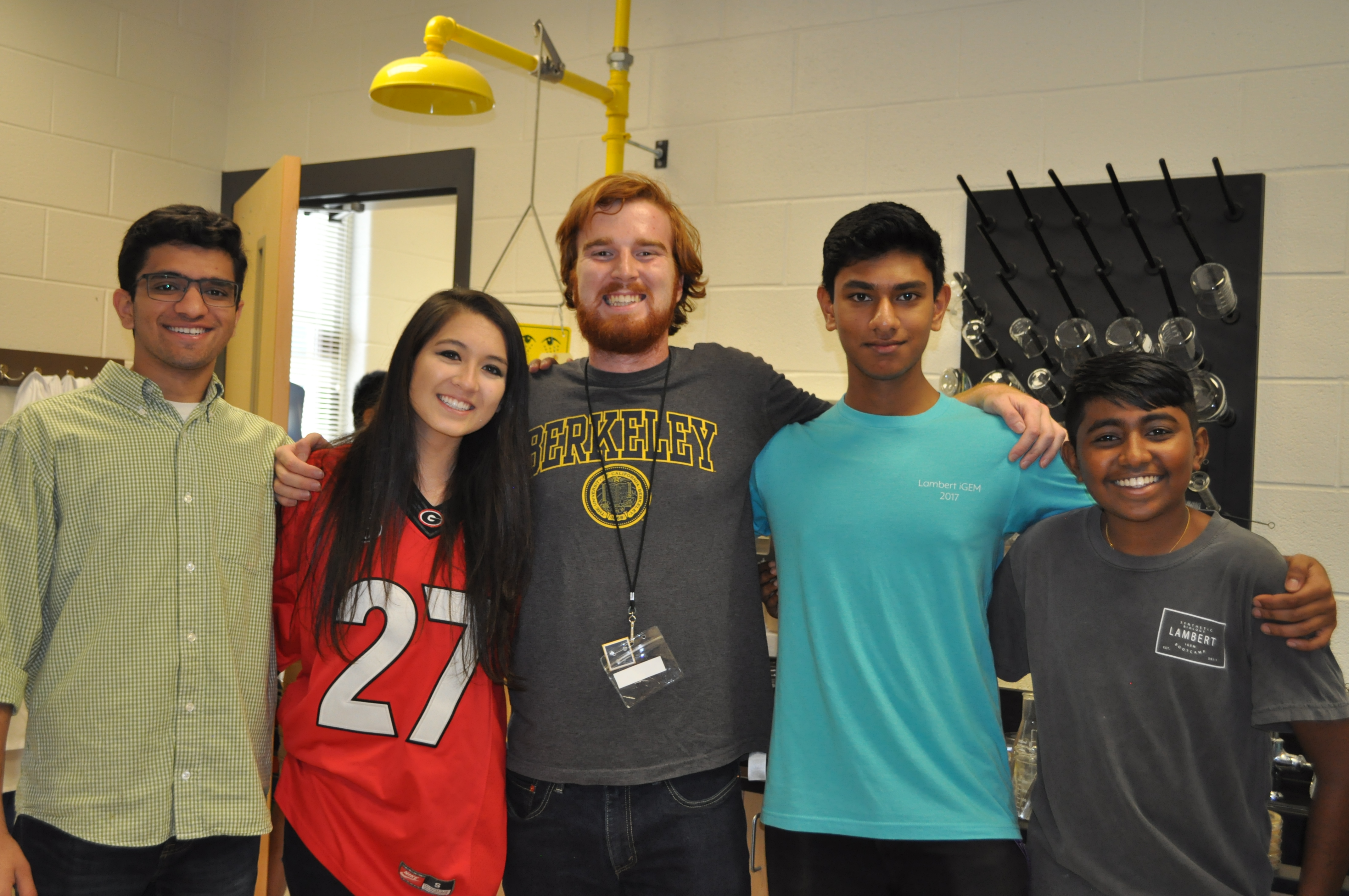 Summary Points
Lambert iGEM planned a Georgia meetup, which took place at Emory University. iGEM teams from Emory University and Georgia State came together. We discussed our projects and had a question and answer session. This meetup allowed us to brainstorm ideas together and to interact with other iGEM team members. 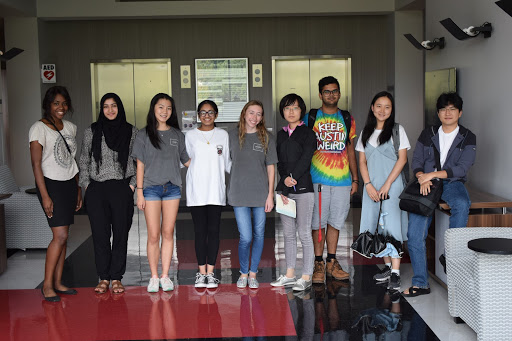 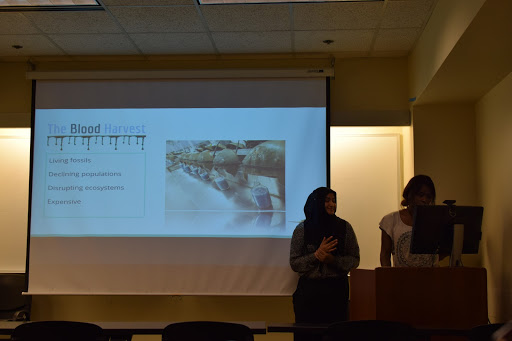 Taipei American School & University of Georgia
A significant component in validating the accuracy and precision of our ElectroPen was understanding the repeatability of results. The TASTaipei and UGA teams were instrumental in proving our ElectroPen works in the real world. Both teams were not only able to successfully electroporate E. coli cells, but also obtained results similar to those from the trials conducted by Lambert's own team. We are very grateful for the collaborations between two iGEM teams without whose time and efforts we could not have proven our Electropen hardware. Thank you TASTaipei and UGA!

TASTaipei received an assembled ElectroPen from us and built a custom cuvette from protocols that we provided. Using these, they prepared electrocompetent DH5a and Nissile 1917 E. coli. They were able to successfully transform both strains with a GFP plasmid and provided transformation efficiency data. UGA’s team also received an assembled ElectroPen and cuvette from us for testing. They were also able to successfully transform and validate GFP expression with a plate reader. Both teams gave us feedback on design and ease of use of the devices.

Nanjing-China
Lambert iGEM created a lab emoji in collaboration with Team Nanjing. The teams hoped to increase accessibility of science to the community. It was an activity that allowed Lambert iGEM to consider the fun of science rather than always focusing on its serious effects. This mindset set allowed a more relaxed, inviting lab environment and an overall better iGEM experience. Team Nanjing also used our app Color Q, testing and proving its functionality. They gave us great feedback on versatility and accessibility, changes that we took to heart. Here are their results:

Westminster UK
Due to limited resources, the Lambert iGEM team understands the significance of conservation and frugality in the lab. In fact, frugal science remains a foundation of our project. In collaboration with Westminster UK iGEM, the team developed a protocol to recycle spin columns without an autoclave, promoting an easy method of increased conservation in the lab. 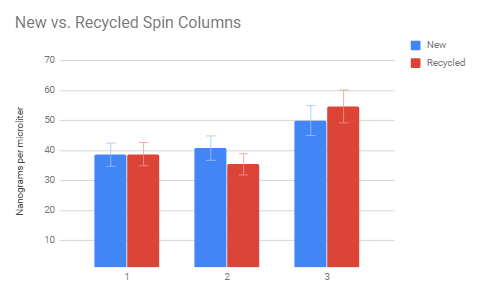 ECUST
Lambert iGEM sent a summary of this year’s project to ECUST. The word restriction encouraged the team to formulate a concise and clear description - a crucial factor to consider when writing an abstract. Additionally, by simplifying the project description, we made it more accessible to the general public.

Uppsala
Lambert iGEM recognizes that synthetic biology requires a lot of hard work and can often result in high stress levels. This can cause extremely dedicated members to feel discouraged or “burned out”. Team Uppsala created a survey addressing this issue. The survey allowed iGEM members to recognize and to address their issues with iGEM-related stress.

Exeter
Since both Lambert’s and Exeter’s 2018 iGEM project are based on water quality, the collaboration between both iGEM teams allowed members to investigate the source of the cause of poor water quality. Exeter iGEM asked for specific water quality reports in the United States. Researching this topic allowed Lambert iGEM to reevaluate this issue in the community, focusing in from the worldwide issue of clean water shortage.

Dalhousie
Since both Lambert’s and Dalhousie’s 2018 iGEM project are based on water quality, the collaboration between both iGEM teams allowed members to investigate the source of the cause of poor water quality. Dalhousie iGEM asked for specific water quality reports in the United States. Researching this topic allowed Lambert iGEM to reevaluate this issue in the community, focusing in from the worldwide issue of clean water shortage.

IIT Kanpur
IIT Kanpur’s project emphasizes the lack of clean water around the world, a major focus of Lambert iGEM’s project. This collaboration about water pollution allowed Lambert iGEM to recognize the presence and application of the project within the local community as well as worldwide.

HAFS
Since both Lambert’s and HAFS’s 2018 iGEM project are based on water quality, the collaboration between both iGEM teams allowed members to investigate the source of the cause of poor water quality. HAFS iGEM asked for specific water quality reports in the United States. Researching this topic allowed Lambert iGEM to reevaluate this issue in the community, focusing in from the worldwide issue of clean water shortage.

EPFL
Lambert iGEM took artistic pictures in the lab and submitted it to team EPFL’s photo competition. Art is a universal medium everyone can appreciate, and both teams believe it can expose the public to the beauty of synthetic biology.

Bulgaria
Lambert iGEM took “Follow Me to...” photos around the lab to show other iGEM teams Lambert’s lab environment. This collaboration allowed the iGEM community to gain a greater understanding of how other teams function.

Imperial College
Lambert iGEM took the Imperial College’s survey on team communication and dynamics. Like all teams, Lambert iGEM has instances of tension and disagreement between members. Taking the survey pushed the team to be open about their issues and work through them, resulting in an improved team bond.

UC San Diego
The lab environment of synthetic biology can often be polarizing, as it is a relatively new field. Lambert iGEM participated in a survey about iGEM’s goals, needs, and climate to further solidify iGEM and synthetic biology’s direction in the future.

US AFRL Carrol
There is a stigma associated with the biotechnology field. This negative perception shared by the public can hinder advancements in synthetic biology. To address this issue, Lambert iGEM posed with US AFRL Carrol’s characters Mike the Microbe and Chia the Chitinase, two lovable animations that appeal to the general public.

Bielefeld
Lambert iGEM participated in a survey and lecture about Dual Use, a scientific concern that most iGEM team members are unfamiliar with. Through this collaboration, the team was able to recognize and understand this international ethical issue.

UCopenhagen
Lambert iGEM participated in a survey, which focused on the public engagement aspect of our team. The survey allowed members to reevaluate experiences within the team and with the public.

TecCEM
Lambert iGEM participated in a survey about burn treatment in America. The team submitted local information to contribute to TecCEM’s project.