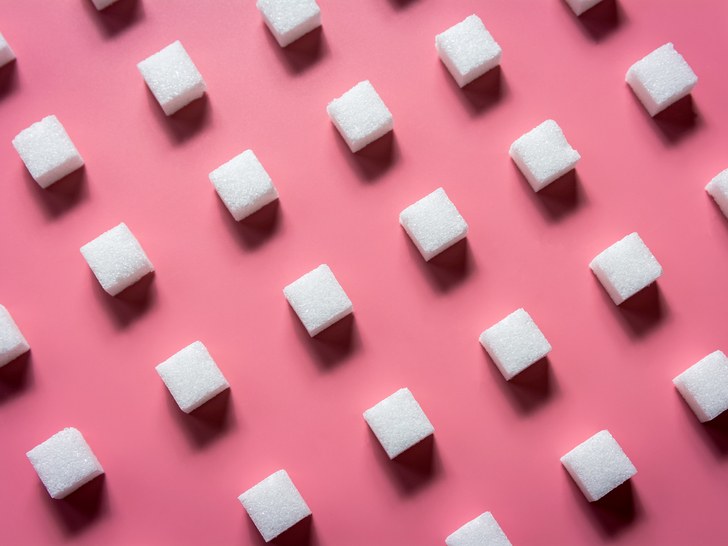 Our team is committed to improving the activity of DTE. We designed a DEcose (Directed Evolved D-psicose) platform to literally build a self-evolving factory for the DTE enzyme, where DE (Directed Evolution) provides us an automatic, high-throughput, repeatable production mode. We also designed a series of devices to demonstrate the platform: the sensing, selecting, coupling and evolving circuit. Here are some of results and explanation of our experiments to demonstrate our circuit really work.

Sensing Circuit converts the productivity (cellular concentration) of D-psicose to the expression level of downstream genes. In order to test efficiency of pPsi and PsiR, we did the following two experiments.

When selecting different enzyme, there will be psicose, gluctose, IPTG,and fructose in the medium. Other sugar like fructose may also bind to PsiR and induce gene expression. To illustrate the specify of promoter, we designed this experiment. We added same amout of psicose, fructose,gluctsoe,and IPTG into same amount of same bacteria. Fluorescence intensity and optical density (OD600)was measured every 30min and the curve of fluorescence in single cell strain change with time was plotted. The results were shown below. 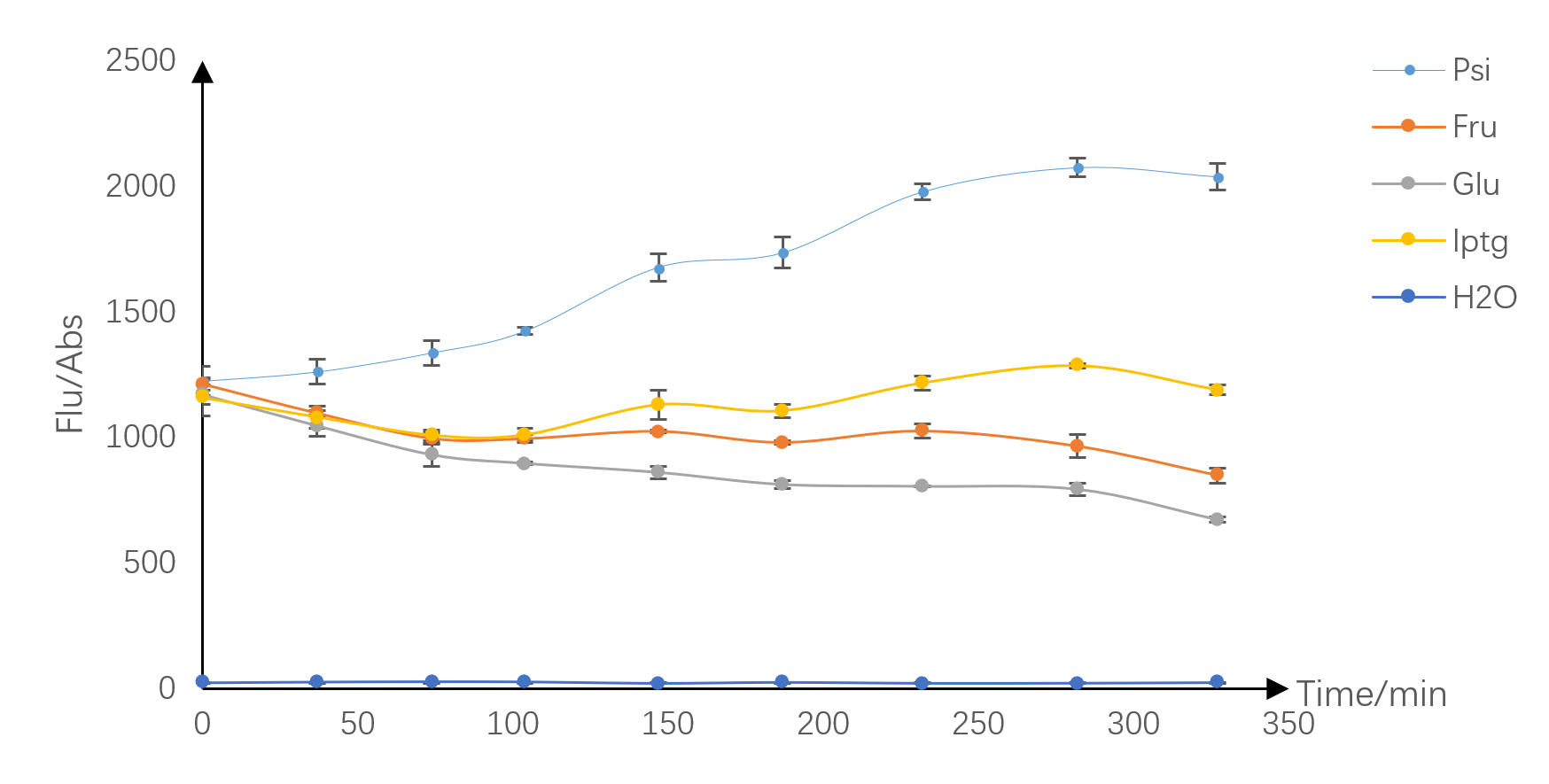 Figure1 shows that at the same time, the florescence intensity varies with different sugar and psicose is always higher than other sugar. So we could draw this conclusion that pPsi is specific to psicose and not sensitive to other sugar.

We have explored the potential to use a series of antibiotic resistance genes as quantitative reporter, which their expression levels are converted into different growth rates of chassis organisms. In order to make the characterization data reusable, we have substituted pPsi promoter to pLac. pLac is a more characterized promoter than D-psicose induced one.

We designed a series of experiments to characterize the function of selecting circuit and to decide which antibiotic is suitable for our system. Take selecting circuit-KanR for example, we put the same quantity of bacteria with selecting circuit into a 96-well plate, added different concentration of Kan and IPTG into the medium and measured the OD600 during 5h. The results were shown as below. 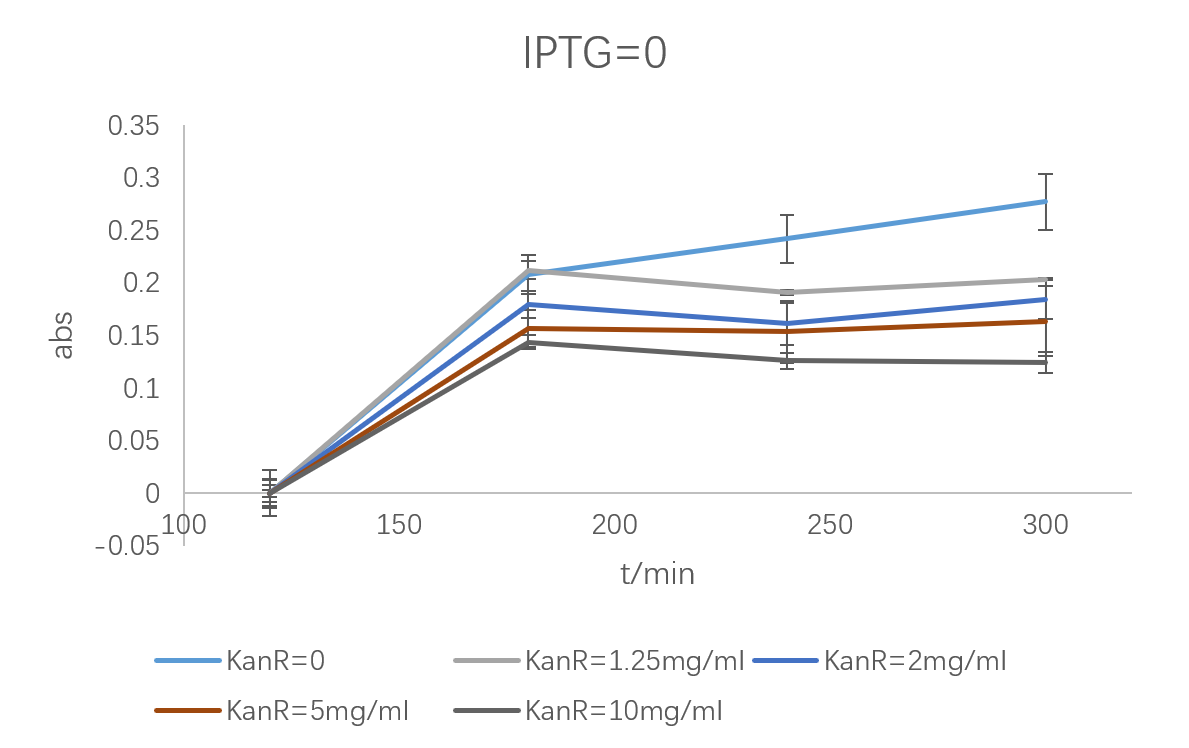 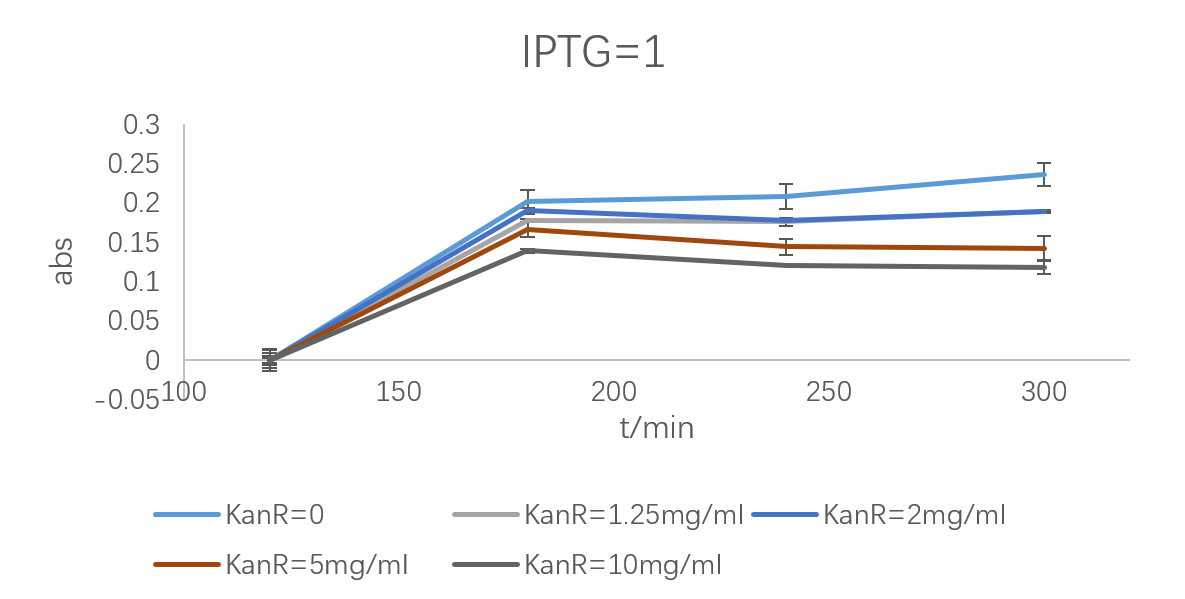 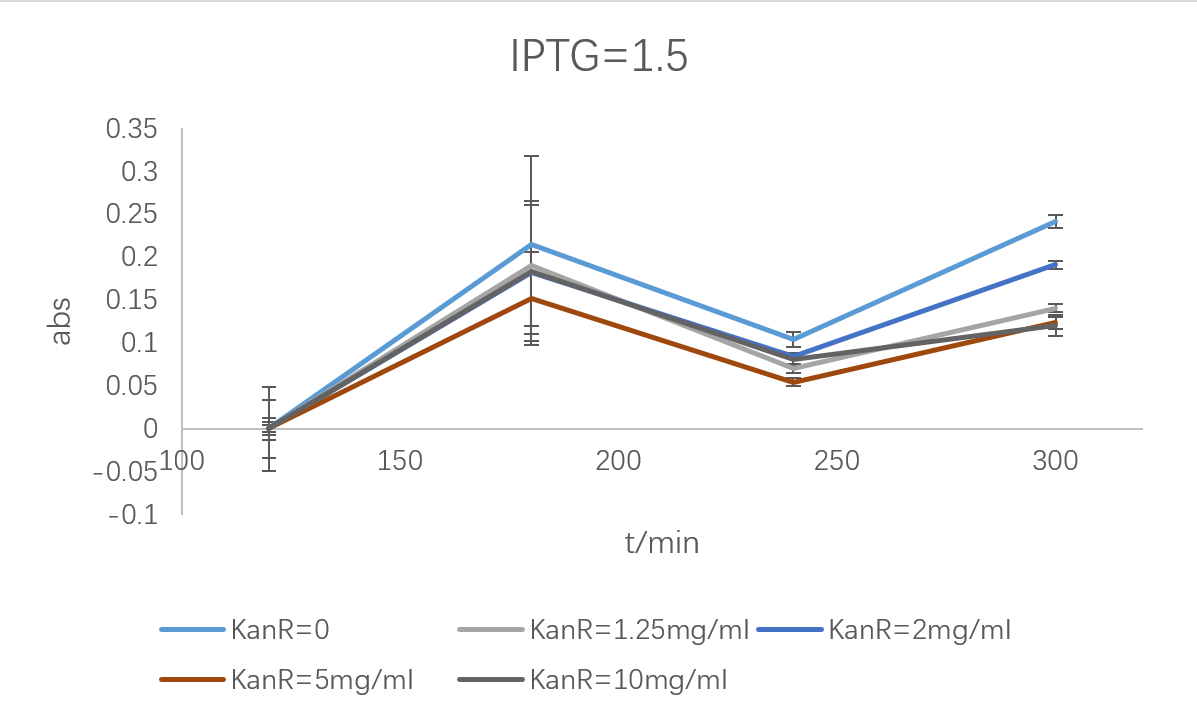 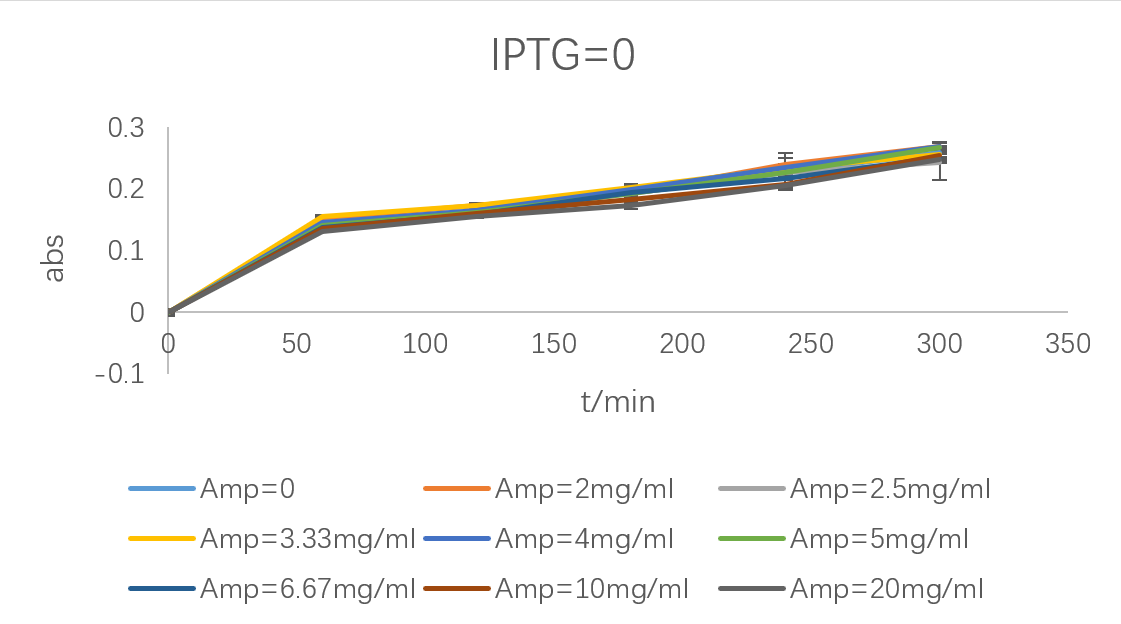 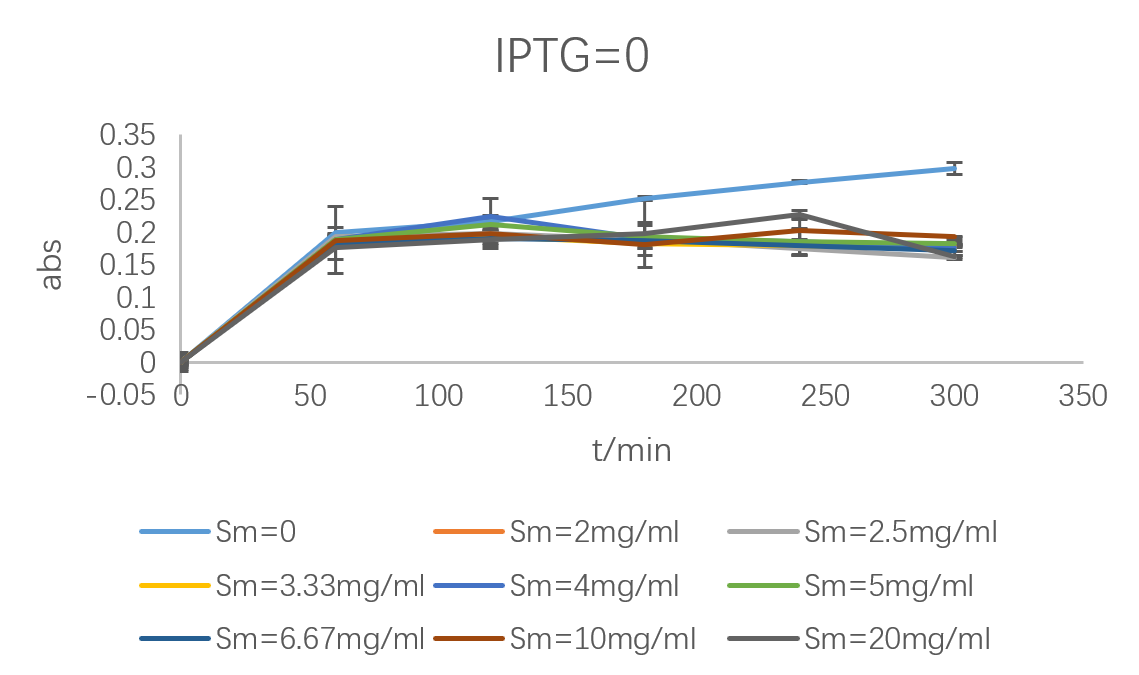 As for selecting circuit-AmpR, only a little expression of AmpR can give bacteria extraordinary resistance. Although we didn’t add any inducer to the medium, the bacteria grown merrily in the ocean of Amp. Selecting circuit-SmR is the same. There is no doubt that Amp and Smr are not competent to screening. We chose KanR to construct our device D.

To test whether through hairpin structure, the downstream translational level is quantitatively associated with the upstream. We designed this experiment. In different time periods, we measured RFP and EGFP fluorescence intensity and fitted a curve. The results were shown as below. 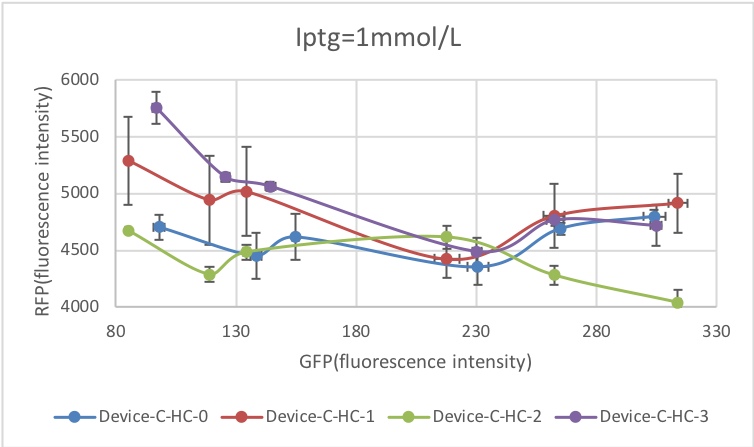 Evolving Circuit summarizes all regulatory mechanisms used above and acts to quantitatively convert different productivities of DTE to a spectrum of growth rates. Utilizing the characterization from Selecting and Coupling circuits, we achieved the suitable antibiotic concentration to exert growth pressure in evolution.

Previous study has shown different activity of DTEs (DTE and DPE, figure4 ). To demostrate our system really work, we constructed evolving circuit plasmid with DTE and DPE separately and transformed them into E.coli. 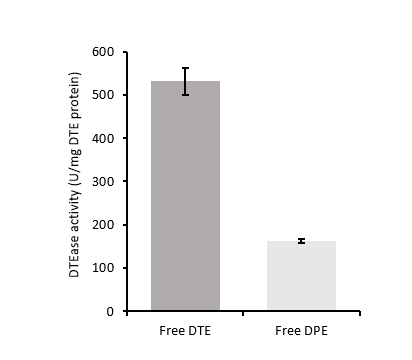 Firstly, according to sensing circuit, the efficiency of pPsi and concentration of psicose in the medium are positively related. Secondly, if activity of DTEs is higher, there will be more psicose in the medium which results in more gene expression. Thirdly, according to coupling circuit, the fluorescence intensity was qualitatively related to the expression of resistance genes. To characterize the expression of antibiotic resistance gene, we measured florescence intensity at different time and ABS at 600. The curve of fluorescence in single cell strain change with time was plotted. The results were shown as blow. 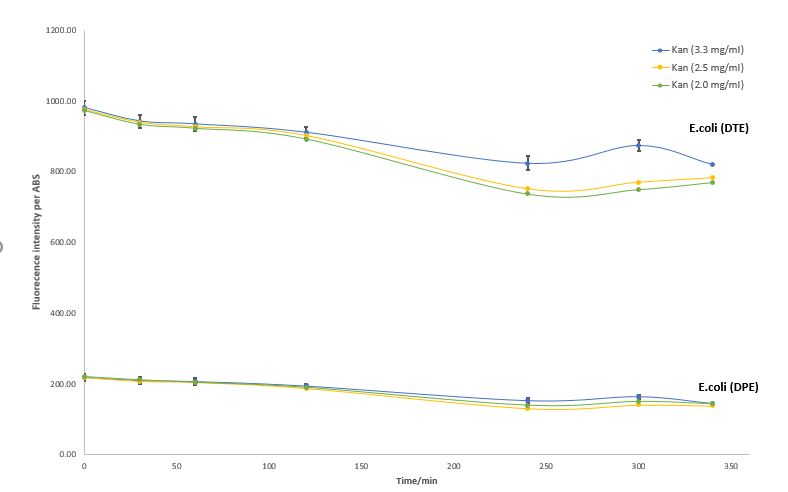 According to selecting circuit, kanamycin is better than other antibiotics. We set KanR three concentration gradients and measured changes of cell growth of E. coli under these concentration. The results are shown below (figure 6 and 7).

Both figure 6 and 7 show that at the same time, ABS at 600 gradually decreased with the increase of antibiotic concentration. In other words, increasing concentration of antibiotics means increasing the pressure for evolution and the inhibition of bacterial growth is also more obvious.

They also mean that our system can work.