The InterLab study is conducted by the iGEM organization and is an attempt at reducing variability in measurements taken in different laboratories, thus facilitating easier sharing of data between laboratories. More specifically, the Measurement Committee at iGEM is attempting to develop a robust method for fluorescence measurements of Green Fluorescent Protein (GFP) that can minimize lab-to-lab variations in readings taken by a standard plate reader. For more details on the InterLab study please visit the following URL: https://2018.igem.org/Measurement/InterLab

The following three calibrations were carried out as per the protocol given:

Monodisperse silica microspheres of known concentration, and having size and optical characteristics similar to that of the cells were used to correlate the concentration of the cells with the Abs600 value measured. The given protocol was followed and the calibration curve obtained is shown below:

Fluorescein solution of a known concentration was used to correlate the fluorescence levels with the concentration of fluorescein. Fluorescein was used as it is easier to produce and store than GFP and has similar properties to GFP. The given protocol was followed and the following calibration curves were obtained:

The saturation of the fluorescence values at high concentrations of fluorescein are due to the values going out of the instrument’s range.
These values were not taken into account while obtaining the conversion factor for Molecule Equivalent Fluorescence Level (MEFL) per fluorescence a.u. \[ \frac{MEFL}{Fluorescence\ a.u.}=\ 7.12\ *\ 10^6 \]

The 6 test devices, positive control and negative control were all transformed into Escherichia coli DH5α cells. The transformed cells were plated onto LB + Chl Agar plates. Two colonies were taken from each plate and inoculated into LB + Chl liquid medium, and measurements of absorbance and fluorescence were taken for each colony as per the protocol given.

The instrument settings used for this study are:

The results obtained are shown in the charts given below.

Each test device used in the study comprises of the same gene and RBS, but has a different constitutive promoter from the Anderson family of promoters. Each promoter thus has a different level of expression of the GFP protein leading to the different values of fluorescence.
The values of absorbance and fluorescence obtained should be equal for both colonies of the same test device. It is seen from the above figures that this condition is observed. The minute discrepancies in the values of absorbance and fluorescence of the two colonies from the same test device can be attributed to human error during the serial dilutions. It is also seen from the data that the values of absorbance and fluorescence increase with time from 0 hours to 6 hours which is as expected. Test Device 1 is observed to be the strongest promoter sequence, having the highest level of fluorescence in spite of its low growth rate. It is possible that the extremely high level of expression of GFP is the reason for the slow growth rate, considering it would put a lot of stress on the cell’s metabolism. Test Devices 3 and 5 show weak constitutive activity. The difference in activity is due to differences in the promoter sequences of each Test Device. Each promoter sequence is known to exhibit a different strength. For more information on the Anderson family of promoters please visit the following webpage:
http://parts.igem.org/Promoters/Catalog/Anderson

These above charts show the absolute values of absorbance and fluorescence obtained. These values have been normalized using the calibration curves to obtain the equivalent values of Fluorescein concentration (μM) per OD and MEFL/particle in the Excel Sheet submitted to the Measurement Committee at iGEM.

For the second part of the InterLab study, i.e., the CFU measurements, the dilution series was created according to the given protocol, and the number of colonies that grew on each plate were counted.
Using these values, we can obtain the number of CFUs per ml of culture with initial OD = 0.1, i.e., the number of single cells present per ml of starting culture with initial OD = 0.1. This value can be used to normalize the fluorescence readings obtained in a similar manner as the microsphere calibration curve. On obtaining such data from multiple teams working in different laboratories, the Measurement Committee at iGEM should be able to infer if using the number of CFUs to normalize fluorescence readings is an efficient mode of reporting fluorescence measurements.

The number of CFUs obtained are shown below: 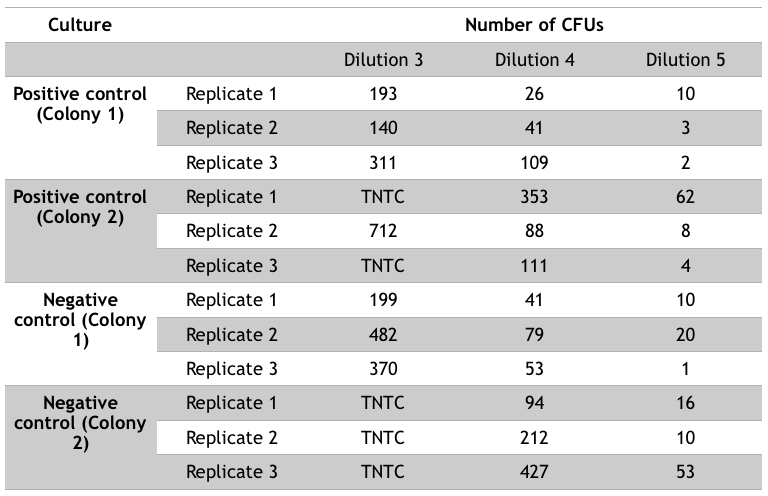 Figure 5: Number of CFUs observed for each dilution as mentioned in the protocol