Click on the Week tab to navigate through the notebook:

Seeds procured for growth of the following crops – rice, wheat, tomato and soybean.
1. Circuit design and planning of wet lab work. To see the design of our circuit please click here
2. Materials required to start lab work were procured.
3. Parts from the registry to be used in building the circuit were identified. The following parts were shortlisted to be used:

a. Xylose inducible promoter for B. subtilis
b. Maltose inducible promoter for B. subtilis
c. Mannitol inducible promoter for B. subtilis
d. Copper ion inducible promoter for B. subtilis
5. Primers ordered for gene phoD which produces alkaline phosphatase enzyme
6. Test devices for the InterLab study were reconstituted as per the protocol given on the iGEM website and transformed into E. coli strain DH5α (for protocol please click here).
Glycerol stocks made for each test device (for protocol please click here) and stored at -80℃.
7. Sowing of seeds for growth of plants into sterile soil at Vaze college.
Plans to make an amplification circuit was made that would look like: Pin (inducible by plant exudates) – RBS – Ta(transcriptional activator) - Pta(induced by transcriptional activator) – RBS – Ta(transcriptional activator) – RBS – GENE – TER. Plans were made to produce Phytases and salicylic acid from B.subtilis. Materials required to start the project were collected, primers were ordered every requirement was met in this week.
Extraction of exudates from the soil of the crops grown (see exudate extraction protocol here)
The following parts from iGEM 2018 distribution kits were reconstituted and transformed into E. coli strain DH5α:
• Jo4450
• K274380 (construct with transcriptional activators1)
• K274371 (construct with transcriptional activators2)
• K823001 (promoter induced by Bacitracin )
Plasmid backbone PSB1C3 was obtained from J04450 K274380 and K274371 have the following structure:
RBS – TA – Ter – Pta (TA – Transcriptional Activator, Pta – promoter activated by transcriptional activator, Ter - terminator) Out of this RBS – Ta were PCR amplified and joined at the ends of these parts using 3A assembly to give a construct like:
RBS – Ta – Ter – Pta – RBS – Ta.
From this construct, the RBS – TA section was PCR amplified using appropriate primers, and ligated to these parts using the 3A assembly (protocol used given here). The above parts were digested using EcoRI and SpeI, while the RBS – TA parts were digested using XbaI and PstI to give a construct like:
RBS – Ta – Ter – Pta – RBS – Ta.
Sizes of the parts were checked by gel electrophoresis on a 1% agarose gel. (protocol available here). Correct sizes of the bands were observed and the parts were gel purified. (protocol available here). Below is a picture of the gel taken on a BioRad Molecular Imager® VersaDoc™ MP 4000 system. 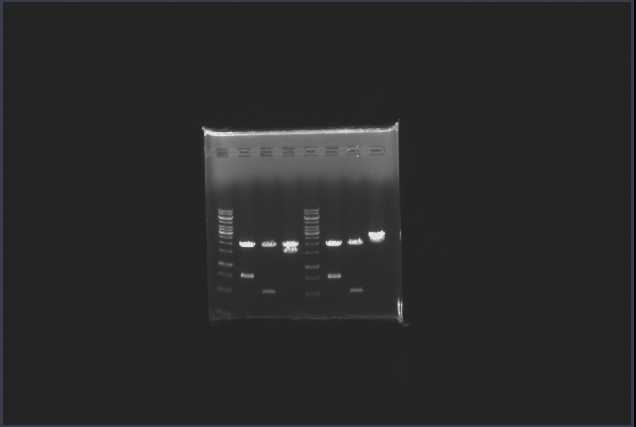 Glycerol stocks of E coli DH5α strains containing the plasmids with these parts were made and kept at -80℃ for long term storage.
• The part with K274380 was named 80P (Pag is the transcriptional activator)
• Part with k274371 was named 71O (Ogr is the transcriptional activator)
• Along with this k518012 (RBS – RFP - Ter) was pulled out of iGem distribution kit 2018.
• The gene PhoD was PCR amplified from the genome of B.subtilis 168 with an annealing temperature of 60 deg Celsius .

• These new parts were analyzed for correct sizes. Since the size of the new part and the plasmid backbone were identical we had to run longer gels in order to observe correct sizes 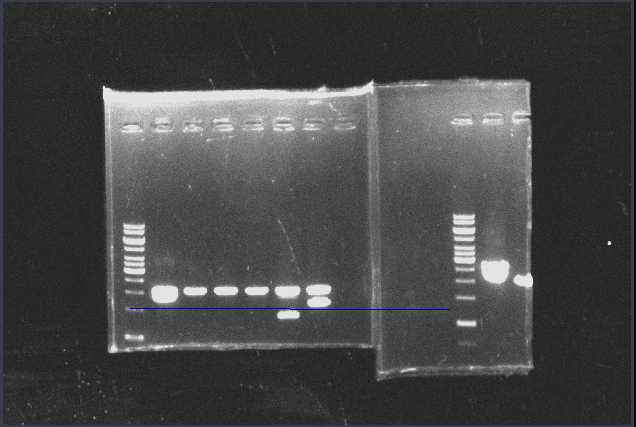 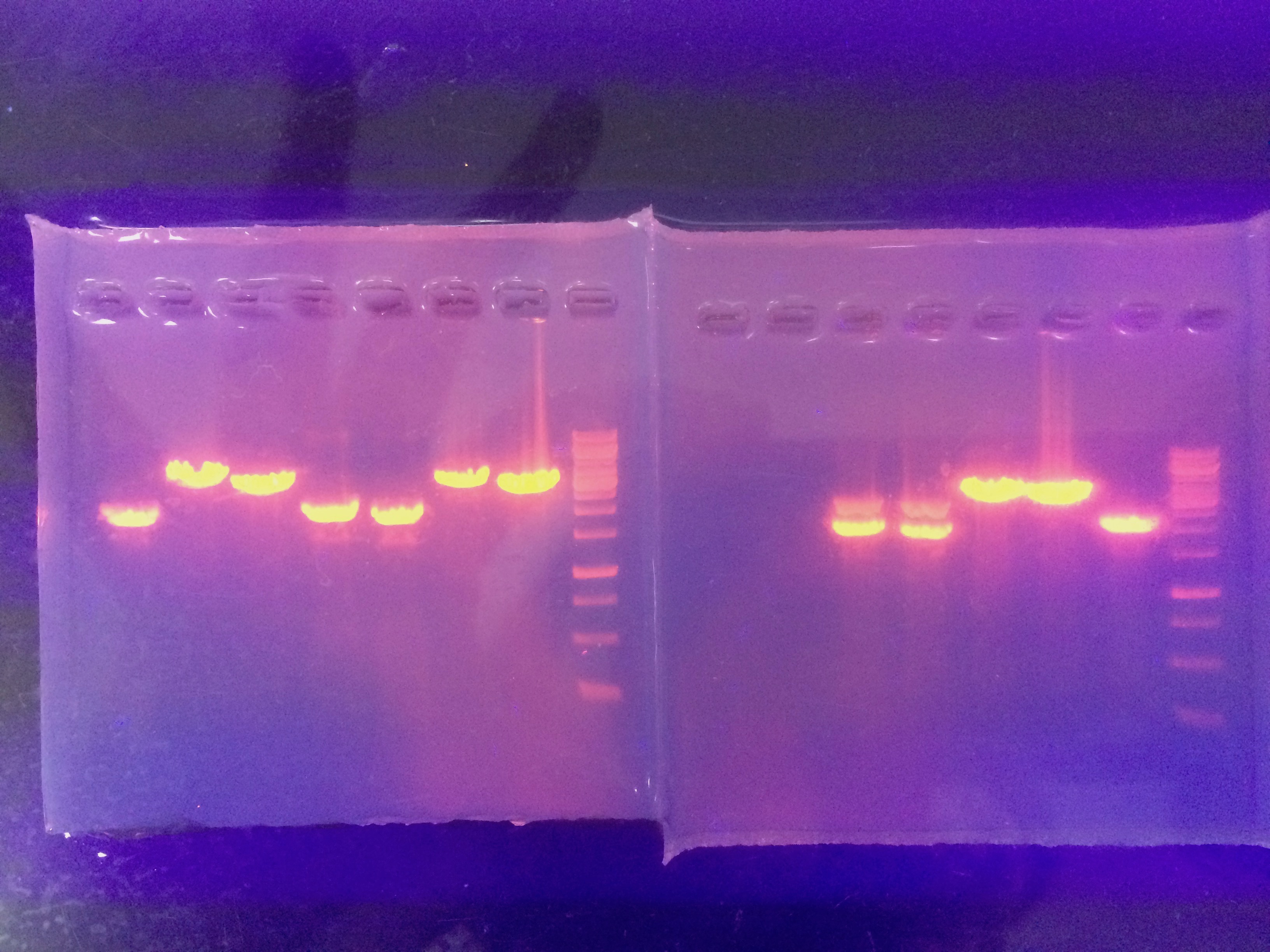 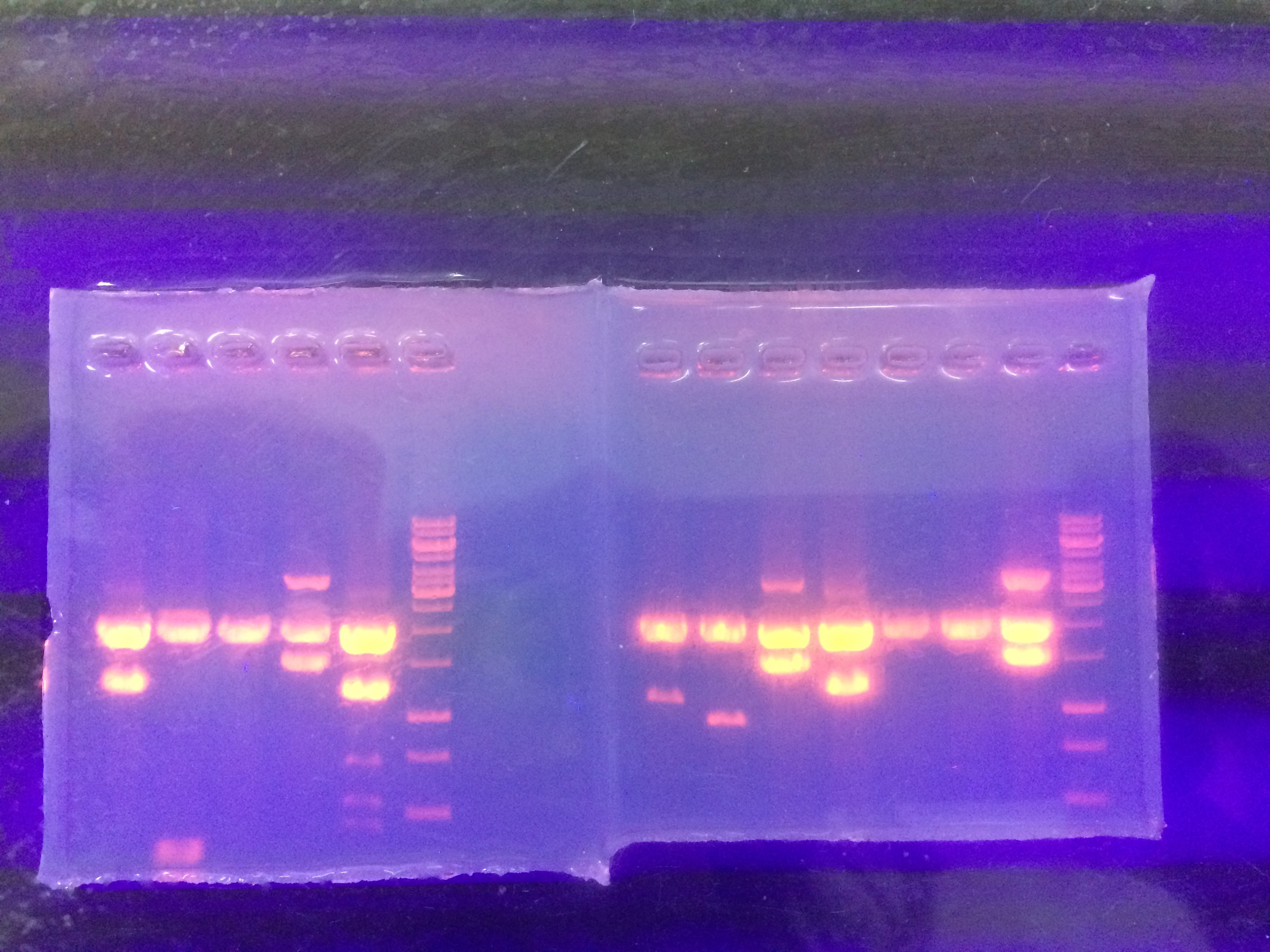 • Ligation reactions of week 14 repeated by changing the insert:vector ratio to 5:1

• Sizes of ligation products checked. Ligations were unsuccessful.
• Planned the whole process of part purification, digestion and ligation for next week, with gel electrophoresis after each stage to troubleshoot the process. 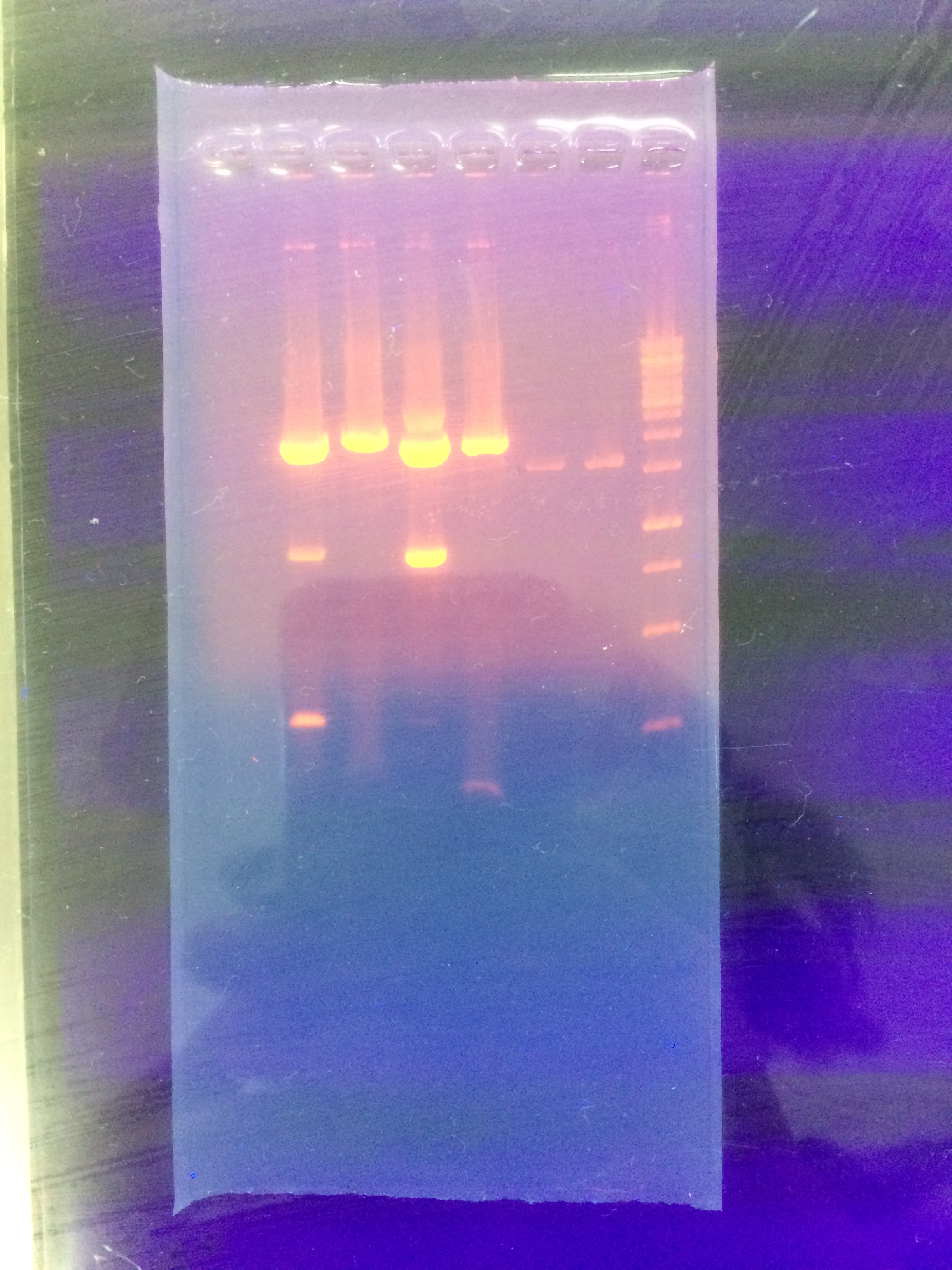