Synthetic biology interconnects the principles of biology and engineering. Reliable and repeatable measurement is one of the fundamentals of engineering, which synthetic biology must also aspire to achieve. However, replicability of fluorescence measurements between labs presents a unique challenge because of differences in how the data are acquired and processed, and other sources of systematic variability that are not accounted for (such as the number of cells in a sample). By using “relative expression” comparisons, users from different labs cannot directly compare results.

The purpose of the 2018 InterLab Study was to attempt to reduce lab-to-lab variability by standardizing green fluorescent protein (GFP) fluorescence measurements. This was done by normalizing GFP fluorescence to absolute cell count or colony-forming units (CFUs) instead of optical density (OD).

2. Counting colony-forming units (CFUs) from the sample.
We can estimate the number of individual cells in a volume of liquid media by plating a sample and quantifying colonies (which are each clones of a single cell). The number of colonies in positive and negative control samples can be used to calculate a conversion factor from absorbance to CFU.

For complete methods, refer to: https://2018.igem.org/Measurement/InterLab/Plate_Reader

A Molecular Devices Spectramax i3x plate reader was used to measure sample absorbance and fluorescence. This device has variable temperature settings, top optics, and pathlength correction, which can be disabled. All GFP measurements were taken at wavelengths of 535/25nm for emission and 485/20nm for excitation. We used clear-bottomed 96-well plates for all measurements.

1. LUDOX CL-X (45% colloidal silica suspension) was used as a single point reference to obtain a conversion factor to transform absorbance data into a comparable OD measurement.

2. A dilution series of monodisperse silica microspheres was used to measure absorbance and produce a standard curve of particle concentration. This standard curve was later used to convert absorbance measurements to an estimated number of cells.

3. A dilution series of fluorescein, which has similar excitation and emission properties to GFP, was used to generate a fluorescein standard curve. This standard curve was later used to convert cell-based readings to an equivalent fluorescein concentration.

Briefly, we measured the raw absorbance and fluorescence of diluted cells (transformed with the below testing devices) at 0 hours and after 6 hours of incubation at 37°C. 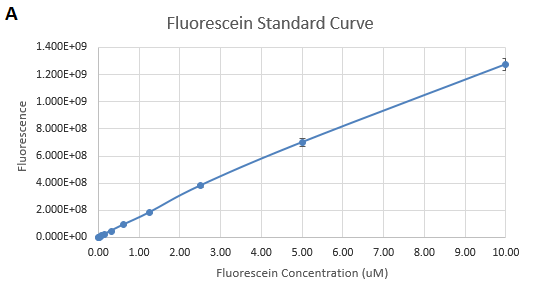 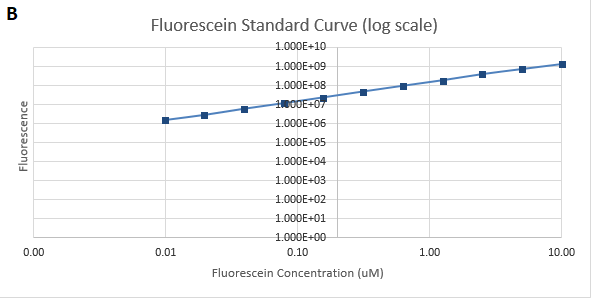 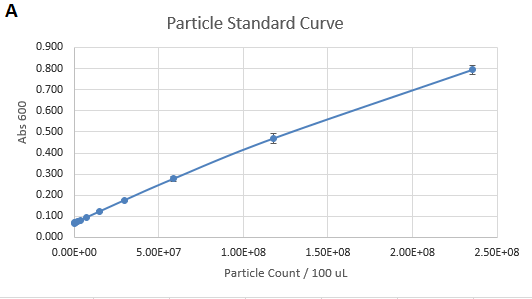 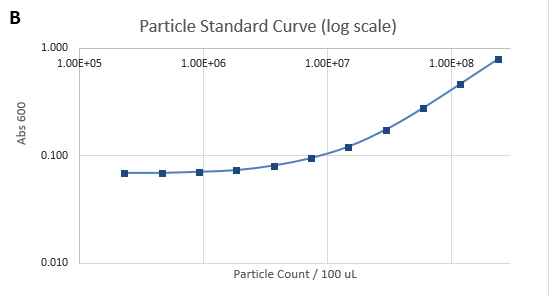 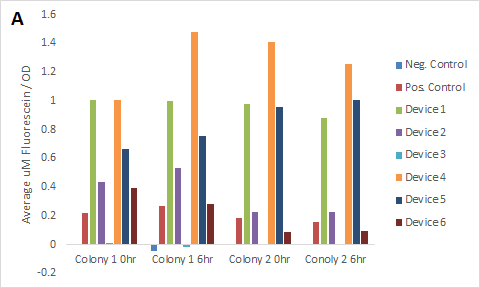 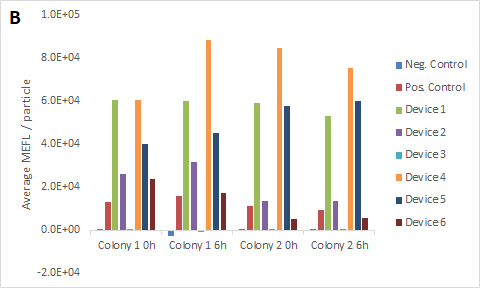