FucO is the gene that codes for L-1,2-propanediol oxidoreductase which is a NADH-linked, homodimer enzyme having the role of acting on furfural which is a toxic inhibitor of microbial fermentations causing cell wall and membrane damage, DNA breakdowns and reduced enzymatic activities (Zheng, 2013; Liu, Ma & Song, 2009).

The enzyme catalyzes L-lactaldehyde and L-1,2- propanediol while dissimilating fucose in which acetaldehyde, ethylene glycerol, L-lactaldehyde and some more substances are used as substrates. Despite these, it takes an important role in furan reduction to its alcohol derivative (Wang et al., 2011). 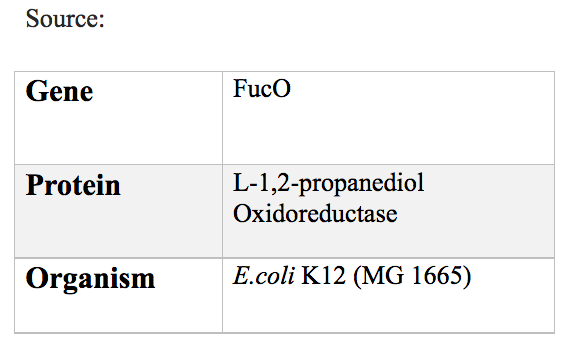 Our circuit design for FucO gene

Our circuit consists of prefix, a strong promoter (J23100), RBS (B0034), FucO as protein coding region, double terminator (B0015) and suffix. This part enables our E. coli KO11 strain to convert toxic furfural into furfuryl alcohol. Our construct was inserted into pSB1C3 and delivered to the Registry.

FucO has NADH-dependent furan reductase activity. When furfural is present in the field, the metabolism of furfural by NADPH-dependent oxidoreductases goes active in order to reduce it to its less toxic alcohol derivative-furfuryl alcohol (Zheng, 2013; Wang et al., 2013; Allen et al., 2010).

Figure 2: Effect of FucO overexpression in LY180 (Wang et al., 2011). The cell mass was observed in furfural containing medium. The FucO gene expressing L-1,2-propanediol oxidoreductase reduces the effect of furfural. The specific death rate of normal bacteria is observed to be higher than the specific death rate of bacteria with FucO gene. Thus, FucO is shown to increase the tolerance and lifespan of bacteria.

In this metabolism, the expression of oxidoreductases that are NADPH-dependent, such as YqhD, are shown to inhibit the growth and fermentation in E. coli by competing for biosynthesis with NADPH (Zheng, 2013). 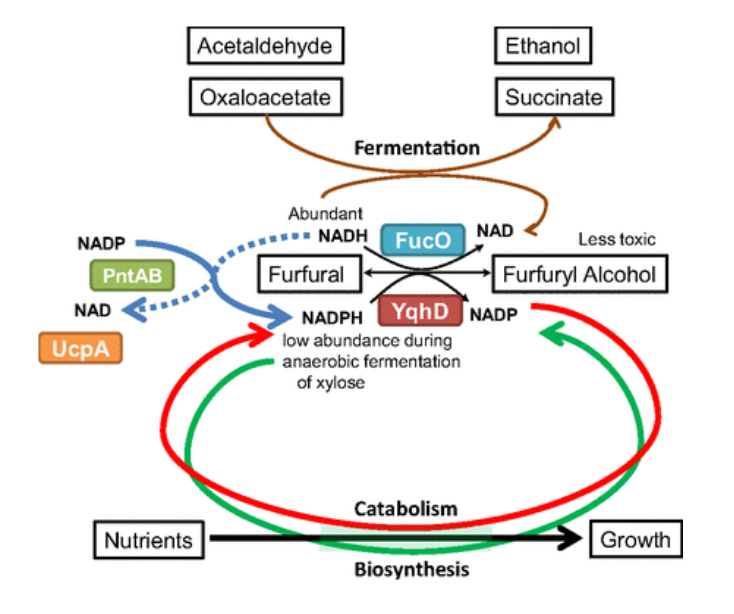 Figure 3: The overexpression of FucO and YqhD and relationships with furfural resistance traits, metabolism, and reducing cofactors (Wang et al., 2013).

Because the native conversion of NADH to NADPH in E. coli is insufficient to revitalize the NADPH pool during fermentation, the actions shouldn’t be interfering with NADPH metabolism (Wang et al., 2011). Thus, the overexpression of plasmid-based NADH-dependent propanediol oxidoreductase (FucO) gene reduces furfural to ultimately improve furfural resistance without detrimentally affecting the biosynthesis of NADPH (Wang et al., 2011).

The protein structure of L-1,2-propanediol oxidoreductase was constructed by using Amber 14. It is demonstrated in ribbon diagram which is done by interpolating a smooth curve through the polypeptide backbone. The colors indicate the amino acids in the protein structure. 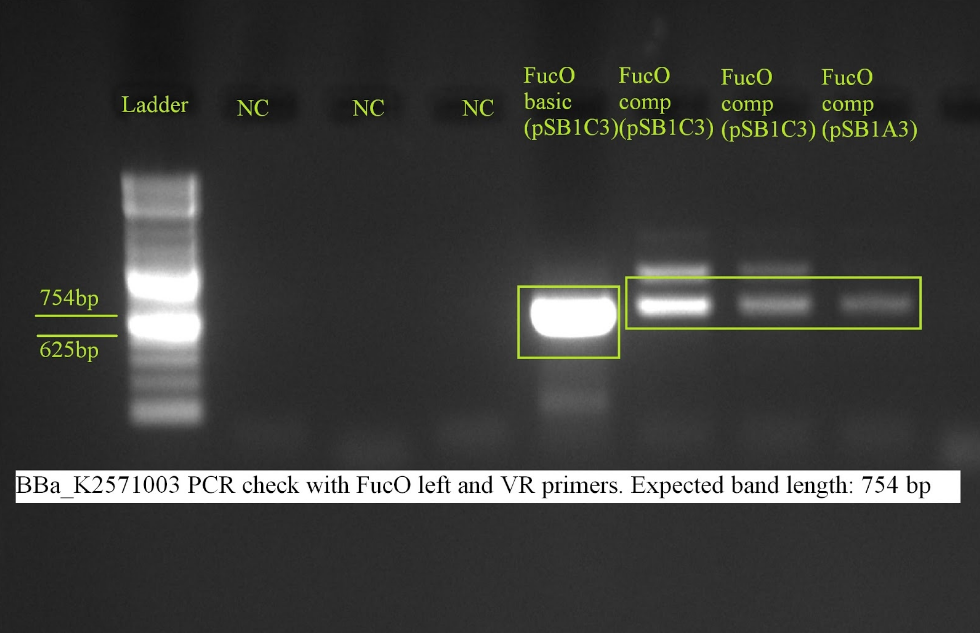 We’ve inserted the FucO composite part to pSB1C3 and pSB1A3 backbones. Then, we’ve transformed the construct for submission, BBa_K2571003, (in pSB1C3) to DH5⍺; and the other construct, for our biochemical assay, (in pSB1A3) to KO11. As we isolated the plasmids, we’ve done PCR with FucO left and VR primers to test orientation of our parts to the backbone. We expected a band of 754 bp between the FucO left and VR primers and the PCR results confirmed our expectations and showed that our parts were correctly inserted and transformed.

FucO Left and VR primers are as below:
FucO Left: GTGATAAGGATGCCGGAGAA
VR: ATTACCGCCTTTGAGTGAGC

Reactive Oxygen Species (ROS) are dangerous substances that distort protein based matters by taking electrons (Lu, 2013). The chemical structure of the protein-based substances are altered and become dysfunctional because of ROS (Lu, 2013; Burton & Jauniaux, 2011).

Furthermore; one of the most significant protein-based substance, DNA, gets attacked by OH radicals (Burton & Jauniaux, 2011). However, the reduced form GSH can protect the chemical structure of the proteins by donating extra electrons to ROS and free radicals (Lu, 2013). This is accomplished by GSH peroxidase-catalyzed reactions (Lu, 2013).

The protein structure of Bifunctional gamma-glutamate-cysteine ligase was constructed by using Amber 14. It is demonstrated in ribbon diagram which is done by interpolating a smooth curve through the polypeptide backbone. The colors indicate the amino acids in the protein structure.

Our circuit design for GSH gene

Our circuit consists of prefix, a strong promoter (J23100), RBS (B0034), GSH as protein coding region, double terminator (B0015) and suffix. This part enables our E. coli KO11 strain to overexpress oxidised Glutathione to reduce oxidative stress, increasing its lifespan (Lu, 2013). Our construct was inserted into pSB1C3 and delivered to the Registry.

We’ve inserted the GSH composite part to pSB1C3 backbone. Then, we’ve transformed the construct for submission, BBa_K2571005, (in pSB1C3) to Dh4 alpha and conducted colony PCR. We’ve prepared the PCR with GSH specific primers and expected to see a result of 225 bp. By showing the band we expected, 225 bp, PCR confirmation for our insertion proved right.

Dual Expression of FucO and GSH

The first protein coding region we have, placed after the RBS, FucO, will code for L-1,2-propanediol oxidoreductase (a homodimer enzyme) in order to act upon furfural presence in the field (Zheng, 2013). The metabolism of furfural by NAD(P)H-dependent oxidoreductases will reduce the toxicity of the chemical by turning it into a derivative, furfuryl alcohol, and increase the furfural tolerance (Zheng, 2013; Wang et al., 2013; Allen et al., 2010). Our second protein coding region, bifunctional gamma-glutamate-cysteine ligase/Glutathione synthetase (GSH), is a non-protein thiol group and a tripeptide composed of cysteine, glycine and glutamic acid (Lu, 2013). It is crucial for the detoxification of reactive oxygen species and free radicals (Ask et al. 2013). Reactive oxygen species (ROS) are harmful substances that alter protein based matters by taking electrons (Lu, 2013; Burton & Jauniaux, 2011). Because many benefits of GSH include scavenging of ROS, protection against endogenous toxic metabolites and detoxification of xenobiotics, we choose this gene to integrate with FucO (Höck et al., 2013). Thus we constructed a multi-functional gene providing long life span and resistance.

Our construct for composite part 3 is composed of two stages, first the reduction of furans (specifically furfural and 5-HMF) and second the detoxification of reactive oxygen species (ROS). To achieve this effect, we designed our composite 3 part as with a prefix, a strong promoter (J23100), RBS (B0034), FucO as the first protein coding region (BBa_K2571003), RBS (B0034), GSH as the second protein coding region (BBa_K2571005), double terminator (B0015) and suffix.

Given that FucO is NADH-dependent, it outperforms other oxidoreductases by not interfering with the NADPH metabolism of the organism while converting highly toxic substances, furfural and 5-HMF to non-harmful alcohols. This characteristic of FucO is crucial because the expression of oxidoreductases like Yqhd are NADPH-dependent, hence they compete with the biosynthesis for NADPH, which results in inhibiting the growth of the organism.

Glutathione, on the other hand, is recycled using NAD(P)H pathways and since its over-expression with NADH metabolism not being altered thanks to FucO, antioxidant capacity of the cell will be increased dramatically; resulting in amplified immunity to both furans and ROS, habilitated cell growth and increased ethanol yield by the virtue of increasing cell mass and reproduction, and improved metabolism.

We’ve inserted our composite part 3(BBa_K2571006) in both pSB1C3 and pSB1A3 backbones. The construct in pSB1C3 is for submission to registry and is cultivated in DH5 alpha. The plasmid having pSB1A3 as backbone, thus carrying ampicillin resistance is for our biochemical assays since we’ve chosen the chassis organism for assays as E.coli strain KO11 which already has Chloramphenicol resistance in its genome. After cloning our genes, we’ve made colony PCR to verify our insertions. We chose the primers as FucO specific since the composite 3 contains FucO coding region. Expected band length was 194 bp, and as expected, the bands were given by all of the DH5 alpha and KO11 colonies we chose, confirming our transformations.