Modeling in synthetic biology is a crucial tool that helps us to get a comprehensive vision of biological systems and the working principles while providing ways to improve the system. In our case, it significantly led to the design of our project while improving the part choices. In our project we aimed to improve the second generation bioethanol production in which pretreatment process are constructed, from microbial fermentation by increasing the lifespan and productivity of bacteria. In our project, we used E.coli KO11 which is an ethanologenic bacteria thus appropriate for our goal. However, because we designed our gene circuit not just for KO11 but also for other E.coli strains, the modeling was constructed while considering the overall properties of them. While doing so, we used kinetic and visual models to design our gene circuit, calculating the expected behaviours and demonstrating our system.

What we have achieved

1- We constructed our gene circuit with the help of toxicity analysis and enzymatic reaction kinetics.

2- We used microbial growth and fermentation kinetics to simulate the expected behaviors of our system and the effects of our genes with the data obtained from our wet lab team.

3- We improved the understanding of our project by demonstrating the pathways and effects of our genes .

Formation of Our Kinetic Models

We decided to use Monod equation for the cell growth to demonstrate the effects of our genes in which the cell concentration over time depends on the number of cells (X) and the substrate concentration (S) along with several parameters such as Monod Constant (Ks) and maximum specific growth rate (μmax).

We decided to use Michaelis and Menten kinetics for the modeling of enzymatic reactions. Thanks to the kinetic model it was possible to estimate the affinity of our genes and the rate of reaction that led us to determine the proper genes for our gene circuit.

Ethanol production rate depends on the cell and substrate concentration. We also considered the mutual inhibition of xylose and glucose fermentation along with the alcohol inhibition. Furthermore, because even when the glucose is consumed completely, the xylose utilization is slower, the phenomenon is shown with a constant (Olsson, Hagerdalt & Zacchi, 1995). Thus, we used the formula developed by Olsson, Hagerdalt & Zacchi (1995) in which the xylose and glucose fermentation was calculated separately and then simultaneously.

Our main issue was determining the genes that would have a positive effect on bacterial fermentation. Thus, we analyzed the toxicity of different inhibitory molecules and substances produced during pretreatment: Furfural, 5-hydroxymethylfurfural (5-HMF) and aliphatic acids; such as formic acid, and levulinic acid. 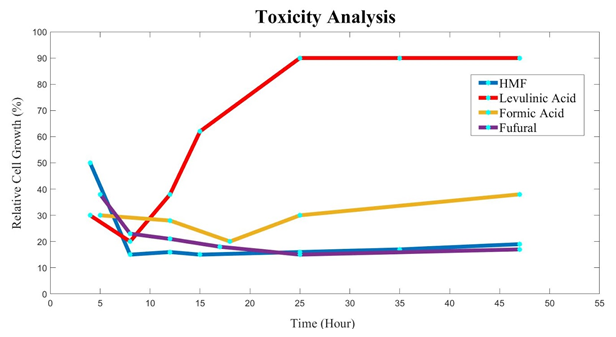 Formic acid and Levulinic acid were shown to inhibit the growth significantly but furans were worse (Kim et al., 2013). Hence, we chose to focus on furans. When we discard the lag caused by the inhibitors and focus on the last state, it was possible to calculate what percentage the cell growth was inhibited. Furans (Furfural and HMF) showed approximately 80% inhibition which is the highest number among thus we decided to increase the tolerance of E.coli to furans.

According to the analysis, furans were found to be the most toxic substances when it comes to cell growth (Kim et al., 2013). The most used pretreatment process, dilute acid, gives rise to the formation of furanic aldehydes (Palmqvist and Hahn-Hagerdal, 2000; Larsson et al., 1999; Thomsen et al., 2009; Klinke et al., 2004). They are highly reactive, contributing to the birth of reactive oxygen species (ROS) which damage proteins, nucleic acids and cell organelles (Wierckx et al., 2011). Because of the toxicity provided by furans, cell mass and productivity of fermentation decreases (Almeida et al., 2009; Palmqvist and Hahn-Hagerdal, 2000b; Thomsen et al., 2009). Thus, we examined the pathways of furfural and HMF to find a way to eliminate the setbacks and increase the tolerance.

It was shown that furfural can be reduced to a less toxic form, furfuryl alcohol, by NAD(P)H dependent oxidoreductases which are transcribed by FucO and YqhD genes (Wierckx et al., 2011). The pathways are shown below: 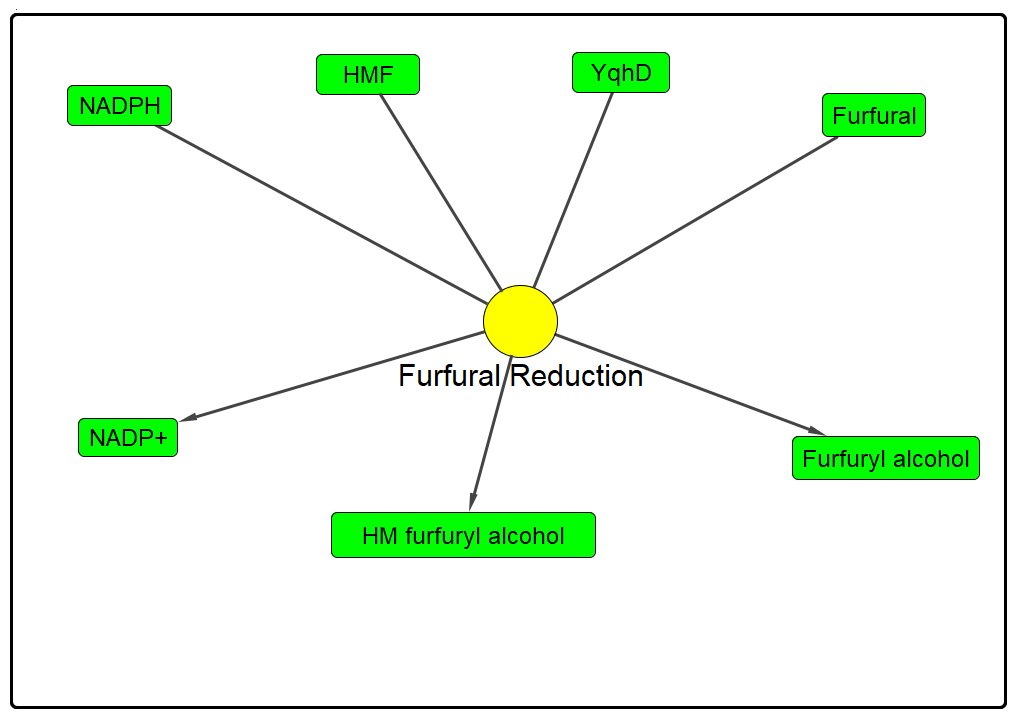 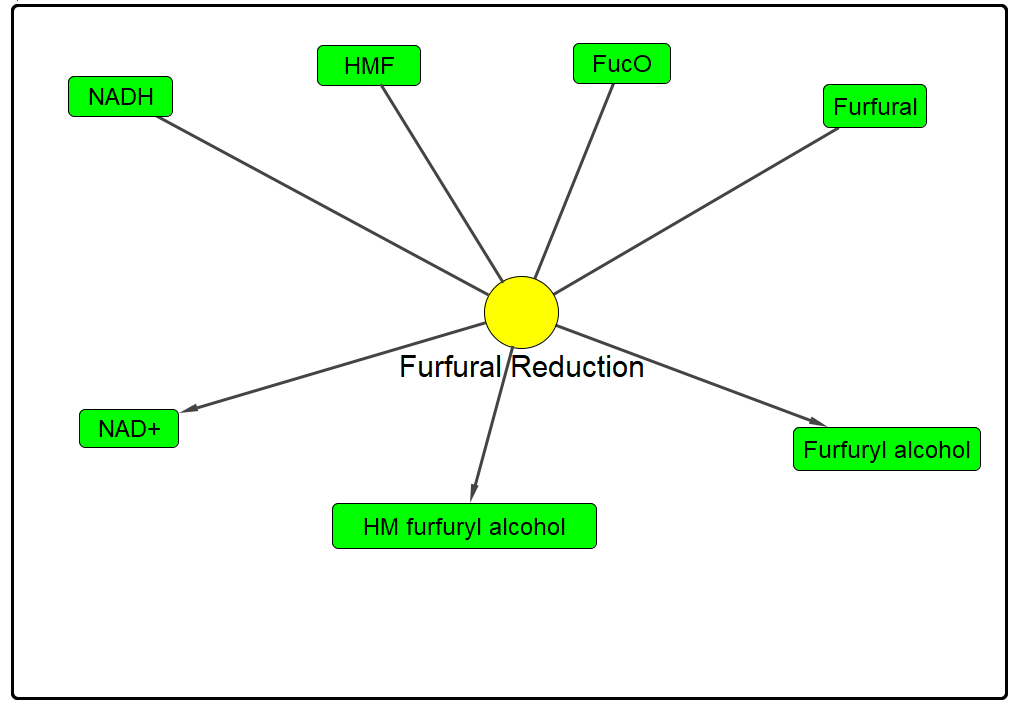 The comparison between the reaction rate and Km values of furfural and HMF reductions with different oxidoreductases were done by Michaelis-Menten kinetics and Lineweaver-Burk plot with the data obtained from Miller et al. (2009) and Wang et al. (2011). Matlab’s enzkin function was used to evaluate the results.

It was important to find the appropriate NAD(P)H dependent oxidoreductase that would decrease the harmful effects of furans thus resulting in the improvement on rate of cell mass and bioethanol production (Jarboe et al., 2012; Wang et al., 2011). Therefore we analyzed the reaction kinetics of both FucO (NADH dependent) and YqhD (NADP dependent) with the Michaelis and Menten enzyme kinetics and Lineweaver - Burk plot. At first, we looked through the Km values because they indicate the affinity of enzymes which means that if you have a low Km value then the enzyme is more likely to catalyze the reactions faster and properly (Jarboe et al., 2012). YqhD showed a Km of 5.00 +- 3 mM where Km of FucO was 0.4+- 0.2 mM (Wang et al., 2011). It was shown that that FucO has higher affinity to furfural and is more likely to increase the furfural tolerance (Jarboe et al., 2012 ; Wang et al., 2011). Moreover, YqhD has higher Km for NADPH than most of the key metabolic enzymes such as CysJ (80 μM), which is necessary for sulfate assimilation to form cysteine and methionine; ThrA (90 μM), is important for the formation of threonine; and DapB (17 μM), required for lysine formation (Miller et al.,2009; Jarboe et al., 2012). Therefore, the utilization of YqhD inhibits the growth of the bacteria due to the competition with the important biosynthetic enzymes (Miller et al.,2009). Though, YqhD is found in most of the E.coli strains, due to its lower affinity compared to the FucO, it is possible to eliminate the YqhD gene by the overexpression of FucO (Jarboe et al., 2012). Thus we decided to use the FucO gene coding for L-1,2-propanediol oxidoreductase that is responsible for the furanic compound degradation. Moreover, because furans’ high reactiveness eventually leads to the formation of ROS, the GSH gene producing glutathione synthetase was decided to be utilized in order to decrease the harmful effects and raise tolerance to environmental toxicity.

GSH gene codes for Bifunctional gamma-glutamate-cysteine ligase/glutathione synthetase which is responsible for the mass production of the main antioxidant, glutathione. It is one of the most important antioxidant that works in order to reduce ROSs that are produced during metabolic activities such as furfural reduction and fermentation (Pizzorno, 2014; Forman, 2009). It prevents oxidative stress from building up in the cell metabolism which causes cell damage and eventually, death (Pizzorno, 2014; Forman, 2009). The pathway of glutathione synthetase and glutathione are demonstrated below along with the effects of glutathione on cell mass: 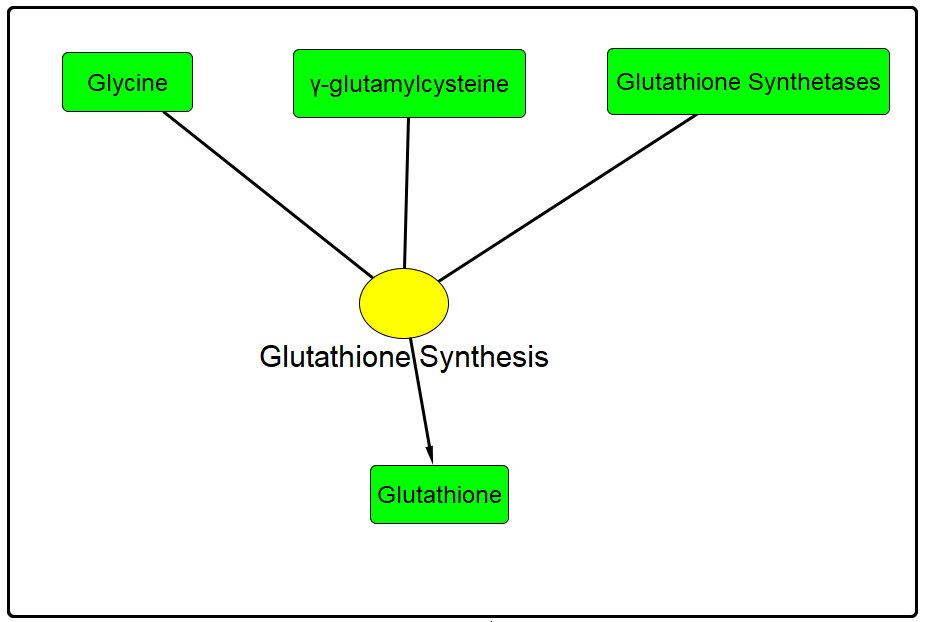 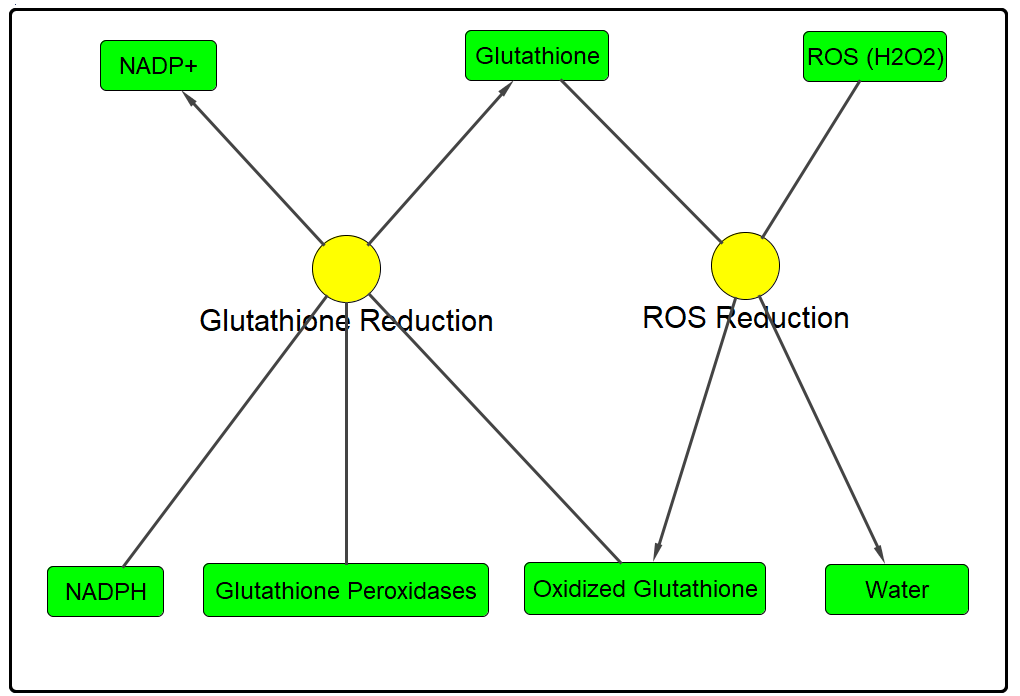 Figure 7: Glutathione reduces ROS while producing Water and turning into Oxidized Glutathione which is later become glutathione by glutathione peroxidases and during the process NADPH metabolism is utilized.

Then, we looked through the effects of glutathione on cell mass in order to observe the improving features of glutathione with the data obtained from Kim & Hahn (2013). In brief even 2mM difference make 30% increase in cell mass which is demonstrated below(Kim & Hahn, 2013).

Jez, J.M. & Cahoon, R.E (2004) stated that the km values of Glutathione Synthetase(GS) were 39 ± 5 μm for y-glutamyl cysteine and 1510 ± 88 μm for glycine meaning that GS has low affinity to glycine resulting in problematic production of glutathione and low reaction rate. In order to increase the reaction rate and glutathione formation we decided to enhance the gene expression rate by using a strong promoter and RBS. Thus, we looked through the existing promoters and RBS in iGEM database and examined their strengths which were compared by LMU-Munich 2012 iGEM team and the Alverno_Ca team. 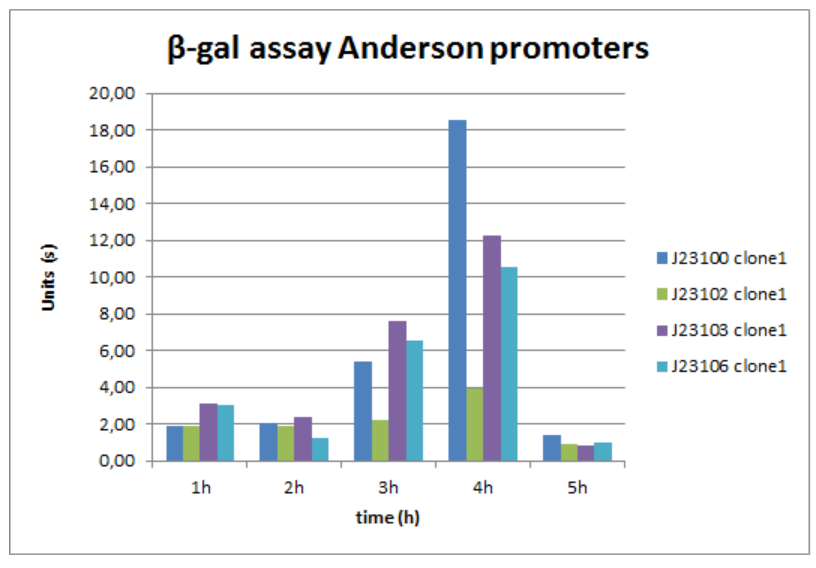 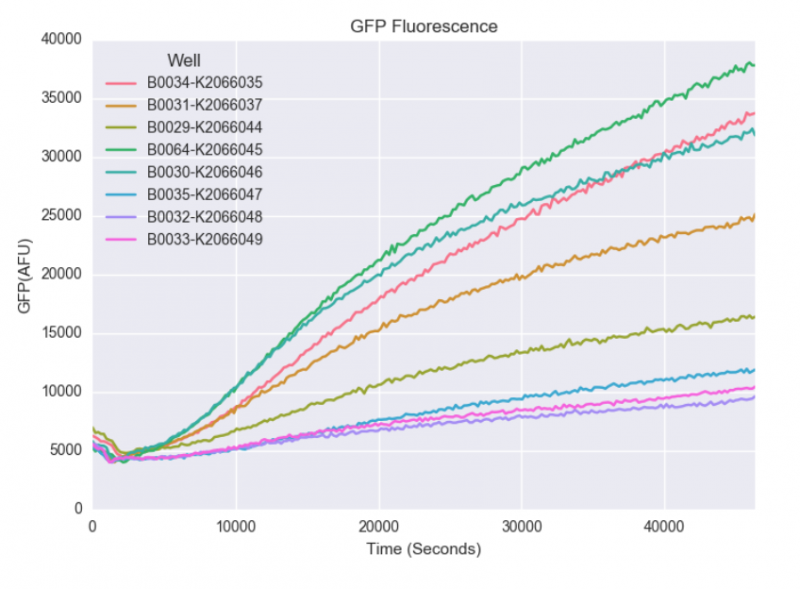 In order to obtain the parameters, Monod growth model is linearized by inverting and factoring out umax and we get the Lineweaver-Burk plot (Rorke & Kana, 2017 ).

Furthermore, instead of just a point estimate of the fit, we wanted study the predictive posterior distribution of the model. By them we calculated the model fit for a randomly selected subset of the chain and calculate the predictive envelope of the model. The grey areas in the plot correspond to 50%, 90%, 95%, and 99% posterior regions with the data obtained from Olsson, Hagerdalt & Zacchi (1995) for un-engineered E.coli KO11.

Figure 11: Predictive envelopes of our model.

After determining the parameters, we used Monod equation with the fit data to demonstrate the cell growth.

Figure 13: Monod equation that is redesigned by our experimental data for E.coli KO11 with FucO gene inserted.

Figure 14: Monod equation that is redesigned by our experimental data for E.coli KO11 with GSH gene inserted.

Figure 15: Monod equation that is redesigned by our experimental data for E.coli KO11 with both GSH and FucO gene inserted.

Ethanol production rate depends on the cell mass, sugar concentration and the inhibitor substances (Olsson, Hagerdalt & Zacchi, 1995). In our project, the improvement of ethanol production was decided to be accomplished by increasing the tolerance of bacteria to inhibitors. Thus, the kinetic module developed by Olsson, Hagerdalt & Zacchi (1995) was used to emphasize the expected ethanol production rate of normal and improved E.coli KO11. Because we couldn’t construct a fermentation experiment, we used the parameters’ value from Olsson, Hagerdalt & Zacchi (1995) which were obtained from the utilization of KO11 in toxic substances. The Monod equation which was redesigned by our experimental data, was integrated into the fermentation kinetic model. The kinetic model were constructed by Matlab and shown below.

Figure 17: Fermentation kinetic model that is redesigned by our experimental data for E.coli KO11 with FucO gene inserted.

Figure 18: Fermentation kinetic model that is redesigned by our experimental data for E.coli KO11 with GSH gene inserted.

Figure 18: Fermentation kinetic model that is redesigned by our experimental data for E.coli KO11 with both GSH and FucO gene inserted.

According to our kinetic models, the best ethanol yield was shown with the dual expression of FucO and GSH gene and demonstrated by fermentation model while portraying the expected results.