Mathematic model helps us to predict the reaction result before experiment. First of all, we have to define which kinetic law can be applied into which metabolic pathway and chemical equation. There are three kinds of kinetic we chose in this model, mass action, Henri-Michaelis-Menten, and Ping-Pong-Bi-Bi.

In 1913, Michaelis and Menten studied the invertase system and found some behavioral patterns of enzyme-matrix reaction. When the enzyme is catalyzed, the matrix will be combined with the enzyme to generate the product. However, the binding of the enzyme to the matrix is reversible. The concentration of ES will be constant when the reaction is steady state. They also proposed the mathematical description of the behavior of the enzyme. They can express the relationship between the reaction rate and the enzyme mathematically. Hence, the reaction rate is in a hyperbolic relationship with the concentration of substrate at a fixed amount of enzyme. That is the Michaelis-Menten kinetic law.

A. The Henri-Michaelis-Menten kinetic law is expressed as follows:

The Enzyme (E) forms a Complex (ES) with the Substrate (S) and modifies it to the Product (P). The Product is then released and the Enzyme is free to perform another modification. This process is described by the ODE system.

The system cannot be solved analytically. Michaelis and Menten considered a quasi equilibrium between E and the ES-Complex to simplify the system.

where Vm represents the maximum rate achieved by the system, and the Km is the substrate concentration at which the reaction rate is half of Vm.

The constants vmax and Km can be looked up at the public data base BRENDA. The rate konstant k2 describes how many substrate molecules are transformed into product molecules per second and active site, it is thus called turnover number.

B. A more realistic description of a enzymatic reactions than pure Michaelis Menten Kinetics is given by considering the product forming reaction step as reversible.

The Enzyme (E) forms a Complex (ES) with the Substrate (S) and modifies it to the Product (P). In the reversible Michaelis-Menten reaction the Product can bind the enzyme again and react back to the substrate. This process is described by the ODE system.

For Ping-Pong-Bi-Bi, it is a double displacement reactions. Hence, there is more than one matrix in the reaction, and there may be several products for multi-matrix reactions in most of enzyme reactions. For example, S1 + S2 → P1 + P2. Binding of A and B are the different enzyme forms, E and F respectively. The double matrix reaction can still be applied to the Henri-Michaelis-Menten formula, but the Km of the two matrices should be determined separately. In addition, the concentration of S2 in the reaction should be saturated when S1 is measured.

Method of our Modeling

We choose the simbiology in matlab to develop our model. SimBiology provides an app and programmatic tools to model, simulate, and analyze dynamic systems which can easily applied on systems biology.

Pathway of our project 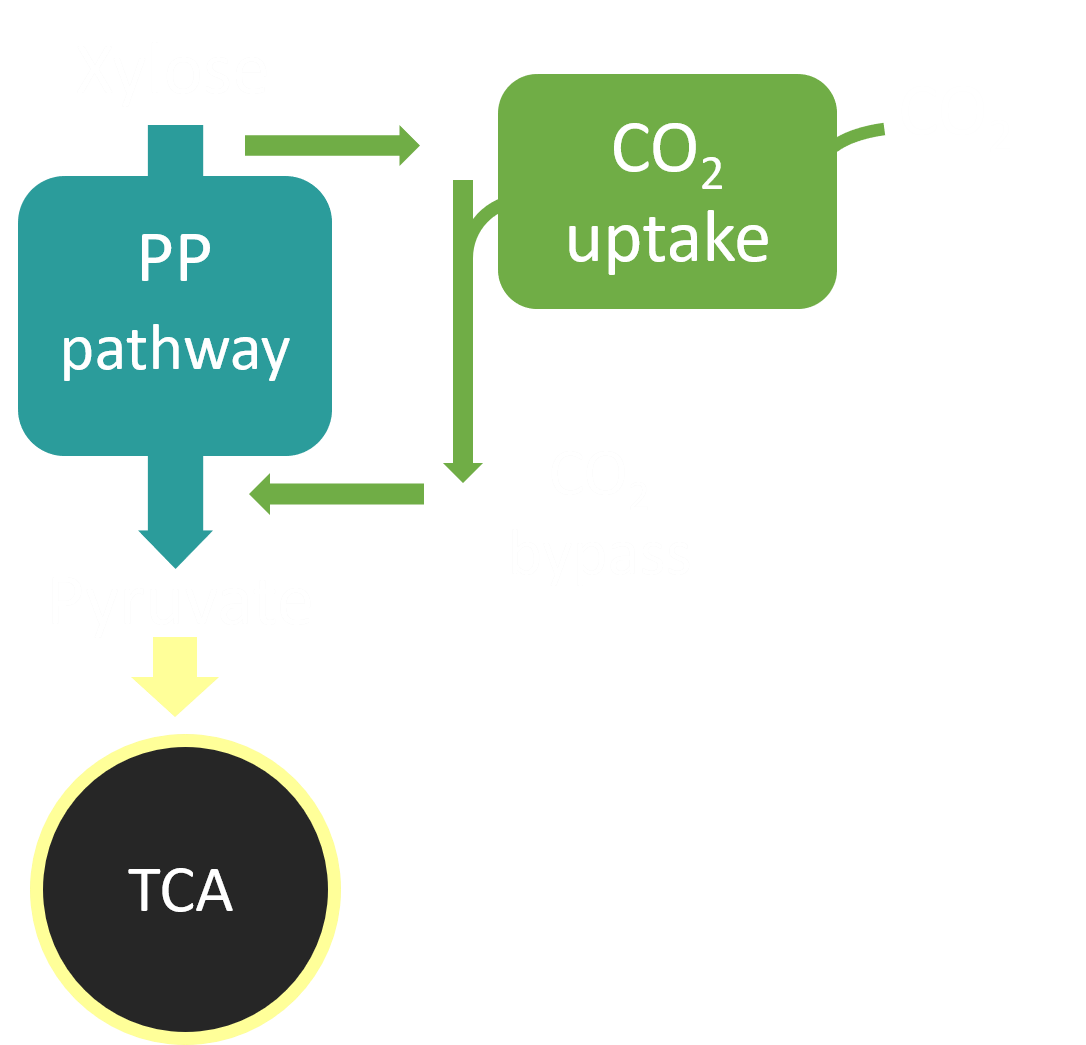 CO2 diffuse into cell can use Fick’s law.

J is the "diffusion flux," of which the dimension is amount of substance per unit area per unit time. D is the diffusion coefficient or diffusivity

After CO2 diffused into cell, it will have a reversible reaction.

That’s what CA catalyze the reversible interconversion of CO2 and HCO3-. Although some CAs prefer the direction of CO2 hydration, the carboxysomal CAs in cyanobacteria and some chemoautotrophic bacteria favor the direction of HCO3- dehydration. The result of model and our experiments showed that CA improve amount of CO2 uptake and CO2 utilization. 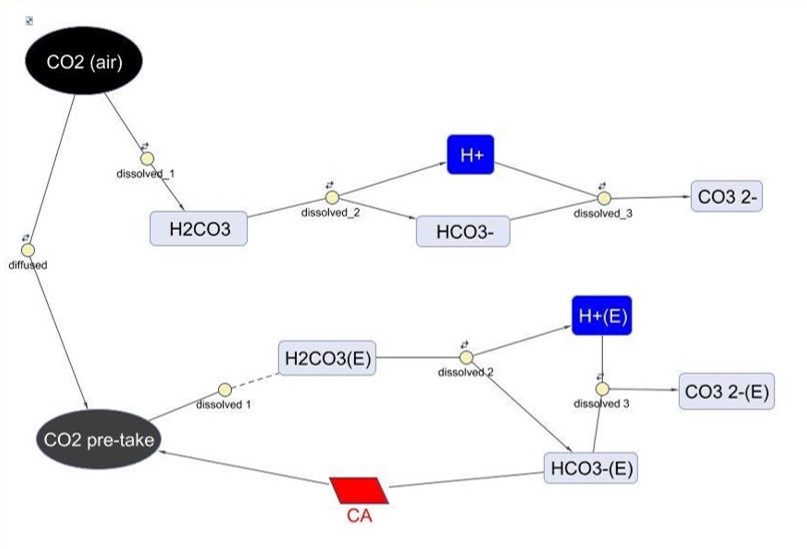 We clone our genes into E. coli to make it fix the carbon dioxide. The genes include PRK, Rubisco. On the other hand, we also want to produce the higher value product in our project. 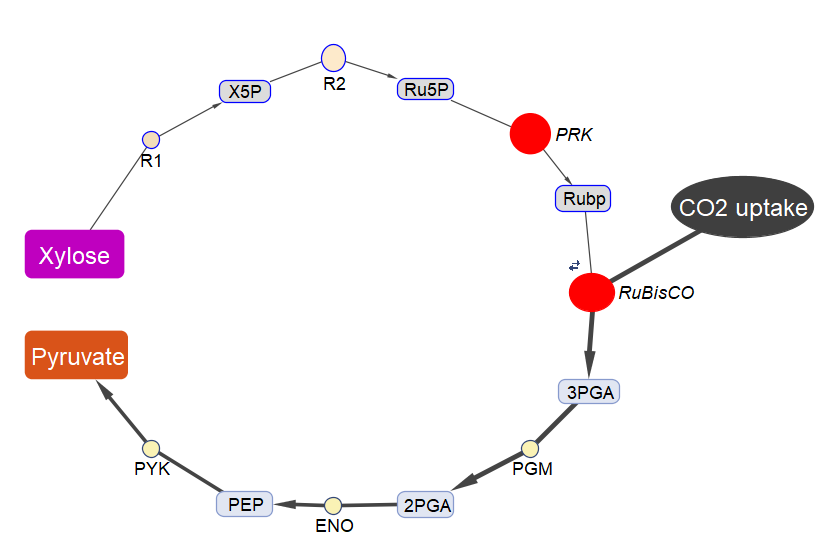 It’s a original pathway which xylose is consumed by E. coli. Basically, E. coli will comsume the xylose and then produce the temporary production, pyruvate. 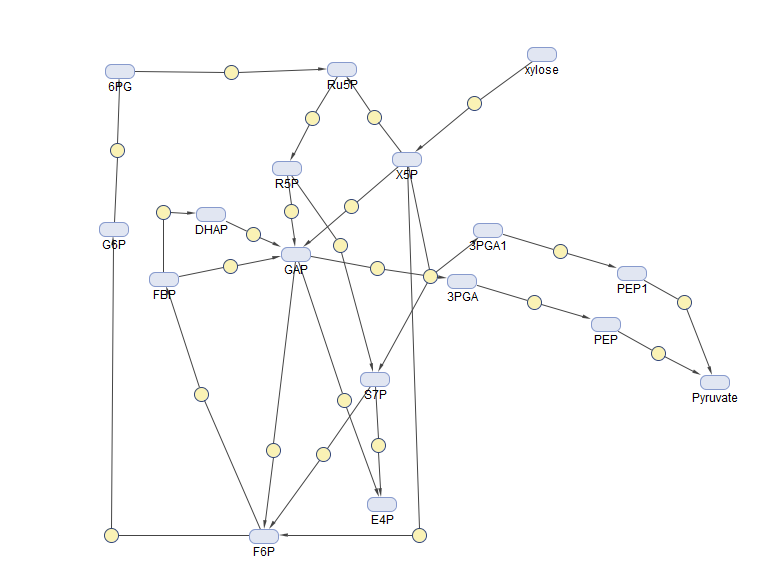 In Tricarboxylic acid cycle (TCA cycle), we can get final production in this cycle. The two carbons of Acetyl CoA are decomposed into carbon dioxide to produce energy, form ATP or GTP, and reduce NADH and FADH2, and then provide the energy needed for the reaction in the organism. 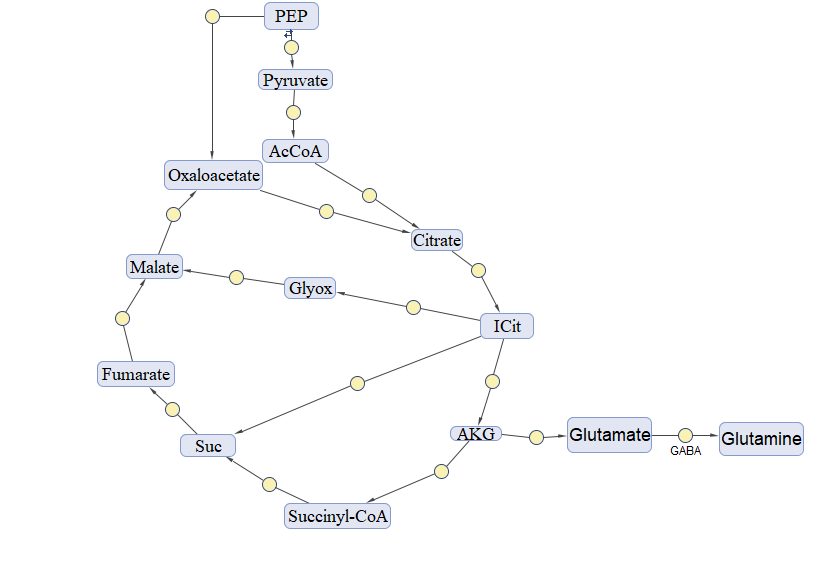 We built the whole xylose metabolism in our engineered E. coli, which help us calculate the rate of xylose will go into CO2 utilization bypass. The result of this model shows that CO2 uptake affect the production of pyruvate. We can confirm that our engineered E. coli successfully uptake CO2 while the increase rate of pyruvate production followed the experiment data. To see more analysis of CO2 utilization on analysis page. 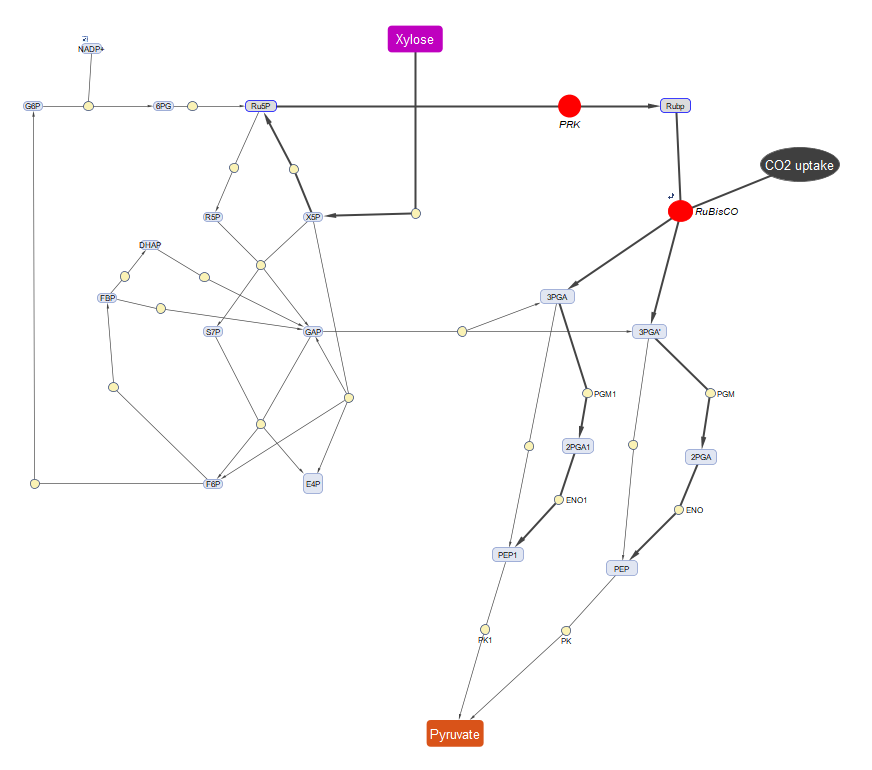 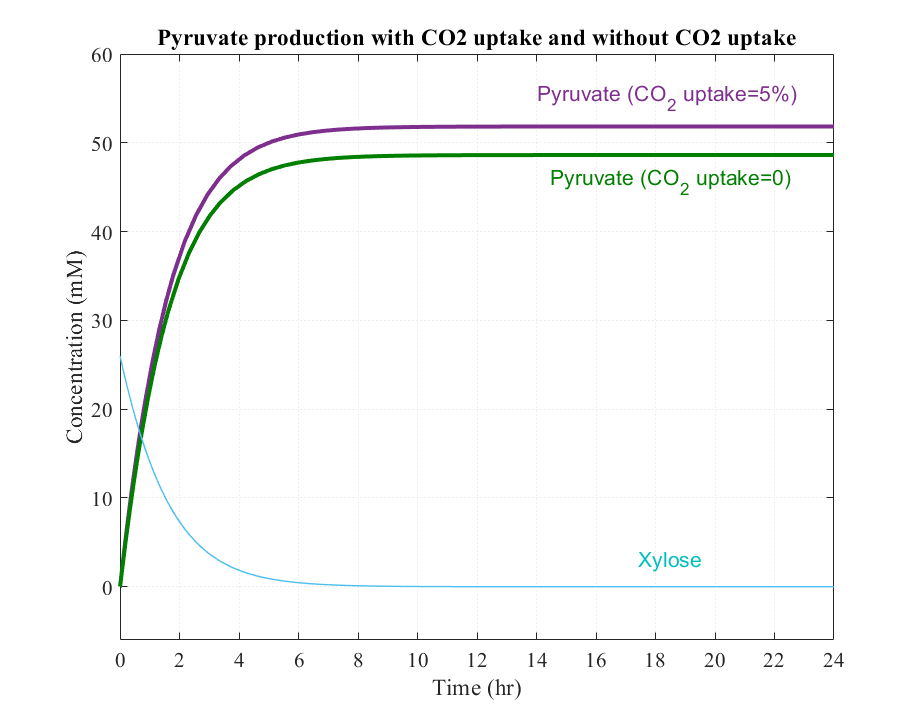