Overview of the result

We constructed prk fragments (BBa_K2762007) from IDT DNA synthesis. After PCR amplification, prk is then cloned into pSB1C3 and transformed into DH5 alpha. SDS-PAGE ensured that the protein expression was as expected. The results are shown below:

We initially decided to test its function by HPLC to measure the amount of RuBP inside the cell. Our instructors pointed out some difficulties in HPLC measurement such as excessive noise signal in our sample. We, therefore, determined to test its function with a toxicity test. The product of PRK, RuBP, cannot be metabolized by wild-type E. coli. The accumulation of RuBP depletes the sugar from the native pentose phosphate pathway. Lack of carbon source, the growth of that strain may be repressed. We incubate the PRK expressing strain and control stain that contains no plasmid in M9 medium and altered M9 medium with 4 (g/l) xylose as its sole carbon source. In normal M9 medium, glucose will not be converted into RuBP. In altered M9 medium, xylose will go through the native pathway and be converted into RuBP. Growth arrest of PRK strain should be observed.

We tested PRK in different strains. We first cloned prk into pSB1C3 and transformed into BL21 (DE3). After 12 hours, the strain without plasmid could grow up to 1.4 O.D.600 in altered M9 xylose medium. The strain that contains PRK can grow up to 0.75 O.D.600 in normal M9 medium either. In contrast, the PRK strain that grew in altered M9 xylose medium showed no growth at all. The result shows that PRK can suppress/inhibit the growth, which matches to our expectation. 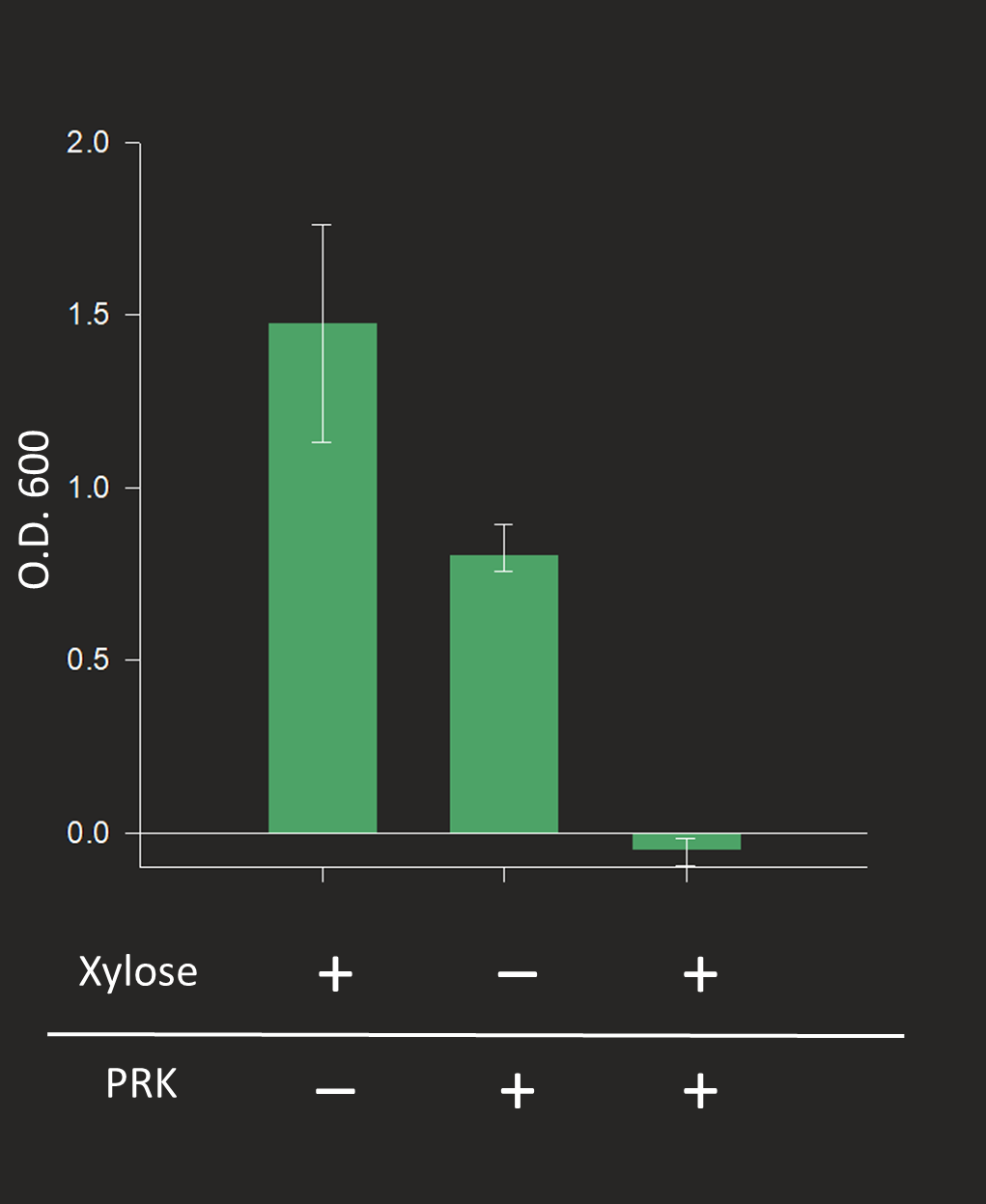 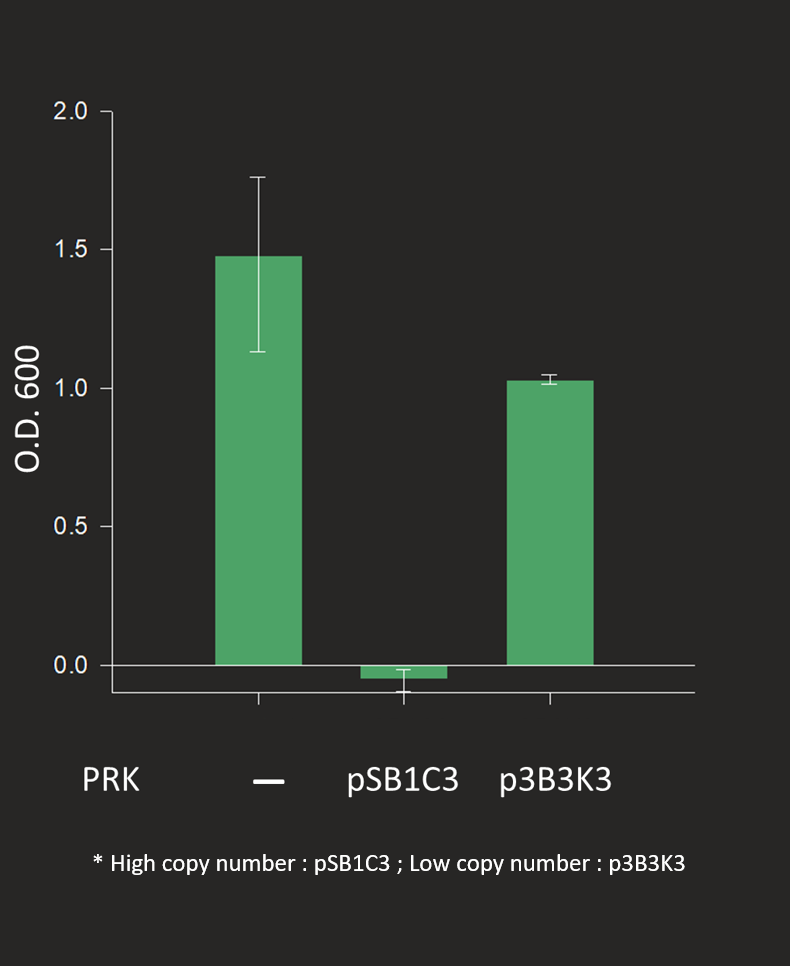 We also transformed pSB3K3-prk into W3110 strain. W3110 is reported to have higher pressure tolerance. The trend of the results is similar to that of the BL21 (DE3), but the difference between experiement and control group is not obvious . We deduce that PRK can still function in W3110 since the trend matches our expectation. As pSB3K3 is a low copy number plasmid, the expression of the protein may be lower than that of high copy number plasmid. The pressure tolerance of W3110 strain may also lessen the influence of toxicity by PRK. 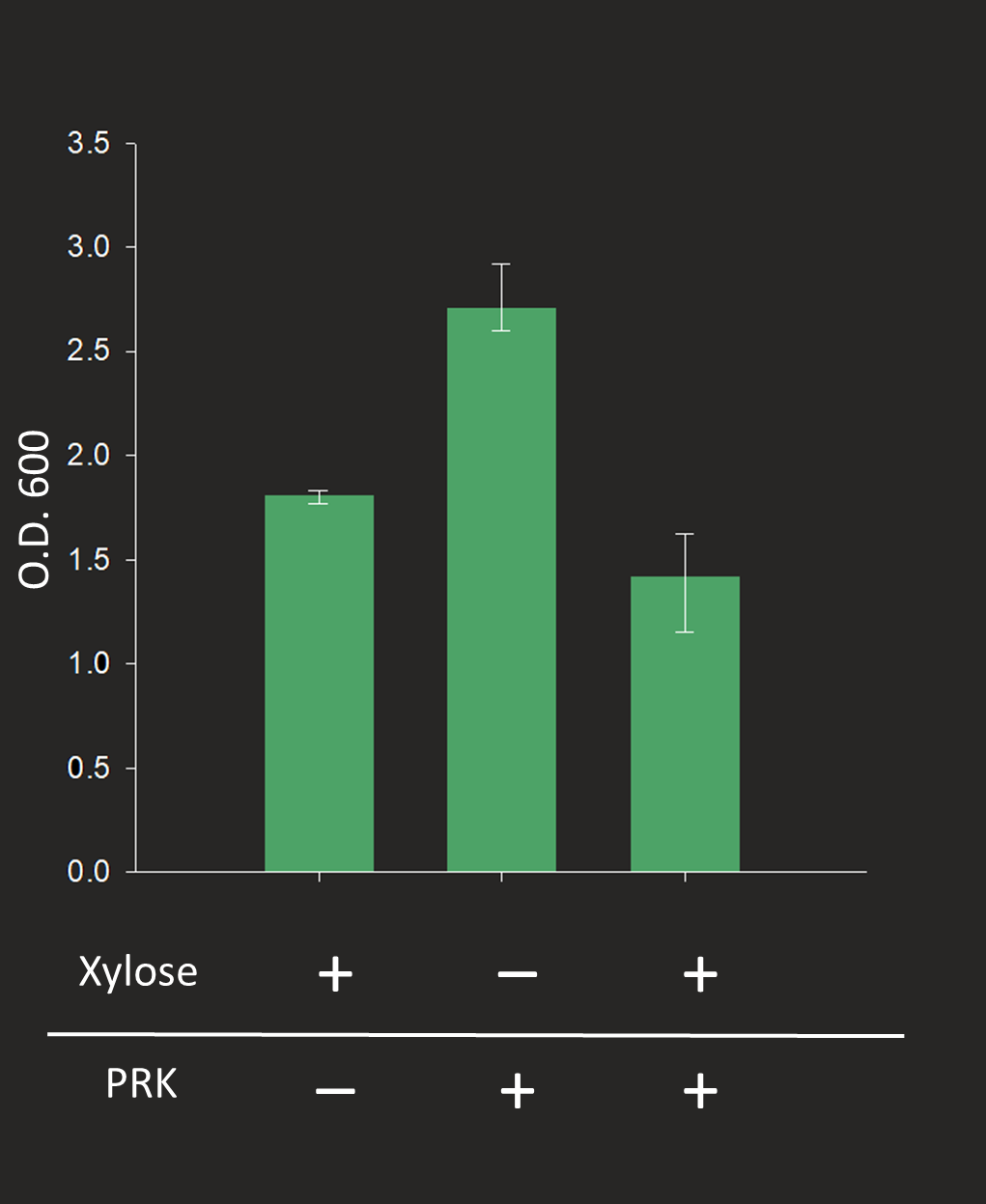 We cloned the DNA fragments (BBa_K2762008) into pSB1C3 plasmid after the gene is amplified with PCR. We transform the plasmid into DH5 alpha and BL21 (DE3). Next, we confirm its protein expression with SDS-PAGE.

We then ran the activity test of CA. In our bypass pathway, the function of CA is to convert proton and bicarbonate into water and carbon dioxide. CA activity was determined using the Wilbur-Anderson assay. Briefly, 9 mL ice-cold Tris−HCl (20 mM, pH8.3) buffer and 0.2 mL enzyme were mixed and transferred to a 20 mL sample bottle, with further incubation at 0 °C with stirring. Then, 6 mL of ice-cold CO2-saturated solution was added immediately into the sample bottle and the time course (sec) of pH decrease from 8.3 to 6.3 was recorded. CA activity was calculated using a Wilbur–Anderson unit (WAU) per milliliter of sample. The definition for WAU is (T0-T)/ (T0) in which T0 and T was the time required for the pH drop from 8.3 to 6.3, with and without CA, respectively. The enzyme activity of our CA is 21.8 unit/liter. To confirm the contribution of the CA to the whole pathway, we also ran the total solution which will be described in the following content.

We constructed rubisco fragments from IDT DNA synthesis. After PCR amplification of the three subunits, rubisco is then cloned into pSB1C3 and transformed into DH5 alpha. SDS-PAGE ensured that the protein expression was as expected. The results are shown below:


After mining a lot of information from the publications, we found out a method to determine the activity of Rubisco by thin-layer chromatographic has been reported. However, due to time concern, we are not capable of measuring the enzyme activity of Rubisco with this method. We finally confirm its function from the results of total solution test.

In the total solution experiment, we strive to measure the carbon fixation amount of each sample. After reading numerous publications, we found out that previous researches determine the efficiency of carbon fixation via measuring the decrease of carbon dioxide concentration in the closed system or measure the weight percentage of 14C radioisotope in the dry cell. However, due to biosafety constrain of our lab, we can barely use the radioisotope. Measuring the decrease of carbon dioxide concentration in the closed system is also impractical for us since we have too much test samples. A new method to measure multiple samples in the short period of time is developed by our team. We are able to evaluate the fixation efficiency of each sample with the optical density O.D. 600 and xylose consumption. We have measure various construction to prove that all the enzymes in our design is necessary for carbon fixation.

The bacteria samples in total solution test were incubated in an altered M9 medium which substitutes glucose to xylose. 1/1000 of LB medium was added to support the trace elements. Since the concentration of LB medium is too low, it doesn’t contribute the carbon source of the bacteria. 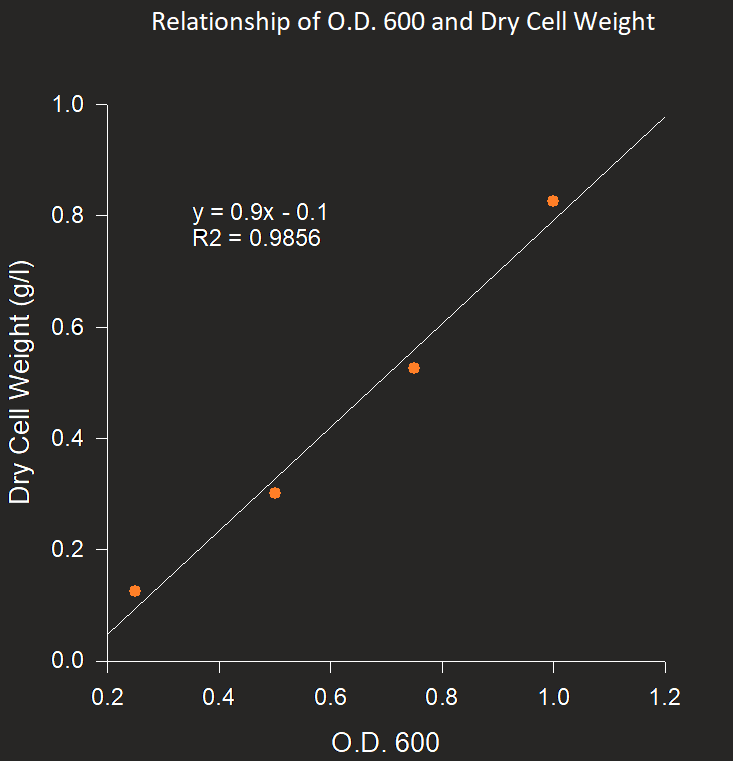 After these two assumptions, the Xylose Utilization Index is designed to evaluate the carbon fixation ability of each strain. The definition of the index is xylose consumption over O.D. 600. O.D. 600 measurement can be viewed as the weight of carbon of the bacteria. The index shows the ratio of xylose consumption per biomass. For wild-type E. coli, it only consumes xylose (the sole carbon source provided in our medium) as its carbon source. Although some native E. coli pathway may utilize CO2 (such as lipid synthesis), the amount is too small to consider. As for engineered strain, carbon dioxide can be utilized as it’s carbon source. By producing the same amount of carbon biomass, it requires less xylose. We can thus compare the XUI of each strain to determine the strain that fixes carbon. The less the XUI in the sample, the more possibility that it fixes carbon. 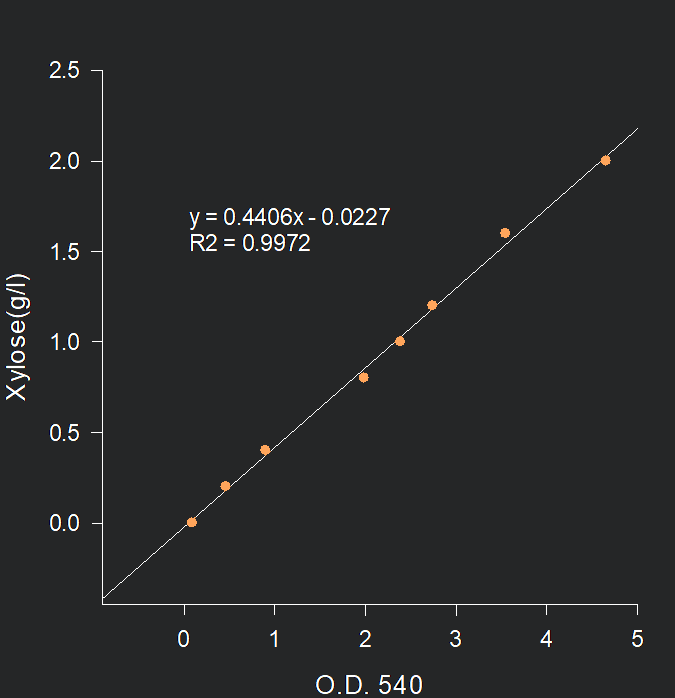 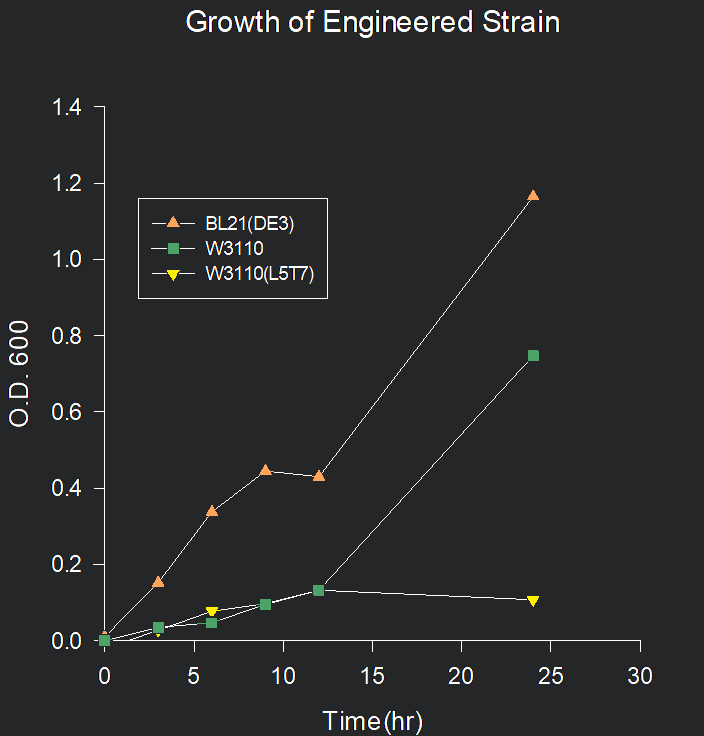 We then utilized XUI to evaluate the function of each enzyme in the pathway. We first check the function of Rubisco in BL21 (DE3) strain. Rubisco enzyme with promoter PT7 (BBa_K2762011) was cloned into pSB1C3 and PRK with promoter PLacI (BBa_K2762007) was cloned into pSB3K3. Both plasmids were then co-transformed into BL21 (DE3). We measured the XUI of the strain and compared them with the control group that IPTG was not added and BL21 (DE3) without plasmid. IPTG can induce the promoter PT7 to produce the downstream enzyme. The growth of each strain is first examined. The IPTG induced strain showed growth retard. We assume the cause of growth retard is due to the pressure from overexpressing the protein Rubisco. The control strain without IPTG induction produce less Rubisco enzyme than the experiment and has less pressure. We then compare the XUI of each strain and discovered that control strain without IPTG induction produces less Rubisco enzyme than the experiment. Without Rubisco, the bypass pathway is not capable of using CO2. We found out that the strain without Rubisco has higher XUI, symbolizing that Rubisco is essential in the carbon fixation pathway. 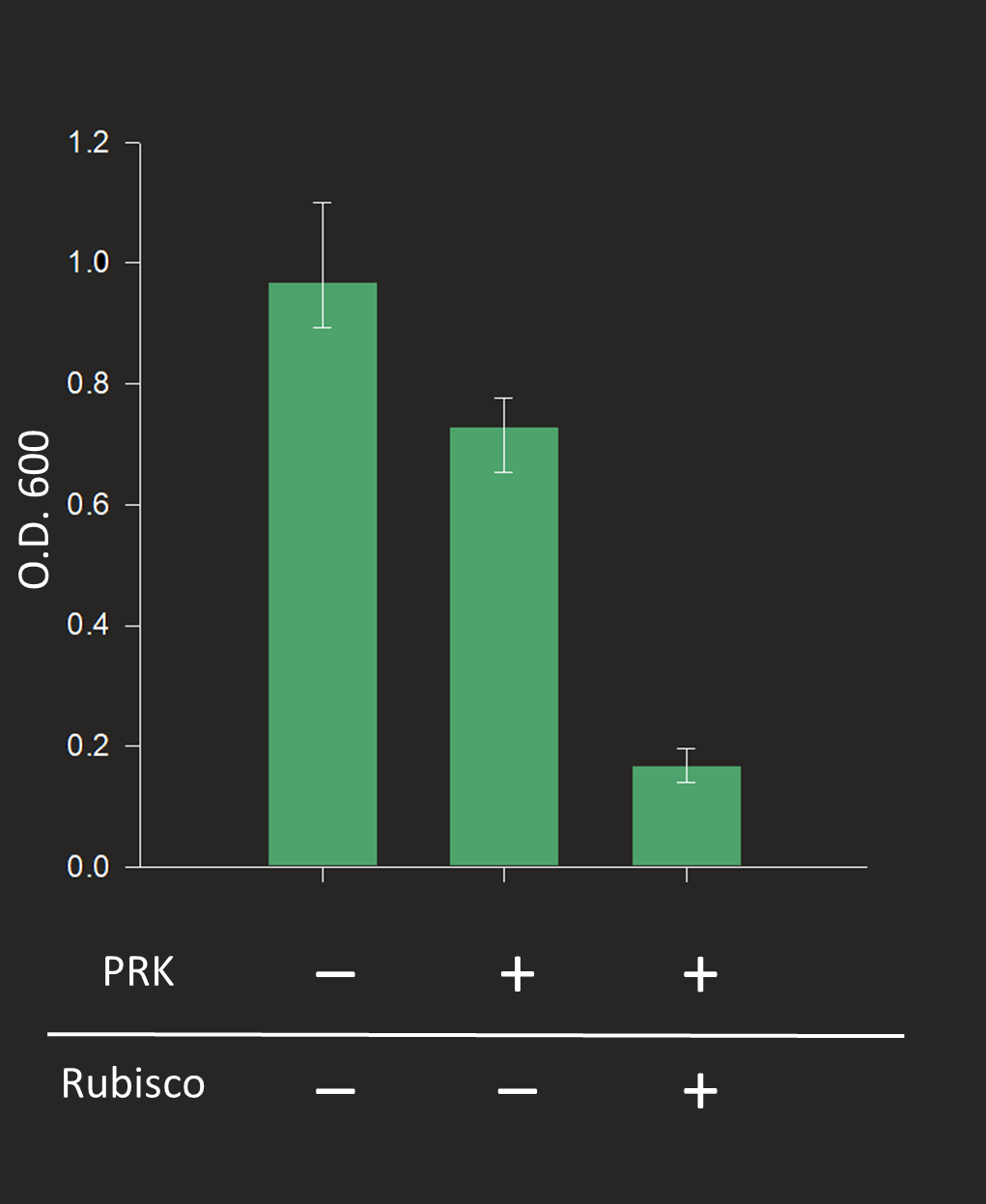 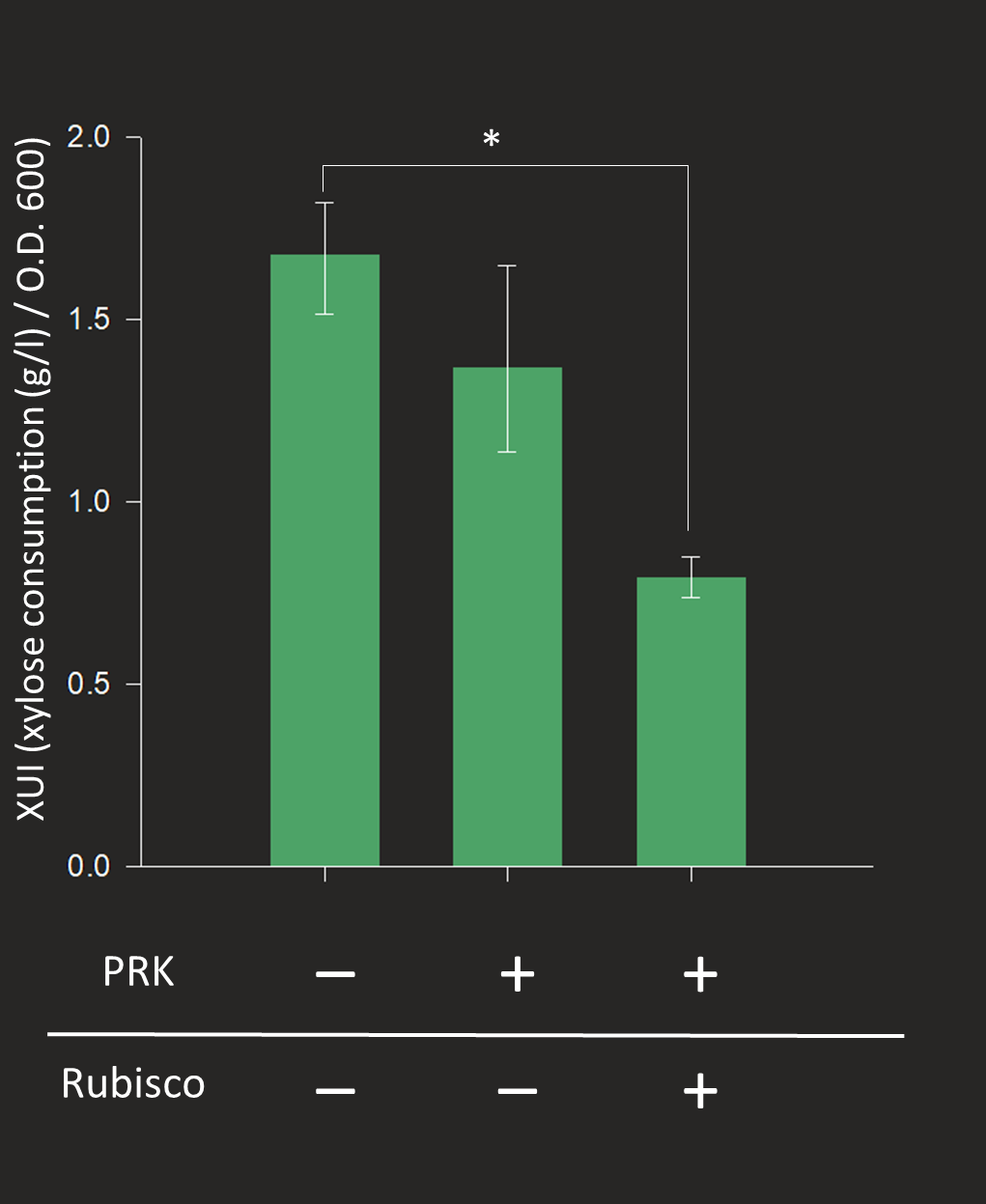 From the above results, we discovered that although Rubisco and PRK alone can enhance the utilization rate of carbon dioxide, the growth and utilization ability didn’t meet our expectations. The third important enzyme came into play: CA enzyme. We cloned Rubisco (BBa_K2762011) into pSB1C3 and cloned PRK with PLacI promoter and CA with PT7 promoter (BBa_K2762013) into pSB3K3. Two plasmids are then co-transformed into BL21 (DE3). We measured the XUI of this strain and compare with the previous strain that only contains PRK and Rubisco. We found out that CA can raise the growth and lower the XUI. We infer that CA can enhance the intracellular CO2 concentration and thus increase the carbon flux of the bypass pathway. The efficiency of the bypass pathway is thus been increased. 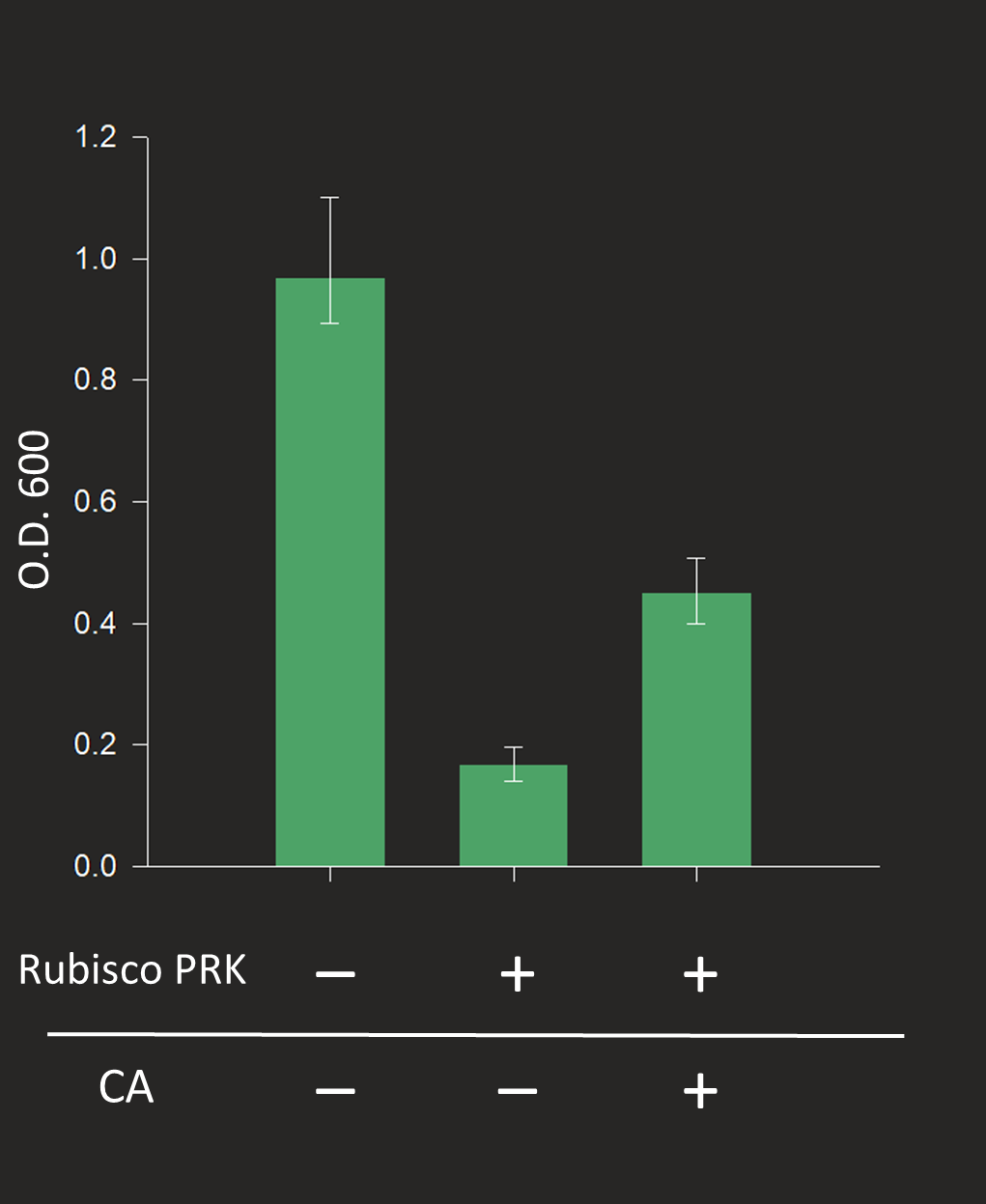 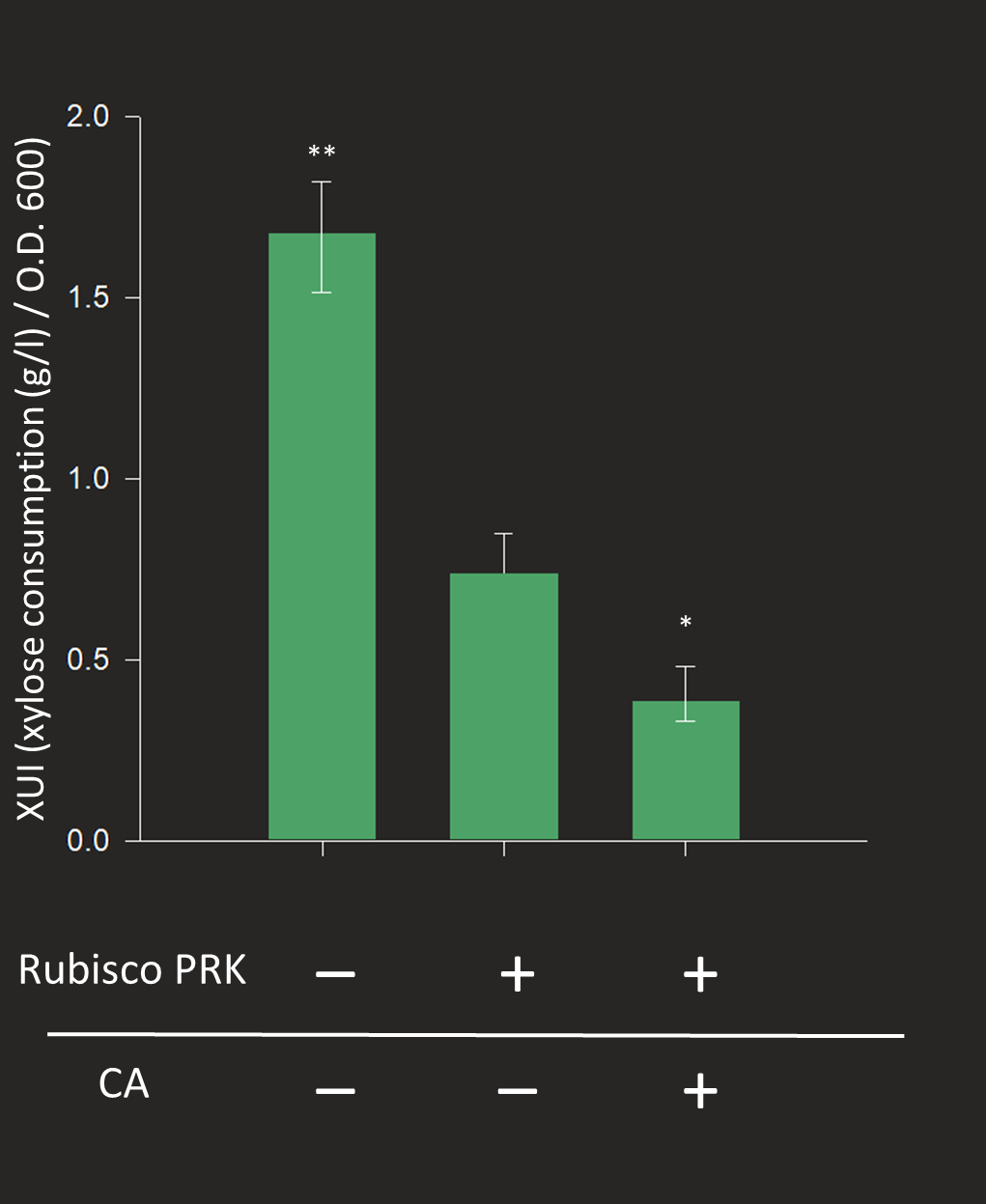 Fig 16. Shows the growth and XUI comparison of each strain. All the tested strains are incubated in 5% CO2 incubator for 12 hr. 0.1mM of IPTG was added to induce protein expression. We can observe that growth speed of the construction has been increased with the CA and the XUI of the strain that contains complete three enzymes was the lowest compared to the strain without plasmid or the strain that only contains PRK and Rubisco, stating that three enzymes are required to optimize the carbon fixing bypass pathway. 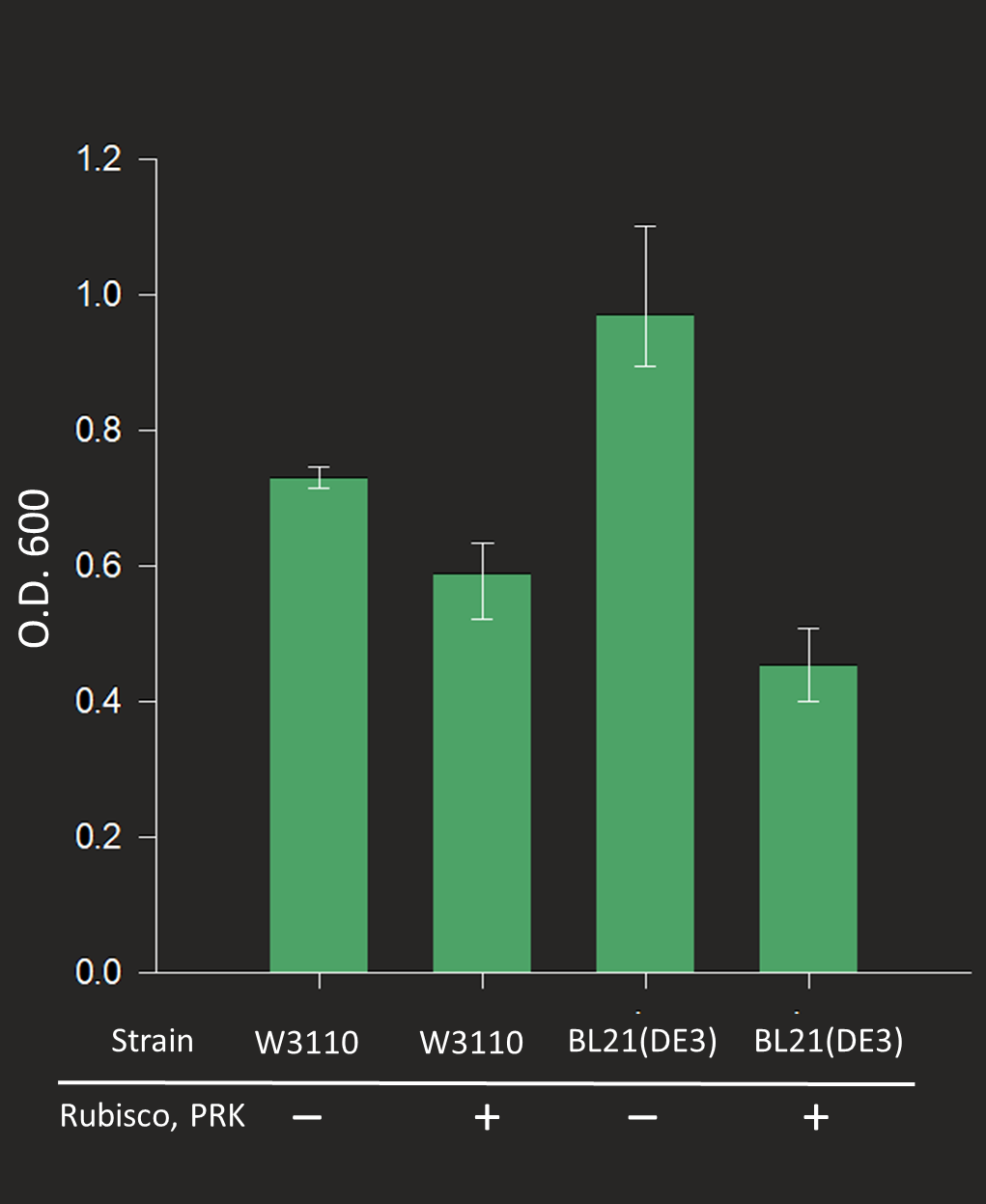 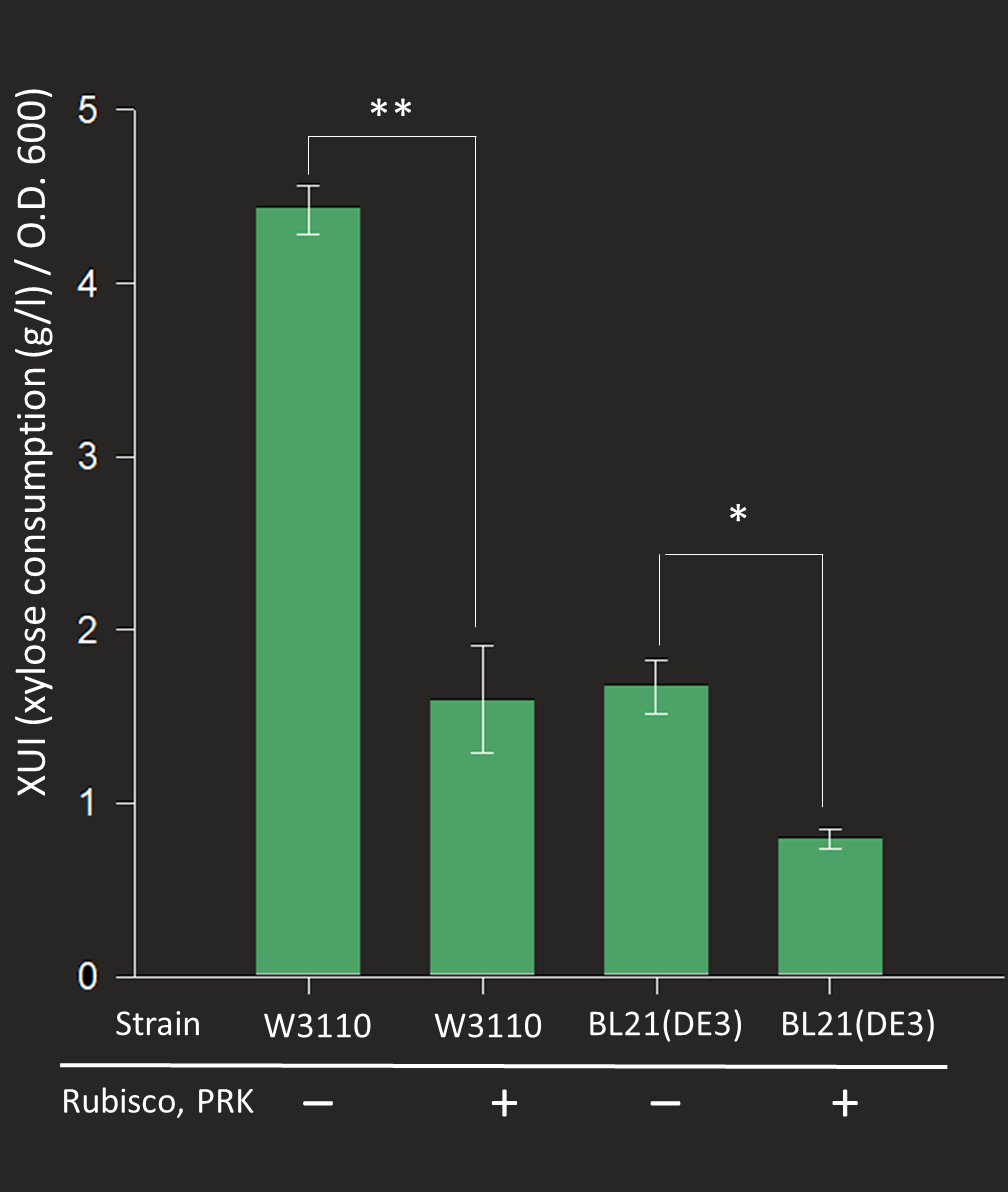 We finally concluded that the efficiency of the bypass pathway in BL21 (DE3) is better than that in the W3110 strain.

Finally, we compare the XUI under different CO2 concentration. We incubated the engineered bacteria in normal incubator without CO2 input and the cell culture incubator that maintains 5% CO2 concentration. We observed that the strain in 5% CO2 incubator has lower the XUI. The supply of sufficient CO2 can increase the efficiency of the bypass pathway and enhance the growth. We can conclude that our constructed pathway can utilize carbon dioxide as one of its carbon source from this result. 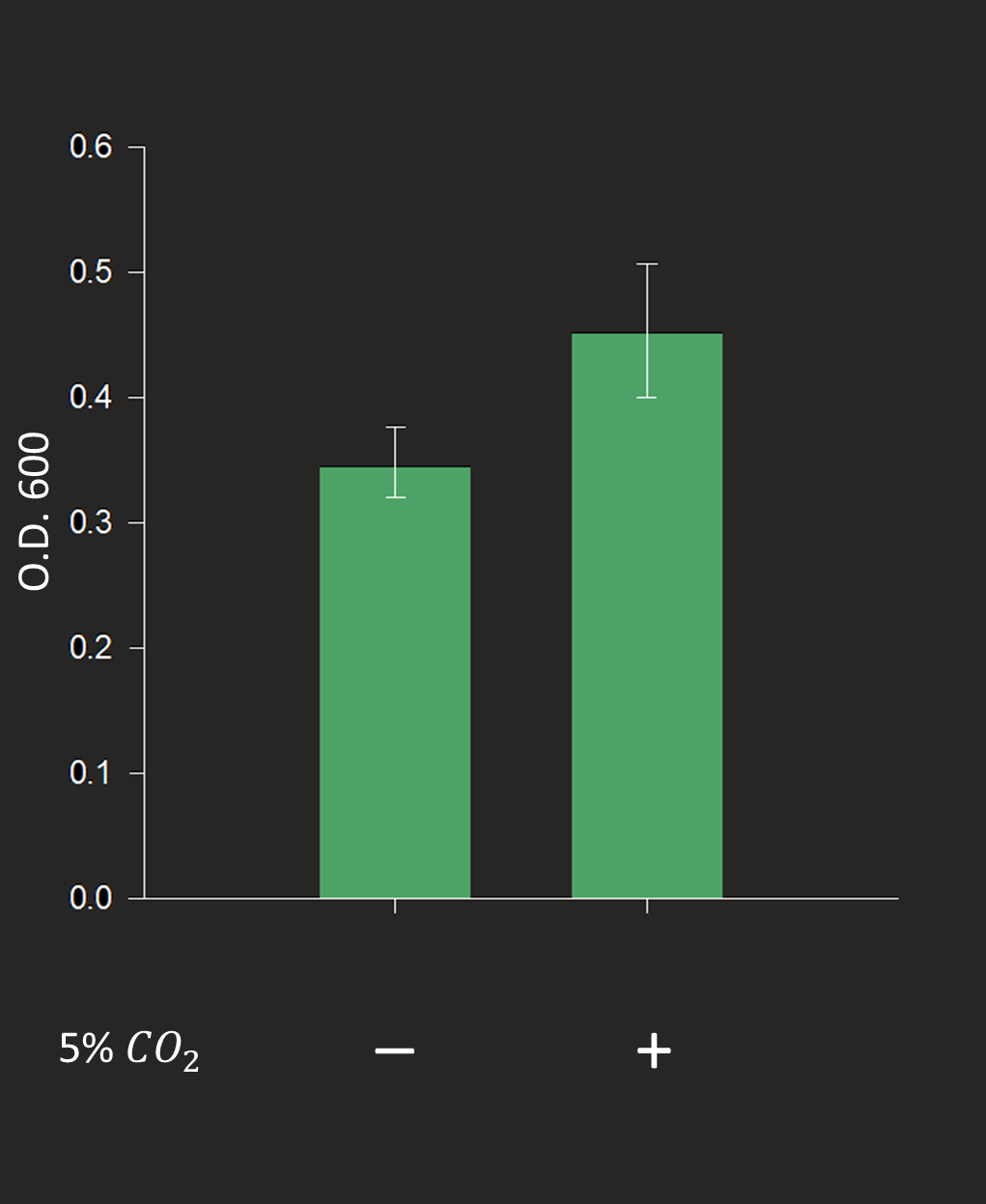 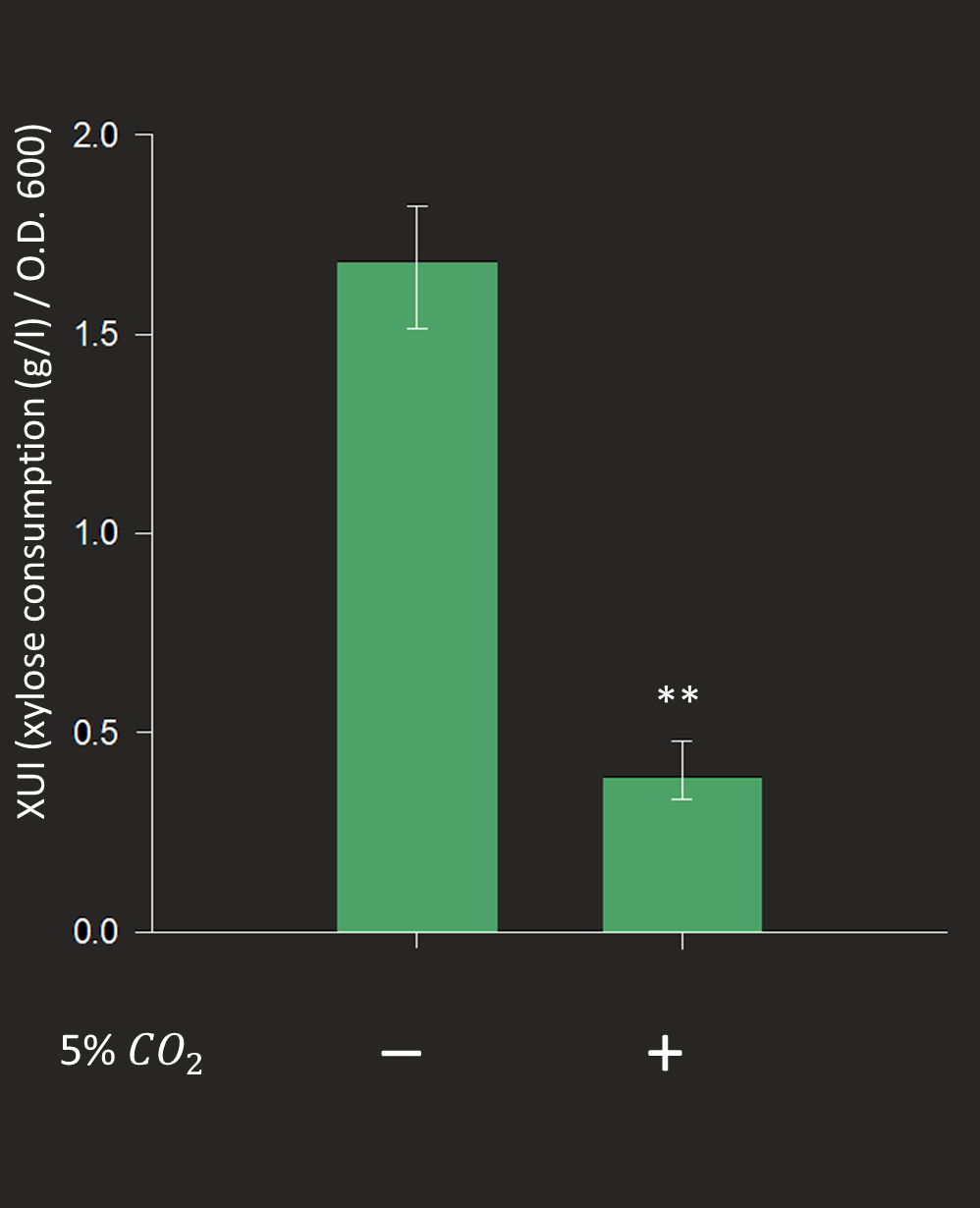 Fig 18. The comparison of the growth and the XUI of the BL21 (DE3) that contains all three enzymes in normal incubator and 5% CO2 incubator. The strain grown in CO2 incubator showed better growth and lower XUI, which indicates that our strain can use CO2 as a carbon source in the presence of high CO2 level.

Pasr (BBa_K1231000) is reported to be induced in acidic condition. We think that it can be used to report the abnormal acidity of the medium. We thus determine to measure the fluorescence intensity in a short period of time. We first incubated the bacteria to log phase (within 2 hour) with LB medium. We then centrifuged the broth and suspended the pellet with pH modified M9 medium (the pH value is modified with 1M HCl). We then took the sample and incubate in the 96 well and measure its fluorescence intensity for every 3 minutes. We found out that the promoter Pasr will be induced at the pH value below four within 30 minutes. The different fluorescence intensity can be observed within 30 minutes. The fluorescence had the peak at pH value of 4.25. 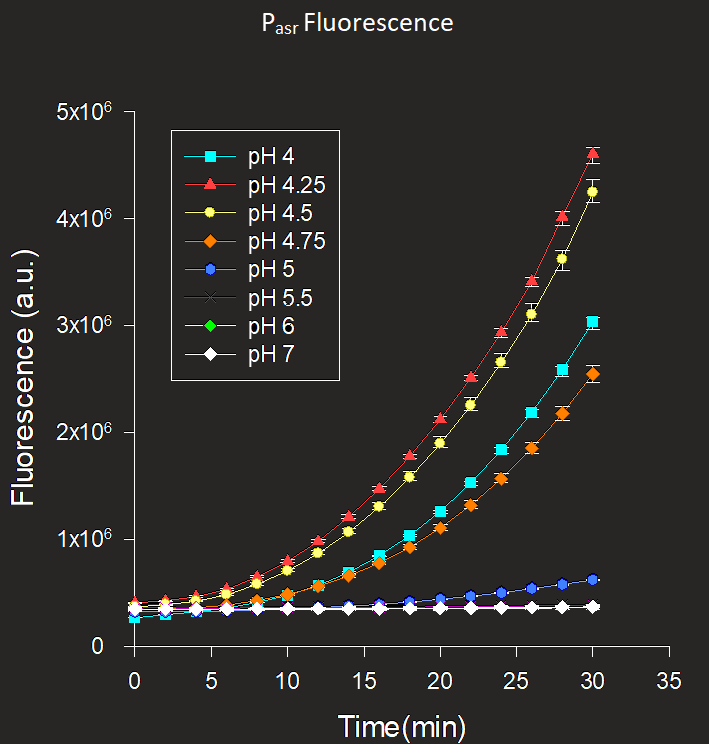 Based on the data has shown above, we could conclude that Pasr is an acidic promoter as it has a high expression of fluorescence at pH 4.25 and pH 5. The results show that Pasr constructed pH sensing system can be used as an alert. When the medium turns acidic, fluorescence can be easily observed. We believe that this system can also be applied to various bio-detection system.

PgadA (BBa_K1962013) was previously reported to be induced under neutral and mild acidic environment. We measured the fluorescence intensity for 14 hours. We pre-cultured the strain and incubate the strain with pH modified M9 medium (the pH value is modified with 1M HCl). The induction of PgadA is observed under neutral and weak acidic environment. 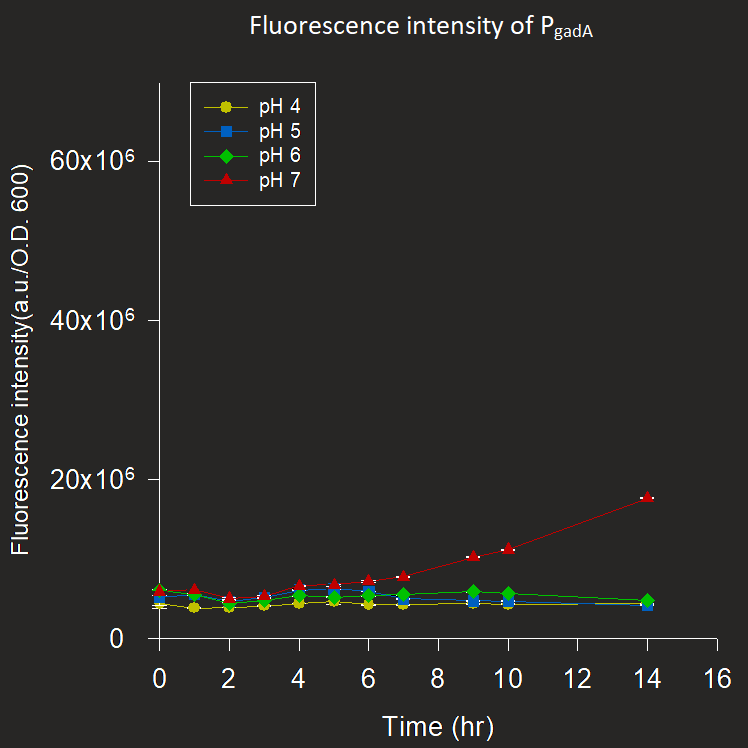 We found out that the fluorescence intensity of PgadA is much lower than the Pasr and would like to improve the sensitivity of this biobrick. We thus add a RiboJ sequence at the downstream of PgadA. RiboJ sequence is reported to increase the expression of downstream protein. We thus compare the fluorescence of previous and improved biobrick. We discover that with RiboJ, the protein of down-stream reporter protein is increased. 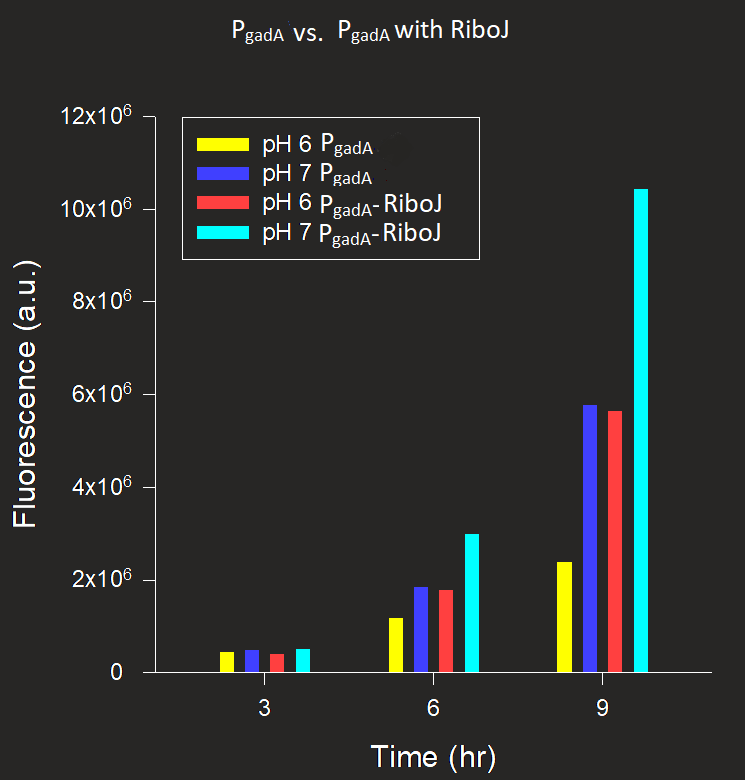