A Novel Approach to Measure

In the total solution experiment, we strive to measure the carbon fixation amount of each sample. After reading numerous publications, we found out that previous researches determine the efficiency of carbon fixation via measuring the decrease of carbon dioxide concentration in the closed system or measure the weight percentage of 14C radioisotope in the dry cell. However, due to biosafety constrain of our lab, we can barely use the radioisotope. Measuring the decrease of carbon dioxide concentration in the closed system is also impractical for us since we have too much test samples. A new method to measure multiple samples in the short period of time is developed by our team. We are able to evaluate the fixation efficiency of each sample with optical density O.D. 600 and xylose consumption. We have measure various construction to prove that the enzyme of our construction is necessary for carbon fixation.

The test samples below were incubated in a modified M9 medium which substitutes xylose for glucose. 1/1000 of Luria-Bertani (LB) medium was added to support trace elements. Since the concentration of LB medium is too low, it doesn’t contribute to the carbon source of the bacteria. 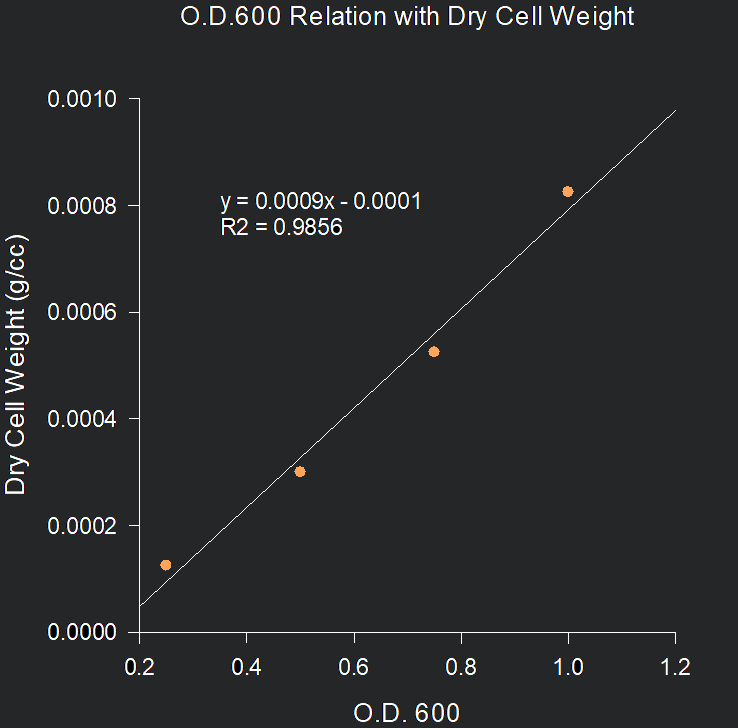 Combining these two assumptions, we can conclude that in a fixed O.D. 600 value, the composite weight of carbon is also fixed. Thus, O.D. 600 can be considered equivalent to carbon weight of the bacteria.

After these two assumptions, the XUI is designed to evaluate the carbon fixation ability of each strain. The definition of the index is xylose consumption over O.D. 600. O.D. 600 measurement can be viewed as the weight of carbon of the bacteria. The index shows the ratio of xylose consumption per biomass. For wild type E. coli, it only consumes xylose (the sole carbon source provided by the medium) as its carbon source. Although some native E. coli pathway may utilize CO2 (such as lipid synthesis), the amount is too small to be considered. As for engineered strain, carbon dioxide can be utilized as its carbon source. By producing same amount of carbon biomass, it requires less xylose. We can thus compare the XUI of each strain to determine the strain that fix carbon. The less the XUI in the sample, the more possibility that it fix carbon.

We use the XUI to compare the carbon fixation efficiency of each strain and prove the function of each system. For the experiment result, please view the Result(hyperlink) page.