Alternative Roots participated in the 2018 InterLab study. Three calibration steps were carried out prior to any experimental measurements being taken. Absorbance and fluorescence values were measured in 96-well plates using a Thermofisher Varioskan Lux plate reader (Thermofisher Scientific). Absorbance was measured at 600 nm and converted to a comparable OD600. Fluorescence was measured at 525 nm with excitation at 485 nm with a 12 nm bandpass width. All readings took place at 25 °C and pathlength correction was disabled. The calibrations were:

1. A LUDOX CL-X 45 % colloidal silica suspension was used to calculate a conversion factor for the Abs600 value measured by the plate reader to a comparable OD600 value, considering path length and well volume (Table 1). Abs600 of 1:2 dilutions of LUDOX silica suspension were taken in triplicate and a reference OD600 of 0.063 (the reference value for 100 µL of LUDOX CL-X in a well of a standard 96-well flat-bottom black with clear bottom plate) divided by the mean measured value to give a conversion factor. 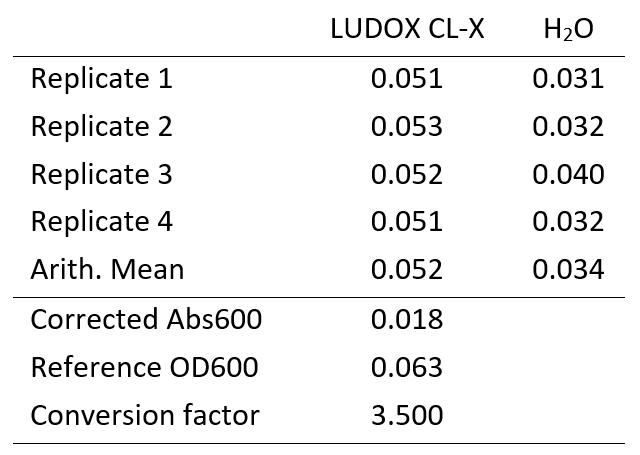 2. A standard curve was prepared by measuring the OD600 of serial dilutions of monodisperse silica microspheres, with similar light scattering properties to E. coli cells. This was used to standardise OD readings across labs (Figure 1A).

Following these calibration steps, two transformed colonies for each test device and both control plasmids were used to inoculate lysogeny broth (LB) medium containing 25 µg/L of chloramphenicol (CAM) and incubated overnight at 37 °C with shaking at 220 rpm. Overnight cultures were diluted 1:10 and the OD600 adjusted to 0.02 with LB with CAM to a final volume of 12 mL. Fluorescence and Abs600 were taken at 0h and 6 hours of incubation at 37 °C with 220 rpm shaking. Test devices and plasmid backbone are shown in Figure 2. 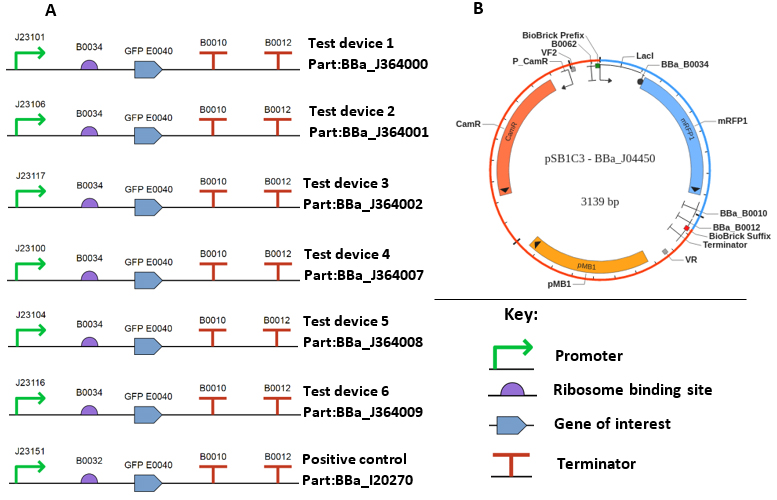 Results for OD600 and fluorescence measurements after 6 hours are shown in Figure 3.

Figure 3. OD600 (A) and fluorescence (B) InterLab study results for positive and negative controls and all test devices after 6 hours. Tests were performed in duplicate using two colonies for each test device, results for which are shown separately to account for colony-to-colony variation.

Results for both 0 and 6 hours were converted into fluorescence per OD600 and fluorescence per cell using the previously described calibrations (Figure 4). While the InterLab study is an opportunity for crowdsourcing a large amount of data on the inherent variability of a given biological system, it does not account for variations within data sets. Our team attempted to seek out and address such sources of variation, investigating biodesign automation of protocols, use of internal standards and effects of media composition. Further detail and results are available on the measurements page. 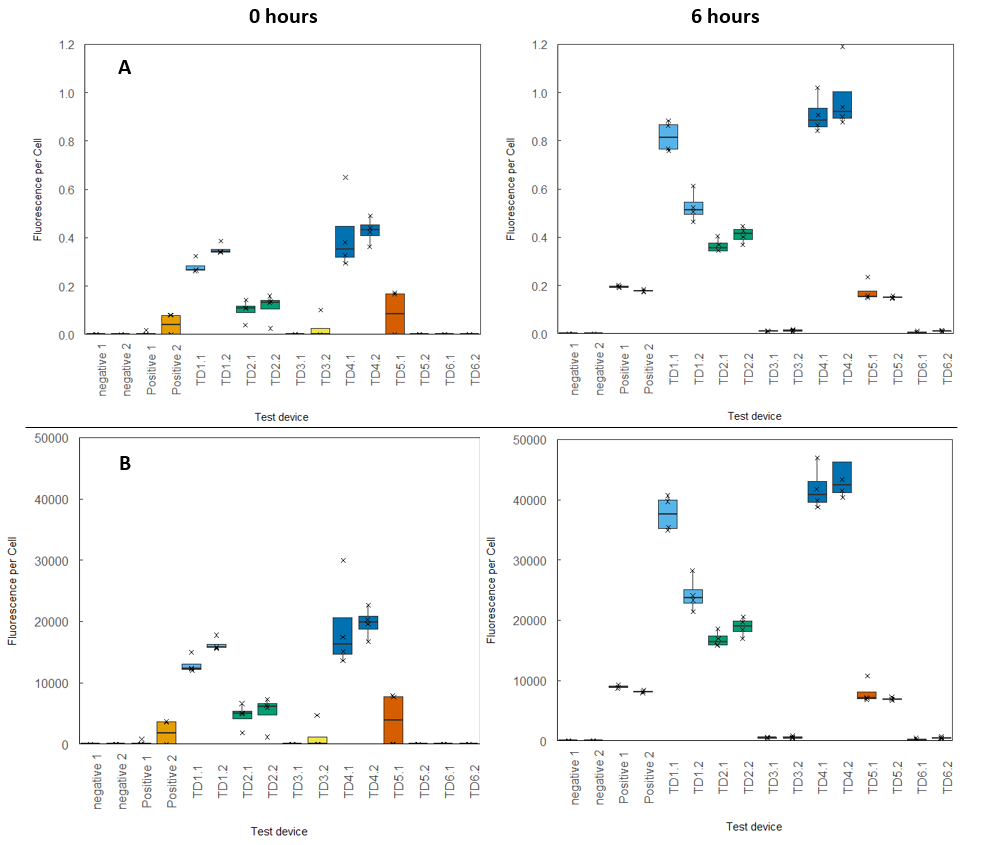 Figure 4. iGEM InterLab study results for positive and negative controls and all test devices. Fluorescence was measured at 525 nm and readings were taken at 0 hours and 6 hours in a 96 well plate. A: Fluorescence per OD600, B: Fluorescence per Escherichia coli cell, calibrated to a standard curve of LUDOX silica beads.