NEON system is designed to receive input, amplify through positive feedback then generate output sig-nals, while remaining stringent without stimulation. This is achieved with a double control design that in-volves two interlinked devices, lux positive feedback circuit and CRISPRi. In NEON test system, we built two plasmids, Neon the positive feedback plasmid BBa_K2558214, and Safety Catch the CRISPRi plasmid BBa_2558215, BBa_K2558216 and these two are linked by a Ptac/lacI system.
We named the positive feedback plasmid Neon because it is the core element in NEON system, and without Safety Catch inhibition it causes E.coli to produce massive amount of output sfGFP, shining brilliantly like a neon light. The constitutively expressed luxR on neon is able to bind with lux-AHL. LuxR/AHL complex activates lux pR that controls the expression of luxI and sfGFP. LuxI protein is the en-zyme that catalyses the synthesis of lux-AHL, which is going to bind with more luxR protein and further activates lux pR expression, forming a positive feedback loop. However lux pR promoter is not stringent and even the slightest leakage is able to put the positive feedback loop in action. This is where the safety Catch plasmid comes in. It is designed to prevent undesired leakage expression, like the safety catch on a firearm, keeping Neon in check. Constitutively expressed dCas9 and Ptac controlled gRNA binds just downstream on the lux pR promoters on Neon. The binding interrupts the formation of bacterial initiation complex, silences luxI and sfGFP expression and prevents positive feedback circuit from activation. With lux-AHL stimulation, luxR/AHL complex activates the transcription of lacI on Safety Catch, which binds to Ptac before gRNA and down regulates gRNA transcription. Without gRNA, dCas9 will no longer interfere with lux pR promoters on Neon, and the positive feedback circuit is able to operate without hinder. However, IPTG can relieve lacI inhibition on gRNA by altering lacI conformation, thus silencing the positive feedback circuit on addition.
The expression range of NEON system is considerably wider than non-positive feedback devices. Compared to other artificial positive feedback devices, NEON is more stable and stringent. By tuning pro-motor and RBS intensities it can be customized to have different stimulation thresholds and reaction inten-sity. NEON could be easily integrated to other projects that share the mutual quorum sensing device. And because lux pR is listed as one of the Top 10 Most Used promoters, we believe NEON could help numerous iGEM projects. 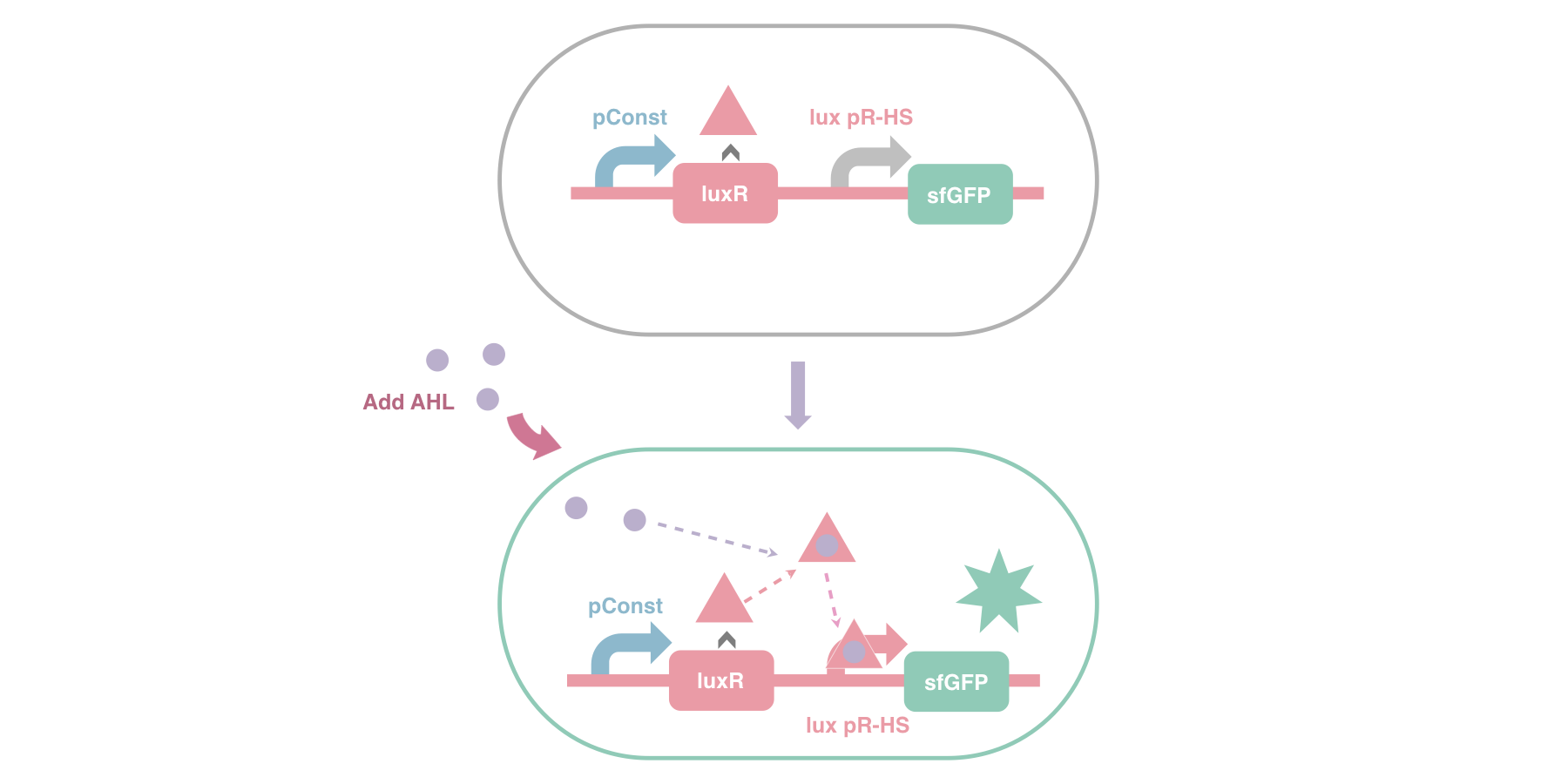 NEON as a complex double control system is quite delicate. With our model we have identified several key parameters that when changed are going to significantly alter the circuit’s behavior, one of which is lux pR. As lux pR controls the expression of luxI and sfGFP on Neon, and lacI on Safety Catch, it is the mutual component in both the positive feedback and CRISPRi systems. With simulations we learnt that increased lux pR transcription efficiency would increase NEON’s reaction to AHL, and decreased lux pR leak-age is going to improve NEON’s performance in conditions with lower concentration of AHL stimulation. Therefore we sought to use point mutations to improve the current lux pR and design a new promoter with higher expression intensity and lower leakage.
With the hope to find an optimal promoter for our NEON system, we designed 9 mutations on sites -35, -36, -37 near the luxR binding site and tested another on -10 site that TUST 2017 reported to show decreased leakage. We conducted experiments to evaluate these lux pR mutants’ reaction to AHL stimulation and their leakage level. The test devices we designed include a constantly expressed luxR and a lux pR (or mutant) driven sfGFP (like BBa_K2558211 with original lux pR promoter, and a BBa_K2558212 with lux pR-HS promoter)We selected one mutation from the luxR binding site, combined it with the mutations on -10 region and generated a promoteor we believed to be hypersen-sitive. We named it lux pR-HS (BBa_K2558001). 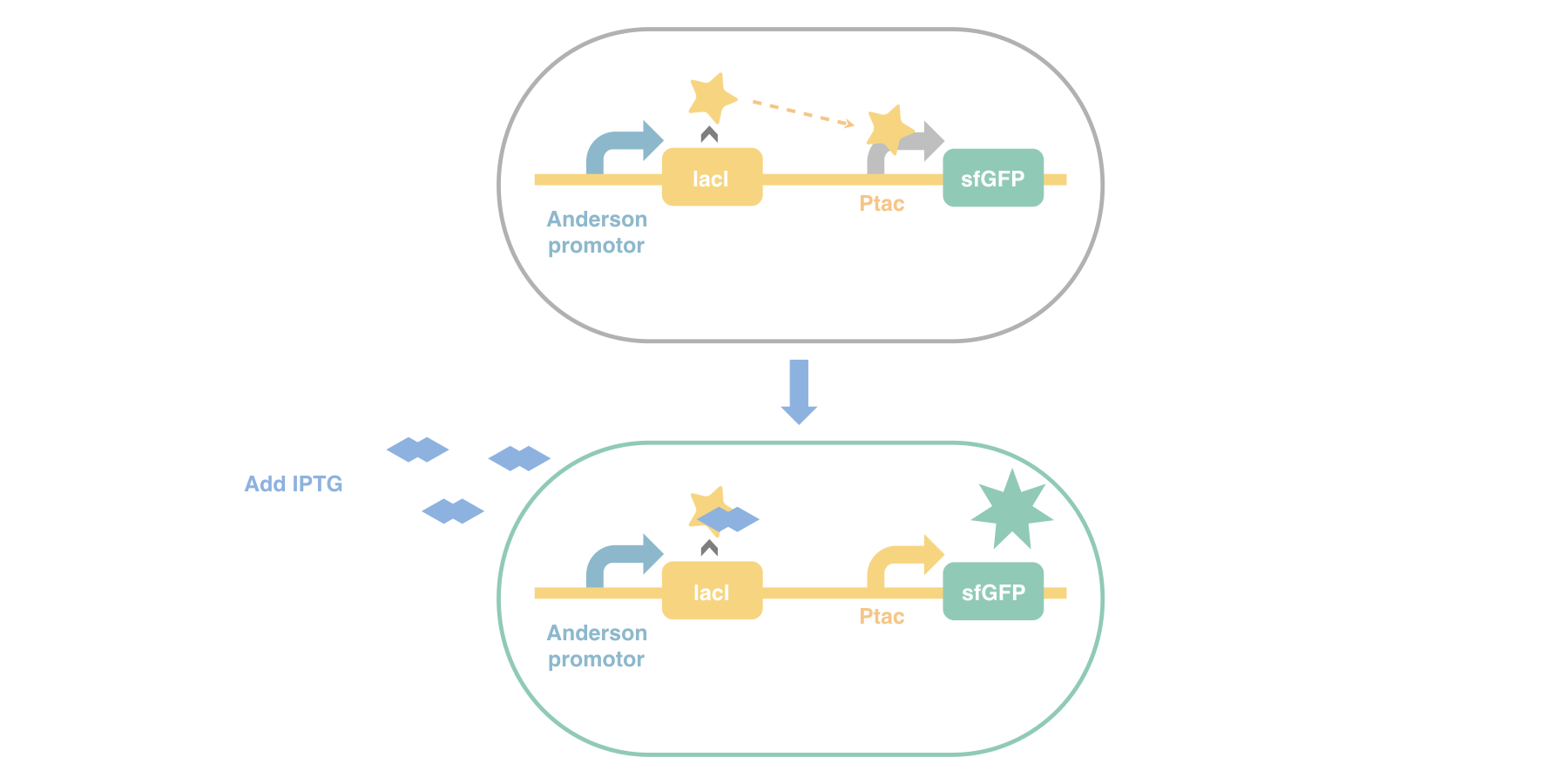 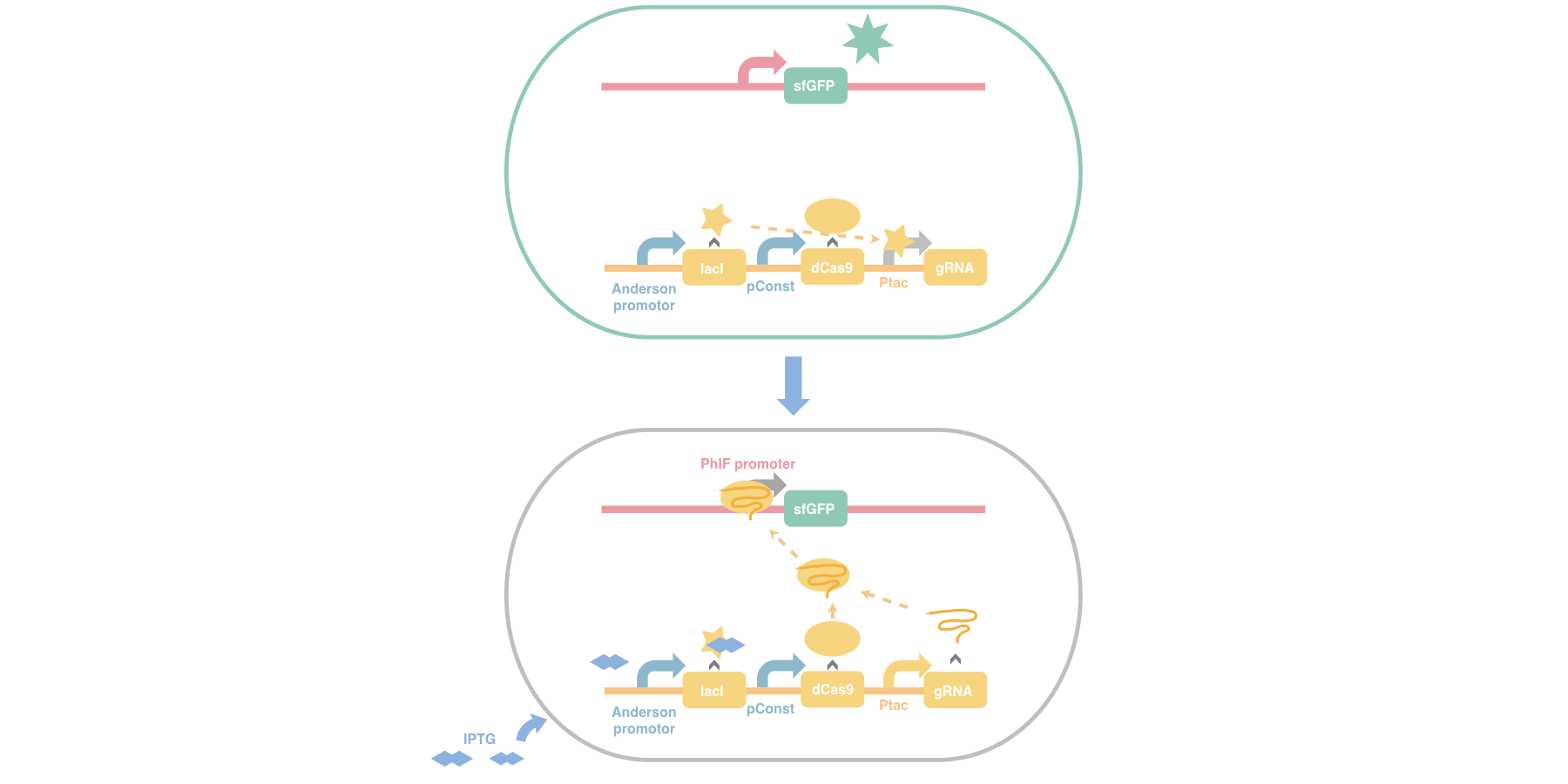 After we clarified the correlation between lacI dosage and its induction efficiency, we furthered the exper-iments by adding CRISPRi to the system. Instead of sfGFP, the three IPTG induction devices with three lev-els of lacI generators are now going to produce a gRNA that targets the promoter of a constitutive sfGFP generator BBa_K2558206,BBa_K2558207,BBa_K2558208. By adding IPTG, we can induce the transcription of gRNA. Binding with constantly expressed dCas9, gRNA is going to inhibit the expression of sfGFP. We were able to observe how this process proceeded un-der different levels of lacI expression.