As a contribution of iGEM UI 2018 team to improve existing parts in iGEM Registry, we decided to assemble “Improved Blue Fluorescent Protein (BFP)” (BBa_K2607002, Figure 1) as improvement of B0034-BFP (BBa_K592024). Our established part consists of these following additional features:

Figure 1. Original designed “Improved BFP” (BBa_K2607002) gBlock we ordered from Integrated DNA Technologies, Inc. (IDT) with length of 1151 basepairs (bp). Note that extra 42 bases in the upstream and 41 bases in the downstream are BioBrick prefix and suffix and for polymerase chain reaction (PCR) amplification purpose. The part itself consists of 1068 bp. Range number in red indicates the position of each component in the gBlock. Rbs = ribosome binding site.

This part can be used as reporter when combined with other parts. Because this part has its own promoter, ribosome binding site, and terminator, addition of these components is basically unnecessary. In addition, appropriate restriction enzyme (NdeI or SalI) can also be used to replace the promoter or ribosome binding site with the desired one.

Figure 2 shows the original plan of how we conducted the experiment with our established and existing parts. 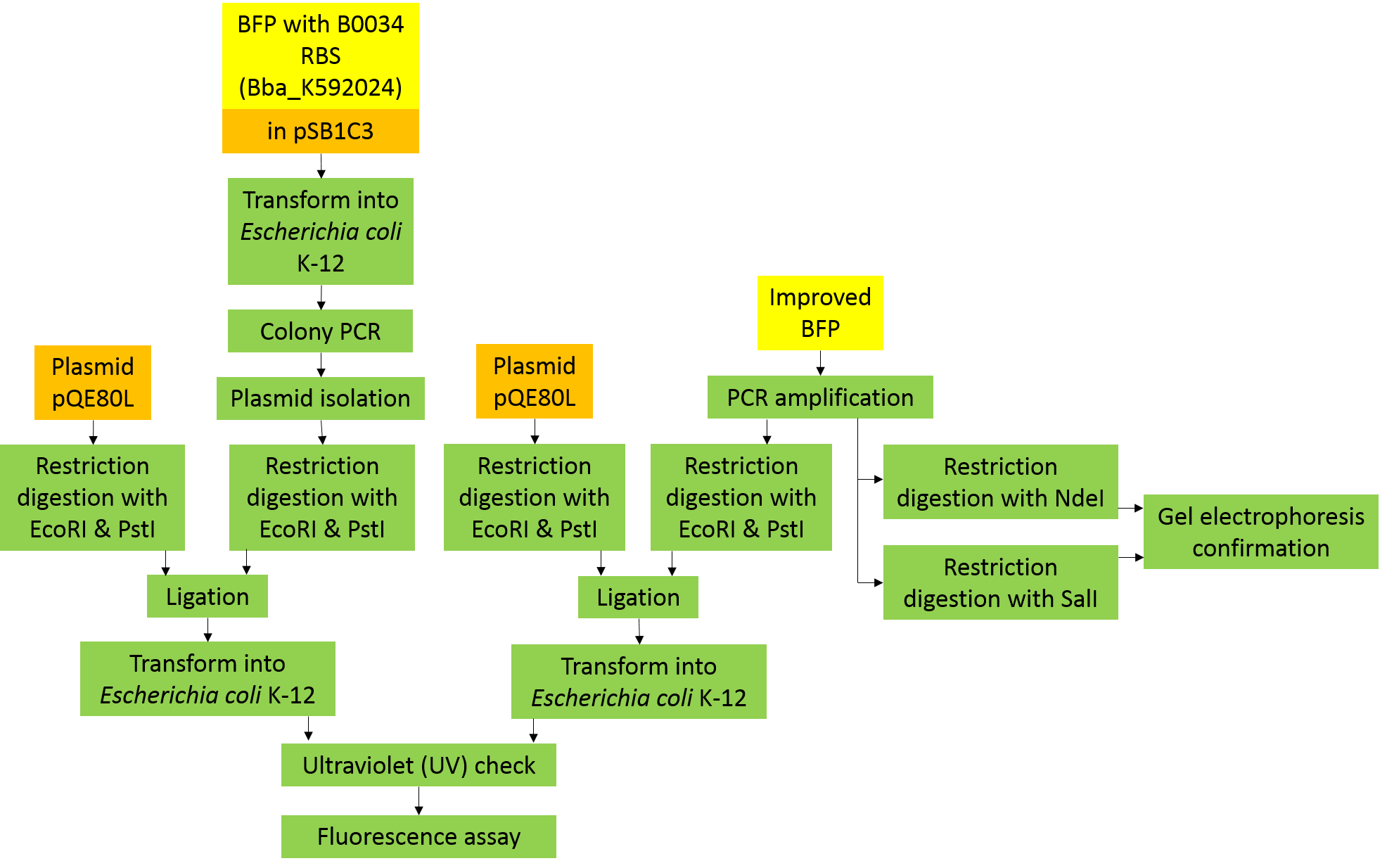 Upon receiving our “Improved BFP” gBlock from IDT, we performed PCR to amplify it until sufficient quantity (about 100 ng/uL). We then created two restriction digestion reactions, one with NdeI restriction enzyme and one with SalI restriction enzyme. Each reaction comprised of 100 uL PCR-amplified “Improved BFP” gBlock, 6 uL restriction enzyme, 15 uL CutSmart® restriction buffer, and 29 uL nuclease-free water. The reaction was subsequently incubated for four hours at 37oC incubator. The digestion products were then run for electrophoresis in 1% agarose gel with tris-acetic acid-EDTA (TAE) buffer 1x, power supply 50 volt for 70 minutes. Visualization was performed with Bio-Rad Gel DocTM XR+ Gel Documentation System.

First, we acquired BBa_K592024 by transforming wild-type Escherichia coli K-12 with plasmid in well 17C of Distribution Kit Plate 1, isolating the plasmid, and performing restriction with EcoRI and PstI restricton enzymes. Our “Improved BFP” and BBa_K592024 were separately cloned into plasmid pQE80L using EcoRI and PstI according to our laboratory protocol. The resultant ligation products were subsequently transformed into wild-type E. coli K-12, along with empty pQE80L as control. Transformation products were spread into Luria-Bertani (LB) agar medium containing ampicillin with ratio 1000:1. On the following day, the fluorescence was assessed qualitatively under ultraviolet (UV) light.

Fluorescence assay was conducted according to 5th InterLab protocol with some modifications. From each transformation plates, two colonies were picked and let to be grown in LB medium with ampicillin (1000:1). Two colonies of E. coli containing empty plasmid pQE80L were also inoculated for control. After 18 hours, each overnight culture was diluted until optical density at 600 nm (OD600) of 0.02 and final volume of 12 mL in 50 mL centrifuge tube covered with foil. At t = 0 hour, 1 mL from each tube was sampled to be measured for its OD600 and fluorescence. The measurement was conducted with GloMax® - Multi Detection System with “UV” settings: 365 nm excitation and 410-460 nm emission. The data obtained were recorded and analyzed in Excel. The rest of dilutions were incubated in shaker under 37oC, 220 rotations per minute (rpm). We repeated the same procedure after t = 6 hour and overnight (t = 14 hour) incubation. 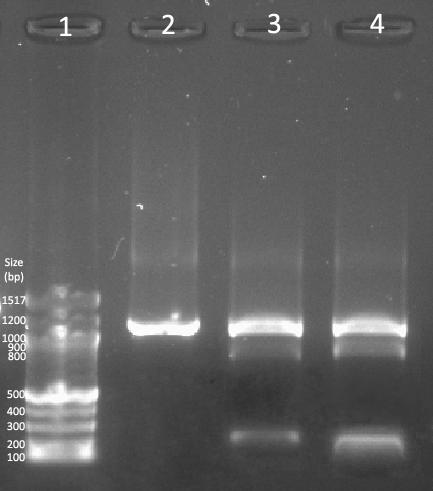 Restriction result of PCR-amplified “Improved BFP” gBlock is shown in Figure 3. At lane 2 consisting of uncut “Improved BFP” gBlock (size 1151 bp), only single band is observed. The band is located between 1000-1200 bp marker at lane 1, which is consistent to the gBlock original size. Upon restriction with NdeI, the expected bands are 271 bp and 880 bp in size, while restriction with SalI will yield expected bands of 249 bp and 902 bp. At lane 3 and 4, there are three bands observed, indicating that the gBlocks were partially digested with respective enzymes, NdeI and SalI. The heaviest bands in lane 3 and 4 were parallel with the band in lane 2, indicating that the bands were uncut "Improved BFP" gBlocks. The middle bands in lane 3 and 4 were similar in size (around 900 bp in size), representing the larger fragments of digestion products with their respective enzymes. The lightest bands in lane 3 and 4 were also similar in size, located between 200-300 bp marker at lane 1. They represent the smaller fragments of digestion products. The smaller fragment upon NdeI digestion is 271 bp, while upon SalI digestion is 249 bp. The lightest band in lane 3 migrated slightly slower than lightest band in lane 4, denoting larger size of smaller fragment in lane 3 than lane 4, which is consistent to the expected restriction results. 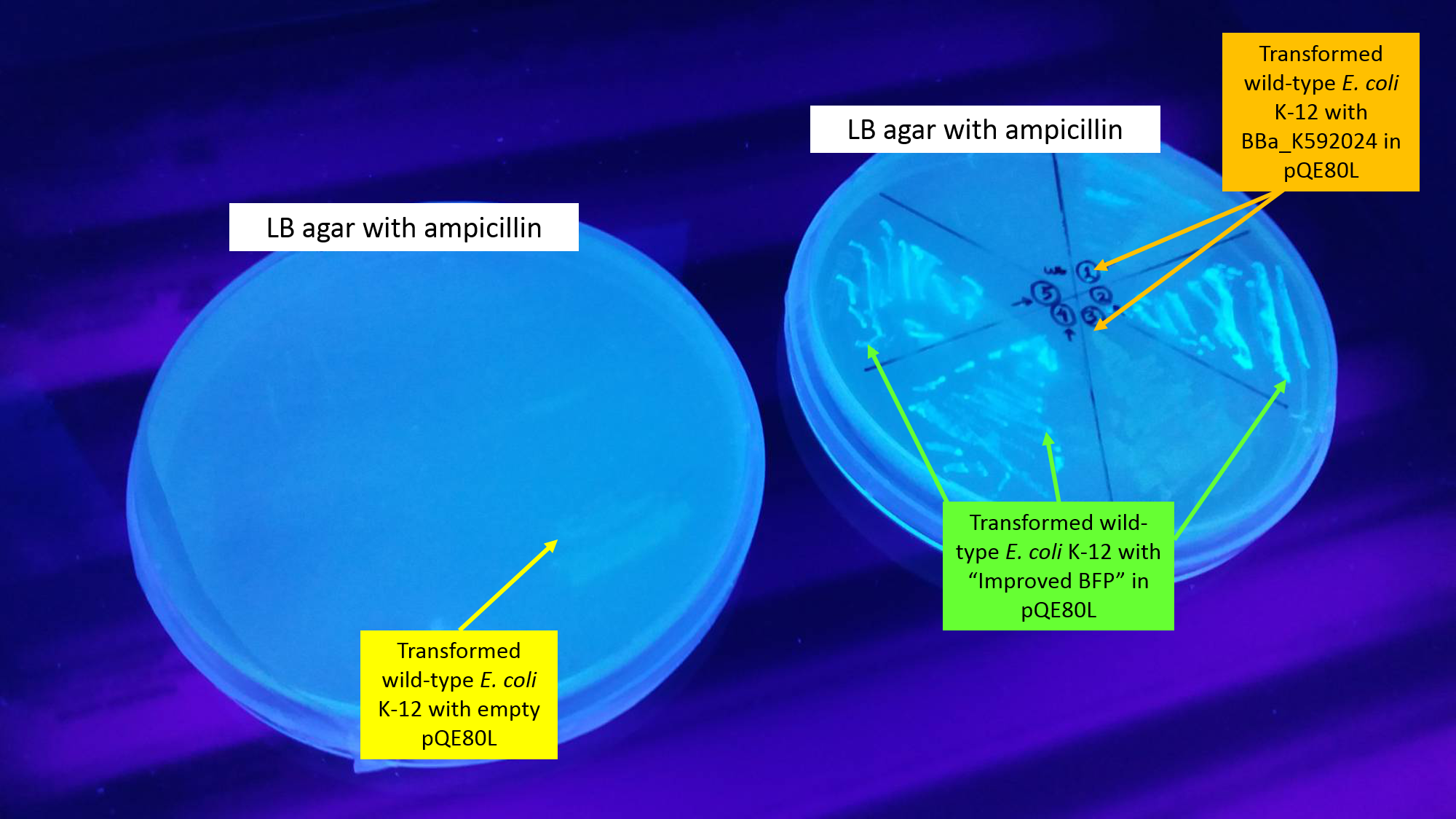 Transformation results of wild-type E. coli K-12 with empty pQE80L, pQE80L with “Improved BFP”, and pQE80L with BBa_K592024 under ultraviolet (UV) light is shown in Figure 4. Qualitatively, higher fluorescence was observed in transformed E. coli with “Improved BFP” compared with others. The probable explanation is that our “Improved BFP” has its own promoter. When our part is cloned into pQE80L with EcoRI and PstI, there are two promoters in the upstream of BFP coding region, theoretically leading to more BFP mRNA and protein being produced. However, to further investigate this hypothesis, we performed quantitative BFP fluorescence measurement from three samples (E. coli K-12 with empty pQE80L, pQE80L + “Improved BFP", and pQE80L + BBa_K592024), as will be explained in Part III. 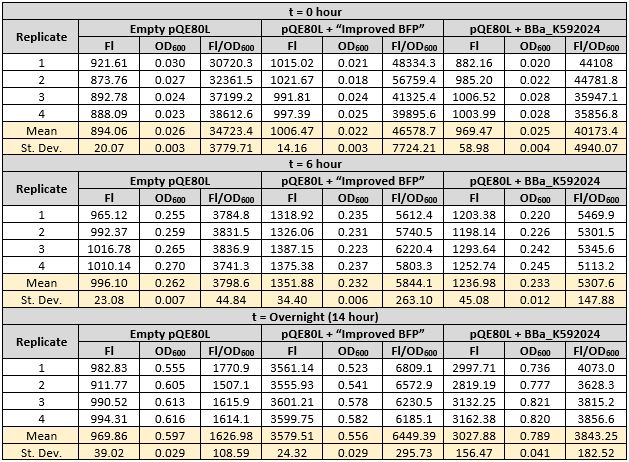 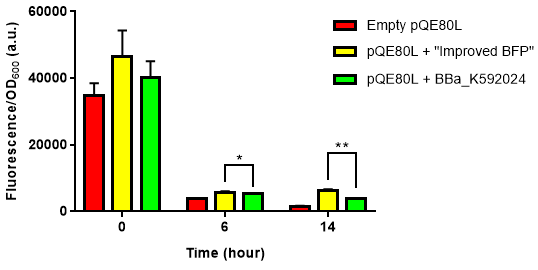