In the field of engineering, repeatable and reproducible measurements are important to obtain valid and reliable results. For past several years, iGEM Measurement Committee has been working on this issue by encouraging registered iGEM 2018 teams to participate in annual InterLab study. InterLab study is mainly focused on fluorescence measurements as one of widely utilized protocols in synthetic biology studies.
Therefore, in this year’s InterLab study, participating 2018 iGEM teams are encouraged to help iGEM Measurement Committee in investigating whether more direct method in expressing total cell number for fluorescence calculation, such as absolute cell count or colony-forming units (CFUs), are better than OD to reduce variability in bulk measurement. We proudly announce our participation in 5th InterLab study for the first time ever, in the hope that our results may contribute to the improvements in synthetic biology. Our members contributing in this InterLab study are shown in Figure 1. 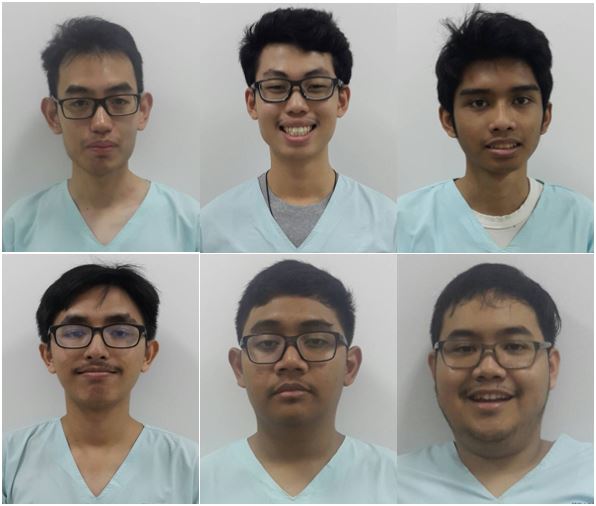 Some of the materials for this study are obtained from 2018 DNA Distribution Kit. Other materials and equipment are provided by Institute of Human Virology and Cancer Biology (IHVCB), UI. 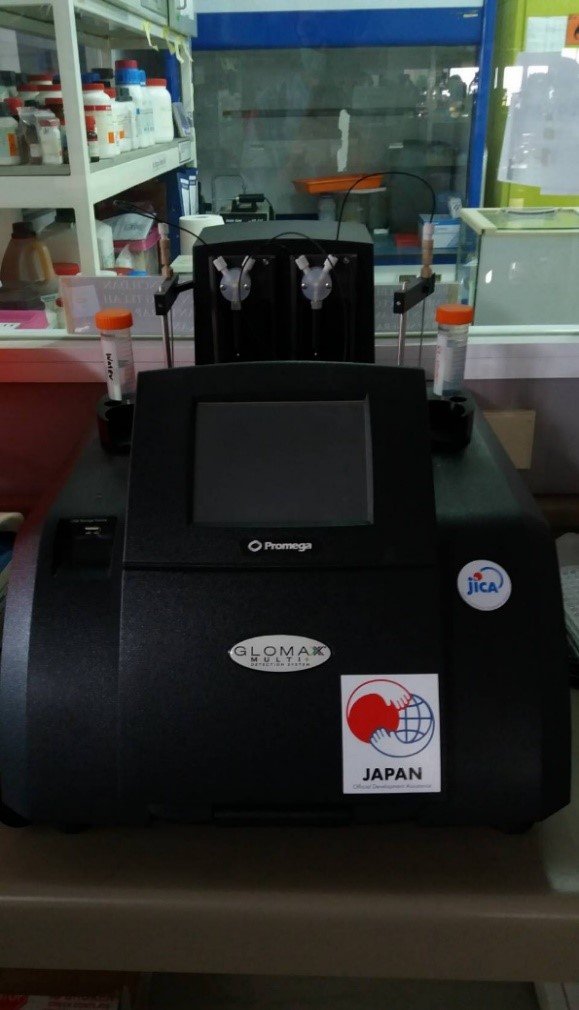 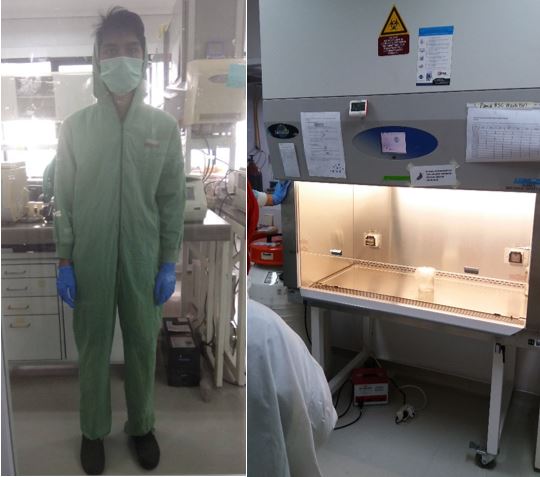 During laboratory works, we took extra precautions to minimize potential harm. We wore personal protective equipment (PPE) such as laboratory safety gowns with head cover, masks, and gloves (Figure 3, left). For procedures that require aseptic technique such as bacterial inoculation, we conducted the experiments in biosafety cabinet (BSC) to prevent contamination (Figure 3, right). We also managed every infectious waste according to our laboratory’s standard operating procedures, such as decontaminating all media used for bacterial growth with 10% sodium hypochlorite overnight before being thrown into appropriate container and autoclaving them (121oC, 20 minutes) along with other infectious wastes. In addition, to ensure validity of our results, we used same instrument settings, 96-well plates, and volumes of sample added to the plates in entire protocol whenever possible.

Before we proceeded to Part II and III of the protocol, we had made three calibrations as follows:

This part of protocol is aimed to measure Abs600 and fluorescence of transformed Escherichia coli strain DH5α with devices provided from 2018 DNA Distribution Kit Plate. All devices are in plasmid pSB1C3, which carries a gene for chloramphenicol resistance. iGEM Registry of Standard Biological Parts (link) provides detailed information about devices being transformed in this study (Figure 6).


The workflow for this part is shown in Figure 7. First, we transformed each device into Escherichia coli strain DH5α according to our laboratory’s protocol (full version please refer to this file) and subsequently plated into different LB agar with chloramphenicol (Cam). After overnight incubation at 37oC, two colonies from each transformation plates were inoculated in 10 mL LB liquid medium + Cam and let to be grown overnight at 37oC and 220 rotations per minute (rpm). On the next day, we diluted 0.5 mL of each culture in 4.5 mL LB + Cam (ratio 1:10) and measured for their respective Abs600, along with Abs600 of LB + Cam (we created two replicates to be measured for each sample). Using obtained Abs600 data, the cultures were further diluted to target Abs600 0.02 in final volume of 12 mL LB + Cam in different 50 mL centrifuge tubes covered with foil. From each centrifuge tube, 500 uL diluted cultures were sampled and measured for Abs600 and fluorescence, while the rest of diluted cultures were incubated at 37oC, 220 rpm until next six hours to be sampled and measured again. Samples for Abs600 and fluorescence measurements were put in 96-well plates (each well contains 100 uL volume) according to layout shown in Figure 8, under same conditions as previous calibration in Part I of the protocol. 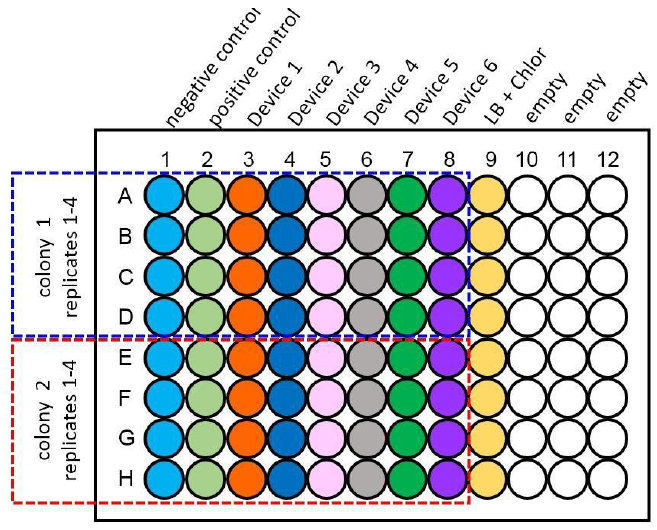 This last part of protocol is aimed to convert OD600 (obtained after transformation of Abs600 from Part II with conversion factor from Part I) into CFUs. The significance of this part is that CFU counts are directly correlated with cell concentration in given volume of culture (i.e. viable cell counts per mL). In this part, we used two colonies from each positive and negative control (four in total). This part consists of three steps as follows: 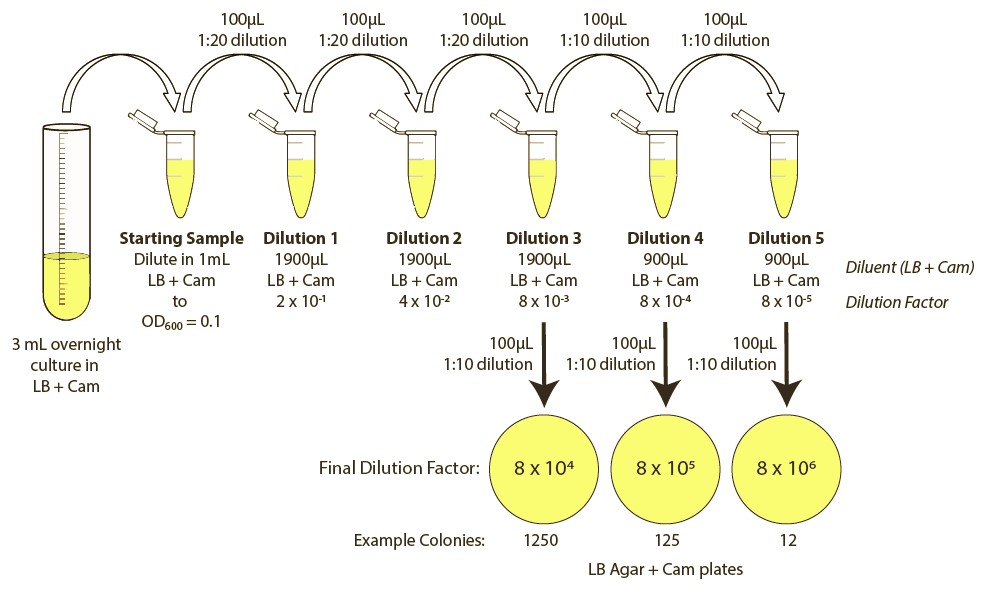 For complete raw data of calibrations (in Part I) and Abs600 and fluorescence measurement (in Part II), please refer to our Excel file attached here. 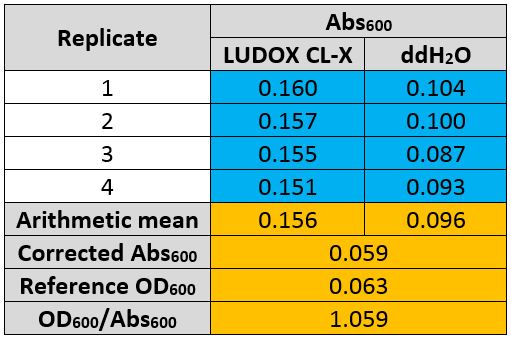 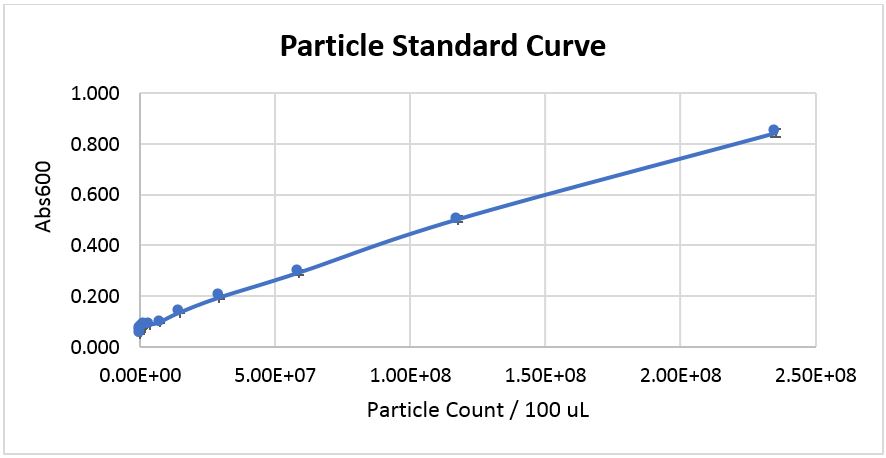 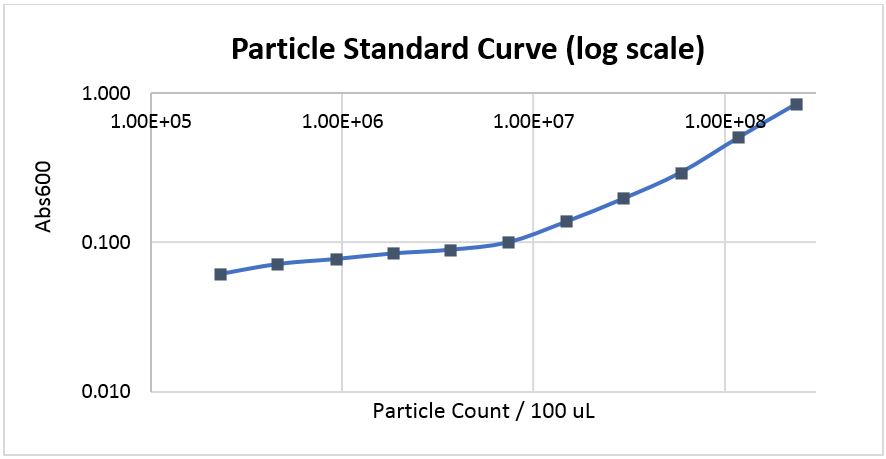 At medium-high concentrations of microspheres (i.e. from 7.35*106 until 1.18*108 particles/100 uL), we found the mean particle concentration after divided by their respective Abs600 was 2.08*108 particles/100 uL sample. We would later use this value to estimate molecules of equivalent fluorescein (MEFL) per particle in Part II (i.e. in this case, the particles were bacterium cells, and microspheres were used as a representation of the cells). We used medium-high concentrations value because they are less likely to be affected by pipetting error or saturation (the same principle applies to fluorescein which will be discussed later). 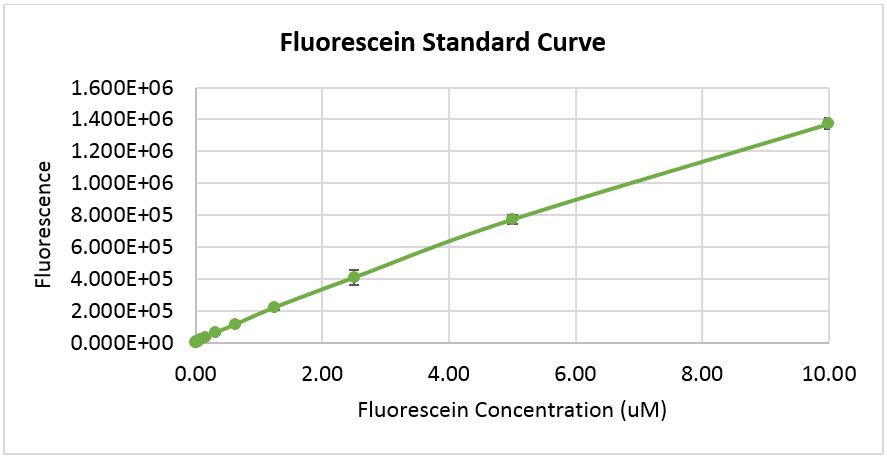 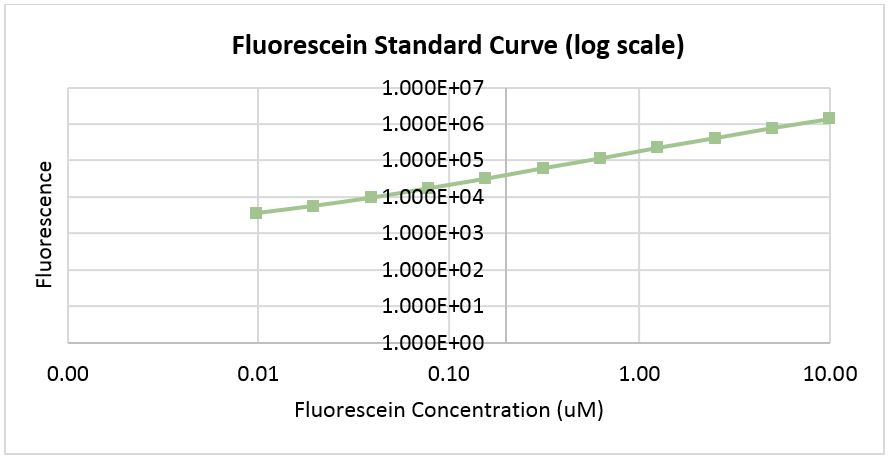 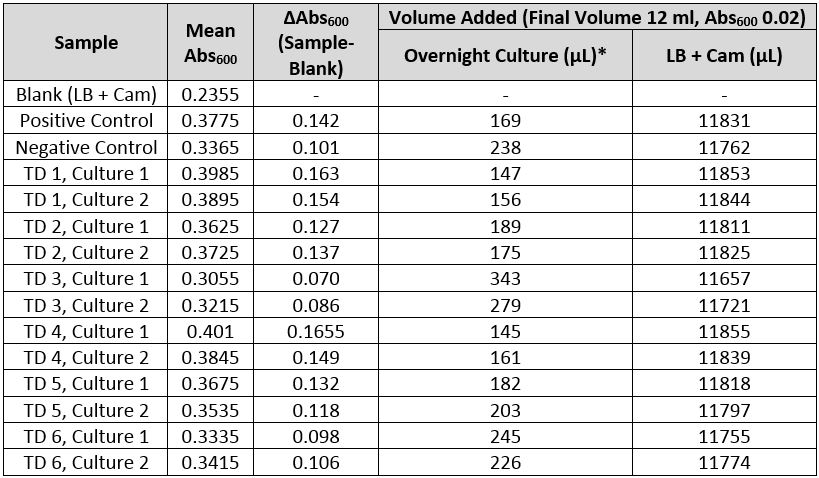 First, we created samples of 1:10 dilution from each transformed device and checked for their respective Abs600 by creating two replicates from each diluted sample. The absorbance result is shown in Table 2, second column. Using the dilution formula, we obtained volume of each initial culture to be added into fresh LB + Cam to target Abs600 approximately 0.02 and final volume of 12 mL (Table 2, fourth and fifth column). To ensure Abs600 of the newly-made dilutions were about 0.02, we performed Abs600 measurement along with their fluorescence at t = 0 hour. The rest of dilutions were then incubated and after 6 hours, their Abs600 and fluorescence were measured again. 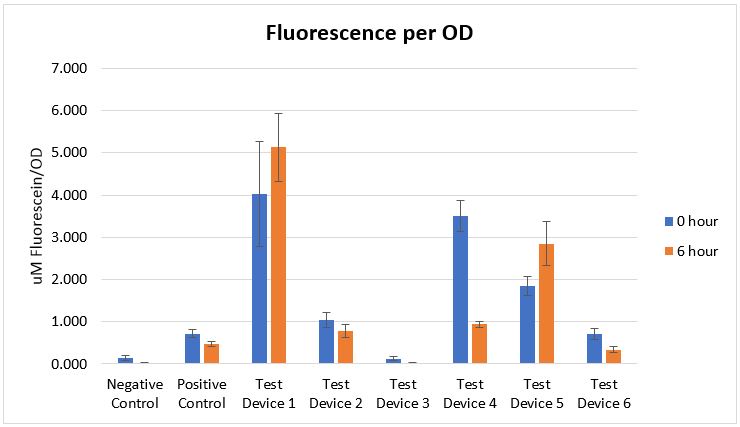 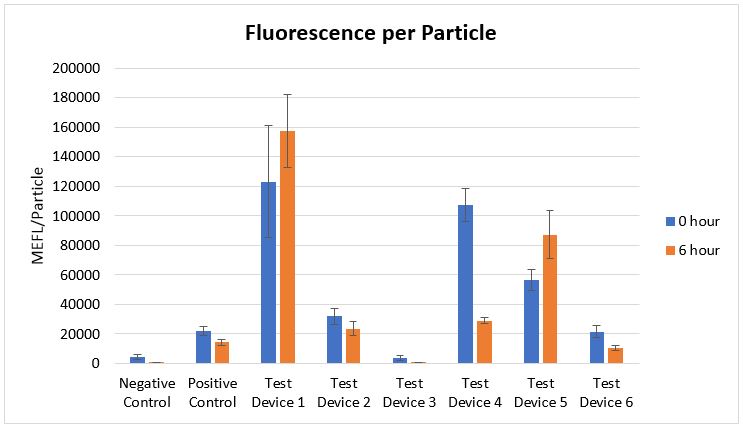 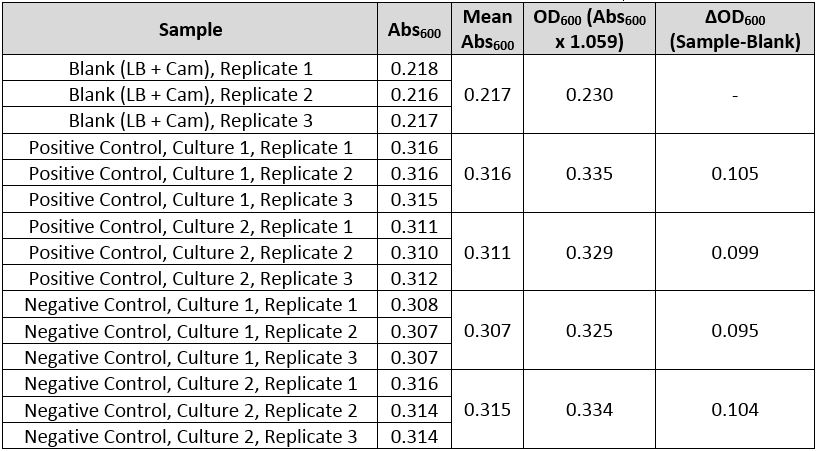 We created 1:8 dilution from two positive control samples and two negative control samples (obtained after overnight incubation in Part II) and measured for their Abs600 (Table 3, second column). Next, we converted Abs600 data into OD600 by multiplying them with 1.059 (i.e. conversion factor obtained from Part I). From this, we calculated for overnight culture volume to be added into fresh LB + Cam to target OD600 0.1 and final volume 1 mL using dilution formula (Table 3, fifth and sixth column). We then checked Abs600 from newly-made dilutions whether their OD600 were around 0.1 after subtracted by blank. The results is shown in Table 4. 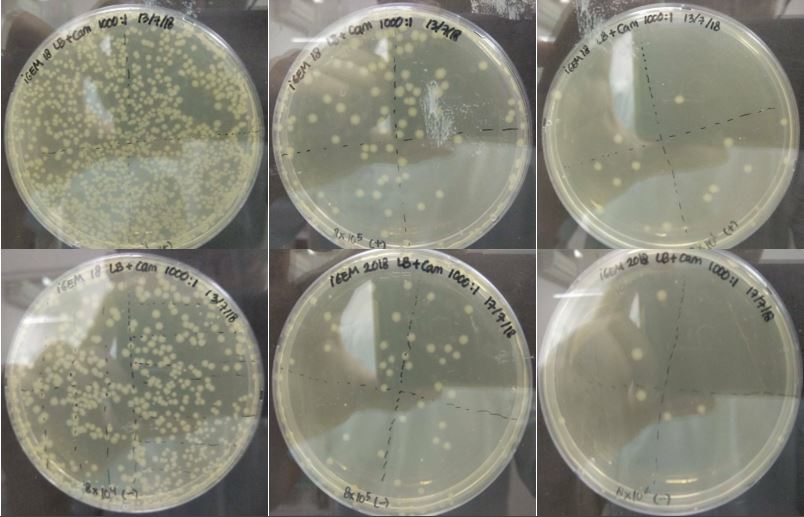 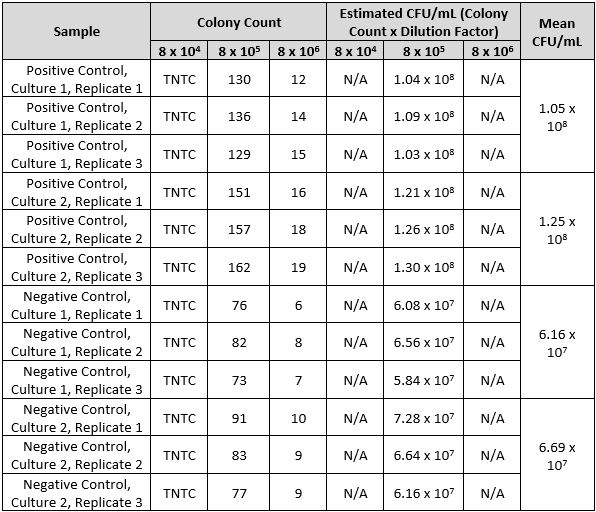