Microfluidic technology deals with the development and application of devices that control fluids on the microliter scale. These devices offer extremely high levels of precision over fluid flow regime, making them useful in biological procedures, like PCR and electroporation. These advantages stem primarily from the large surface area-to-volume ratio inherent in the size of microfluidic systems. The large surface area-to-volume ratio allows fluids to be controlled by pressure differentials and other viscous forces, and not the mass driven forces present in normal scale systems. The other large advantage that microfluidic devices offer is low reagent input, which can maximize the material efficiency of a given protocol (Brinegar, 2017).


The development of microfluidic devices is currently largely focused towards point-of-care diagnostics and organs-on-chip for drug development. However the advantages of a microsystem has applications in many other areas as well.


A perspective that has been proposed is the development of discrete, functionally closed automated manufacture for the scale out of autologous gene therapy. This model describes a functionally-closed machine that can be deployed at the point of care. This model can be referred to as "GMP in-a-box"; The advantages of which is that the device itself needs to be validated for a chosen protocol and not the sites of use, which lowers infrastructure, operational costs, and the cost of regulatory compatibility for existing facilities (Hourd, 2014).


We believe that highly parallelized microfluidic systems may offer a solution. The microfluidic environment offers unparalleled control and input efficiency, however conventional systems do not offer a competitive production rate. However, another advantage of microfluidic systems is that they are relatively simple to parallelize. Processes can be scaled by designing multiple end-to-end channels onto the same substrate, which can also be scaled by having multiple devices operating at the same time.


Our vision for this sub-project was to develop a proof-of-concept for process units that would enable an overall production, to display that microfluidic systems have the potential to be used for the commercial manufacture of gene therapies. Our chosen modules were the Droplet Formation Module (DFM), and the Droplet Electroporation Module (DEM).


Droplet microfluidics is the use of microdroplets in immiscible phases in laminar flow, which offers very convenient way of handling reagents. Our motivation to develop a monodisperse droplet generator had to do with the need to use isogenic eukaryotic cell cultures in autologous gene therapies. The ability to generate and control cells in droplets would easily enable other downstream processes, such as transfection and purification. If patient cells could be encapsulated in droplets, transfected, then isogenic cell cultures could be created and extracted from those droplets. Those isogenic cultures could then be validated downstream and screened for any off-target integration (Marques, 2017).


The design for our DFM implements flow-focusing to generate droplets. Flow-focusing consists of having channels containing the droplet fluid and the continuous fluid converging at a point. There are four of these junctions on our chip, radially positioned in the interest of reducing the difference in flow resistance at any of the given paths. Droplets would then flow towards the center of the chip, and converge at the outlet.


Initially, we planned to use standard wet lithography techniques to manufacture our chips (glass microscope slides). However, early on Dr. Colin Dalton and Dr. Ebenezer Owusu-Ansah, from the Microsystems Hub at the University of Calgary, had offered guidance in refining our chips, and in the fabrication of the final designs. Dr. Owusu-Ansah engraved the channels onto glass microscope slides with a Spectra-Physics Ti:Saphire femto-second laser micromachining system. The first microscope slides we had received had irregularities in channel depth, which would clearly interfere with the production of droplets. After many iterations, designing a new path for the laser, and changing the substrate from a microscope glass slide to borosilicate glass, Dr. Owusu was able to develop channels with the surface profile that would be needed for droplet formation. The channel cross-section is measured to be 100 microns x 100 microns. 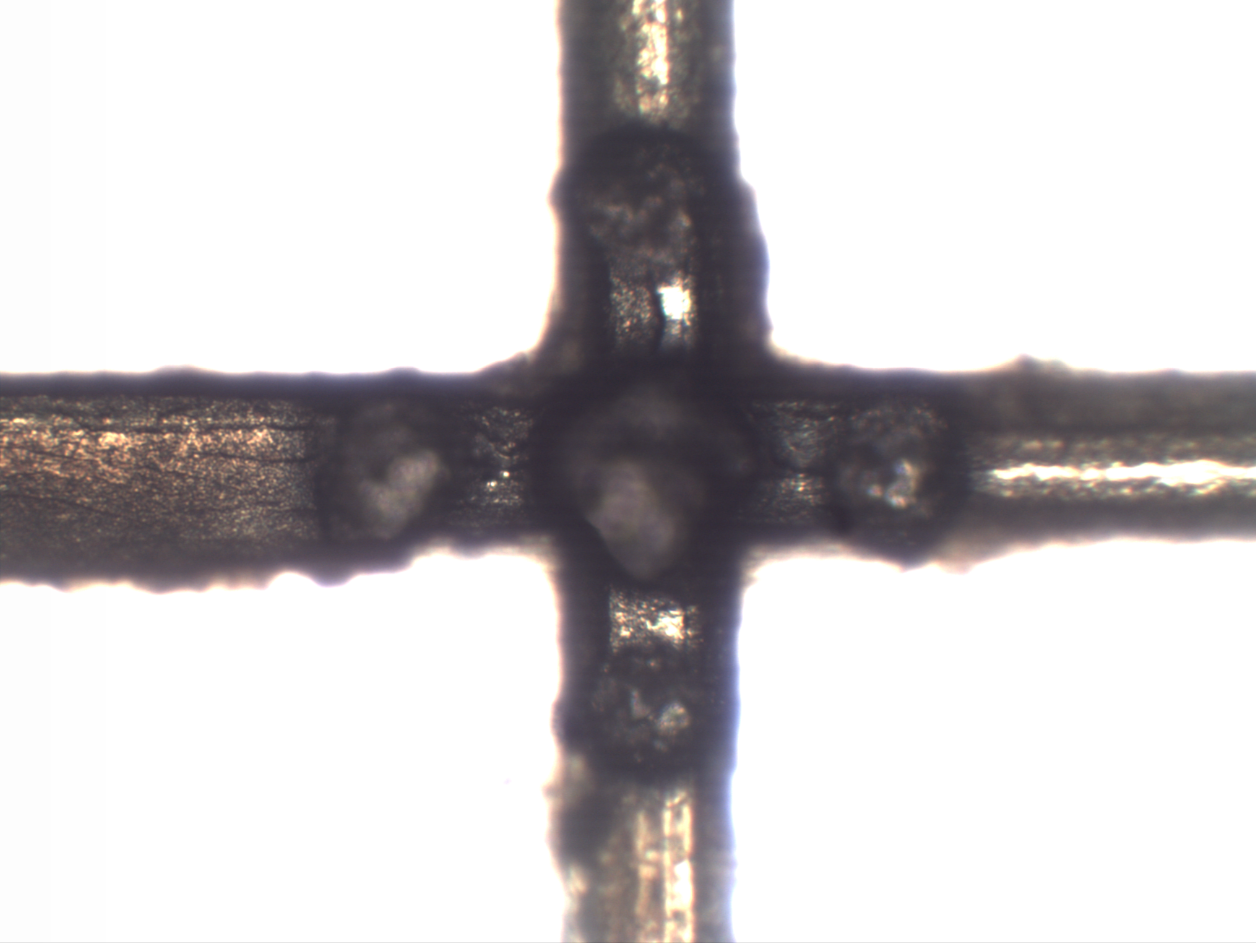 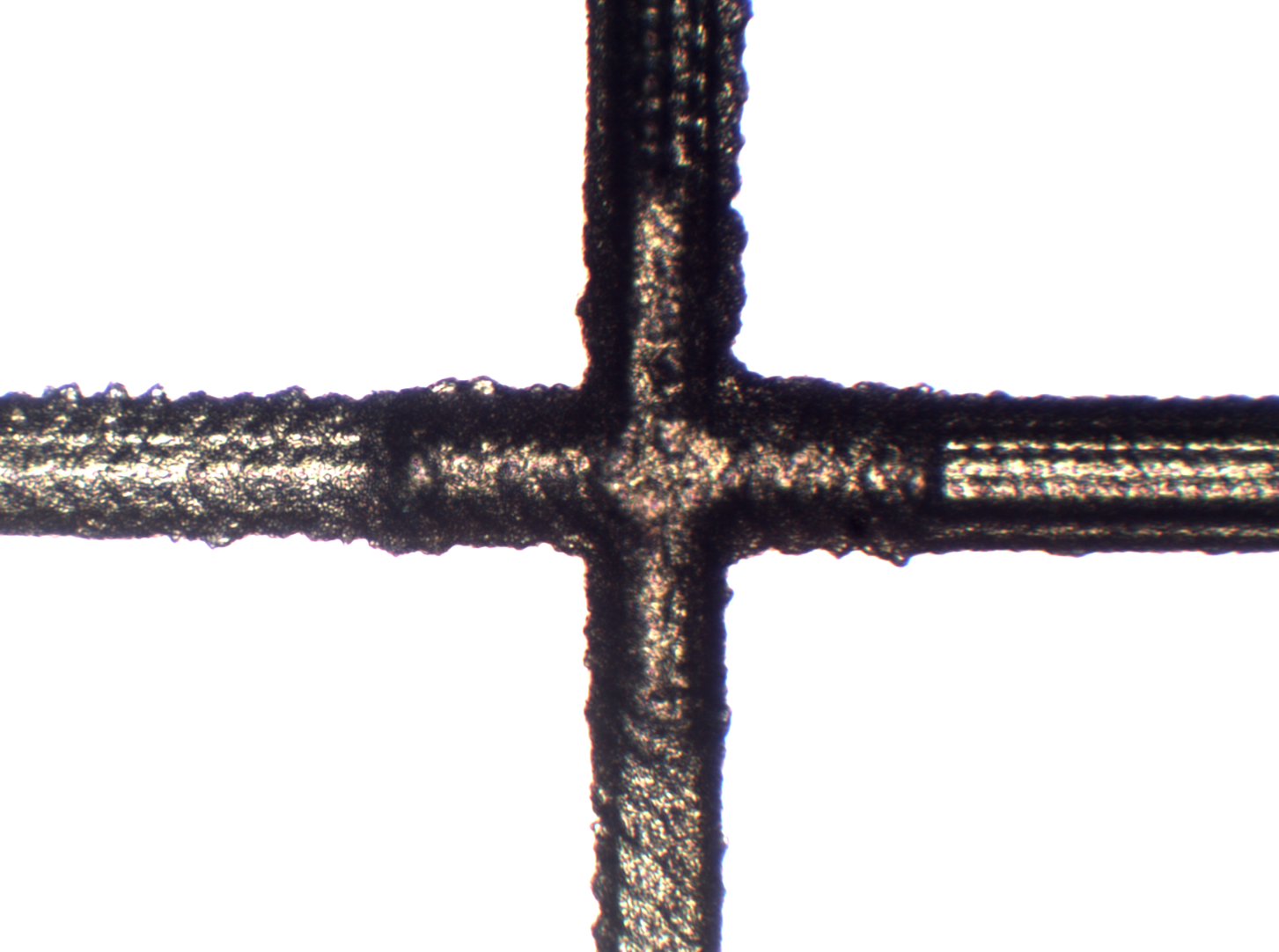 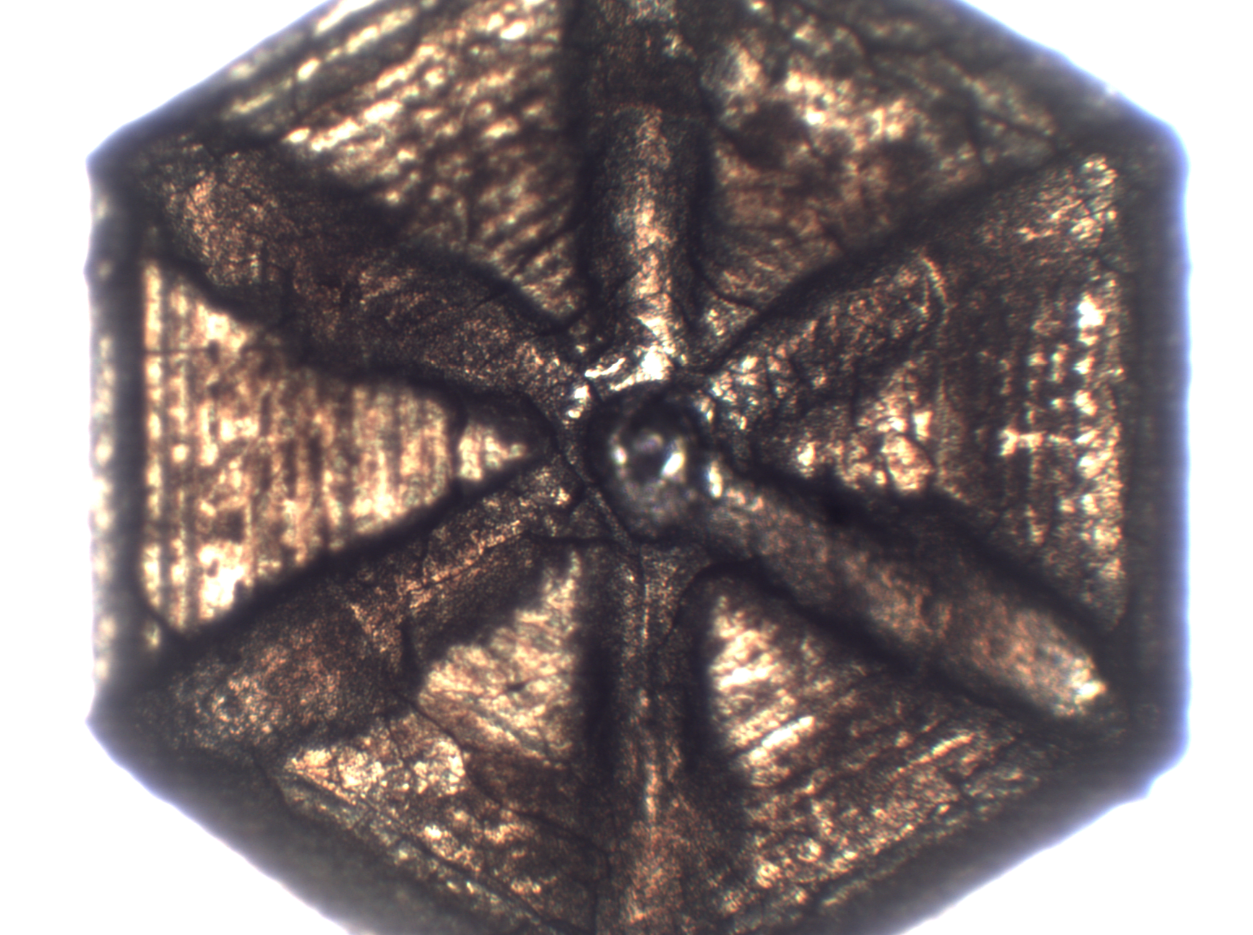 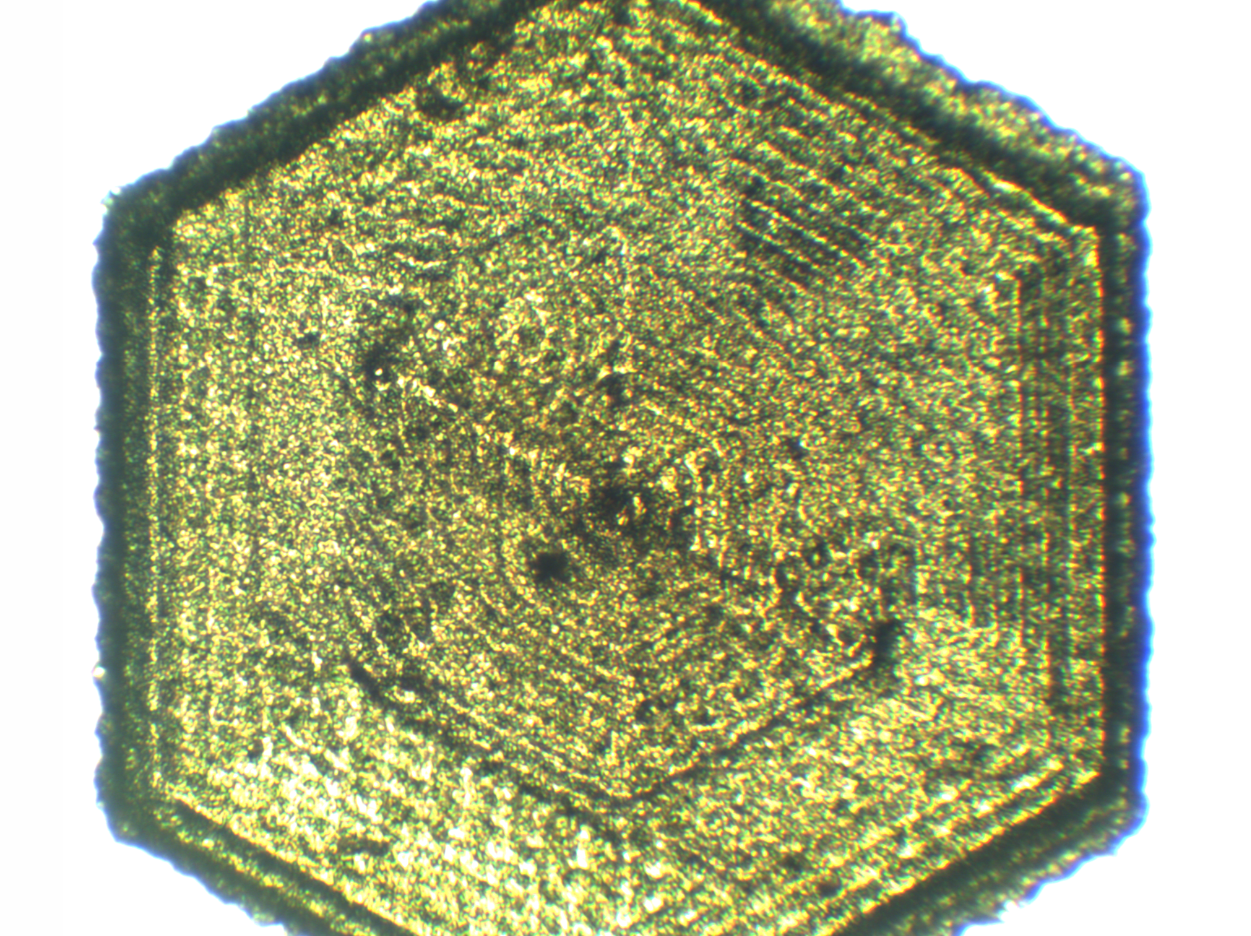 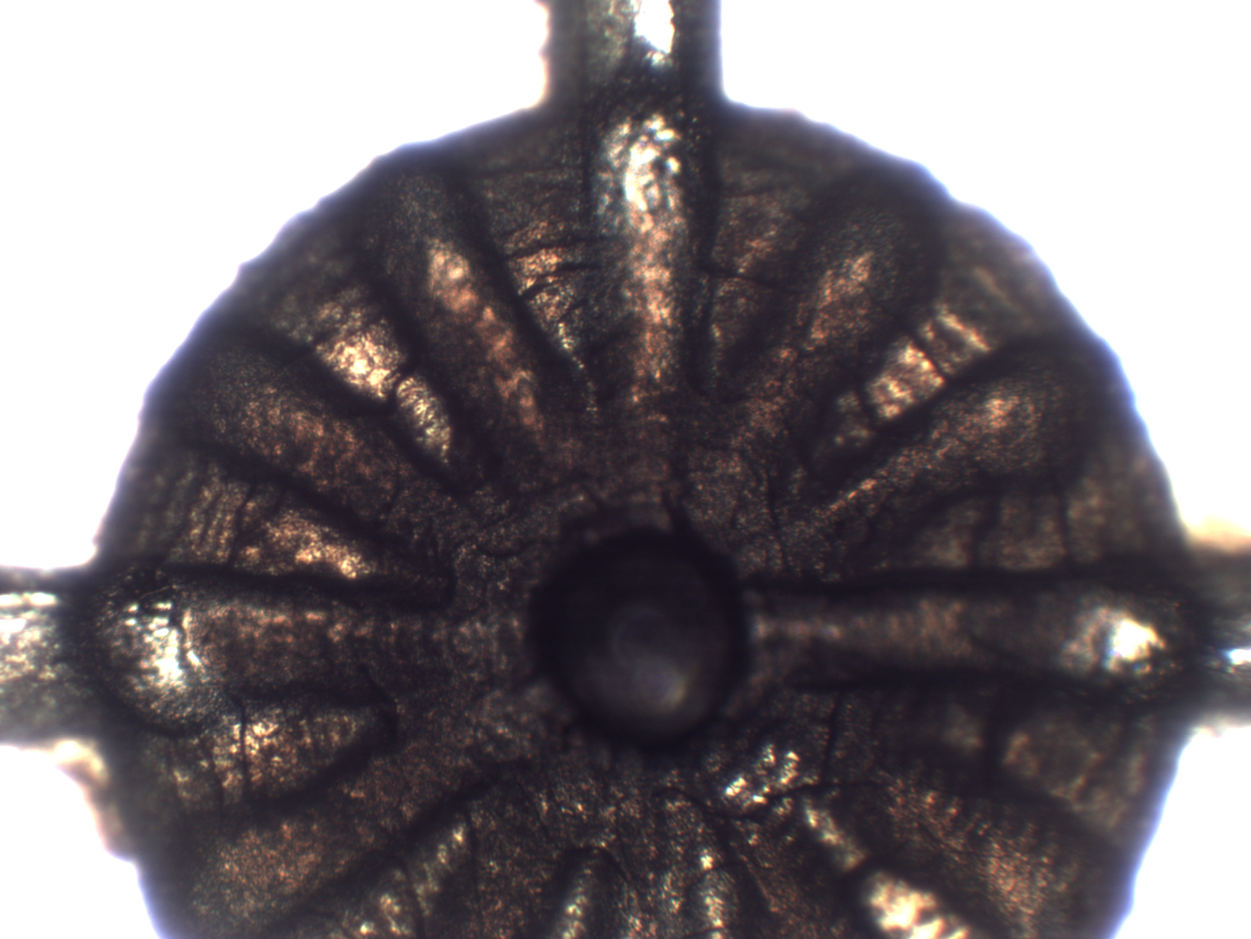 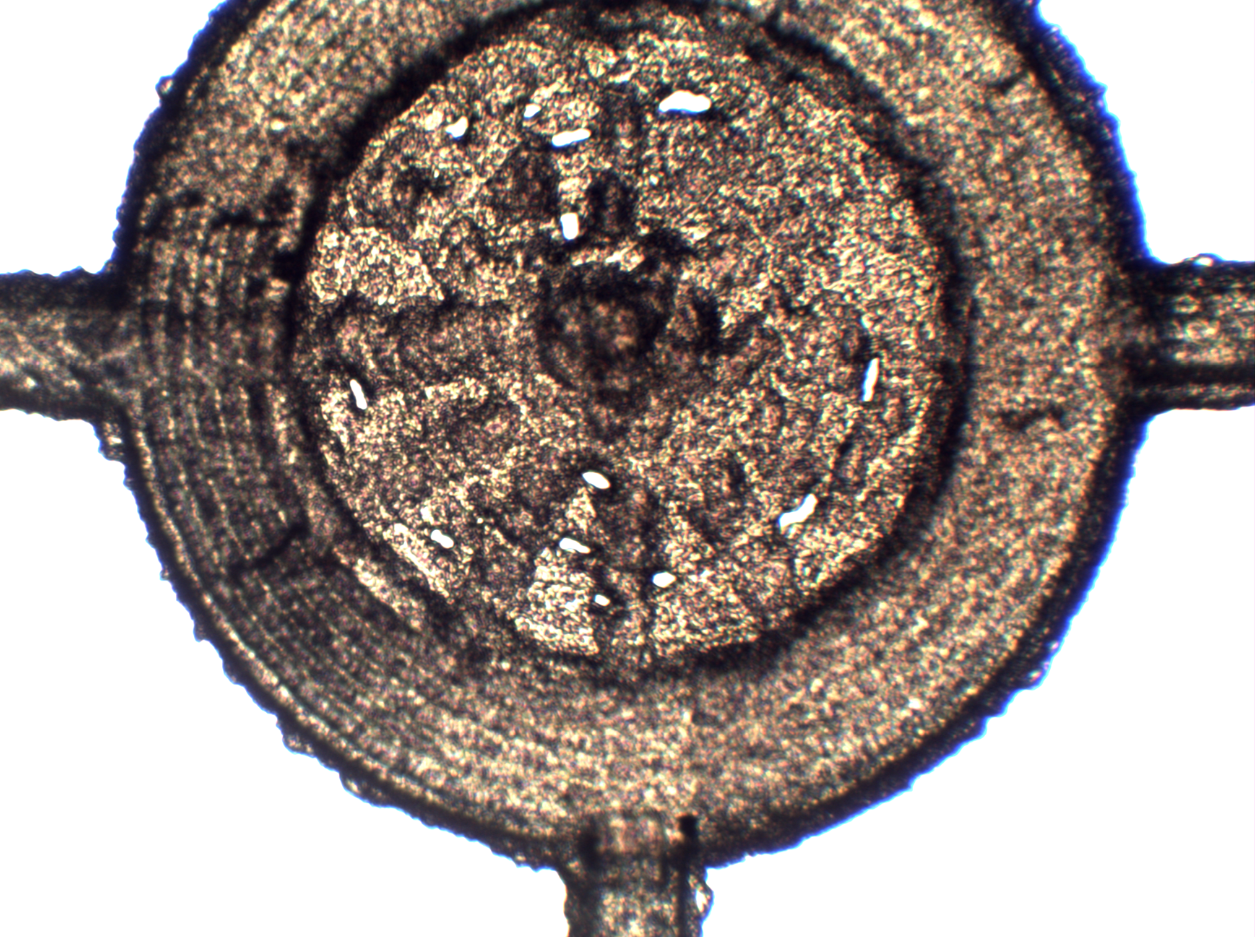 
An often criticized aspect of parallelized microfluidic systems is how the tubing to feed the devices becomes increasingly complex with the numerical increase in parallel processes. To address this, we opted to build a reservoir system that feeds the inlets simultaneously. Using our design, we only need an inlet for each fluid, and an outlet for the droplets, decreasing the amount of tubing three-fold.


An important design consideration is having similar pressure drops and velocities at each of the outlets, in order to assure that mass-flow is uniform at each of the chip inlets. Using the software, COMSOL Multiphysics, we built a model to simulate the filling of the reservoirs. This was done to have a more informed decision as to where the reservoir inlets and outlets should be located. You can learn more about our flow model here. 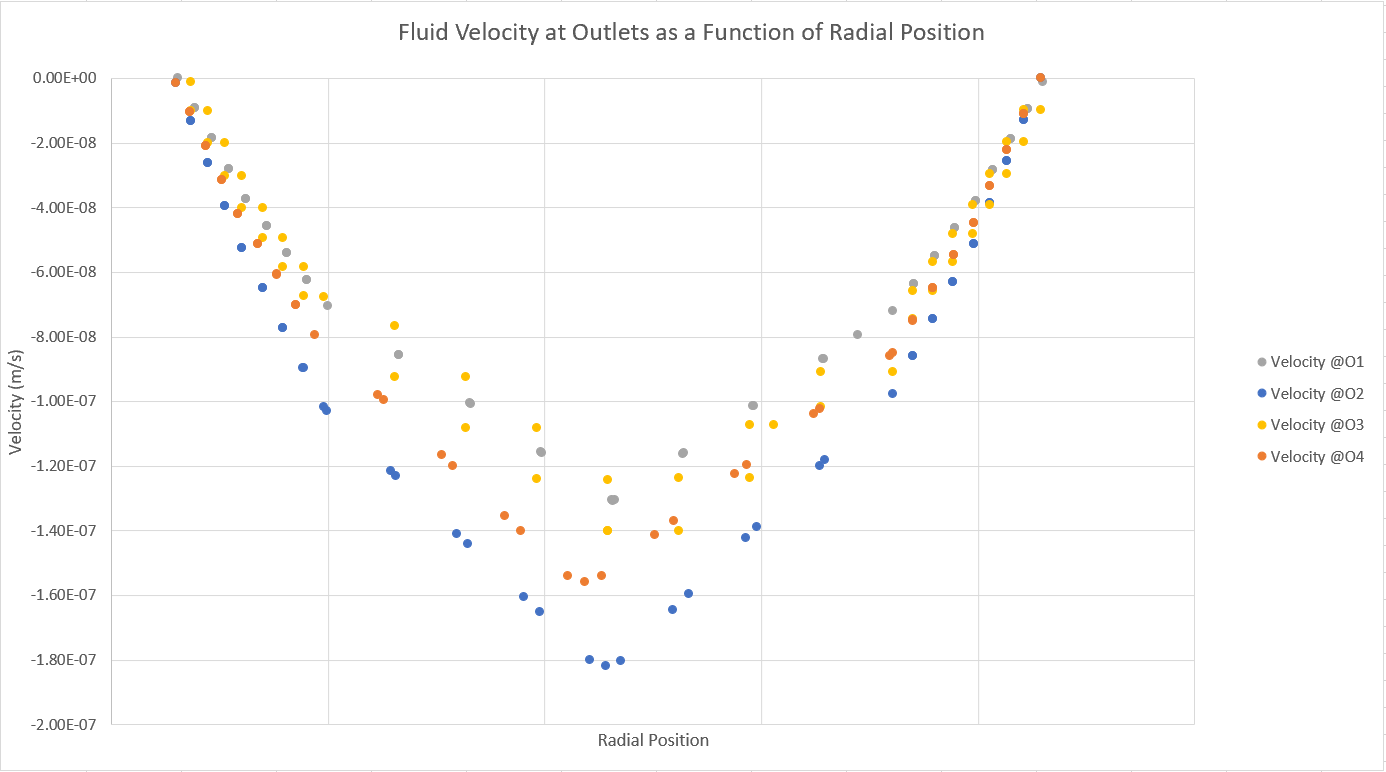 Figure 7. Fluid Velocity as a Function of Radial Position


The results of the model showed that the pressure and velocity values were similar enough to build the reservoirs using the layout we had designed.


To build our feed reservoirs, we decided to use sheets of transparent acrylic. A layer with the reservoir and a layer with the inlets was cut. The dimensions of these pieces were 7x7x0.5 centimeters. Applying a small amount of acetone onto the one of the bonding surfaces, and pressing and holding the surfaces together allowed the pieces to bond. Using a two-part epoxy resin, we were able to bond our N-333 Nanoport Assemblies to the reservoir inlets, to get a tight seal between the tubing.


To assemble the entire device, we plasma bonded a 30mL sheet of cured Polydimethylsiloxane (PDMS) (Sylgard 184), at a 1.5:10 curing agent to monomer ratio, to the glass chip. Holes with a 2mm diameter were punched into the PDMS, corresponding to where all of the channel inlets were located. A very small amount of precured PDMS at the previous composition of 1.5:10, was applied to the bonding faces of the reservoir, and positioned onto the PDMS sheet. This assembly was cured at 80 degrees Celsius for 4 hours on a hot plate. The Tygon tubing was then attached to the Nanoports and two Syringes filled with the fluids; one with the droplet phase and another with the continuous phase. In early testing, these fluids were water and mineral oil. The syringes are then set up onto a syringe pump (Harvard apparatus pump 33). The outlet tubing was connected as well, and drained out into an arbitrary collecting chamber for observation. 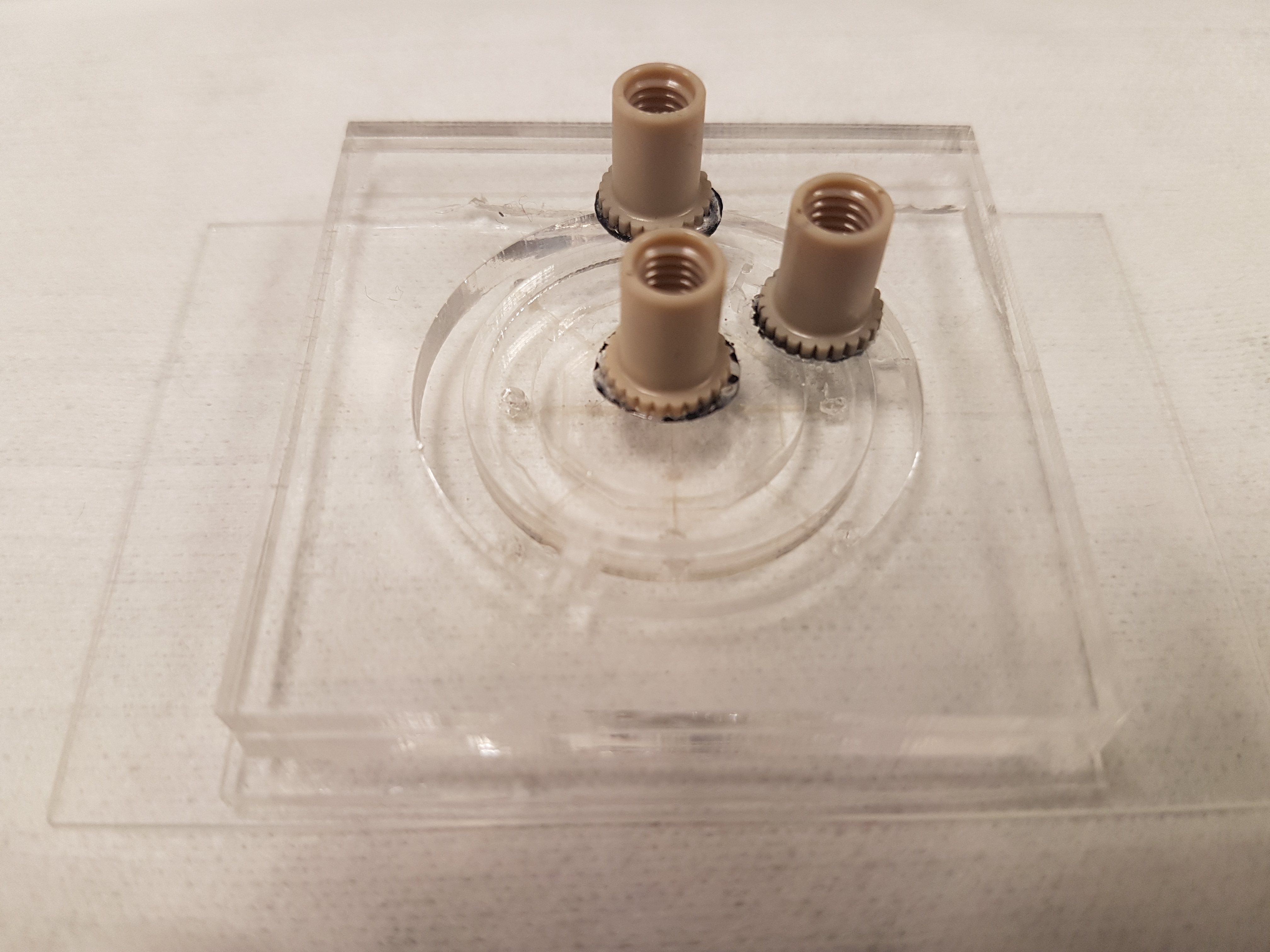 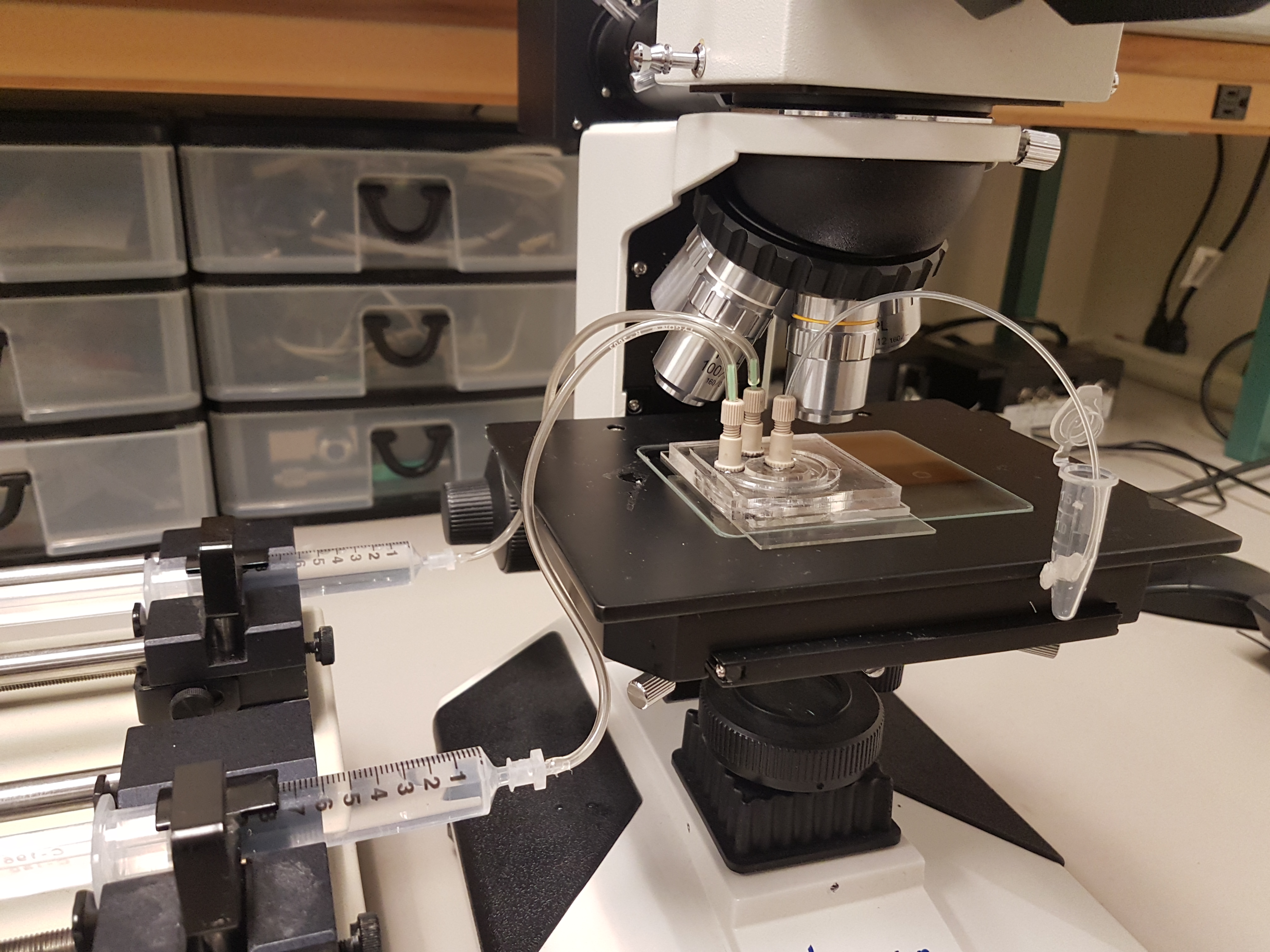 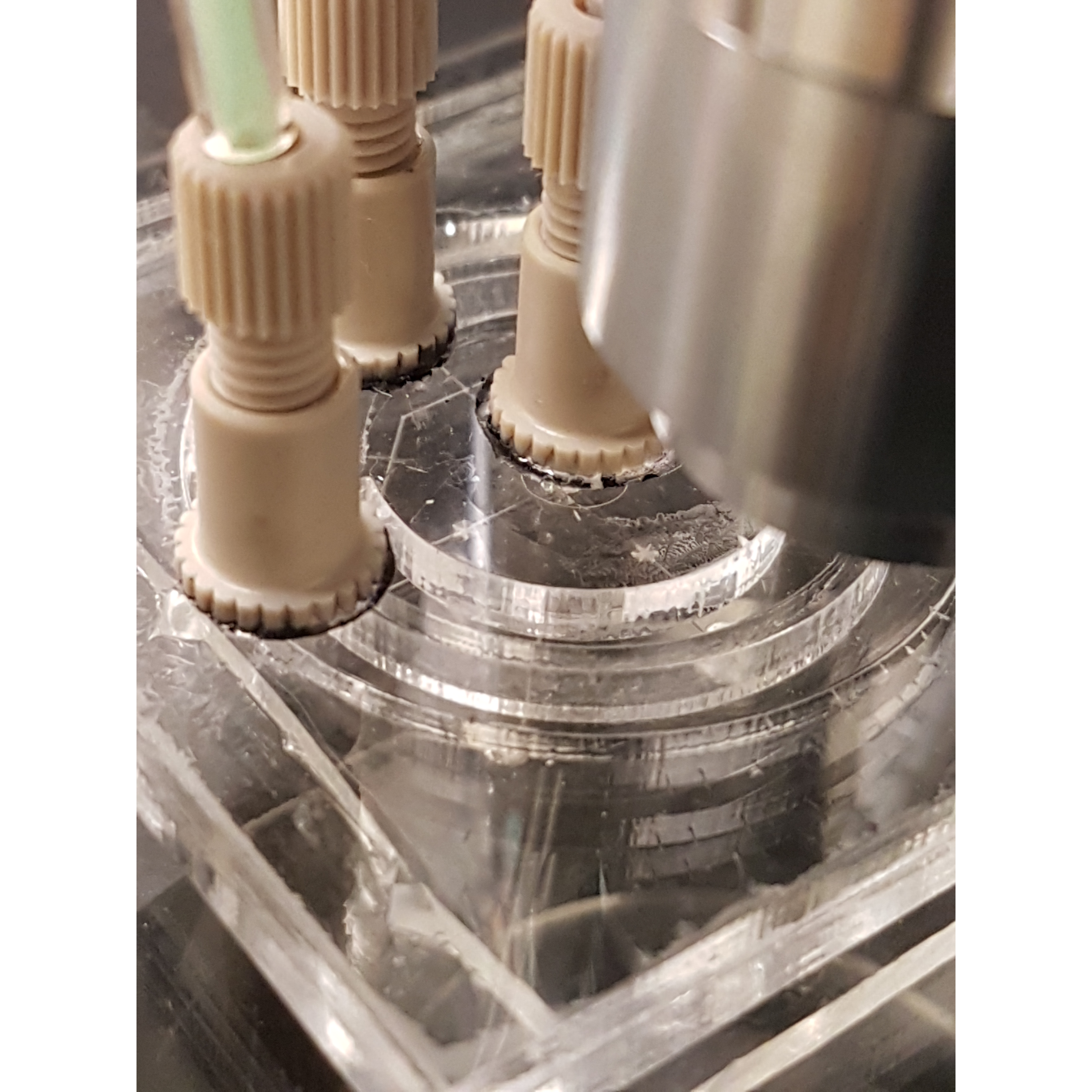 Figure 10. Close up image of DFM channels and reservoir


As of now, we have been able to pump fluid into and out of the DFM at rates up to 1mL/min without observing any leakage. Moving forward we will perform a more rigorous stress test, to observe what pressure can be achieved before fluid leaks out of the reservoirs. After this point, we will characterize what flow ratios between the continuous and droplet phases are needed to create monodisperse droplets.


Bulk electroporation methodology has often been shown to result in poor cell viability. Transgene silencing is also often reported after transfection. Microfluidic electroporation has previously been shown to increase transfection efficiency by multiple orders of magnitude. The advantages of physically scaling down an electroporator stems from the exceptional heat diffusivity of microchannels, and in this case, microdroplets. In bulk systems, internal heating (referenced as Joule heating) is a factor. Scaling down the size also allows the applied electric field to be much smaller, yielding low electrical potentials and better cell viability (Headen, 2018).


We chose to begin the design process on a Droplet Electroporation Module (DEM) due to its’ applicability in regular lab protocols, and the importance of efficient transfection methods in end-to-end production. We had designed a DEM that has 9 electrode pairs for transfection.


We were also interested in determining a simpler way to manufacture electrodes into glass microfluidic devices. Initially, we had thought that drilling holes into the glass substrate of 100 micron diameter would be achievable with the help of Dr. Owusu. However after consulting with him we had learned that engraving holes through glass would be a very difficult challenge. Assuming that the holes could be made, we would proceed by filling them with a conductive paste, to create the positive electrode. We were interested in using a sheet of conductive PDMS to act as a channel cover and ground electrode. Moving forward, we will develop this device and see if we are able to apply current across the channels when droplets are flowing through them.