Eukaryotic chassis vary significantly from prokaryotic chassis in certain elements pertaining to regulation of gene expression. Eukaryotes have a complex epigenetic code that involves histone modifications and DNA methylation, as well as innate defense mechanisms that target exogenous DNA inserts (Matzke et al., 2000). These factors contribute to the gradual reduction in expression of an integrated gene over time, commonly known as gene silencing. Furthermore, integrated genetic constructs often contain DNA regulatory elements such as enhancers and promoters that may interact bi-directionally with those endogenous to the genome (Recillas-Targa et al., 2004). Referred to as neighbourhood effects, these interactions can lead to highly variable and unpredictable expression levels of all genes involved.


In order to mitigate the aforementioned issues, our team investigated eukaryotic chromatin-modifying elements (CMEs). Within this broad category of DNA elements, insulators and ubiquitously-acting chromatin opening elements (UCOEs) were selected for further exploration due to their unique properties. We were interested in creating a collection of parts in the registry that would help to increase the utility and efficiency of eukaryotic synthetic biology.


The mechanisms of insulator function have been previously described in literature. When placed in between enhancer and promoter, insulator sequences recruit DNA-binding proteins capable of interfering with interactions between these regulatory elements (Ong et al., 2014). By designing a system in which our gene inserts are flanked by a well-characterized 1.2kb insulator sequence from the 5' end of the chicken β-globin (cHS4) gene, we aimed to create an isolated and protected pocket virtually free from such neighbourhood effects (Pikaart et al., 1998). 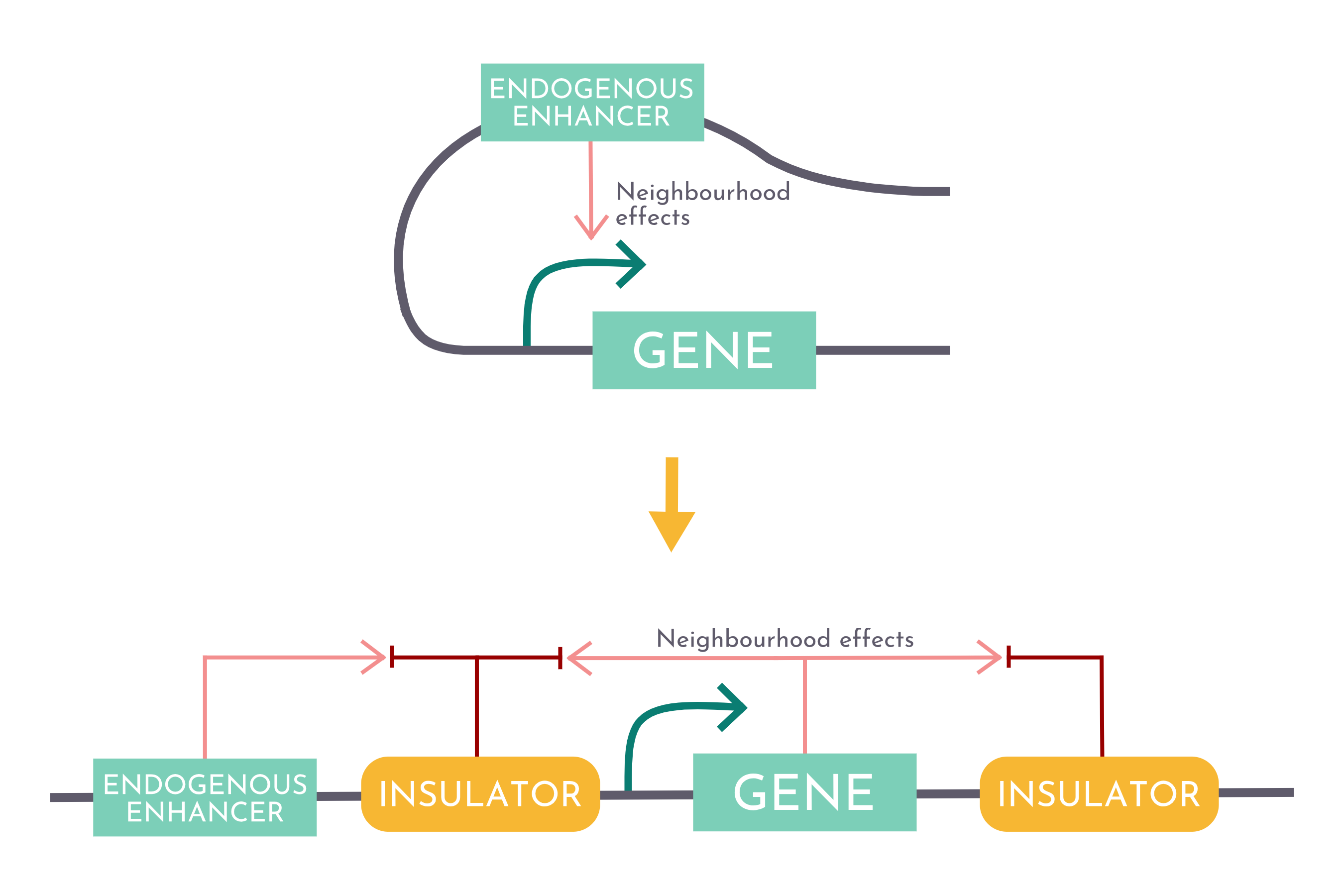 In addition to their enhancer-blocking function, insulators can act as a barrier to prevent the spread of closed, unexpressed DNA known as heterochromatin which ultimately contributes to gene silencing. This is accomplished by recruiting or sequestering histone-modifying enzymes, as well as by blocking DNA methylation mechanisms (Giles et al., 2010). 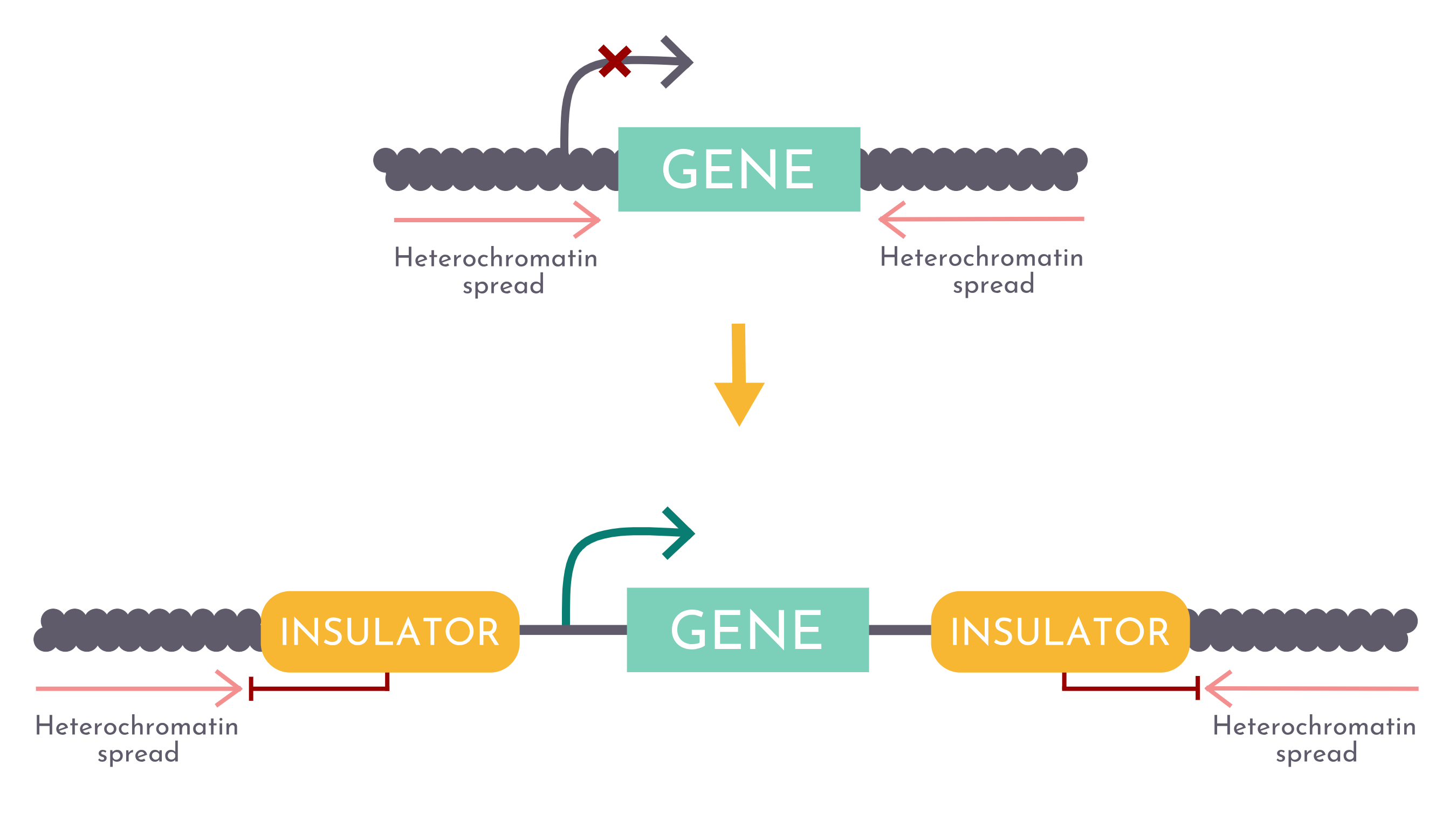 
UCOEs can be defined as methylation-free, CpG-rich sequences found upstream of housekeeping genes within eukaryotic genomes (Romanova et al., 2017). They function not only to prevent gene silencing, but can actively re-open closed chromatin by promoting demethylation of promoter DNA (Romanova et al., 2017). We selected A2UCOE for use in our system, as it is the most commonly used UCOE sequence (Harraghy et al., 2015). The sustained increase in gene expression levels observed when using such a sequence in eukaryotic gene integration schemes has been thoroughly documented, though the mechanism utilized by these elements is not well-understood (Kunkiel et al., 2017).


The ultimate goal of the Snip, Equip, Flip system is to integrate large-scale gene inserts into eukaryotic genomes in a targeted manner, as well as to maintain the expression levels of these gene inserts over time. Through extensive literature research, we were able to identify two unique chromatin-modifying elements to include in our system. A2UCOE and the chicken β-globin (cHS4) insulator were synthesized by Genscript with flanking restriction sites which allowed us to clone them into our multiple-cloning site, as outlined on the parts page. We successfully cloned these parts into the pSB1C3 backbone for DNA submission. We hope to validate our system with experimentation in Flp-In T-REx HEK239 cells in the future.


By submitting the novel A2UCOE (BBa_K2605003) and the chicken β-globin (cHS4) insulator (BBa_K2605004) parts to the registry, we opened the door for the development new class of eukaryotic parts. They are valuable for use both with our parts collection and individually. Chromatin-modifying elements could help to increase the frequency of eukaryotic chassis-use, both within the scope of iGEM and beyond.