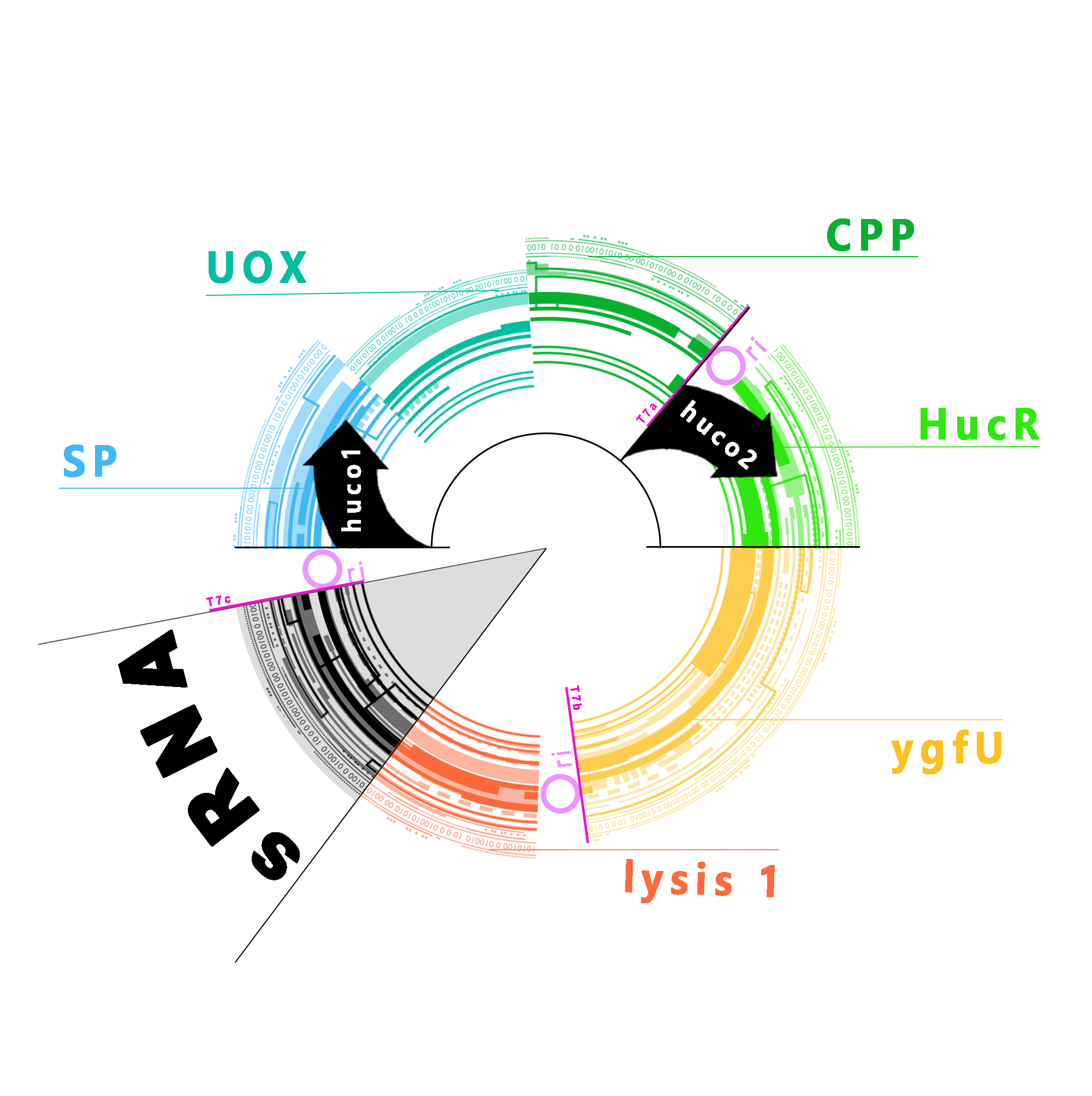 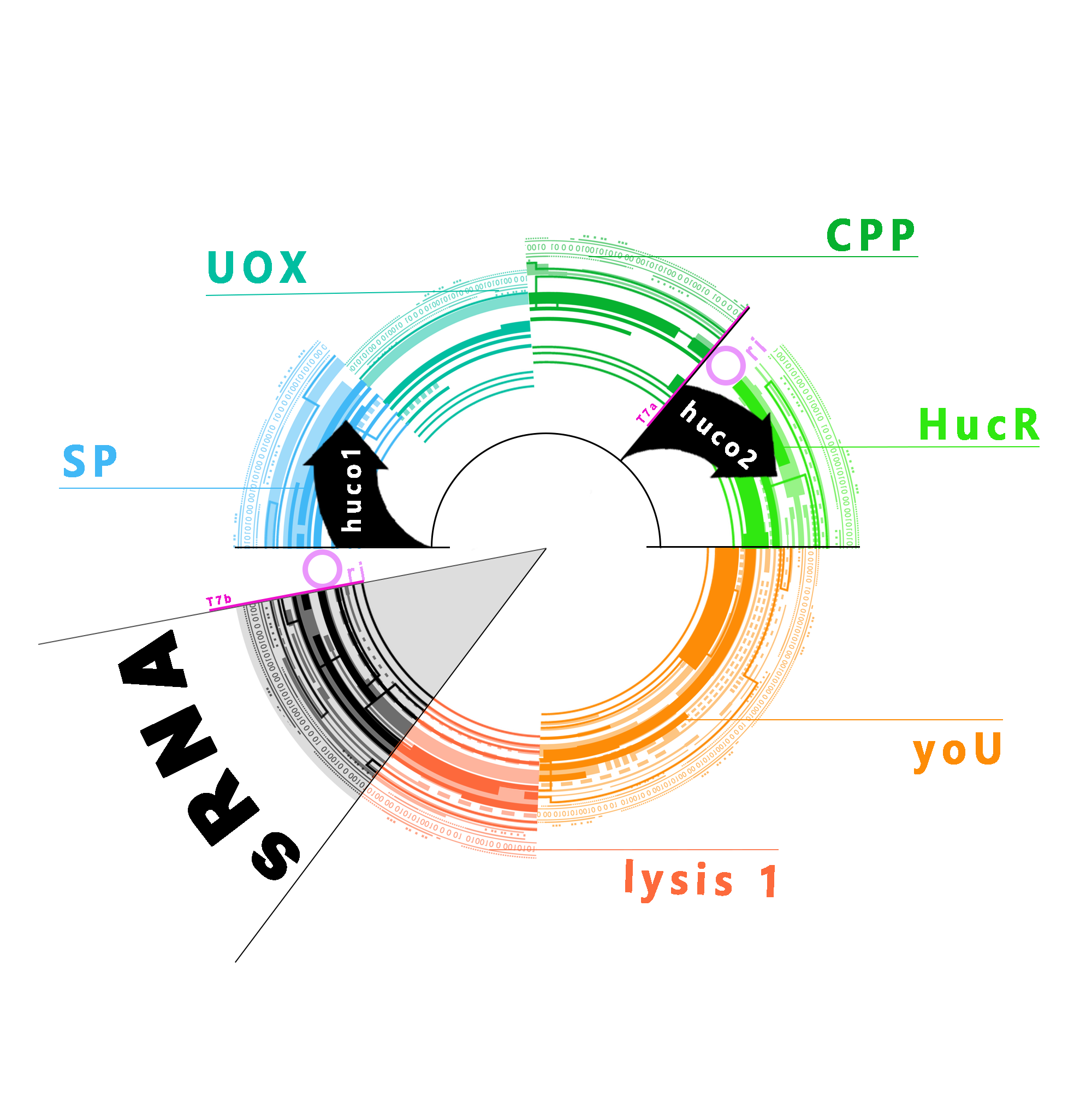 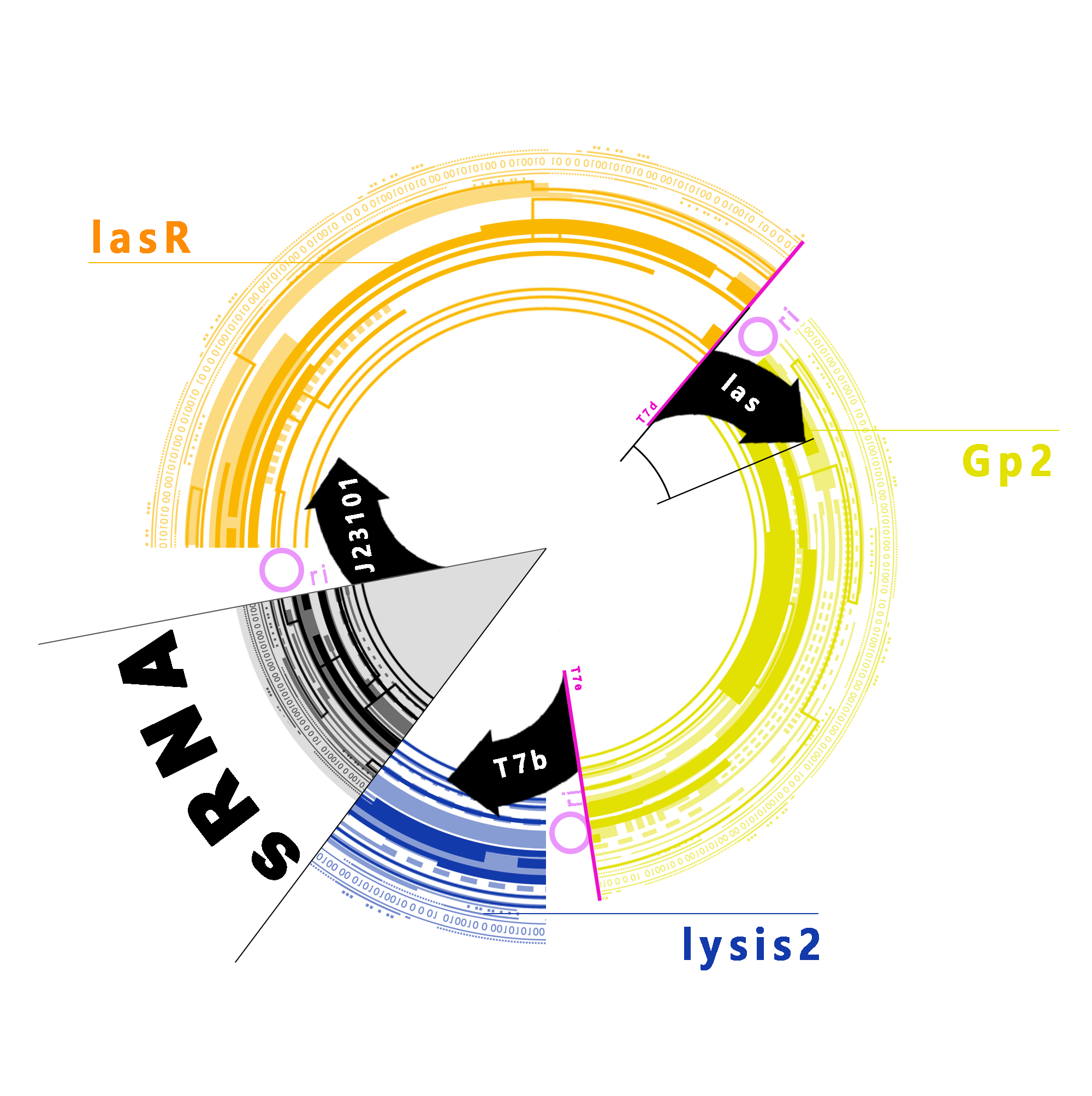 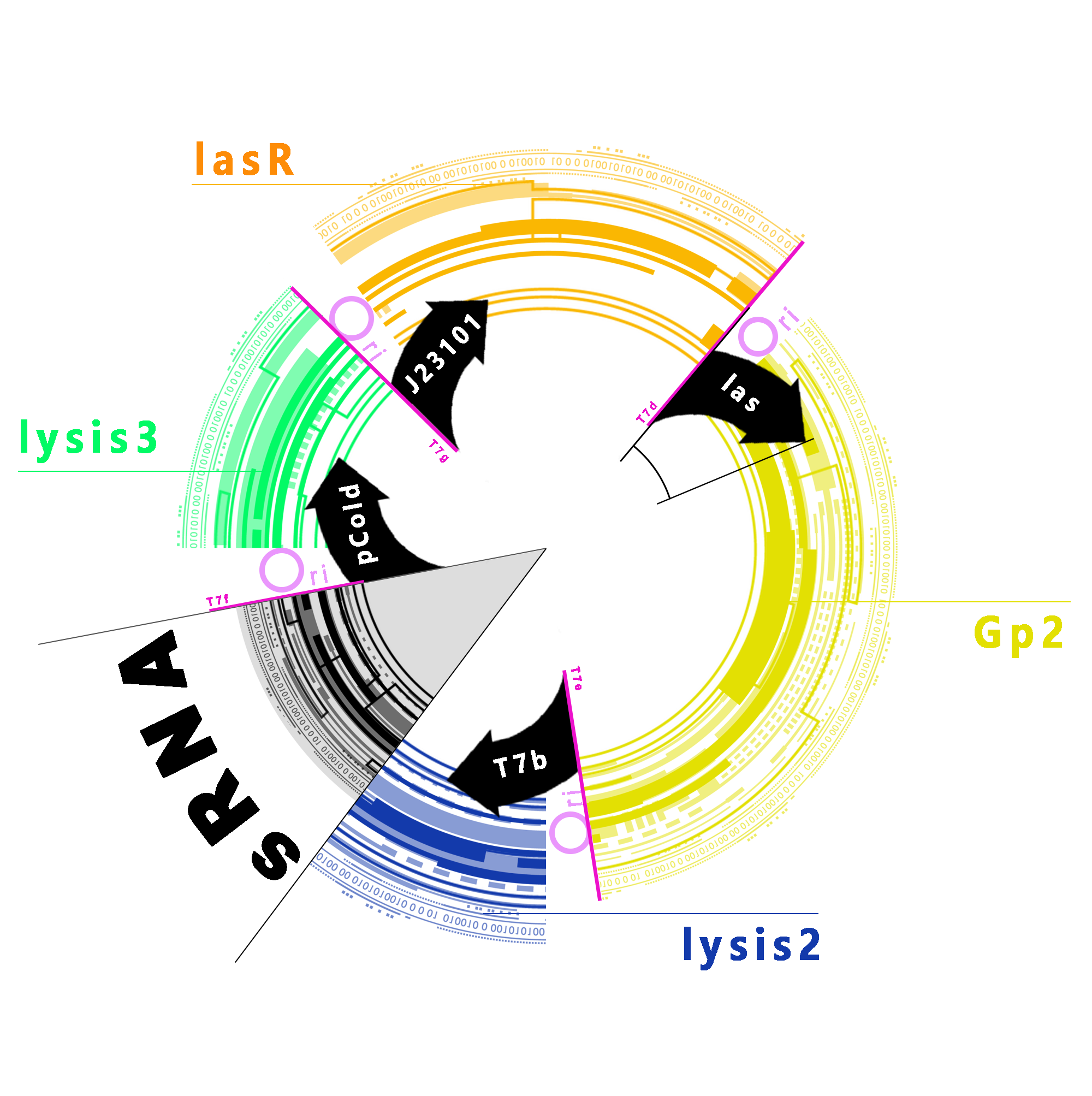 The choice of chassis organisms is very important to our entire experiment. It determines not only the feasibility of our experiment, but also the difficulty of our experiment. We chose the chassis organism as Nissle e. coli because its genetic manipulation is relatively simple and it is also a intestinal probiotics without damage to the host. The exocrine system of Nissle e. coli is relatively mature, and some breakthroughs have been made in recent years [1,2]. Therefore, Nissle e. coli is one of the most promising engineered strains currently used to deliver proteins to host cells. This is also why we choose Nissle e. coli.

We decided to use 4 signal peptides (OpmA, PeLB, phoA, STiI) for secretion test, and designed the following 5 sequences to test our secretion system:

Among the four selected cytoosmotic peptides, cyclopeptides were found in reference 5 to deliver phages from the intestines of mice to the blood of mice.

In order to prevent the excessive growth of our Nissle escherichia coli in patients' intestines, disrupt the balance of intestinal flora in patients and affect the physical health of patients, we decided to set up the quantity control system of bacteria flora. We refer to the 2016 imperial flora control system, using lasR induced e. coli secretion of N - acetyl homoserine lactone, when the concentration of N - acetyl homoserine lactone after more than a threshold, Las lasR activates expression promoter downstream genes. We designed Gp2 in the downstream gene. Gp2 is an RNA polymerase inhibitory protein that inhibits the growth of escherichia coli, so as to control the quantity of Nissle escherichia coli in the intestinal tract.

Figure 2 We use lasR and Las promoter to control the expression of Gp2, when N - acetyl homoserine lactone concentrations below the threshold of the system, and PLas is in closed state, not express Gp2; When the concentration of n-acetyl hyperserine lactone was higher than the threshold value, lasR activated PLas, leaving PLas in an open state, and the system expressed Gp2 normally.
Lethal system:

In order to prevent the loss of our Nissle escherichia coli to the external environment, compete with the dominant local strains, and disrupt the normal ecological balance of the environment, we decided to set up in vitro lethal system. Since we were involved in more sequences, we decided to design two plasmids and introduce them into one bacterium at the same time. Therefore, we also set up the plasmids loss killing system.

Due to the high concentration of uric acid in the intestines of hyperuricemia patients, we use uric acid as the response signal of the lethal system. When the uric acid concentration exceeds the threshold, HucR is inhibited by uric acid, and Phuco is in the open state. Subsequent genes can be transcribed and translated normally, but since lysis1 is inhibited by sRNA, the bacteria will not be cracked. When the uric acid concentration was lower than the threshold value, HucR inhibited Phuco, and Phuco was turned off. Subsequent genes could not be transcribed and translated, so that sRNA inhibiting lysis2 could not be expressed, while lysis2 could be normally expressed, resulting in death of bacteria. Due to the high concentration of uric acid in the intestinal tract of uric acid patients, the death rate of bacteria in the patient is not high. However, when the bacteria are lost to the external environment, the uric acid concentration in the external environment is lower than the threshold value, which activates the lethal system of the bacteria, leading to the death of bacteria cracking and reaching the purpose and effect of in vitro death.

Death in vitro was controlled by pCold to lysis3. PCold is cold shock plasmid in vitro in 16 ℃ under the condition of using IPTG induction of 3 h can activate lysis3, killed bacteria cracking, achieve the purpose of in vitro to death and effect. PCold came from the IGEM team of Northeastern University, and our two teams had a friendly interlab exchange.
References: