Along with the explosive development of information technology, increasing reliance of human beings on information has made it become one of the most important issues. Data storage and transfer systems, as key components of the information technology, are frequently under attack. Nowadays, online storage and transfer systems have brought us great convenience; however, because of their sharing properties, these systems are very vulnerable to cyber attacks. As a consequence, the data deposited in and transferred via these systems can be stolen, tampered or even destroyed completely. To avoid these, people have started looking for more safe ways of storing and transferring messages [1,2]. Bio-encryption can be a potential solution. The concept of storing messages in DNA molecules was proposed and published in the 1960s by the Soviet physicist Mikhail Samoilovich Neiman. He came up with the idea that digtial data can be stored in the base sequence of DNA. With the arrival of molecular biology era, scientists have realized that DNA (Deoxyribonucleic acid) is more than a biological molecule carrying genetic information. Its inherently large-scale parallelism, ultra-low energy consumption and ultra-high-density storage capacity made DNA a promising medium for data storage and encryption. Particularly, DNA cryptography can be a potential alternate to the traditional cryptosystems. Obviously, DNA cryptography is immune to cyber attacks because of its distinctive principle of encryption. Based on these properties, we, NEFU 2018 iGEM team, have developed a multilevel bioencryption DNA-based information storage and transmission system with multiple digital and biosecurity layers, including modules of security encryption, DNA sequence conversion and message integration. We expect our system will be capable of efficiently preventing anyone without our authorization from getting access to the data encrypted biologically.
To build the system, we first established the one-to-one matches between the English alphabets and the codons in yeast; then the expressed information was written in the mRNA sequences. Afterwards, we transferred and integrated the encoding DNA sequences into the yeast genome[3] to store and deliver the message. To prevent deciphering of the information, we have added introns[4] that can be spliced to confuse the stealers. We included additional measures of molecular biology, which can block unauthorized access and ensure the safety of stored information. Compared to the electronic or digital storage and transfer systems, our approach is extremely secure since it cannot be affected by cyber attacks. Moreover, our system can easily provide customized services, because it is not difficult to adjust the “message & keys” and the biosecurity layers according to different requirements.

First, we were planning to convert English sentences into oligonucleotide sequences. So we designed the CODING module as following:
Every letter has its own frequency in English words, so does each codon in organisms. Therefore, we created a coding list, in which each letter corresponds to several codons with the same frequencies. In addition, we composed a program that can easily convert sentences into DNA sequences. See more about CODE BOOK 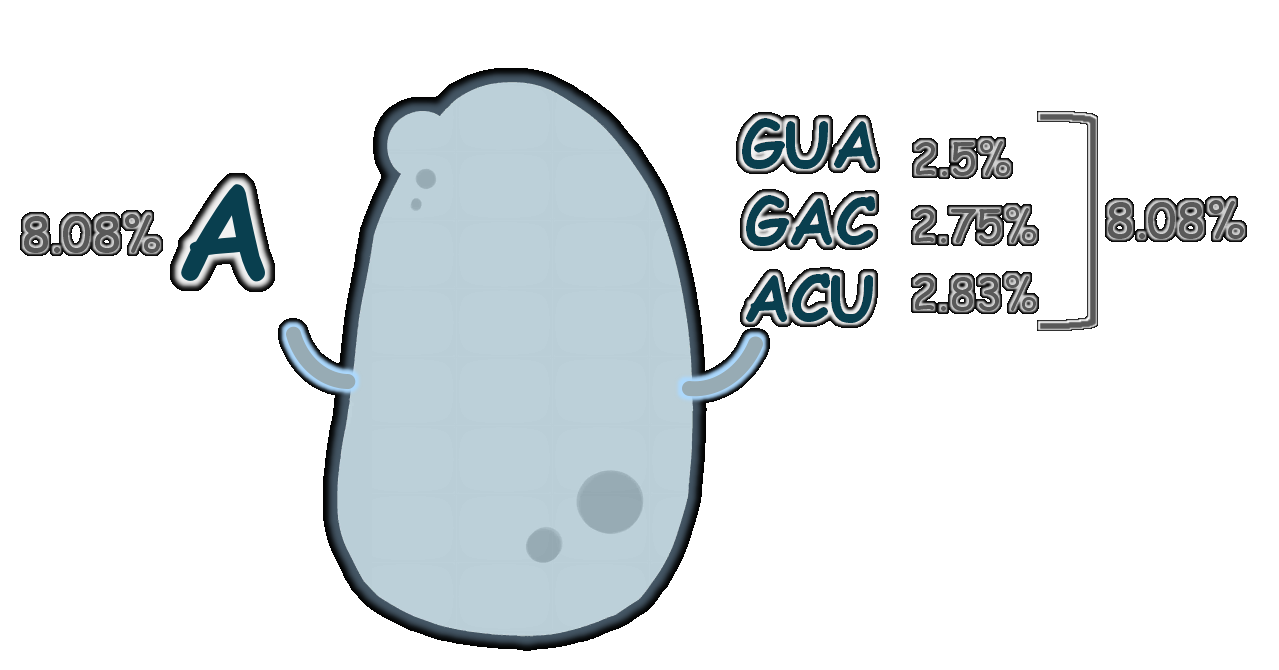 Just encrypting the information by CODING is not safe enough. To strengthen the security of the message, we designed the LOCKING module as following:
The main part of the LOCKING module is a DNA fragment with a stem loop structure generated by introducing the stem loop in the upstream of the message-carrying DNA sequence. The stem loop structure blocked the movement of RNA polymerase, which caused transcription abortion[5]. In this way, we prohibited the unnecessary expressions of the message. Nobody but the receiver who has the "key plasmid" can decode the information by initiate transcription of message-carrying DNA. Key plasmid is a particular plasmid expresses microRNA which can resolve the upstream stem loop specifically, RNA polymerase can bind the promoter and information will be transcripted normally.

In order to prevent the information in DNA from being stolen, we integrated a MISLEADING module into the system, which is capable of confusing the stealers by the following measures: 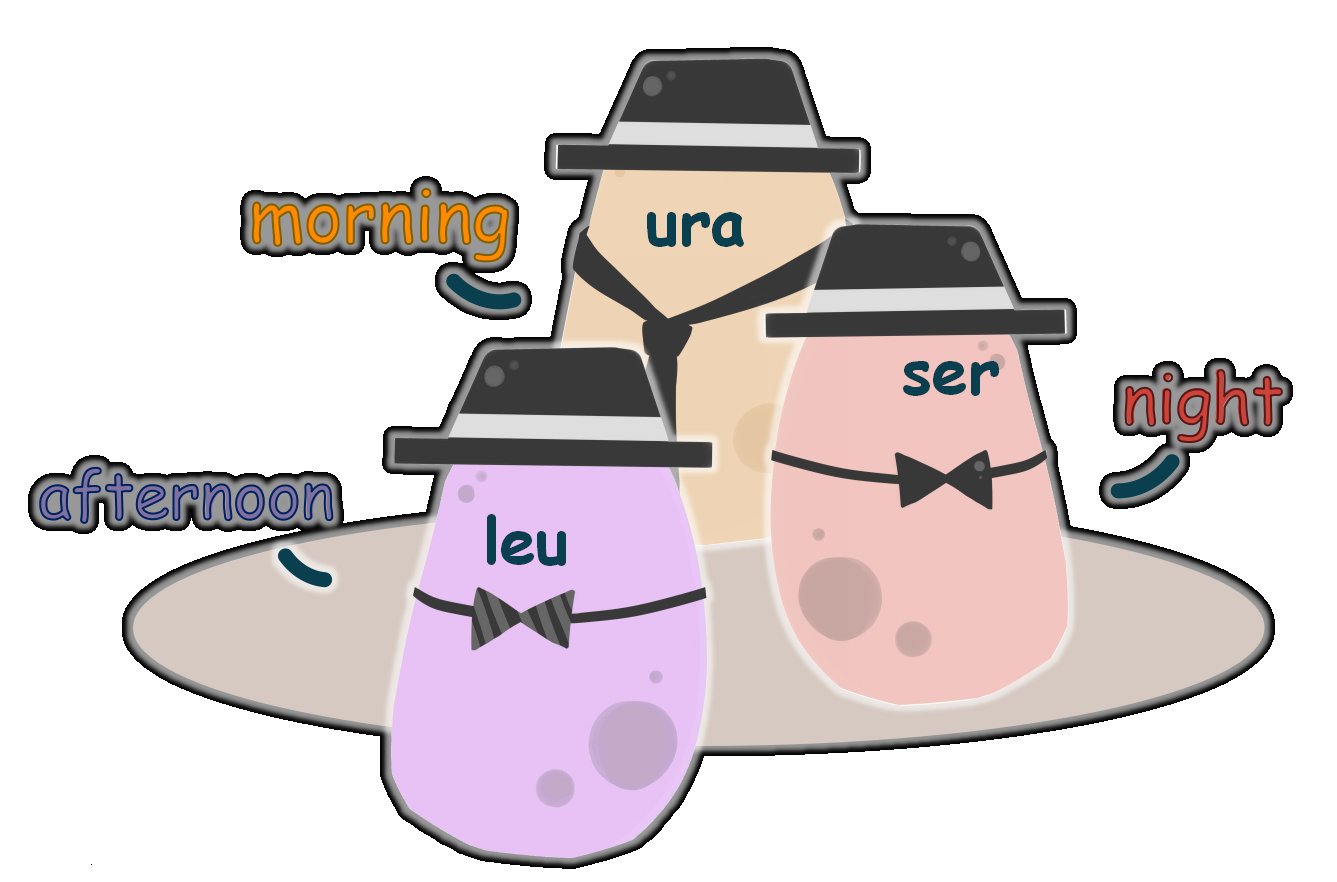 By inserting introns into the message-carrying DNA sequences, we changed the contents of the information. If the stealers try to extract the information by DNA sequencing directly, only the wrong message can be read out.

We also used EMS[7] mutagenesis to increase the polymorphism of the yeast genome sequences, which further raised the difficulties of deciphering the information.

As we know, any puzzle will be solved eventually as long as the research time is long enough. With the time going by, all of our barriers could be eventually defeated. Therefore, we added the module to limite the time of reading out the information by the suicide of yeast spores:
While the carrier yeast spore was type a, we also used another one called type α[8]. Both types of yeast have receptors that reciprocally recognize each other. When the two types of yeast were co-cultured to a certain density, type α secreted α factor that bound to the membrane proteins on the cell surfaces of type a to pass signals. Then the cells of type a receiving the signals induced the expression of Bax(α) that has been engineered into the yeast genome. The product of the suicide gene Bax(α) could lead to apoptosis of the message-carrying yeast[9]. 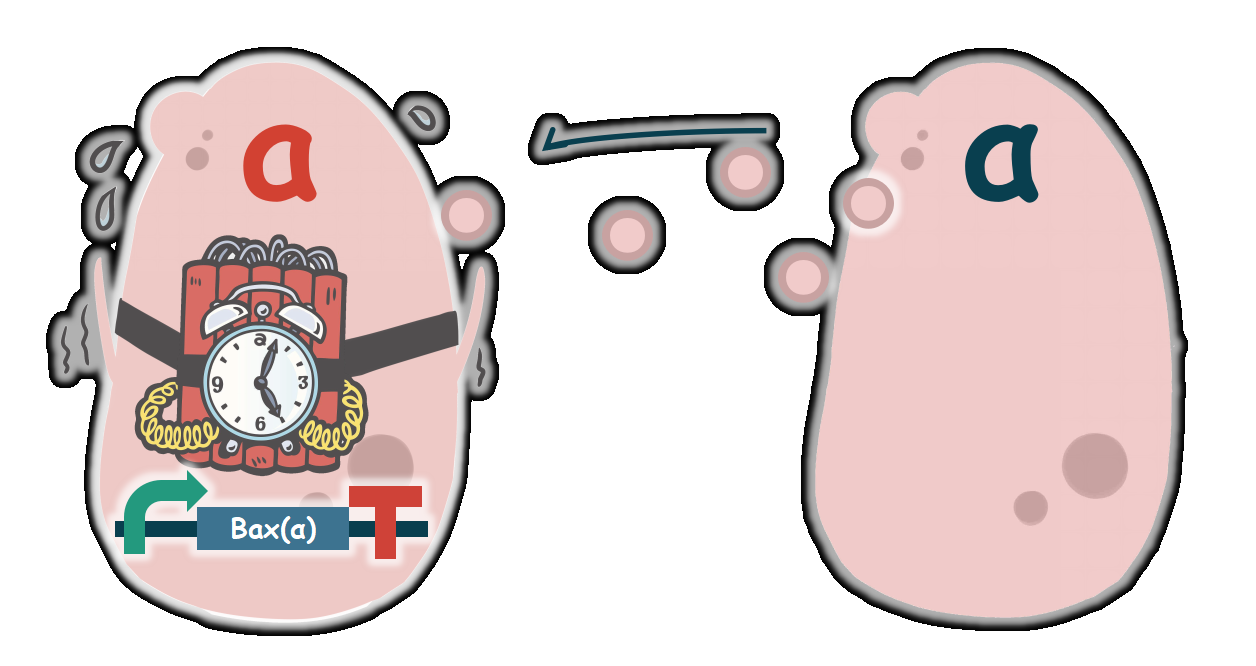 We used the appropriate medium to select the yeast carrying the true information. After getting the right yeast, we added the "key" (a plasmid that can transcribe siRNA) transformed into yeast cells to bind and resolve the stem loop structure, leading to RNA transcription of the stored message. Only the person with the right key to a given lock can obtain the information that we wanted to convey. Then, the message can be acquired by DNA sequencing and data analysis.