Biomedical implants, such as prostheses, catheters and several other implanted devices, can improve the patient’s quality of life. Nevertheless, because they are artificial, handled from outside the body, and rarely have an antimicrobial property, they increase the risk of infection. In fact, device-associated infections account for 25.6% of all health-care-associated infections in the USA [1].

Orthopedic implant infections are caused by the development of pathogenic microorganisms on an inert material, allowing bacterial adhesion and biofilm formation on the implant. Biofilm-related infections frequently lead to chronic infections and require implant replacement. They are therefore responsible for a significant medical (on both the patient’s and surgeon's point of view) and economic burden [2] [3].

A biofilm is a community of microorganisms surrounded by an extracellular matrix produced by the microbes themselves. They can attach to various surfaces whether living or inert. Biofilm formation is a process that begins with the attachment of the microorganism, in our case bacteria, to a surface on which they can grow under the control of specific biofilm genes expression. Bacteria living in a biofilm produce extracellular polymeric substances (EPS) composed mostly of water with polysaccharides, proteins, lipids and extracellular DNA [4] [5].

The process of biofilm formation applies to both Gram-negative and Gram-positive bacteria. It involves different stages, from adhesion of planktonic cells, microcolony formation, EPS production and biofilm maturation to dispersal stage, as shown in Figure 1. 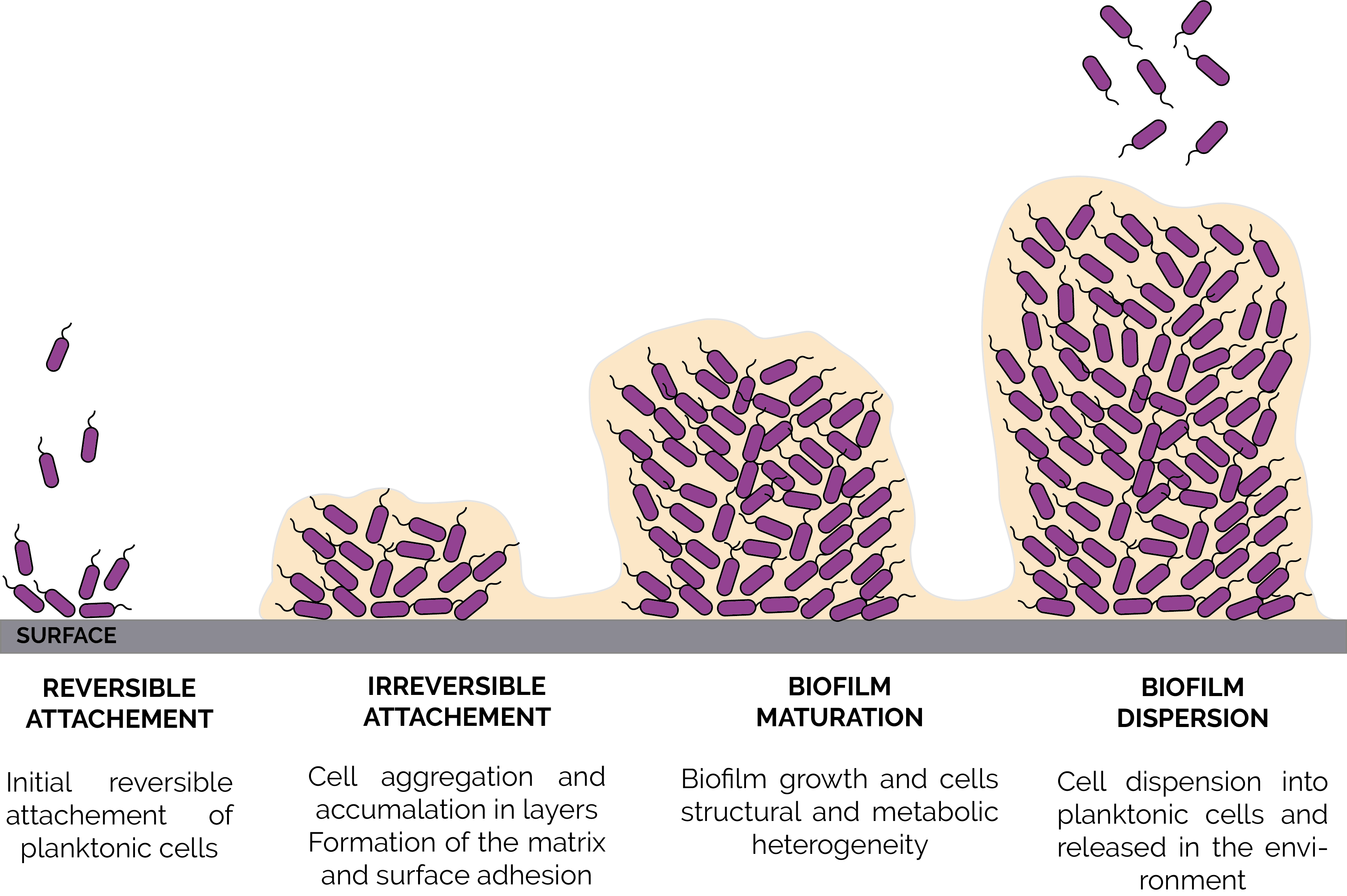 How can biofilms form on an implanted device and elude immunity and antibiotic treatments?

A major issue in the fight against bacteria is their organization as biofilms. These bacterial aggregates strongly adhere to the biomaterial surfaces. In this bio-mechanical configuration, the implant-infecting biofilms can elude innate and adaptive host defenses as well as antibiotic therapies [7].

In fact, the biomaterial becomes encapsulated in layers of tissues which isolate the biofilm from the surrounding tissues and so shields it from the immune system. At the same time, the extracellular matrix also protects the microorganisms from immune cells [8].

Biofilms, by their architecture, give the bacteria that compose them an inherent resistance to antimicrobial agents by making it difficult for them to reach the bacteria [4]. Antibiotic treatments may lead to the removal of most of the bacterial population, but some of the bacteria frequently survive and can reconstitute the biofilm later when the antibiotic therapy is stopped [7]. The evasion of host defense and tolerance to antibiotics leads to the establishment of chronic infections.

Which microorganism is the most frequently responsible for prosthetic-joint infections?

Staphylococcus aureus, a Gram-positive coccus, is the most commonly isolated microorganism from orthopedic-associated infections, accounting for more than 40% of hip and knee prosthetic-joint infections shown by Table 1 [9]. Other species such as Staphylococcus epidermidis and Gram-negative bacteria including Pseudomonas aeruginosa and Escherichia coli are less frequent implant-infecting bacteria. The situation is alarming as implant-infecting S. aureus strains have high rates of antibiotic resistance against commonly used antibiotics (e.g. methicillin, gentamycin) [7]. 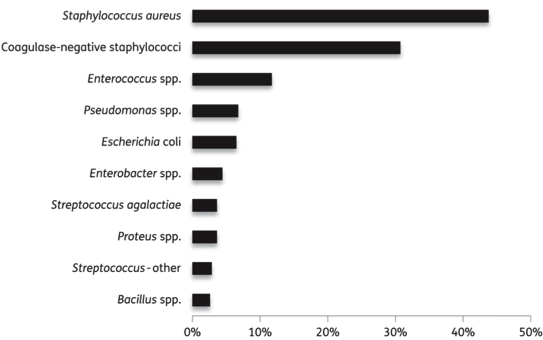 Which treatments are currently used?

In most cases, the treatment after a prosthetic-joint infection involves the removal of the implant followed by several weeks of antibiotic treatment. Apart from the fact that it presents a heavy burden for the patient, the extended hospitalization and potential re-operation represent a considerable excess of cost for the health industry. A study led in France [9] estimates that the revision of infected prostheses multiplies the cost of the total procedure by a 3.6 factor.

Re-operation is almost always necessary because bacteria growing in biofilms are more resistant to antimicrobial therapies and dissolving biofilms using antibiotics is a complicated task. To fight this serious problem, new treatment strategies have already appeared, such as antimicrobial peptides (AMP), bacteriophages, matrix-degrading enzymes or quorum sensing inhibitors [4]. An alternative approach to fight against prosthetic infections is to directly prevent pathogenic bacteria from forming a biofilm, thus blocking the pathogen development of resistance to the immune system and antibiotics.

Our strategy is to concentrate our efforts on fighting against S. aureus, since it is the leading cause of infections. It is known that over time, S. aureus strains can develop resistance to antimicrobial peptides or toxin/antitoxin systems due to the selective pressure [10]. We decided to focus on preventing the formation of a biofilm by S. aureus, because it is the state in which pathogens develop resistance to both the immune system and to antibiotics [11] [12]. To overcome the problem, we chose the disturbance of quorum sensing as an anti-biofilm strategy. Communication within a bacterial community relies on the production and detection of signal molecules, in a system called quorum sensing. For instance, pathogens use quorum sensing to regulate and coordinate the biofilm’s architecture and the production of toxins and virulence factors [12]. This is why we focused on quorum sensing inhibitors as a promising anti-biofilm strategy.

S. aureus is a gram-positive coccus that uses AIP quorum sensing to regulate the colonization and the production of virulence factors [13]. This microorganism is able to go from a benign phase to invasion thanks to a switch in gene expression controlled by the accessory gene regulator (agr) QS system [15]. This system is a signalling circuit that produces and senses AIP. Its chromosomal locus encodes two transcripts: RNAII and RNAIII (Figure 2).

The first system, RNAII, is a polycistronic transcript that is produced by the promoter P2 and encodes for four proteins – agrA, agrB, agrC and agrD – that allow the sensing properties of S. aureus [13] [16]. First, a small peptide is encoded by agrD, and is transformed into an auto-induced peptide (AIP) by AgrB, a transmembrane protein. AIPs from all the bacteria accumulate in the extracellular environment. Another transmembrane protein, AgrC, binds the extracellular AIPs and in turn, phosphorylates AgrA (the intracellular regulator). When phosphorylated, AgrA has an increased affinity for promoters P2 and P3 [4] [6]. Thus, there is an upregulation of all the agr system.

The promoter P3 allows the transcription of the RNAIII transcript, that is the regulatory molecule that upregulates the production of numerous secreted toxins [16].
When colonies of S. aureus multiply and grow, they secrete a protein called RAP. RAP accumulates outside the cells and when it reaches a threshold, it induces a histidine phosphorylation of its target molecule, TRAP. When TRAP is phosphorylated, it activates the agr system and the production of toxins. 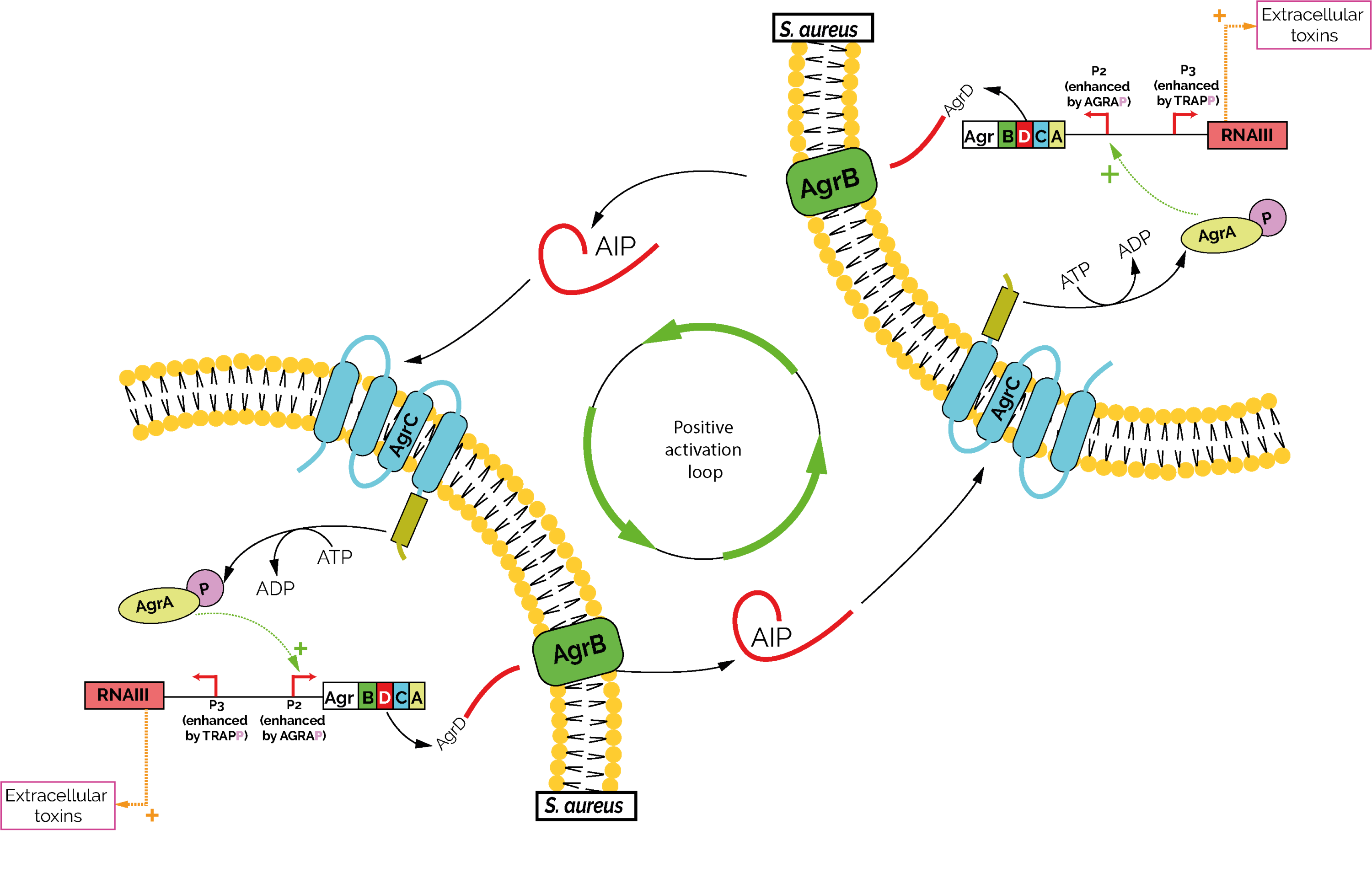 Figure 2: The accessory gene regulator (agr) system in S. aureus. The P2 operon encodes the RNAII transcript, which upregulates the production of AIPs.

Detection of S. aureus by our biofilm and inhibition of QS

We wanted our interface to produce a protein that would inhibit the development of S. aureus in the environment of the implant, but we did not want this protein to be secreted continuously and to accumulate outside the biofilm. We wanted our biofilm to start producing growth inhibiting molecules only in the presence of a pathogen. We decided to use the Biobrick BBa_I746100 from iGEM Cambridge 2007 Team and improve it by optimizing it for our chassis: E. coli BL21 strain.

We engineered the bacteria composing our biofilm by introducing the genes encoding for AgrC and AgrA proteins, the two proteins responsible for the detection of AIPs. We encoded them under the constitutive promoter BBa_J23107, from iGEM Berkeley 2006 Team. When AIPs are detected in the environment by the transmembrane protein AgrC, AgrA is phosphorylated and has an increased affinity for the promoter P2.

In our engineered bacteria, P2 encodes for a protein called RNAIII Inhibiting Peptide (RIP). RIP is a small peptide (seven amino-acids) that has been proven to inhibit biofilm formation of S. aureus. Indeed, RIP competes with RAP by phosphorylating TRAP, which leads to an inhibition of TRAP phosphorylation. This leads to the inhibition of RNAIII transcription and thus to the attenuation of virulence factor production, inhibition of cell-cell communication and decreased adhesion capacities (Figure 3) [16] [17].

Because we needed our peptide to be secreted by our biofilm, we targeted RIP to the periplasm of E. coli by using the Sec-dependent Type II secretion system. Our peptide is fused to an amino-terminal signal sequence, that is recognized by the chaperone SecB, then addressed to SecA and translocated across the inner membrane through the SecYEG complex. One advantage of this system is that the signal sequence gets cleaved during translocation through SecYEG. Several different signal sequences have been characterized (all formed of 18 to 30 amino acids) [18]. Following the advice of Dr. Jean-Michel Betton, Research Director in Structural Microbiology at the Institut Pasteur, we chose to try two different signal sequences to export our peptides to the periplasm, which he knew were efficient: MalE and DsbA. Once in the periplasm, due to the small size of RIP (7 amino acids), a leaky release through the outer membrane of the bacteria should allow us to obtain RIP in the medium.

To sum up, in the presence of S. aureus in the environment of our biofilm, our engineered bacteria secrete a small peptide, RIP, that competes with RAP and inhibits the formation of a pathogenic biofilm. Unlike common antibiotics, RIP inhibits cell-to-cell communication rather than killing pathogenic bacteria. Thanks to such an approach, we avoid the development of antibiotic resistance by pathogens and we force pathogens to remain in their planktonic stage, in which they stay susceptible to the host immune system. 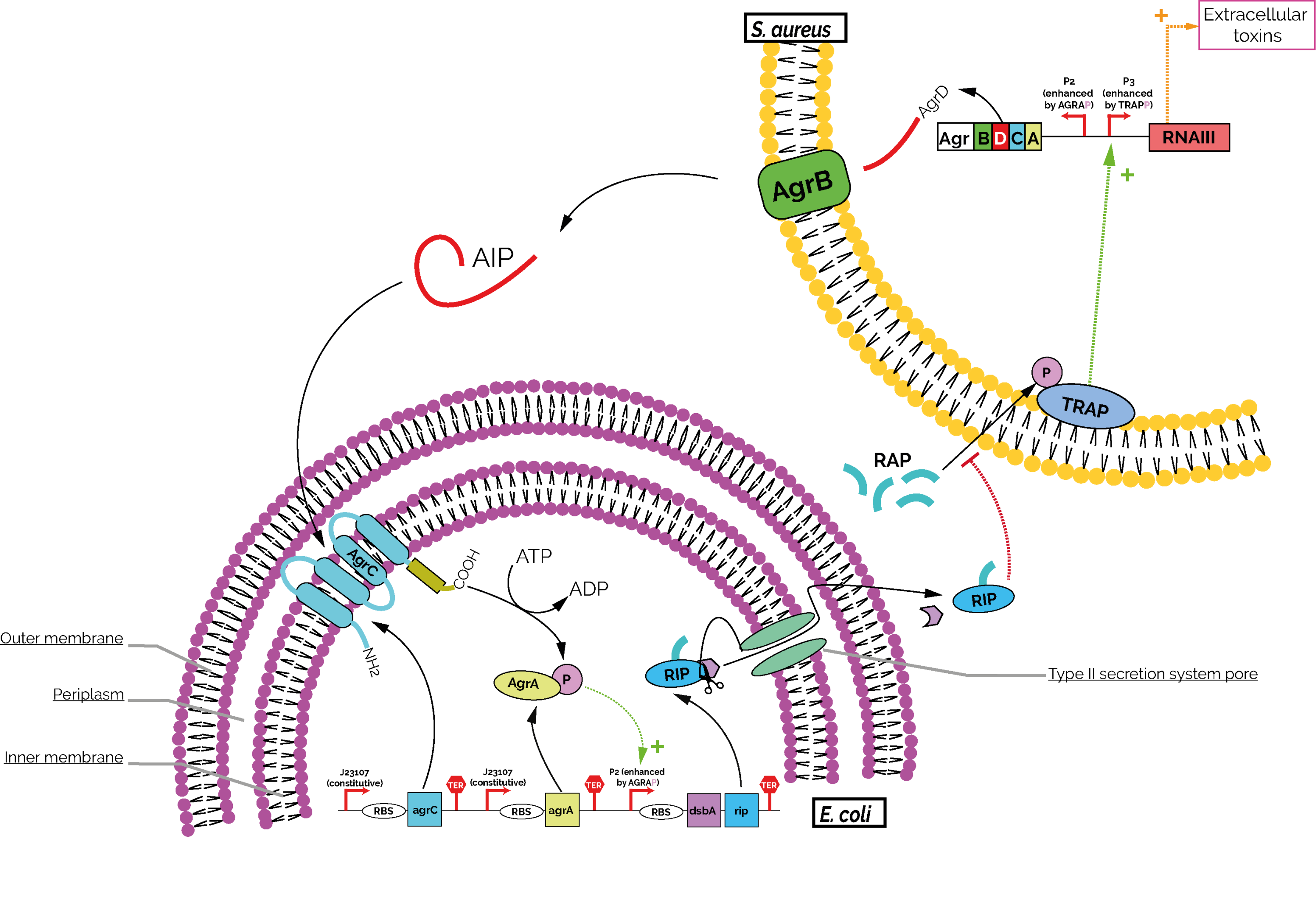 Figure 3: The detection proteins AgrC and AgrA are present in the engineered bacteria composing our biofilm, and thus, can detect the AIPs in the environment if S. aureus is present. AIPs will bind to AgrC, that will phosphorylate AgrA. This will induce the production and secretion of RIP, that inhibits S. aureus QS and thus, biofilm formation.

Visit the RESULTS page to get more information