Prostheses aim to enhance the quality of life, independence, mobility, and safety of amputees. The frequency of amputations worldwide has created an increased demand for improved prosthetic technologies. Within developing countries, the population with physical disabilities in need of a prosthesis is estimated at about 0.5%. There are currently almost 2 million people living with limb loss in the United States. In 2050, this amount will exceed 3 million people[1].

Over the past decade, many types of prostheses have been created. One of them is the myoelectric prosthesis, which captures the electromyographic (EMG) signal of residual limb muscle through surface electrodes on the skin. These kinds of robotic prostheses allow amputees to recover some autonomy and to accomplish simple everyday gestures. However, they are still limited by a number of controllable movements and by the lack of sensory feedback [1].

Today, the direct attachment of the prosthesis to the skeleton introduces the concept of osseointegration. This kind of prosthesis provides the patient with precise and reliable control of the new limb, regardless of the environmental conditions or the position. The opportunity to record and stimulate the neuromuscular system allows intuitive control and a better understanding of sensory perception [2].

The central nervous system (CNS), composed of the brain and the spinal cord, helps integrating, influencing and coordinating activities across the whole organism. The neural tissues bring information from one region of the body to another by sending electrical signals along the axon [3]. The efferent motor neurons of the peripheral nervous system (PNS) communicate with muscles and are under voluntary control. They go from the spinal cord to the arms, hands, legs, and feet and allow for nerve impulses to be transmitted from the CNS, leading to an action [3]. To increase the electrical signal speed, axons are surrounded by myelin, produced by another type of cells called Schwann cells. These cells twist around the axon and prevent the loss of the electrical signal[4]. After limb amputation, the main issue within the human-machine communication is due to the damage inflicted on the nerves. In fact, the electrical signal cannot be transmitted because peripheral nerve cells are no longer able to activate target muscles or relay sensory information from the limbs back to the brain.

The central idea of our project is to find a way to help the motor nerves of amputees grow back and connect to our interface. Literature studies led us to think of neurotrophins as the perfect molecules to start our research on. This family of peptides are growth factors specialized in the regulation of neuronal development, survival, plasticity and nervous system function[5].

The first neurotrophin to be discovered was the Nerve Growth Factor (NGF). It was described in 1952 by Rita Levy Montalcini and Viktor Hamburger [6]. Since then, many other neurotrophins have been discovered (BDNF, NT-3, NT-4, NT-6) [7] and much progress has been achieved towards understanding how they work. Yet, NGF is still considered a “prototype neurotrophin” [5] and is generally used as an example to describe the function of these peptides. For this reason, we chose to clone this polypeptide into our bacteria, creating the first component of the NeuronArch project.

The ambiguity between NGF and proNGF.

The mature-NGF protein results from the cleavage of β-NGF from a bigger protein called proNGF, which contains a pro-sequence and β-NGF (Figure 1). Both proNGF and β-NGF proteins are biologically active, and there is, to this date, some sort of uncertainty about the exact effect of proNGF.

Figure 1: Structure of the proNGF gene. Adapted from Ivanisevic, 2013.

Indeed, whereas there is no doubt that β-NGF is a neurotrophic factor, it has still not been determined exactly whether proNGF is a neurotrophic or an apoptotic factor [8]. Many articles are still in contradiction on this matter and part of the reason is linked with the biological pathways by which both proteins act on neurons. Two receptors are involved in their signaling: tropomyosin-related kinase A (TrkA) and the p75 neurotrophin receptor (p75NTR). The two proteins (proNGF and β-NGF) are able to bind both receptors, but it is globally accepted that β-NGF has a higher affinity for TrkA and proNGF has a higher affinity for p75NTR. Figure 2 shows a big picture of how the two signaling pathways are thought to work. 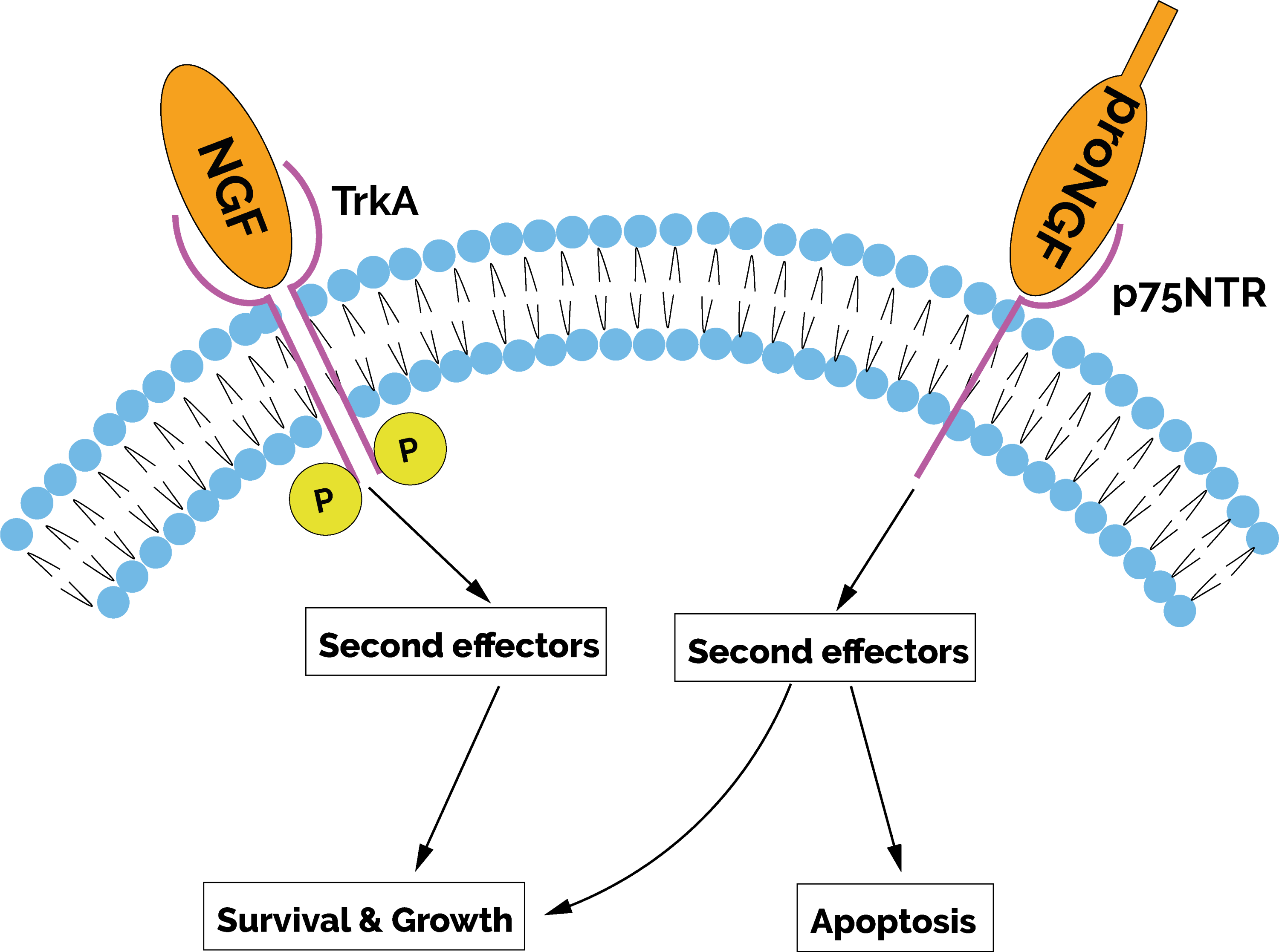 At this point, it might seem that choosing to clone β-NGF in the bacteria of our interface would be a better idea than proNGF. However, a few other information led us to think the other way around. First, despite the existing controversy, proNGF has been proven to exhibit a neurotrophic activity on some neural cells, even though it is not as strong as mature β-NGF (there is a fivefold activity difference) [10]. This neurotrophic activity is likely generated by a p75NTR-dependent mechanism and depends on the proportion of TrkA and p75NTR in the neural cells [11]. Moreover, TrkA is mainly expressed in three types of neurons: peripheral sensory neurons, sympathetic neurons and basal forebrain cholinergic neurons, whereas p75NTR is more evenly dispersed in different types of neurons [9]. Thus, expressing proNGF in our case seems like a good choice. Furthermore, several articles support the idea that the pro-sequence of NGF facilitates, and is even absolutely necessary, for the proper folding of the protein when it is recombinantly expressed in bacteria. This is particularly relevant as this protein contains three disulfide bonds and is particularly difficult to express using synthetic biology while keeping its function [12] [13].

Considering all this information, we finally chose to clone proNGF in our interface.

How to produce and secrete proNGF in Escherichia coli ? 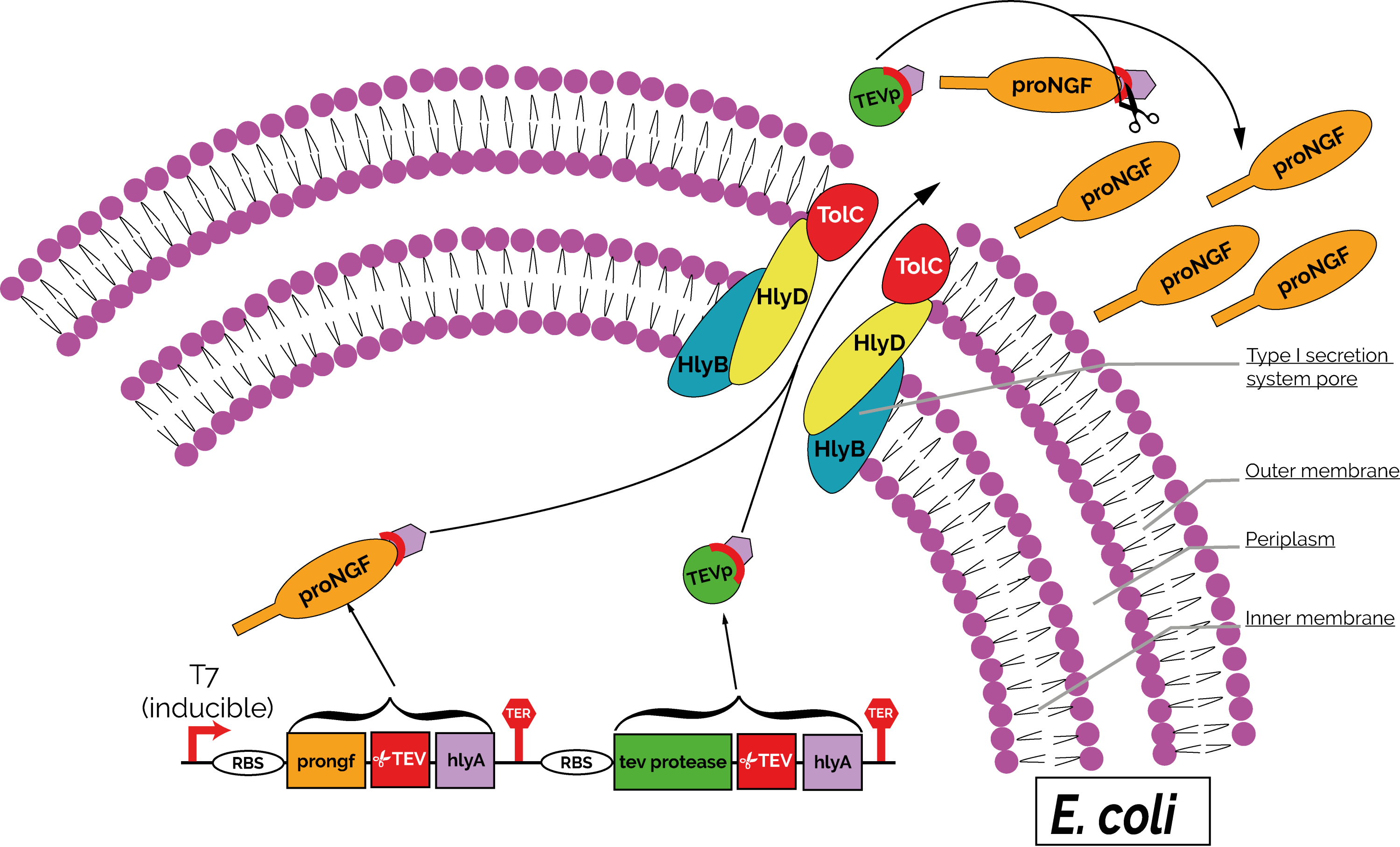 The composition of our final composite biobrick BBa_K2616000 is detailed in the PARTS submenu of this wiki.

Once exported from the cell, the TEV protease can cleave the proNGF from HlyA and free the pro-neurotrophin in the external medium.

Visit the RESULTS page to get more information