To inspire young students about science while teaching them about techniques that synthetic biologists use daily, beside delivering presentations, the Pitt iGEM team this year developed three unique games that can be reused in the future. These activities took higher level concepts and made them easier to understand yet still educational and engaging. Throughout the 2018 iGEM season, we played these games with students ranging from grades 6-12. These students came from various backgrounds including families of lower income, non-native speakers, or minimal science backgrounds. While the students enjoyed the competition and thrill of the games, they were also able to comprehend the core concepts of synthetic biology. The three games include two new games: CRISPR Spot the Difference and B.Y.O.B. (Build Your Own Bacterium), and a game developed by the Pitt iGEM 2017 team.

CRISPR-Cas9 is a new gene editing technology that can be used in a wide range of organisms from simple bacteria to mice to complex mammalian cells. What makes CRISPR so fascinating and useful to scientists as a genome editing tool is its specificity and efficiency. However, synthetic biologists must consider tradeoffs between these two factors when designing new systems. Scientists always want to minimize the mistakes (off-targets) that CRISPR sometimes makes to wrong sections of DNA [specificity], but increasing specificity sometimes slows down the editing rate [efficiency].

In this game, students take on the role of a Cas9 complex to try to catch all the mismatches on their handouts before the timer they chosen runs out. Since for each mismatch that is not recognized, a cash penalty will be taken away, the students need to consider the tradeoffs between how fast they want to go and how specific they can catch the mismatches. The game will go three rounds with the increasing of penalty, which represents the progressive trials from bacteria, animals, to humans and demonstrates the severity of off-target effects in more complex organisms. Lastly, students will be encouraged to recognize the correct match between sgRNA and DNA in real gene sequence. By playing this game, we hope to educate young students in a fun and unique way about how important trade-offs are with the CRISPR system. 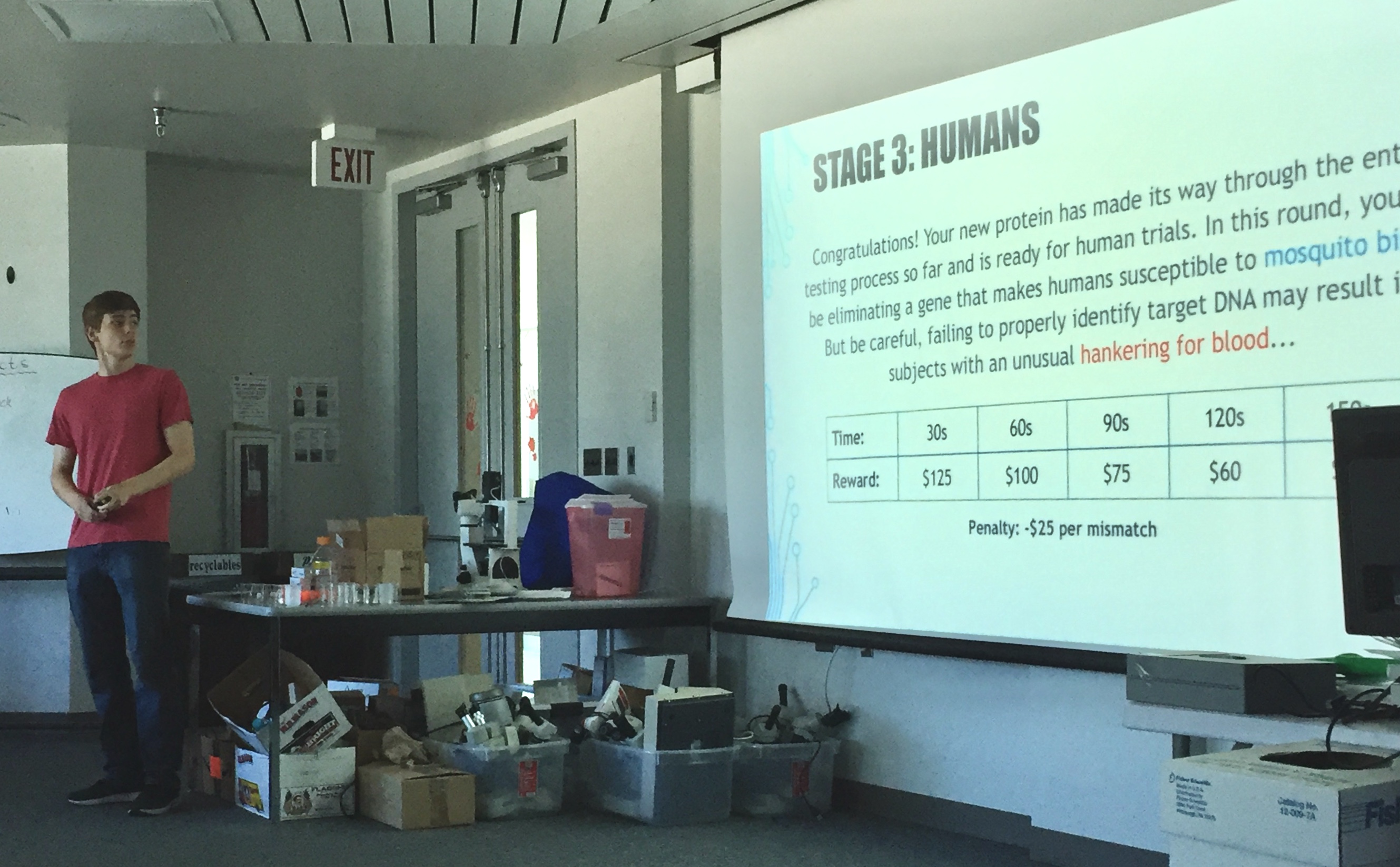 B.Y.O.B. (Build Your Own Bacterium)

Synthetic biology is the design and construction of new biological functions and systems for innovative purposes. Synthetic biologists try to design their systems modularly so that parts with different functions can be combined in unique ways. Parallels can be drawn between synthetic biology and electrical engineering: just like how parts such as a battery, switch, resistor, or capacitor are pieced together to form a functional circuit, biobrick parts are assembled to biological circuits to achieve desired inputs and outputs.

In this demo, a breadboard and Arduino were designed to look like a bacteria. Based on their experience of basic electrical circuits, students are encouraged to insert different parts, make their own circuits, and test how these components change their outputs. These different parts include a promoter (photoresistor, push button, and wires in a beaker of di water with an inducer (i.e. salt)), repressor (different level resistors), fluorescent protein (multicolored LEDs), and terminator (different resistors). 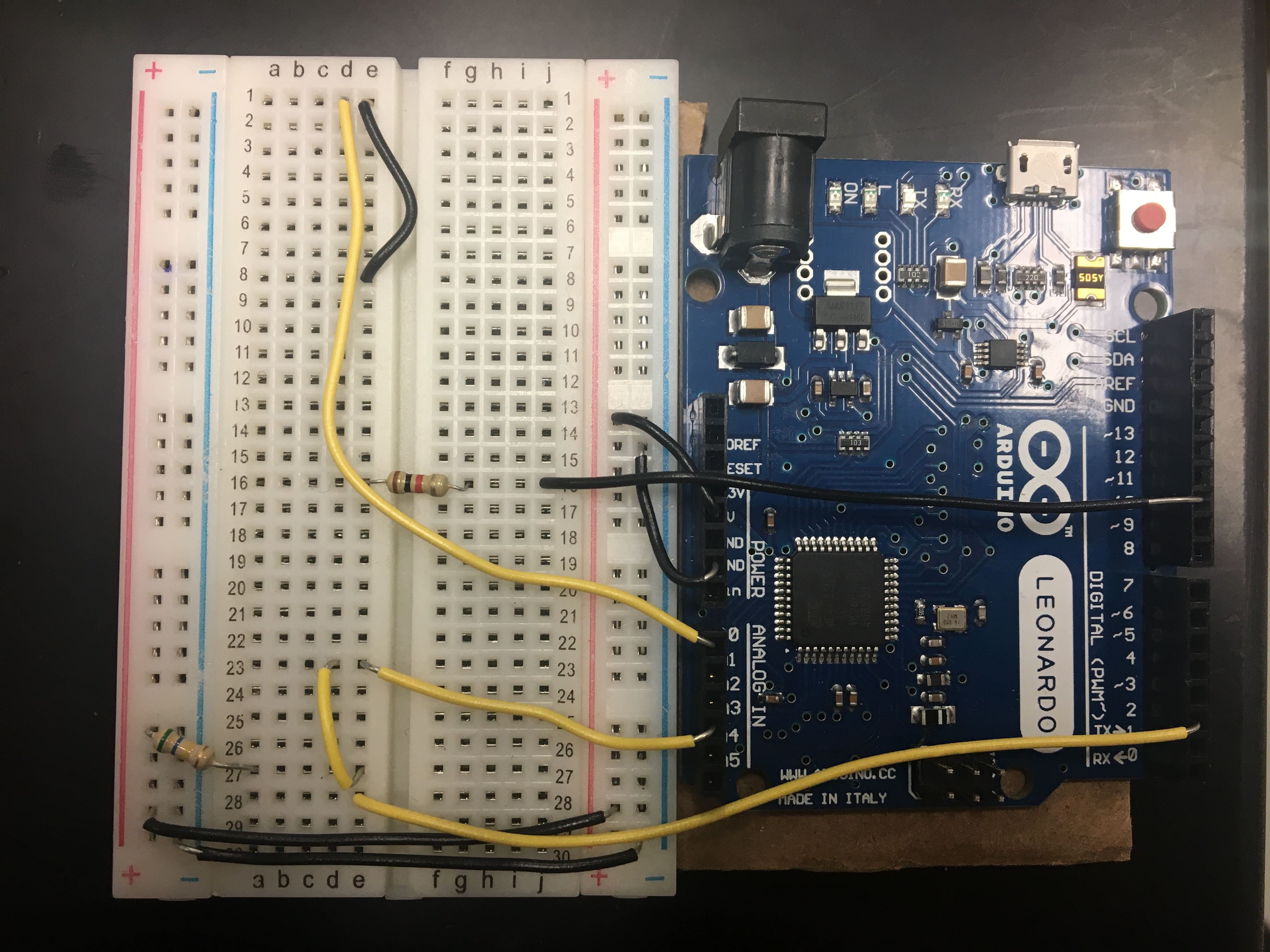 The breadboard and Arduino of B.Y.O.B. Demo. 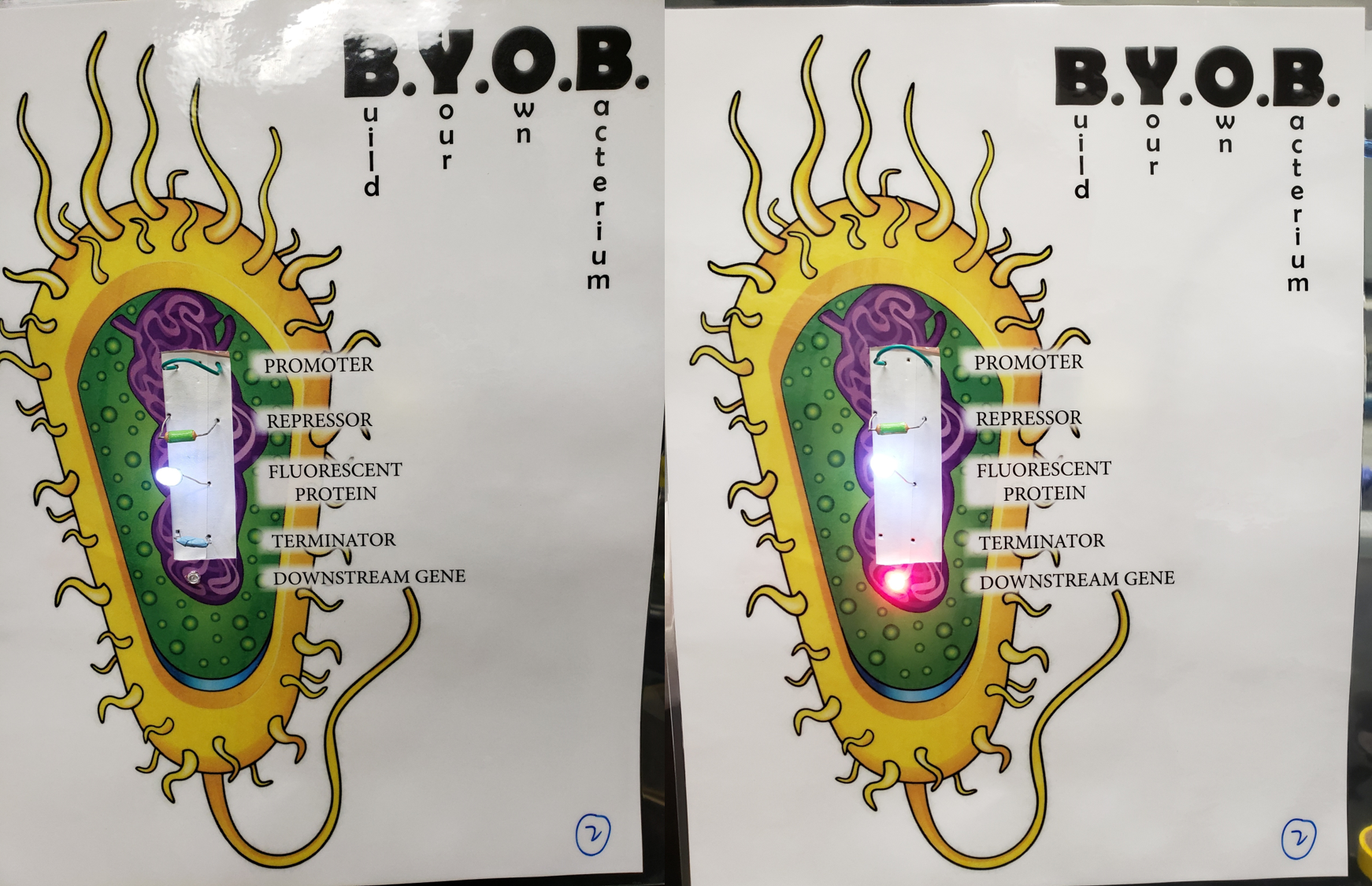 Removal of terminator leads to the continuous transcription of downstream gene.


Build Your Own Plasmid

Plasmids have crucial functions in bacteria to help them harsh environmental conditions. In this game, students are provided with a standard backbone and multiple functional genes. They can construct their own plasmids while they are not allowed to change the order of restriction enzyme sites on the backbone. After the construct of plasmids, rounds of selection process will be performed. This plasmid game was designed by the 2017 Pittsburgh iGEM team. However, this year we improved it by laminating each part to create an easier way of assembling the plasmids, while still maintain the functionality of the game. 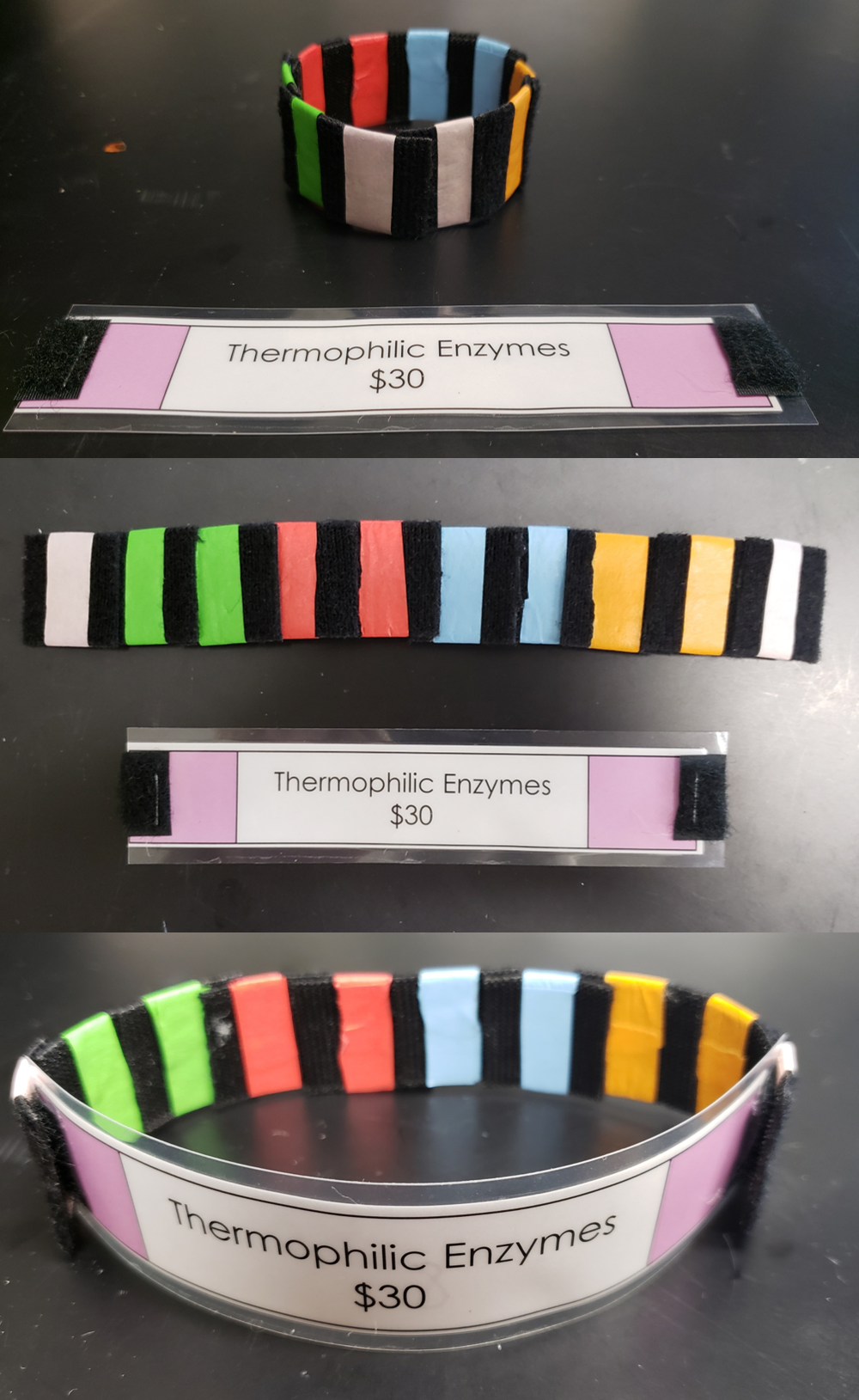 Build your own plasmid