Reliable and repeatable measurement which is a key component to synthetic biology is the aim of the iGEM InterLab Study. We took part in the 5th international interLab measurement study and the core question is:

“Can we reduce lab-to-lab variability in fluorescent measurements by normalizing to absolute cell count or colony-forming units (CFUs) instead of OD? ”

Prepare competent cells (Escherichia coli strain DH5α) and perform transformation according to the cell measurement protocol. Meanwhile, we followed the calibration protocol supplied by the iGEM HQ to generate OD600 reference point, particle standard curve and fluorescence standard curve to calibrate the plate reader (96 well plate) and then measured both the fluorescence and absorbance of our samples in 0-hour and 6-hour.

We used the setted protocol that we obtained so as to ensure everyone was doing correctly and repeatable. These can be found at this page.

We submitted the iGEM’s completed spreadsheet to the measurement committee before the deadline, and received confirmation that the results were shown here: 2018/7/30 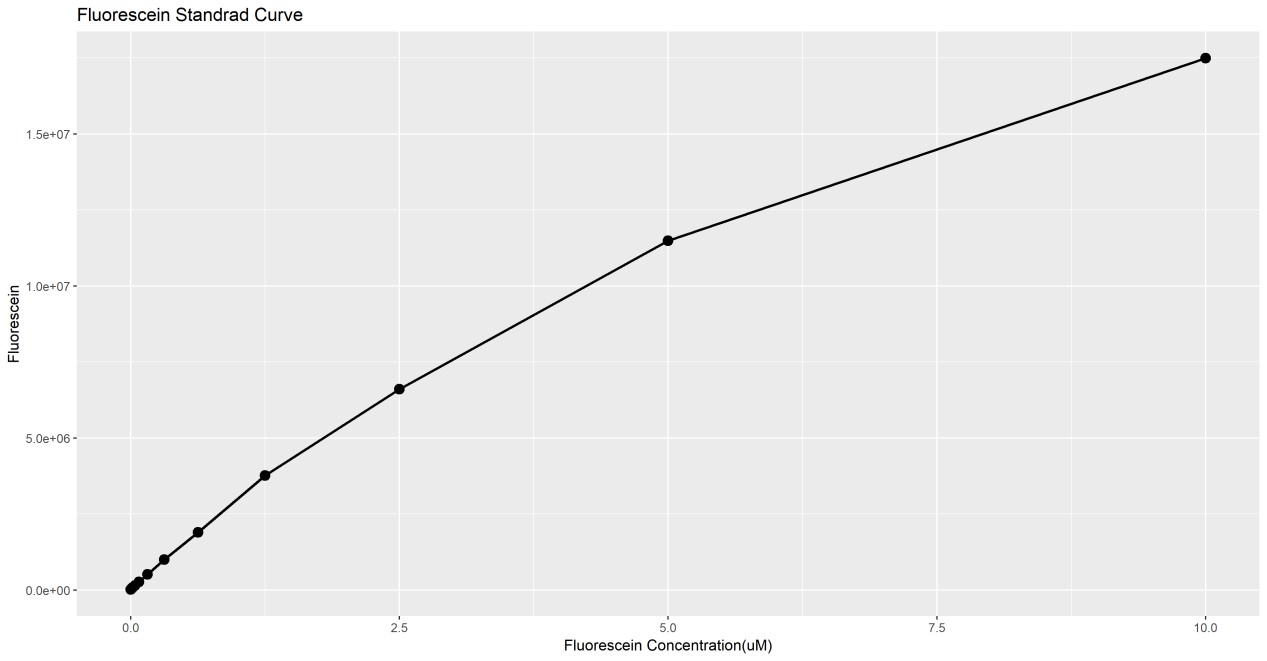 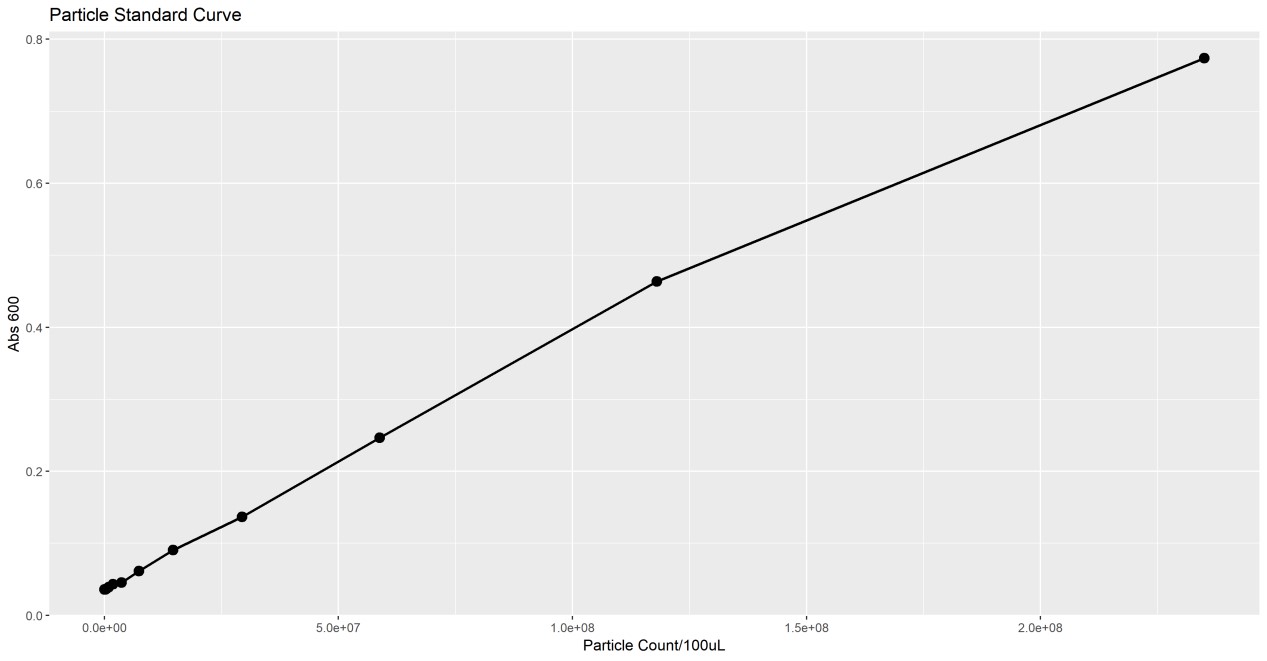 Our goal is to reduce lab-to-lab variations in fluorescent intensity measurements, in order to test the variation in our sample, we caculated coefficient of variation for both colony, and compared the CV value by using different normalization method (fluorescence per OD or fluorescence per particle) 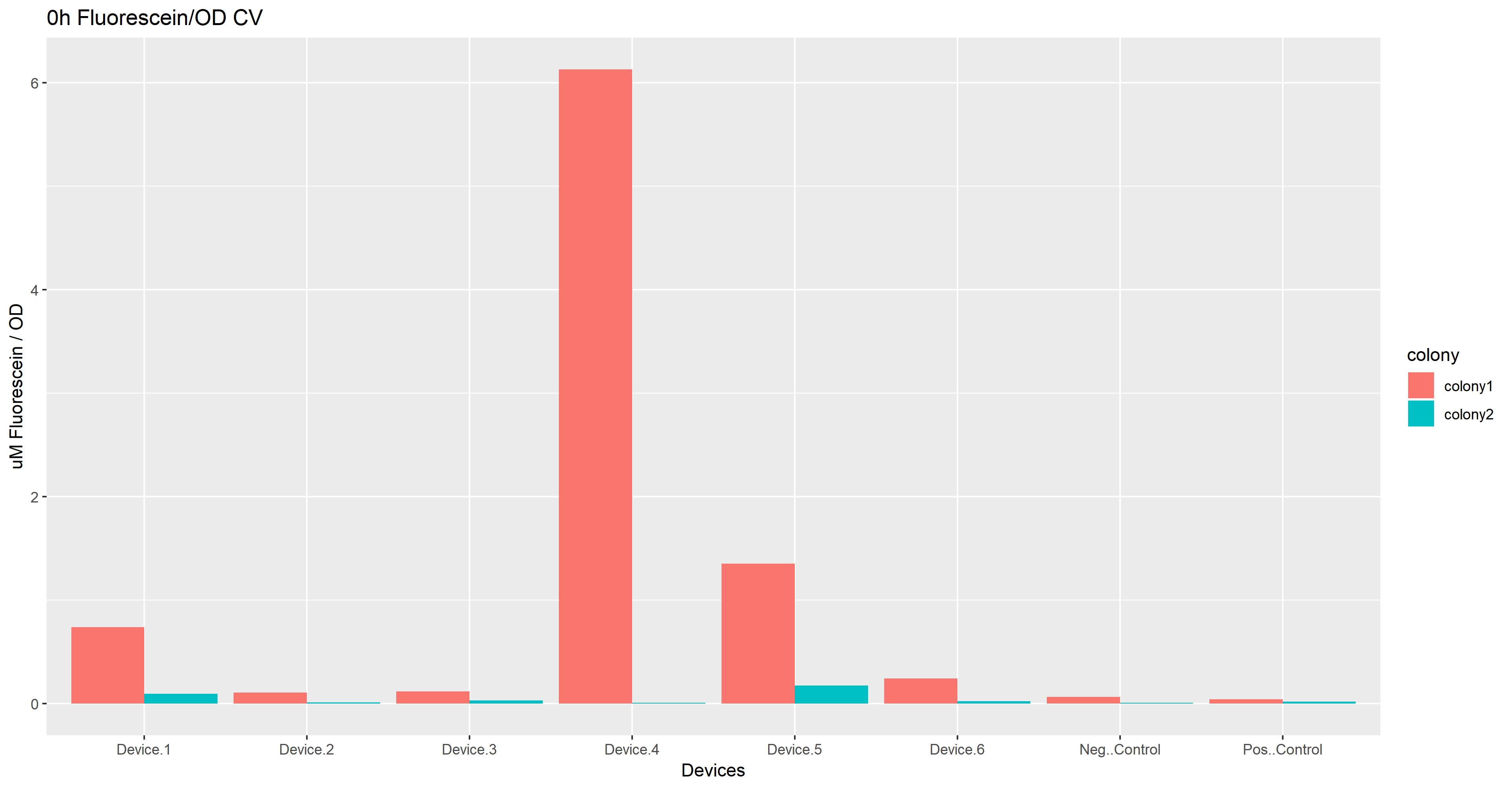 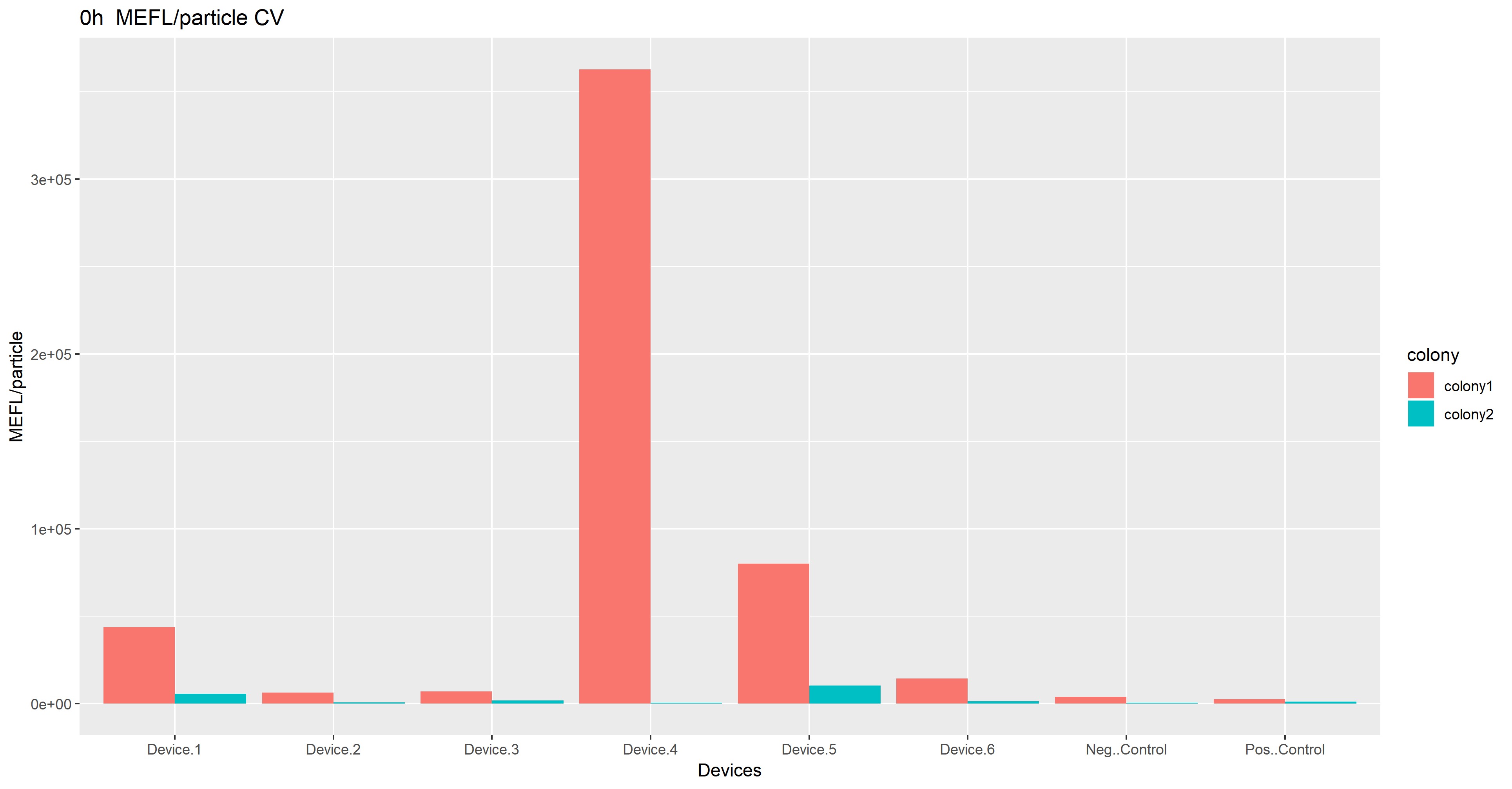 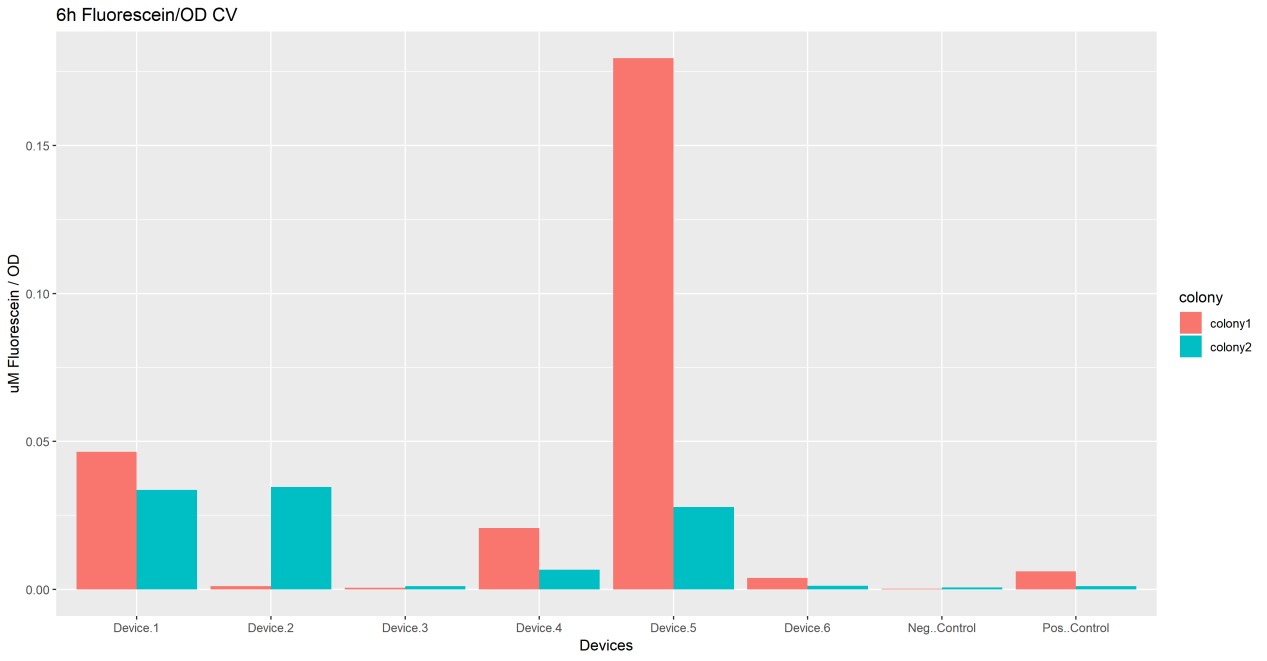 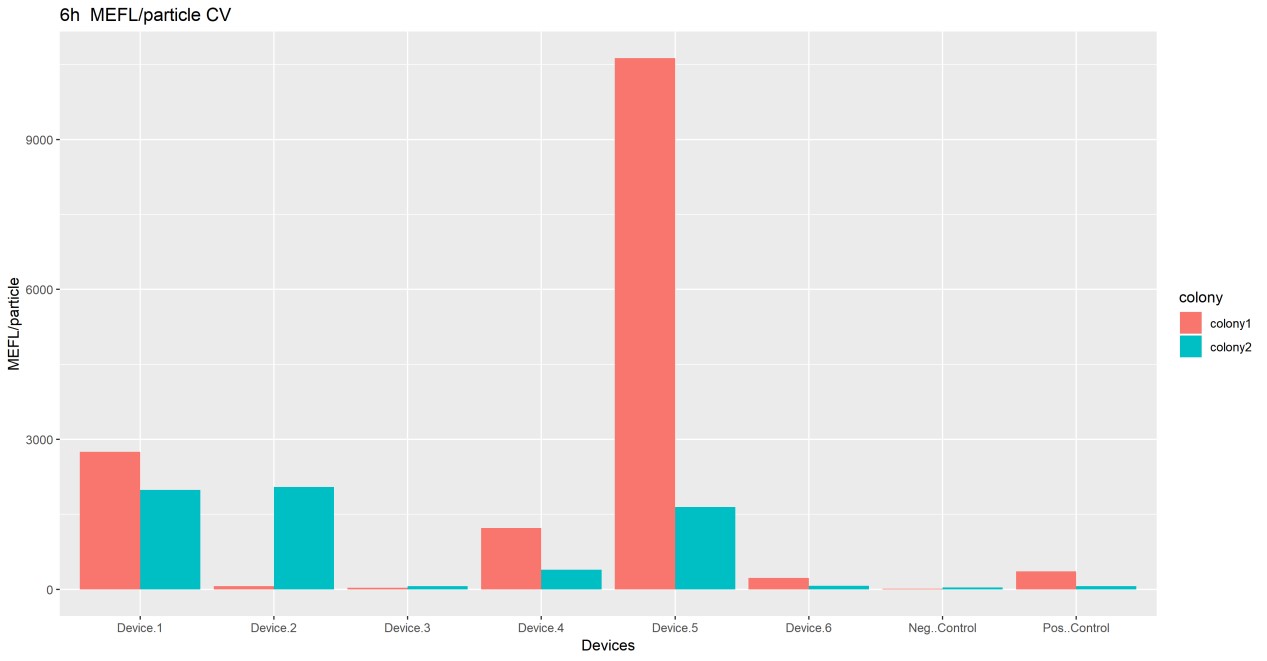 After 6 hr growth, we found that the variation of each type of cells (devices) is decreased, but the CV value of devices 4 and device5 are much higher than the others. The variation of fluorescence per OD is much smaller than fluorescence per particle. Furthermore, we also found that the data from colony 2’s is usually more steady compared with colony 1. To conveniently compare the normalized value with original value, we removed the data of devices 4 and device 5, and only compare to the 6-hour’s data of colony 2 . 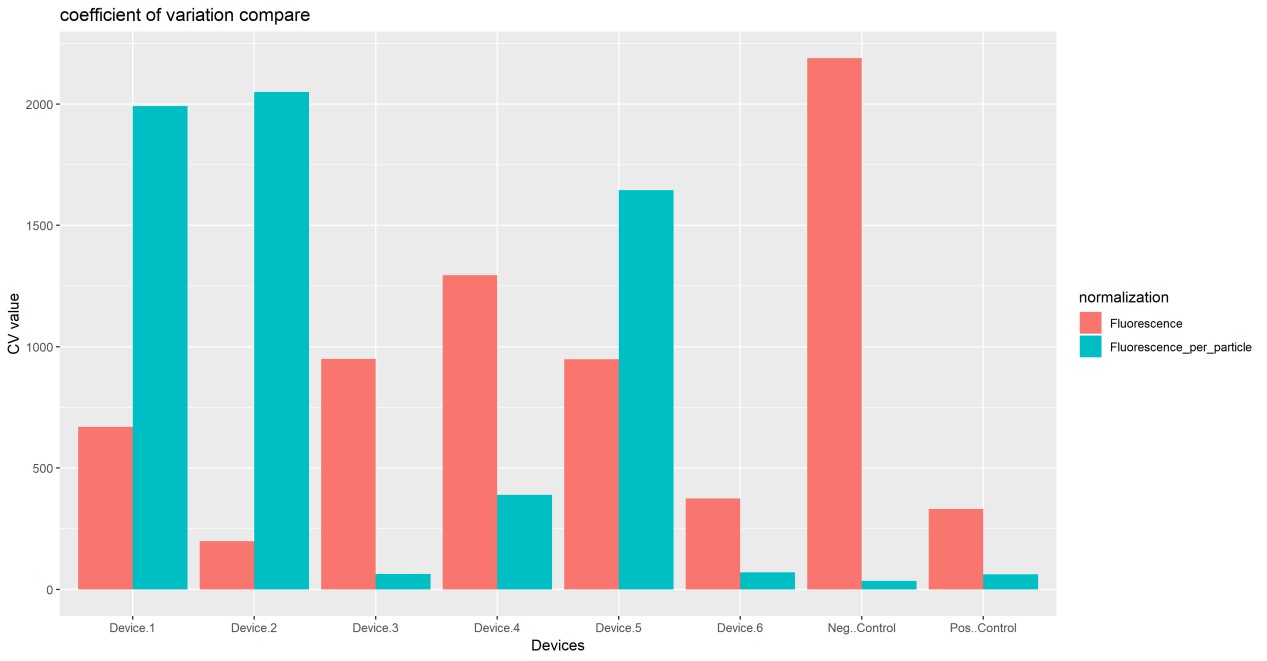 According to the graph, we found that fluorescence per particle could decrease the variation but it depending on the devices. It seemed that usage ofe OD value to normalize is still better than particle. But one thing need to be pointed out that too steady normalized value will lose sensitivity when test the influences of some factors. You can see this excel file to check our raw and manipulated data.