Dental Plaque is composed of food debris, exfoliated oral epithelial cells, saliva, and bacteria. Once formed, it adheres cohesively to teeth, corroding the mineral surface of the teeth, and eventually leads to a series of oral problems such as caries, periodontitis, and dental calculus. Through massive amount of research, SMS_Shenzhen discovers that the Streptococcus mutans in the oral cavity is the actually "culprit" that causes plaque formation.This bacterium uses dextran as the main nutrient to convert sucrose in food into plaque. So the team decides to trace back to the origin, using the techniques of synthetic biology to weaken the adhesion of dextran to teeth and inhibit the growth of Streptococcus mutans, to achieve our goal of eliminating plaque.

SMS_Shenzhen has found two kinds of enzymes——dextranase and exo-beta-D-fructosidase (referred as “FruA enzyme” in following content), which can be used to reduce dextran adhesion and inhibit Streptococcus mutans. Our team transfers the genes into the engineered bacteria, which are capable of producing dextranase and FruA enzymes, and ultimately use Lactococcus. latis to integrate our enzymes into our product design, which is dental plaque removal yogurt. We aim to eliminate dental plaque formation using a convenient applicable method.

Dental plaque is a biofilm or mass of bacteria that grows on surfaces within the mouth. It is a sticky colorless deposit at first; but when it forms tartar, it is often brown or pale yellow. Progression and build-up of dental plaque can give rise to tooth decay – the localized destruction of the tissues of the tooth by acid produced from the bacterial degradation of fermentable sugar – and periodontal problems such as gingivitis and periodontitis; hence it is important to disrupt bacterial metabolism process, and remove bacteria. Plaque control and removal can be achieved with correct daily or twice-daily tooth brushing and use of interdental aids such as dental floss and interdental brushes. Approximately 80-90% of the plaque’s weight is water, while 70% of the plaque’s dry weight is bacteria, and the remaining 30% consists of polysaccharides and glycoproteins.

Unlike other parts of the body, tooth surfaces are uniquely hard and nonshedding. Therefore, the warm and moist environment of the mouth and the presence of teeth create a suitable environment for the growth and development of dental plaque. The main ecological factors that contribute to plaque formation are pH, saliva, temperature, and redox reactions. The normal pH range of saliva is between 6 and 7, and plaque biofilm is known to flourish in a pH between 6.7 and 8.3. This indicates that the natural environment of the mouth provided by saliva is ideal for the growth of bacteria in the dental plaque. Saliva acts as a buffer, which helps to maintain the pH in the mouth between 6 and 7. In addition to buffering, saliva and gingival crevicular fluid contain primary nutrients including amino acids, proteins, and glycoproteins.

Dental plaque may lead to three possible consequences: caries，gingivitis, and periodontitis. Dental caries is an infectious disease caused primarily by Streptococcus mutans, characterized by acid demineralization of the enamel, which can progress to further breakdown inner dental tissue (dentin). The bacterial community mainly consists of acidogenic and acid-tolerating species (e.g. Streptococci.mutans and lactobacilli), while other species with relevant characteristics may also be involved. Gingivitis is an inflammatory lesion, mediated by host-parasite interactions that remain localized to the gingival tissue. It is caused by plaque building up around the gingival tissues. Without proper treatment, gingivitis can further develop into periodontitis.

Studies have found that Streptococcus mutans in the mouth is actually the "culprit" of plaque formation, which uses dextran as the main nutrient to convert sucrose in food into plaque.so our iGEM team decided to trace back the origin, using the technique of synthetic biology technology to weaken the adhesion of dextran on the teeth and inhibit the growth of Streptococcus mutans, so as to achieve our purpose of eliminating dental bacteria. 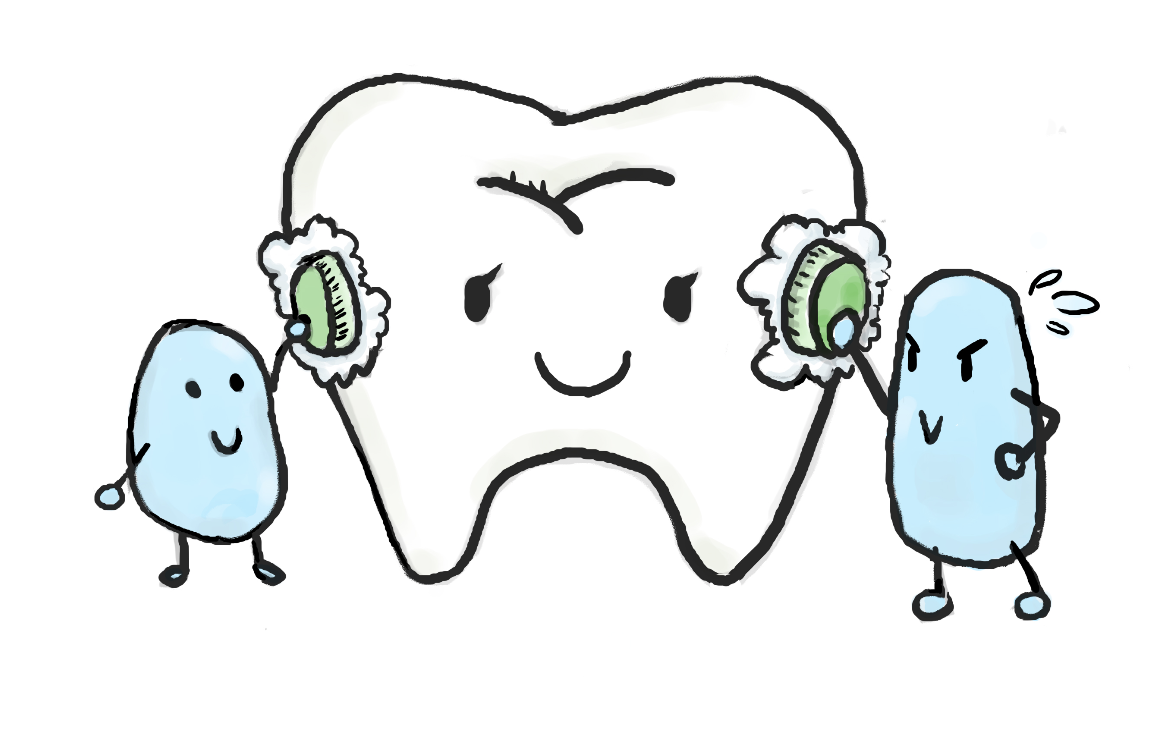 Our initial idea is to embed the two sequences of our FruA and dextran enzymes into the E. coli plasmid, plus the constitutive promoter, and the RBS and terminator to form two that can work in E. coli. Plasmid.Although E. coli produces protein with high efficiency, this kind of bacteria is inedible, so we alter our engineering bacteria to probiotic lactic acid bacteria, which is esculent. After choosing food leveled Lactococcus lactis as our engineering bacteria, which is also the most mature strain of genetic engineering technology in lactic acid bacteria, we constructed a L. lactis plasmid and expressed these two enzymes in lactic acid bacteria. Eventually, we will make it in the form of yogurt to achieve productization.

Before L. lactis enter the oral cavity through yogurt, we use the Nisin induction system to lyse them and release dextranase and FruA enzymes to function precisely in the oral cavity. Then, using the yogurt which made by the modified L.lactis, and relying on the adhesion of yogurt to the teeth, we can successfully attach the enzymes to the teeth, eventually eliminating dental plaque.

For more information about our project's design, please click here for detailed information.