Our iGEM team was inspired by Stanford Byers Center for Biodesign, an organization that leads in medical device design. Their biodesign innovation process was created to ensure that devices are created to address real, observed needs. We decided to adapt their process for synthetic biology and use it to identify and develop our project idea.

We began by hosting a biodesign workshop to attract new members and introduce them to the needs finding process. Ross Venook, the director of engineering at Stanford Biodesign, helped us put together a presentation and set of activities to lead participants through the fundamentals of biodesign.

The workshop was also an introduction for the independent study that we ran in winter, in which students applied the biodesign principles to find needs that might be addressed with synthetic biology. Kara Rogers, a lecturer in the bioengineering department, worked with us to create curricular materials and teach the course. The materials and student work for the independent study can be viewed here.

In spring, our independent study reduced to the students who would be participating on the team over the summer. We started by reviewing the previous quarter’s work and choosing one need area for our focus. We were most interested in needs related to the microbiome, but talking to grad students who study mammalian gut microbiomes made us realize that working with anaerobic bacteria is difficult without a specialized growth chamber. To avoid those challenges, we shifted our focus to plant microbiomes. Cannabis was a plant of particular interest to our group, so we decided to look for needs relating to the cannabis microbiome. 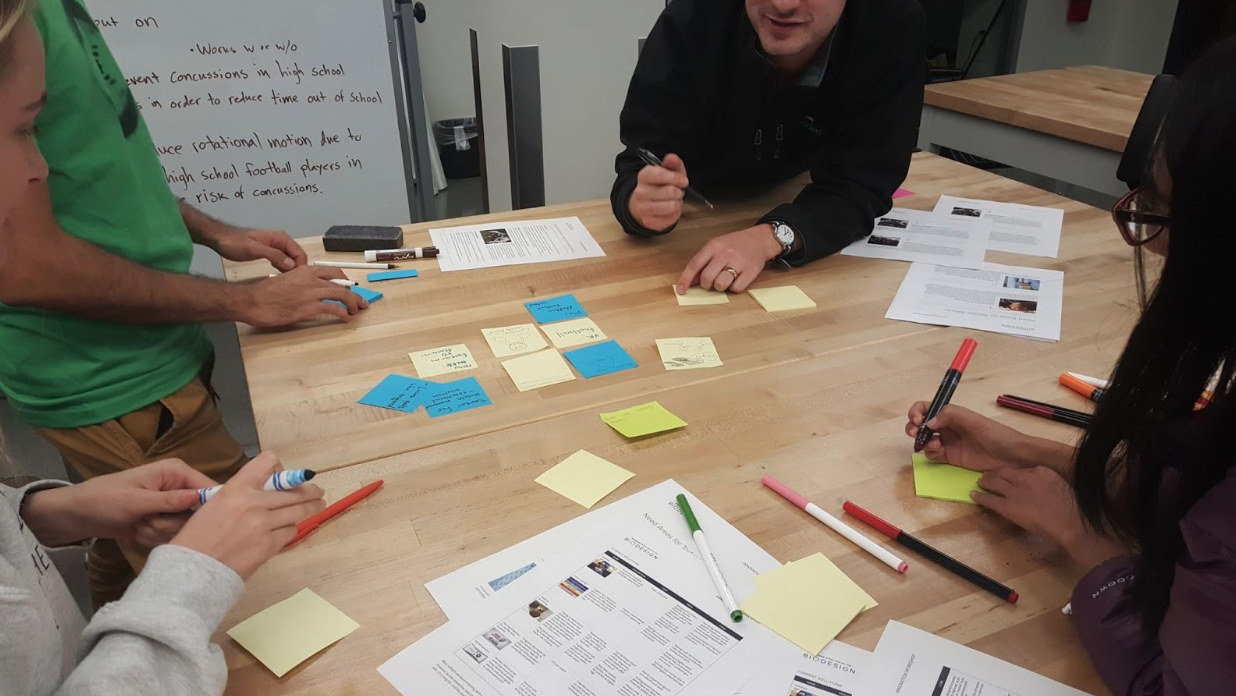 In the early stages of our research, we conducted interviews with people whose work was relevant to our project. We spoke to cannabis growers and a consultant for cannabis businesses; we also talked with the founder of Confident Cannabis, a company that provides software for cannabis testing labs. One interesting problem was aflatoxin contamination, which is caused by a fungus called aspergillus flavus. It is very common for aspergillus to grow on leaves, but there is currently no good way to distinguish benign strains from strains that produce aflatoxin. Aflatoxin is only tested for when the harvest is being processed, and if it is detected, then that batch must be destroyed. Based on this need, we decided to develop a way to detect aflatoxin on living cannabis plants so that growers could remedy the problem by removing contaminated plants before losing their whole harvest.

We started our research by looking at previous iGEM projects relating to aflatoxin detection. We were particularly struck by the work of the 2017 Tsinghua team, which adapted a yeast two-hybrid system for small molecule detection instead of protein screening. Initially, our plan was to port their system from yeast into bacillus subtilis, a non-pathogenic bacteria that naturally colonizes cannabis leaves, so that our detection system could live on the leaves of plants as they grow and produce an easily visible reporter in response to aflatoxin.

However, we soon realized that this was not a realistic idea. After getting more information from the 2017 Tsinghua team and consulting with grad student mentors, we realized that the original yeast two-hybrid for aflatoxin detection was not as successful as we had thought, and was unlikely to be successful. Instead, we decided to expand upon the system and develop a three-pronged modular approach to detecting not only small molecules like aflatoxin, but also DNA and protein. We were excited by this system because it allowed us to initiate transcription in response to detection, opening the possibility of producing therapeutic proteins in the presence of specific signal molecules. To better understand the uses for this new technology, we talked with our potential users. We met several times with a researcher and consultant working on early detection of liver cancer; he helped clarify potential detection targets and the need for improved diagnostic tools. We also talked with a senior scientist at New England Biolabs about potential use cases in strain engineering. These conversations gave us the confidence to go ahead with our project and implement our ideas, knowing that they were still addressing a need.

At the end of the summer, we presented our work at the Stanford Bioengineering Research Experience for Undergraduates poster session and engaged with our fellow scientists. We met grad students who had participated in iGEM in college and were excited to hear about our team, and we also met with Ed van Bruggen from University of Washington. He visited our lab and we discussed opportunities for collaboration.