In science, it is of great importance to generate reproducible and reliable data. However, the reproduction of experiments in other laboratories, especially in biology, is often difficult. Therefore, the Measurement committee of the InterLab study designed a robust protocol for measuring the fluorescence of green fluorescence protein (GFP). By comparing results from labs all over the world following the same protocol, advances towards making biology a redictable and standardized science will be possible.

The aim of these experiments was to measure GFP fluorescence and OD600 of E. coli cells transformed with different constructs.

All measurements were performed with a BioTek Synergy 2 plate reader with a 96-well black flat bottom plate with clear bottom. 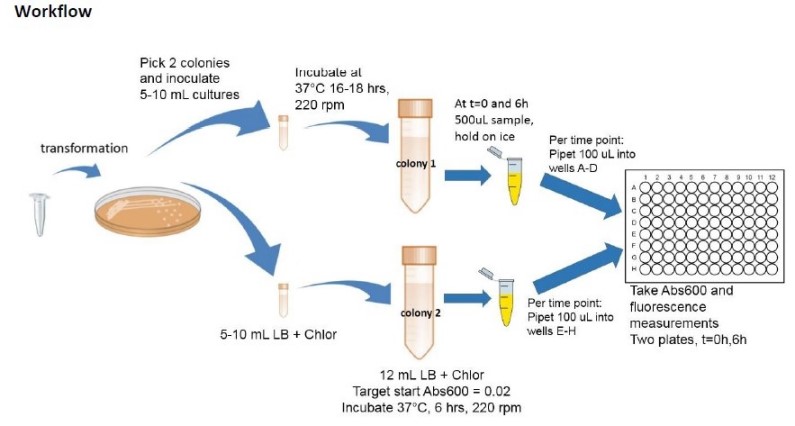 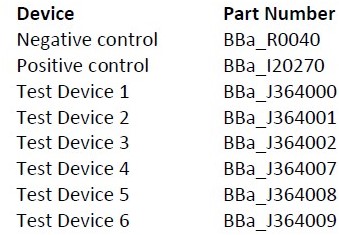 To estimate the scaling factor for calculating the OD600 from the Absorption 600 nm, 100µL of LUDOX CL-X (45% colloidal silica suspension) and 100 µL of ddH2O (as blank) were added to the plate and measured. 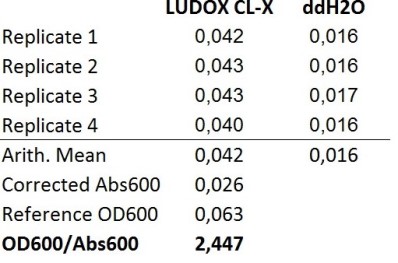 This particle standard curve can be used to convert Abs600 into an estimated number of cells. To get the curve, a dilution series of monodisperse silica microspheres is measured at Abs600 in the plate reader. 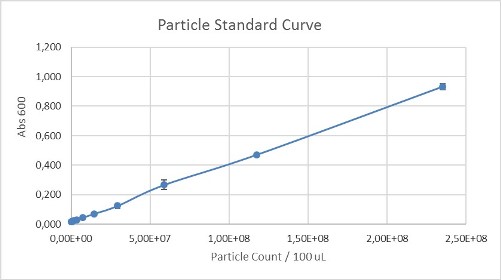 It’s necessary to create a standard fluorescence curve to compare fluorescence output of the test devices between the teams. To generate the standard curve with fluorescein, a dilution series was measured at 528 nm (excitation 485 nm). The excitation and emission spectrum of fluorescein has a similar range and is therefore a replacement for GFP. Furthermore GFP is expensive to purify and has a worse stability than fluorescein. 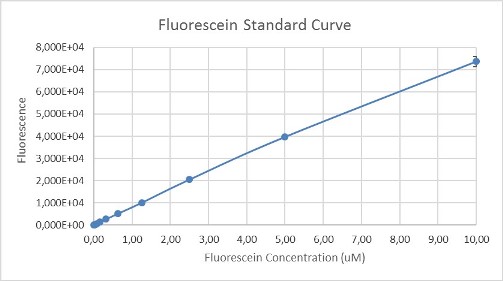 E. coli K12 DH5a was transformed with six different constructs plus one positive and one negative control. For further measurements 2 transformed colonies of each construct were picked. 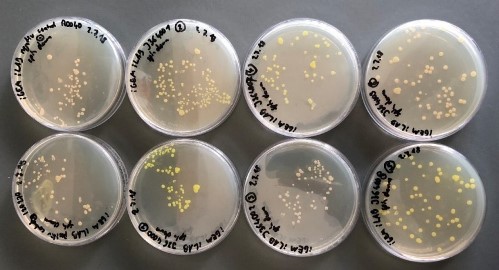 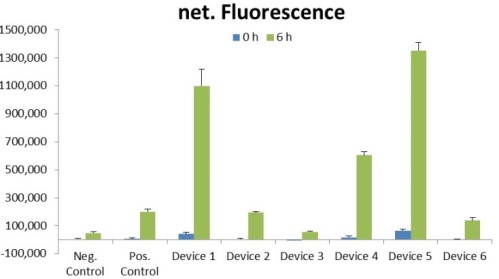 We measured the fluorescence (excitation 485 nm, emission 528 nm) of the eight different constructs at 0 h and 6 h of cultivation. All cultures were inoculated to an OD600 of 0.02 and all of them grew to an OD600 of 0.3 on average.

The figure shows differences in fluorescence between the devices at 6 h, likely because of varying expression levels of the protein. This might be caused by different promotors of the devices. Devices 1, 4 and 5 show much higher fluorescence compared to the positive control and the other devices, indicating a stronger promotor activity.

To relate the OD600 with the number of cells, a dilution series of a cell culture (pos. and neg. control) with an OD600 of 0.1 was prepared and plated out. Afterwards, the CFU were counted and the CFU ⁄ mL in the starting sample (OD600 = 0.1) was calculated.