From the very beginning of our adventure, our project was focused on two main topics: the devastating African epidemics and the Antibiotic Resistance! Two different problems, but one common enemy: bacteria! And our project aimed at finding a flexible and dynamic tool that could help fight both of them!
African epidemics are a major problems of nowadays world: lack of resources and poor hygienic conditions cause humanitarian disasters! In most of cases the problem would be easy to solve, but poverty and bad organization empeach to improve the situation. We want to find an affordable and effective solution to fight those humanitarian crises!
On the other side we have antibiotic resistance, a so-called "western problem"! Antibiotics are drugs which serve to fight against the infections due to bacteria: urinary infections, blood-poisoning, sexually transmitted diseases, etc. It is one of the most important discoveries of the medicine which saved and which still saves millions of lives every year, but their efficiency is threatened because bacteria can adapt themselves and resist the treatment. Antibiotics kill bacteria, or block their proliferation. The resistant bacteria became insensible in this drug. We speak then about resistance to antibiotics.
The remarkable efficiency of antibiotics motivated their use massive and repeated in human and animal health. It created a pressure of selection on the bacterial populations, by a similar phenomenon in the "natural selection of the species" described by Darwin, modifying the bacterial ecology.
The emergence of multiresistant bacteria in the middle of care is particularly worrisome as this new Australian study published in Nature Microbiology.
If the emergence of these resistances was countered at first by the development of new antibiotics, the breathlessness of the search and the decrease of the number of new available molecules threaten our armament in the face of these bacteria today. Before 2050, the resistant infections in drugs will kill more people than the cancer unless measures are taken to fight against the problem. 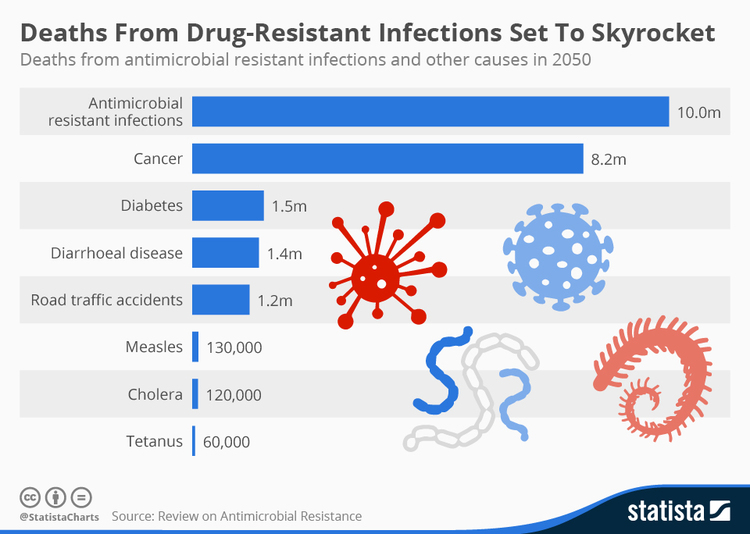