To validate the utility of JAWS for generating aptazymes sequences from the DNAzyme HRP mimicking and an aptamer for any other molecule, the sequence of an aptamer for AMP was introduced into the program, with the purpose of contrasting the catalytic activity of this aptazyme to the catalytic activity of an aptazyme that has already been characterized and tested in the literature and also by our team last year (APTZ_AMP_P) [1].

The sequence which its free energy difference had the highest value among all of the sequences given by the software was chosen (first sequence of Annex 1, notebook), because this difference consists in the difference of energies between the inactive and active state, so it is the sequence that has the least probability to move from an inactive state to an active state arbitrarily, avoiding false positives.

In addition, since the software delivers sequences with two DNAzymes, one on each flank of the sequence and adjacent to the generated linkers (because the software was designed this way, see Heidelberg 2015 project for more information), the sequences chosen to synthesize and subsequently carry out the enzymatic tests were chosen as delivered by the program (raw) and truncated, with the DNAzyme of the 3 'flank excised based on the configuration of the aptazyme APTZ_AMP_P.

The same procedure was done for DNAzyme HRP mimicking and aptamers specific for saxitoxin (APT_STX) and oxadaic acid (APT_OX) described in the literature [2][3]. All the sequences extracted from the literature and the ones obtained with JAWS are described in Annex 1 (notebook).

An experiment was carried out to evaluate if the aptazymes created by JAWS presented a dose-dependent activity for the ligand. Reactions were performed to evaluate the catalytic activity of 3 aptazymes of AMP: the already characterized aptazyme (APTZ_AMP_P) on which there is already evidence of a dose dependence of the ligand, an aptazyme obtained by the JAWS program that has 2 DNAzymes, one in the 5 'end and another at the 3' end of the sequence (APTZ_AMP_J), and the same aptazyme obtained by JAWS but with one of the DNAzymes cut out from the sequence, located at 3 '(APTZ_AMP_JC). It was decided to cut the DNAzyme from this end to emulate the configuration of the aptazyme characterized in the literature.

The assays were performed in Flat-bottomed 96-well plates at different concentrations of triplicate AMP for each sequence and included a positive control; a triplicate of DNAzyme. The experimental scheme is presented in figure 1. Table I (notebook) shows the final concentration of each reagent in 100 μL and the volume in μL. 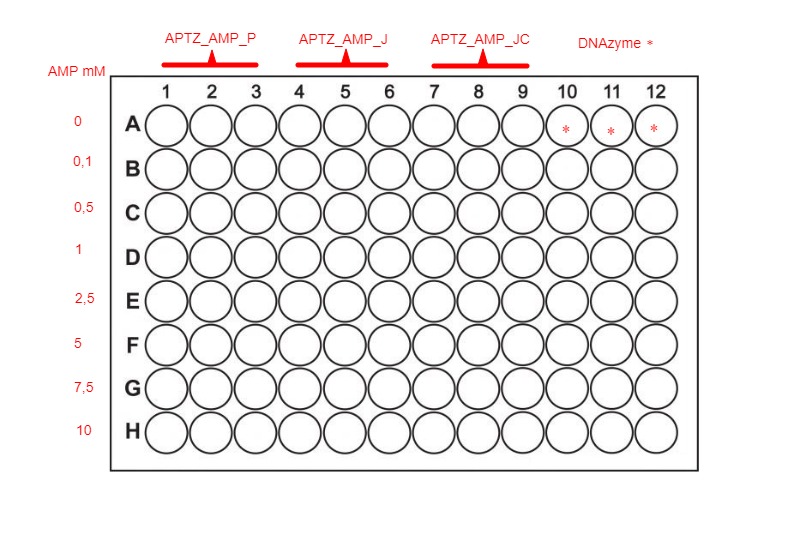 Figure 1. Scheme of the well-plate for the AMP aptazymes assay.


Here, the sequences worked in addition to the APTZ_AMP_P are presented:

Results of each tests are presented in figures 2, 3 and 4 for aptazymes “APTZ_AMP_P”, “APTZ_AMP_J” and “APTZ_AMP_JC” respectively, where the absorbance values ​​have been plotted as function of time with duplicate for the first aptazyme and triplicated for the last two. 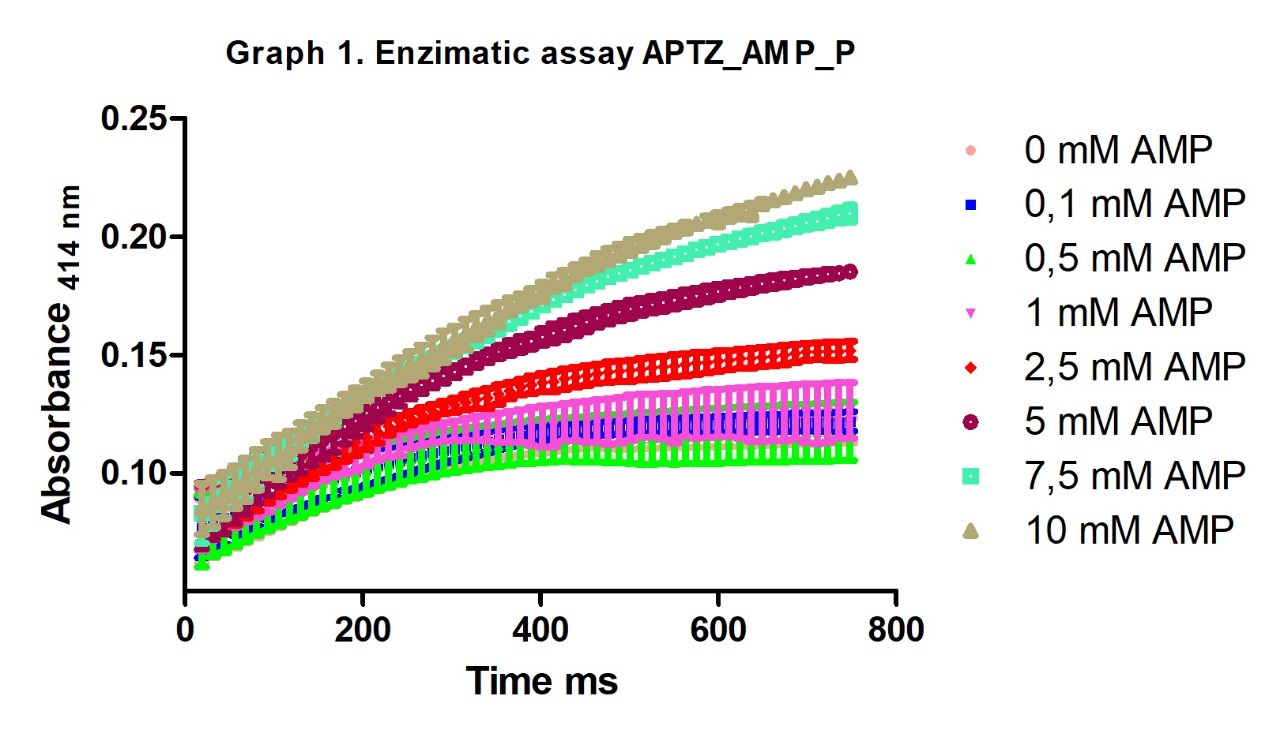 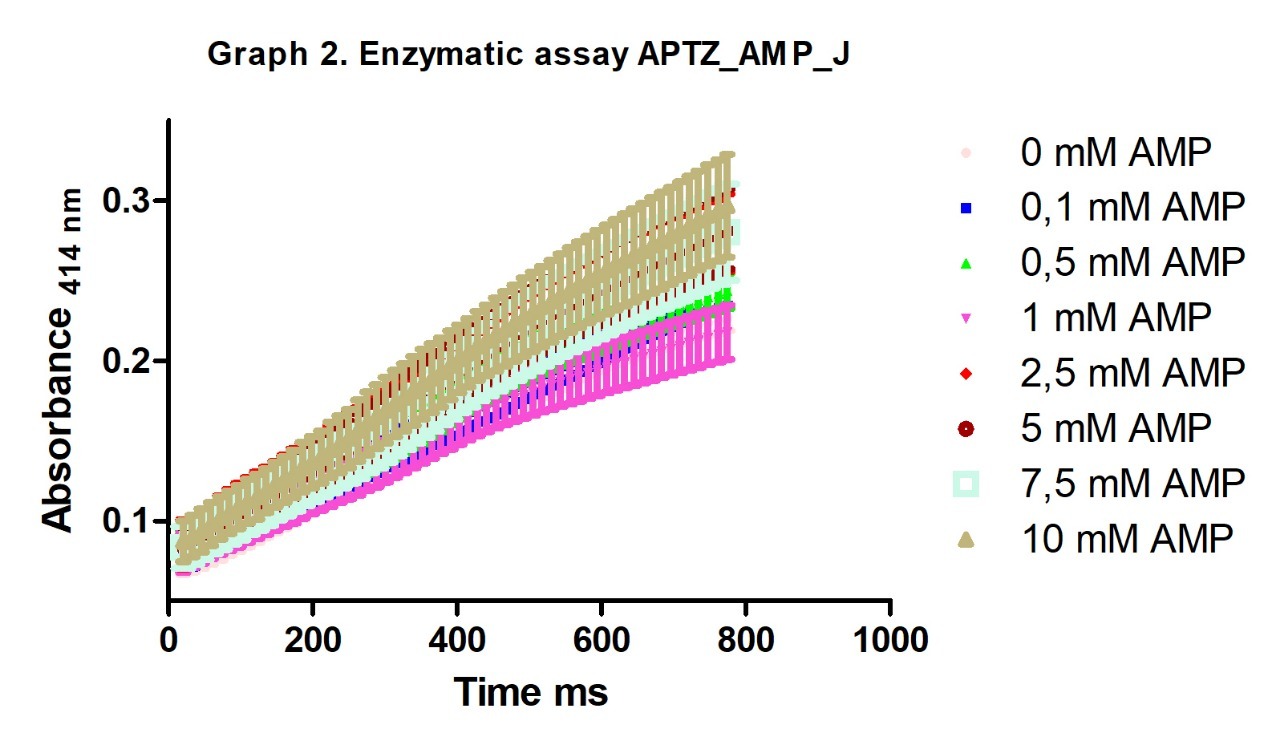 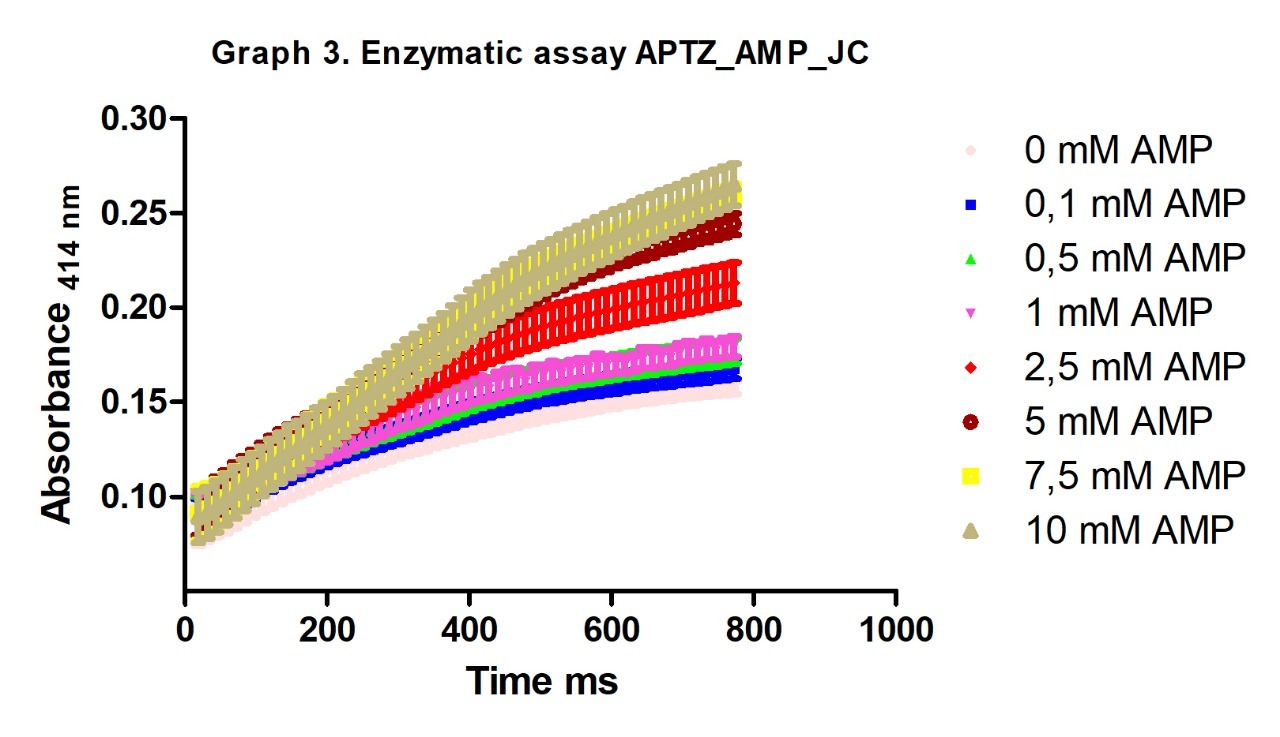 
Since the results of enzymatic assays with AMP aptazymes showed that the JAWS program generates sequences that can be efficient to detect ligands in a dose-dependent manner giving a colorimetric response when the sequences contain only one DNAzyme (APTZ_AMP_JC), they were sent to synthesize the following Aptazymes sequences:


Okadaic acid Aptazyme (the sequences of this last toxin were not tested so they will not be included in this record).

The tests were carried out with the 3 aptazymes of STX sent to be synthesized in a flat-bottomed 96-well plate. 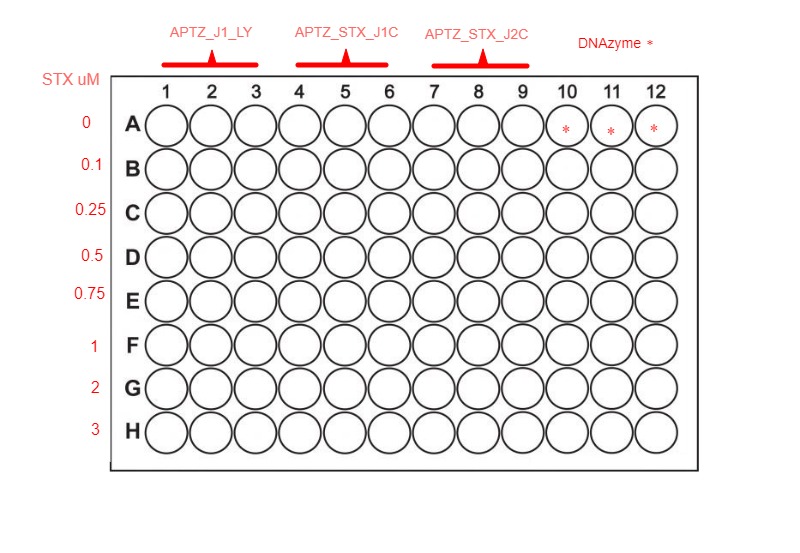 Figure 5. Scheme of the well-plate for the STX aptazymes assay.

Here are the results: 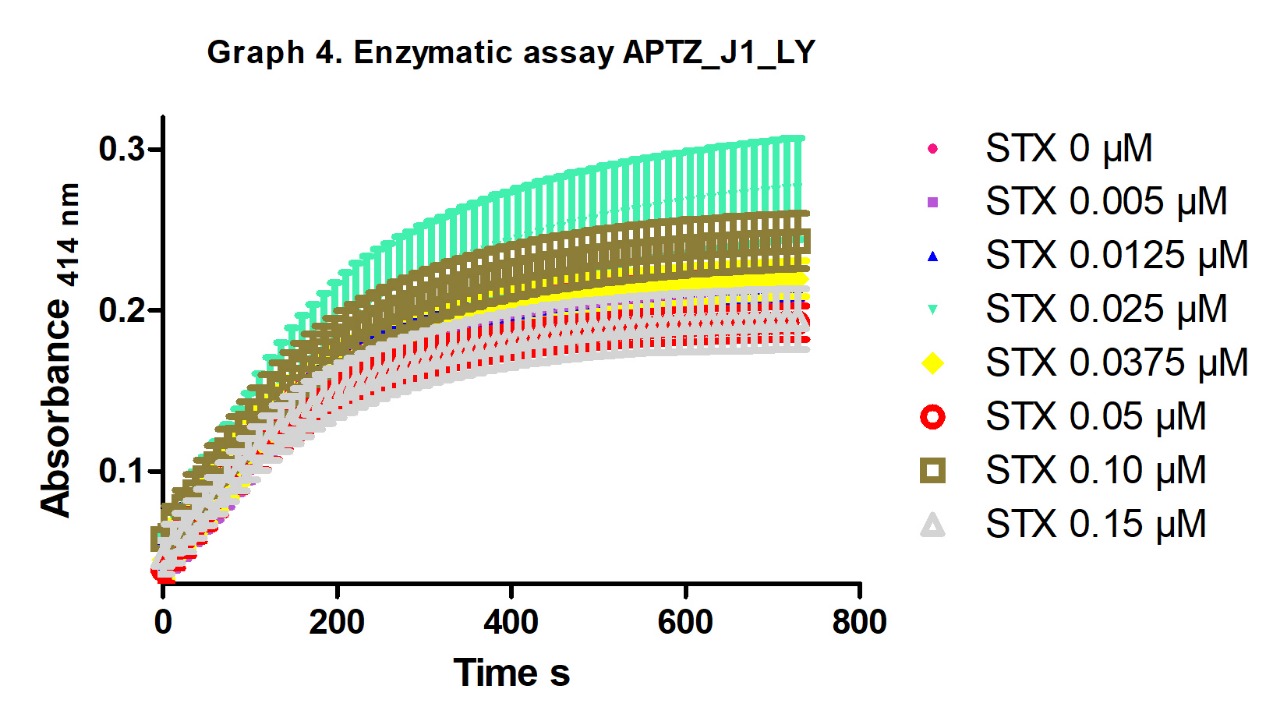 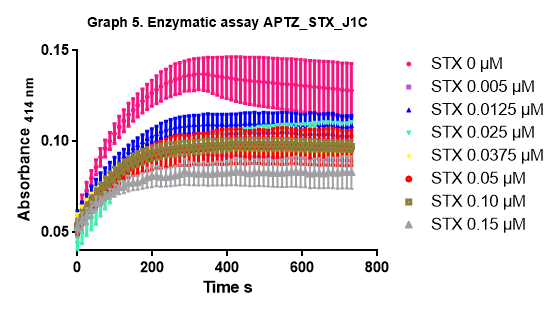 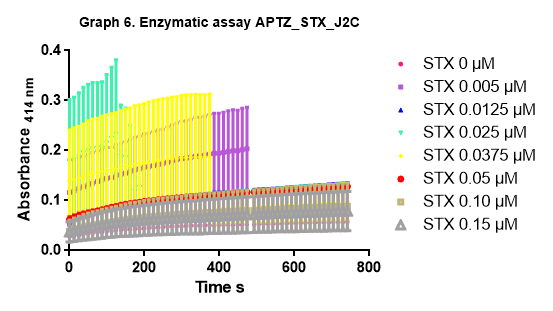 
From these results, there was no evidence of a dependence dose by the aptazymes. It was also thought that the erratic behavior of some curves, as well as experimental error, may be due to the fact that the Aptazymes were active before starting the reaction, so it was proposed to perform the experiment with a variation in the protocol in the cooling stage.

The same previous enzymatic assay was performed, but this time making a variation in the protocol. This time immediately after heating for 5 'at 90 ° C, saxitoxin was added (see more about protocol in the notebook).

The results obtained are shown below: 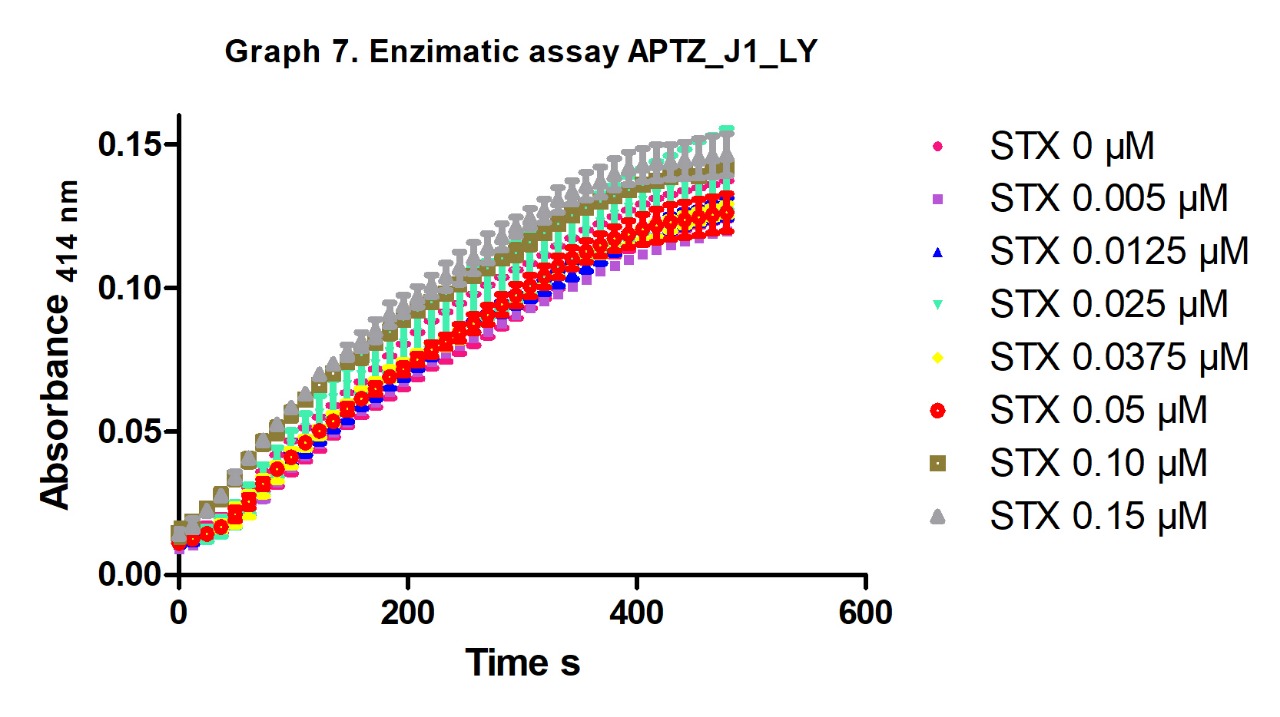 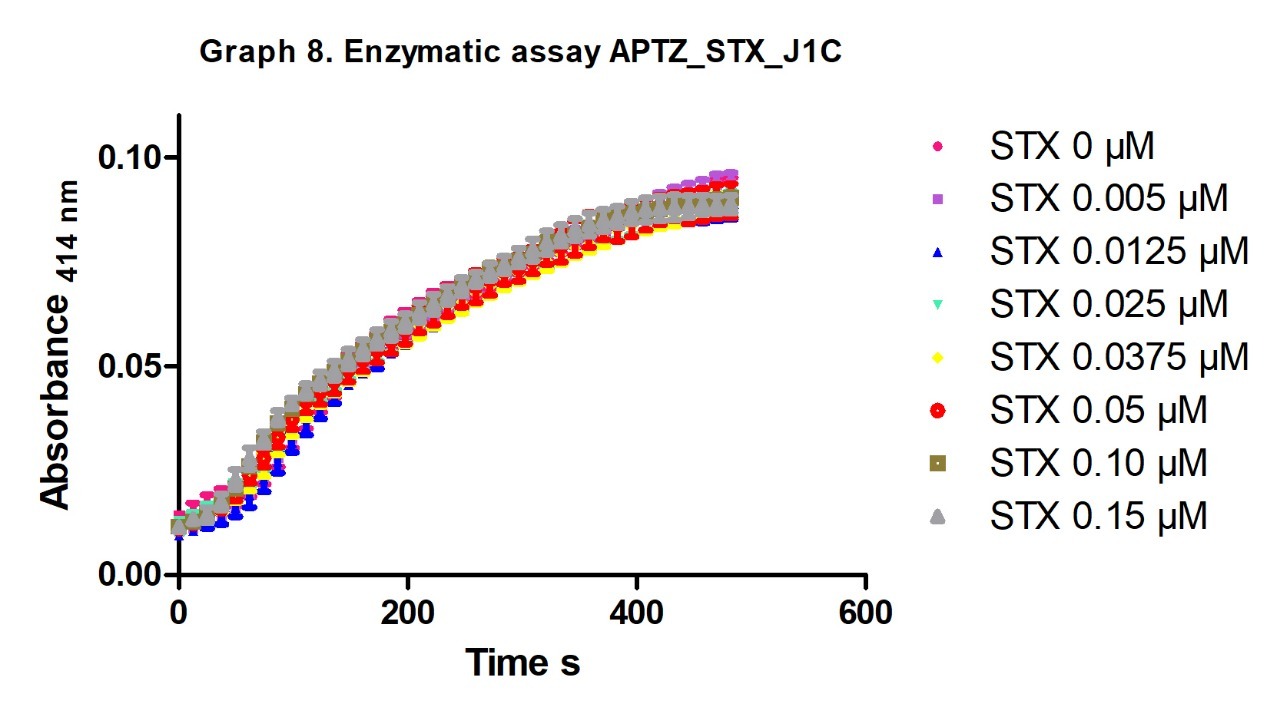 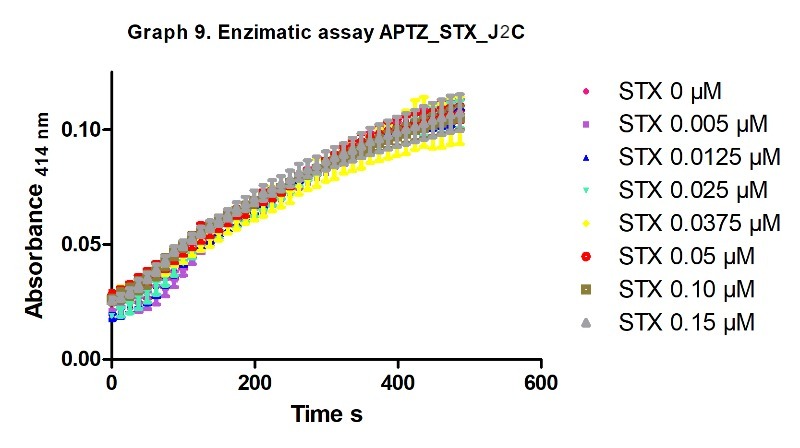 
Although there is no dose dependence, there is a stabilization of the curve when the protocol varies.

This experiment was carried out with the objective of evaluating whether ABTS oxidation reaction, which had already shown a dependence dose in the plaque assays, was capable of occurring when subjecting the aptazyme APTZ_AMP_P to the lyophilization process on Whatman N°1 filter paper. This filter paper was used given that it is known to generate an adequate environment for reactions involving DNA (like transcjription and translation of sequences) [4][5].

See protocol of Estimation of filter paper capacity and Lyophilized Preparation in the notebook.

See protocol in the notebook 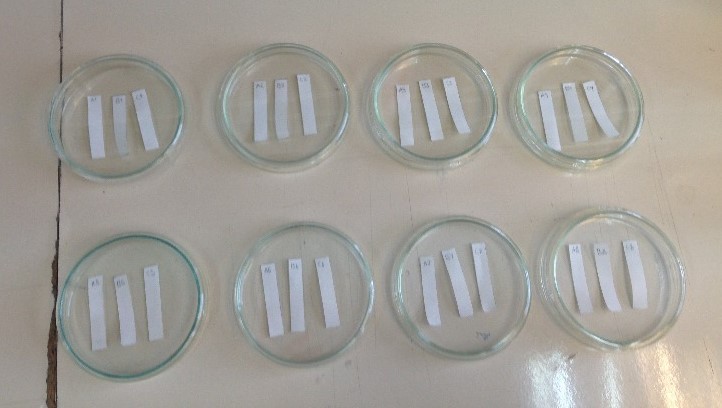 
In no case was an observable color detected in the lyophilized papers and subsequently re-hydrated, even when reviewing the papers the next day.

As a conclusion of previous result, it was thought to perform the same lyophilization operation but this time with each reagent 3 times more concentrated. In addition, in order to corroborate that the paper achieves dyeing, it was proposed to carry out an enzymatic assay on a plate and then smear papers in order to see if they achieve staining with the concentrations originally used.

See protocol in the notebook. 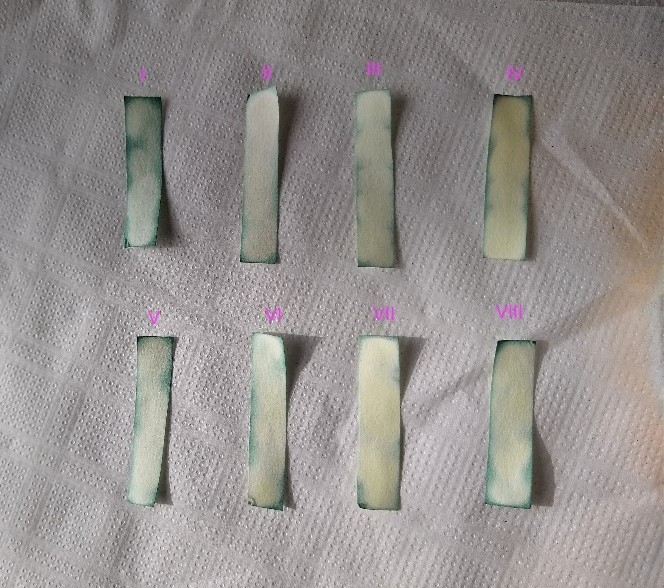 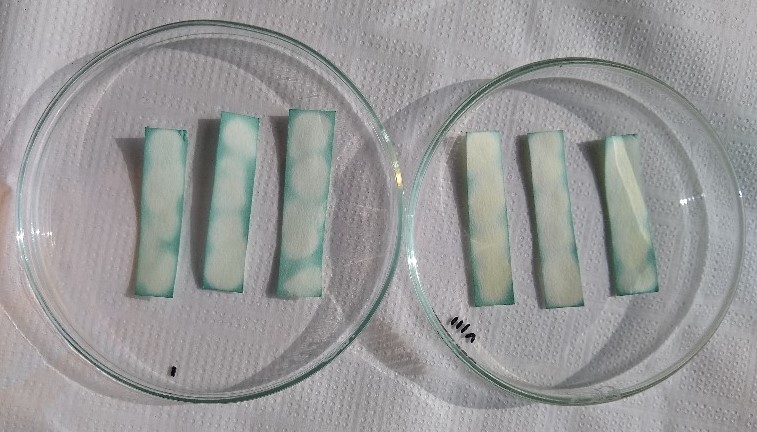 
It can be concluded that although the concentrations of all the reagents were increased, the surface of the paper is too large with respect to the added volumes, so the color is diluted and it is impossible to have a significant coloration. Additionally, with these results it is not possible to conclude that the reaction has occurred, given that the ABTS presents a visible coloration in the paper when the AMP is 0 (paper I), and when rehydrating, the liquid tends to go to the edges leaving a non-homogeneous distribution .However, we assume that there may have been a reaction, since, as seen in figure 4 and 5, in all papers with a ligand there is a slight yellow coloration in the center, which indicates that there may have been a change in color due ABTS oxidation or it is AMP’s natural colour.

An enzyme assay with aptazyme APTZ_AMP_P was carried out on a plate of 96 with the same concentrations of reagents from Table I (notebook) at 8 different concentrations of AMP and with triplicates. Once the test was done, 10 minutes were waited for later to collect 100 μL aliquots from each well to pour them on 1 x 5 cm2 filter papers.

Photographic record of the papers was taken to see if they presented color. 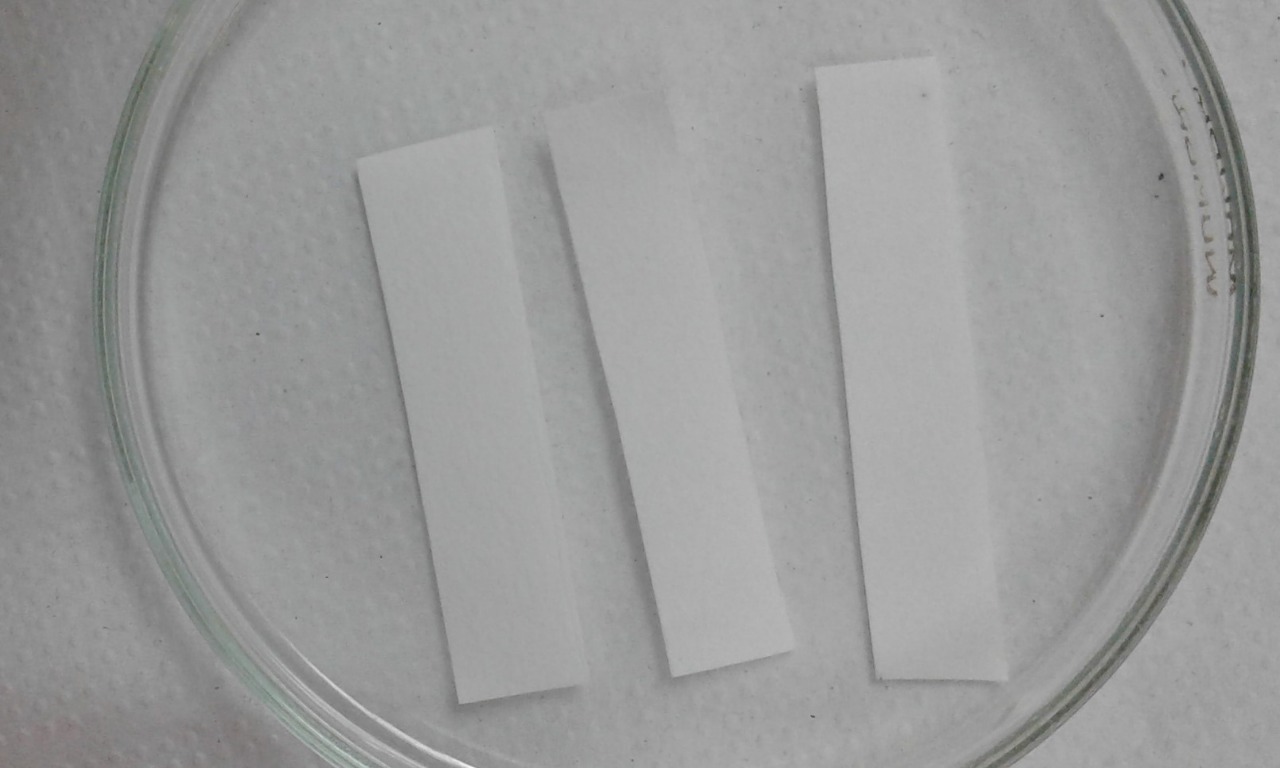 Figure 15. Papers covered with solutions from the plates before rehydration. There are shown paper VIII with highest concentration. 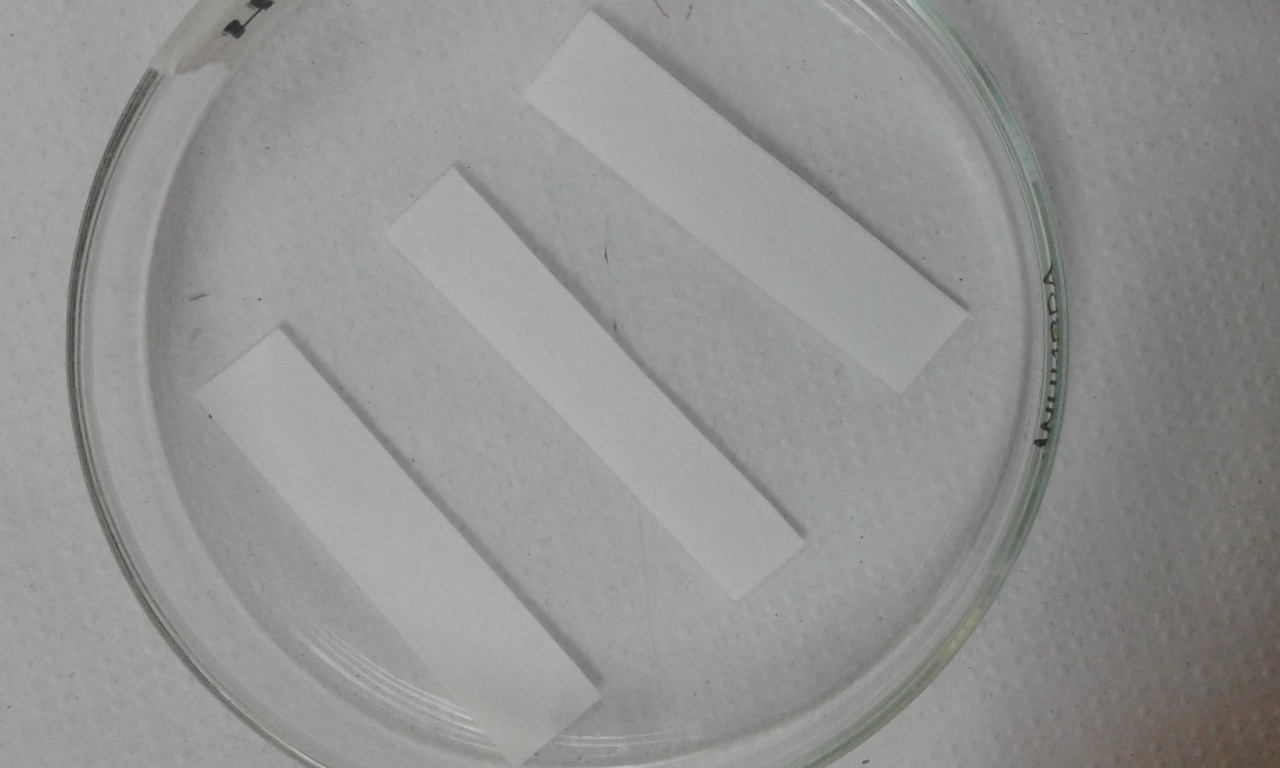 Figure 16. Papers covered with solutions from the plates after rehydration. There are shown paper VIII with highest concentration.


Although the reaction occurred in the plate of 96, there was no staining on the paper. From these results it was found that the concentration of reagents used is insufficient so that at the end of the reaction a staining of the papers with the given dimensions is generated.

4. Lyophilization as a Precipitate

Due the enzymatic assays in lyophilized papers with APTZ_AMP_P gave no evidence of a dosis-dependence (necessary to validate the method), the reaction content (DNA, buffer and H2O) was lyophilized inside Eppendorf tubes with duplicates to get pellets inside them.

(see protocol on the notebook). 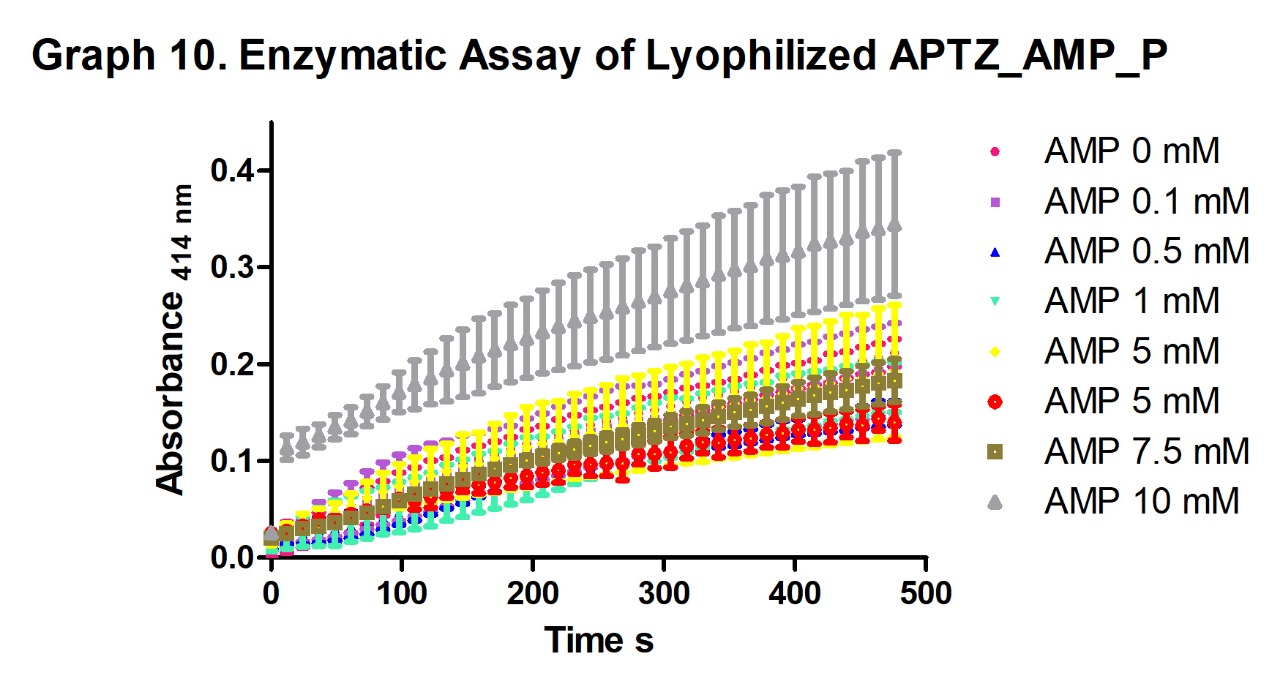 
It is theorized that variations in the protocol can generate different results. This could be explained by considering that the sequence adopts more homogeneous conformations when folding over saxitoxin although the dose dependence does not occur, which could be due to the fact that the segment of DNAzyme is not stable. Thus, when the saxitoxin was added and allowed to cool after heating it, it is thought that it adopted too randomized conformations, which led to results with high error.

About lyophilization, it was obtained that by increasing the concentrations of the reactants that are part of the reaction, certain coloration of the filter papers occurs. Although adding aliquots of peroxide to start the reaction after rehydrating the papers with the ligand (AMP), it is seen that the ABTS that has a persé coloration, concentrates on the edges of the papers, evidencing that this is very susceptible to forces motorized inside the paper (very mobile). So it is thought that a different matrix should be used if you want to work with ABTS or not lyophilize the ABTS and add it together with the ligand.

In addition, the ligand papers had a slightly yellow coloration in the center, in contrast to the reaction that did not use ligand. This result may be due to the fact that the AMP is fulfilling its function of joining the Aptazyme to generate the colorimetric reaction or the AMP is slightly yellow (that is why it appears in all the papers with AMP). Since there is no color gradient, it is thought that it could be more due to the second option).

Finally, to corroborate that the aptazyme can effectively tolerate lyophilization, the results of obtaining pellets as a result of lyophilization were analyzed. The absorbance vs time curve does not show a dose dependence although the trend line with the highest concentration is highlighted. This shows that lyophilization may be affecting the stability of some compound that is part of the reaction and that is susceptible to low temperature or high pressure (eg, hemin, abts) or Aptazyme is damaged in the process.