Amyotrophic lateral sclerosis (ALS), also known as Lou Gehrig’s disease, is a devastating neurodegenerative disease characterized by the progressive degeneration of motor neurons in the brain and spinal cord1. The disease is fatal, with an average survival rate of only 3–5 years after diagnosis2. The exact cause of ALS is still unknown. Several genetic factors have been identified and are currently being investigated further. No specific environmental factor has been definitively shown to cause ALS3. ALS can be classified as familial or sporadic, depending on whether or not there is a family history of the disease. Familial ALS (FALS) accounts for 10% of all ALS cases, while Sporadic ALS (SALS) accounts for the other 90%4 Although SALS and FALS appear identical clinically and pathologically, the genetics of FALS are better understood. Therefore, the medications developed thus far are mainly based on the research conducted on FALS rather than SALS.

The defining feature of ALS is the death of motor neurons in the motor cortex, brainstem and the spinal cord2. It is not fully understood why neurons die in ALS, but this neurodegeneration is thought to involve many different cellular and molecular processes5. 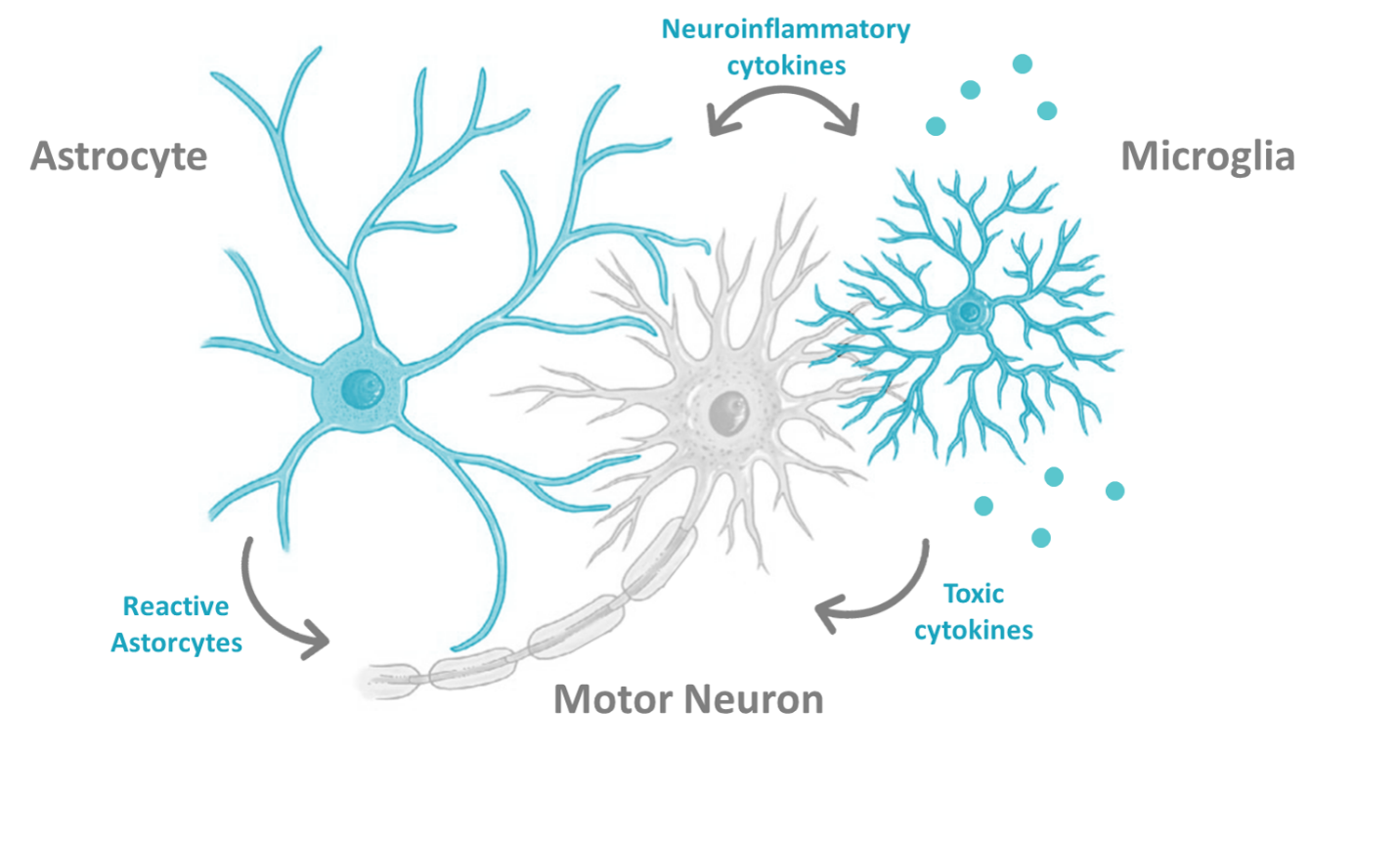 A recent study has shown that activated microglia cells are required to induce reactive astrocytes, by secreting cytokines such as IL-1α and TNF-α12. The synthesis of both these cytokines is mediated by the NF-kB transcription factor13. NF-kB activation in microglia causes motor neurons death in vitro as well as in vivo. Heterozygous inhibition of NF-kB in microglia substantially delayed disease progression in ALS mice model14.

The process where microglia secrete an excess of cytokines and induce reactive astrocytes is an inflammatory process called reactive gliosis. Reactive gliosis has been identified as a common process to ALS and other neurodegenerative diseases, such as Huntington’s and Parkinson’s disease12.

To date, there is no cure for ALS. Available medications focus on treating symptoms and providing supportive care, with the goal of improving quality of life and prolonging patient survival5. Currently there are two main medications sold in the market for treating ALS: Riluzole and Edaravone.

Riluzole has been found to modestly prolong survival by about 2-3 months15, although the mechanism of its action is poorly understood. Edaravone has been shown to slow the decline in only a small group of patients who meet very specific criteria16. To date, there is no evidence that either Riluzole or Edaravone are significantly effective in prolonging survival in most cases of ALS (FALS and SALS alike)17.

Our objective, as the BGU-IGEM team, is to develop a therapeutic system that will ultimately prolong survival of ALS patients via novel genetic engineering techniques.

We divide our project into two approaches: 1) identify and specifically target reactive astrocytes (and not normal resting astrocytes) by their distinguishing markers and prevent their toxic activities by promoting an intrinsic apoptotic signal 2) inhibit the secretion of toxic pro-inflammatory cytokines by microglia cells.

Only if both plasmids will enter the target cell and these promoters will be activated, the dCas9 and the gRNA will join together, to target a synthetic promoter that express an exogenous Caspase3. In order to add further specificity, we plan to deliver these plasmids using the Adeno-Associated Virus-9 (AAV9)20. This modified virus targets and delivers its contents specifically to astrocyte cells21. The activation of caspase 3 by the dCas9 system will eventually lead to apoptotic death of the reactive astrocytes22.


The Microglia Pathway:
In the microglia pathway, we will knockout the IKKβ gene in microglia cells, using the CRISPR-Cas9 system23 delivered by AAV620 virus that targets microglia cells24. The IKKβ gene is transcribed and translated into a kinase which has a role as an activator upstream to the NFkB complex assembly. Therefore, the knockout will ensure a decrease in the neuro-inflammation transducing classical NFkB signal25.

Aiming for specific microglia expression, we chose to combine the pF4/80 promoter, which is a known macrophage marker26 with AAV6 viral vector. The pF4/80 promoter will be responsible for the expression of the Cas9 protein, while the U6 promoter, which is a non-specific promoter, is responsible for the expression of the IKKβ guide RNA sequence. Our CRISPR Cas9 system will target and knock out the IKKβ gene, resulting in inhibition of inflammatory cytokines synthesis and thus reduce the formation of new reactive astrocytes in the system.

This novel combined approach is aimed to break the cycle of unregulated reactive gliosis, and hopefully will slow down the progression rate of both familial and sporadic ALS. By combining the removal of toxic cells with the prevention of the formation of new ones, the number of toxic astrocytes can be significantly reduced, thus slowing down the progression rate of ALS. 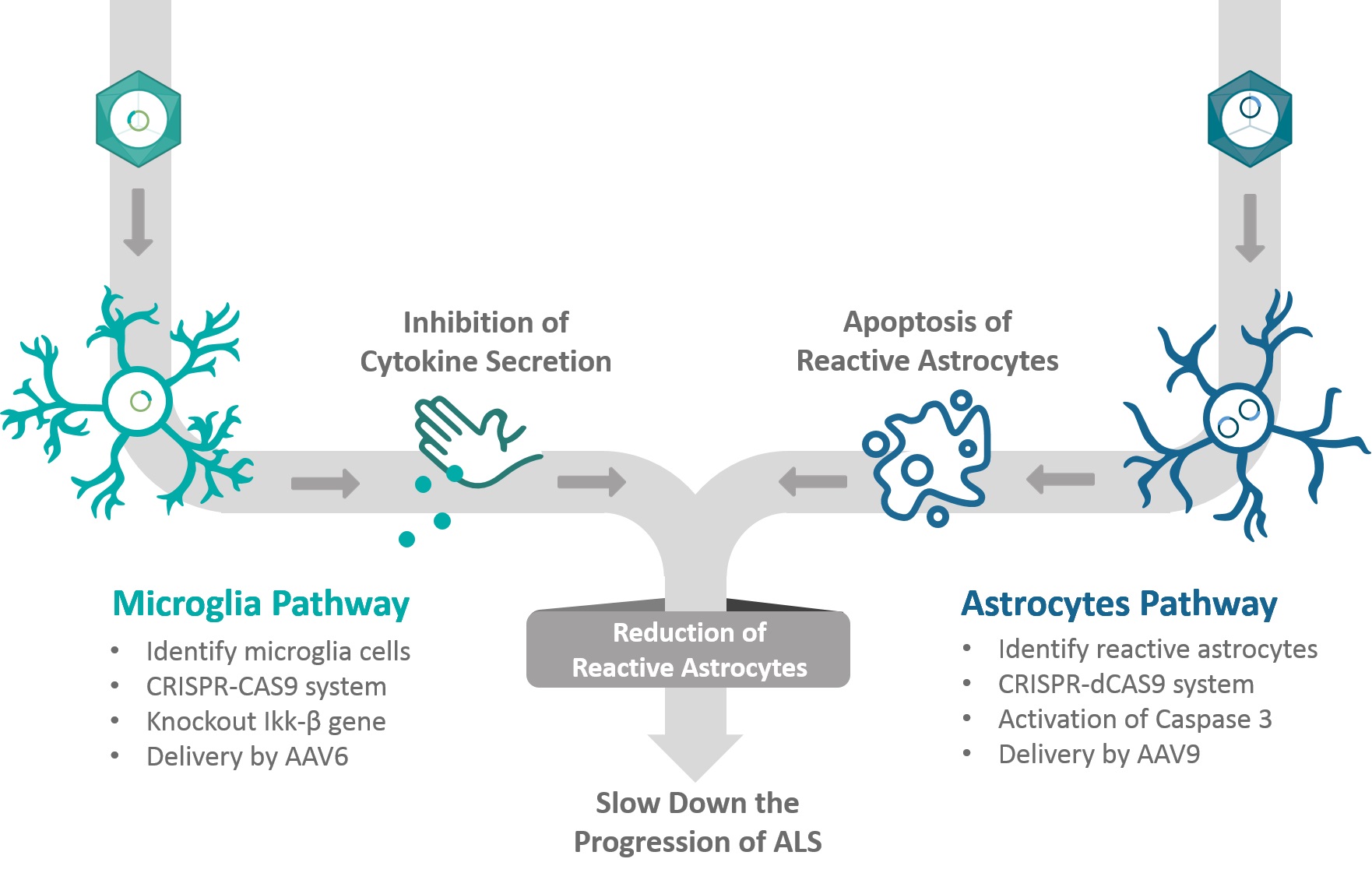 As reactive astrocytes and microglia are associated not only with ALS but other neurodegenerative afflictions included are Huntington's, Alzheimer's, Parkinson’s disease and brain injuries12, our approach may be suitable to these "reactive gliosis" afflictions by developing treatments based on our novel method to target the reactive astrocytes and microglia