Our team chose to participate in the Fifth International InterLab Measurement Study in synthetic biology.
The goal of the iGEM InterLab Study is to identify and correct the sources of systematic variability in synthetic biology measurements, so that eventually, measurements that are taken in different labs will be no more variable than measurements taken within the same lab.
In this study we want to reduce lab-to-lab variability in fluorescence measurements by normalizing it to absolute cell count or colony-forming units (CFUs) instead of OD.
The fluorescence in the bacteria in our experiments occurs due to the presence of a gene that encodes a green fluorescent protein: GFP.
In cell and molecular biology, the GFP gene is frequently used as an expression reporter protein. Reporter genes are often used as an indication that a certain gene has been internalized or expressed in cells or organisms.

All our measurements were taken in a plate reader that can read both absorbance and fluorescence (Neoteck-Tecan-INFINITE M100) without a pathlength correction. The temperature was set to 25̊C, under shaking with a duration of 3 sec and an amplitude of 2 mm. We went through a tutorial and learned how to operate the machine.
In addition, we used the following reagents (Partially supplied by iGEM):

As part of an ongoing work in a biological laboratory, safety gear was used to work with bacteria. The work was done with closed shoes, long pants, gloves and lab coats.
In order to maintain a clean environment, and sterility between the samples the work was performed next to a flame, and all the disposable parts were thrown after a single use into a biological waste bin.
Before and after work, work surfaces were sterilized with 70% alcohol. 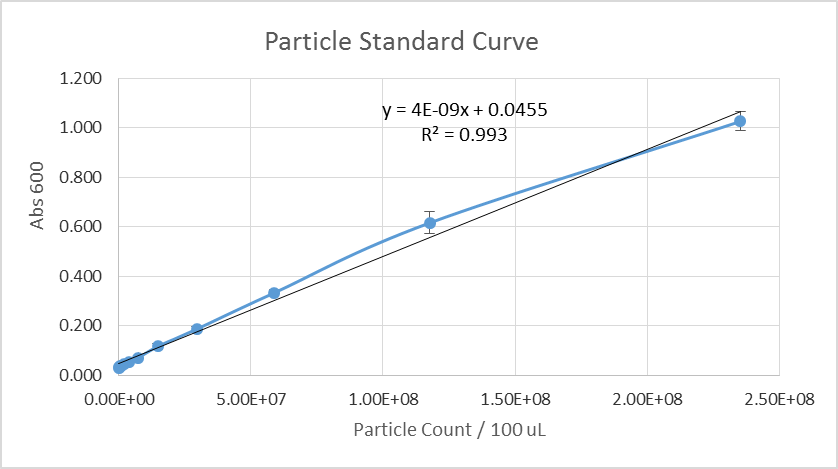 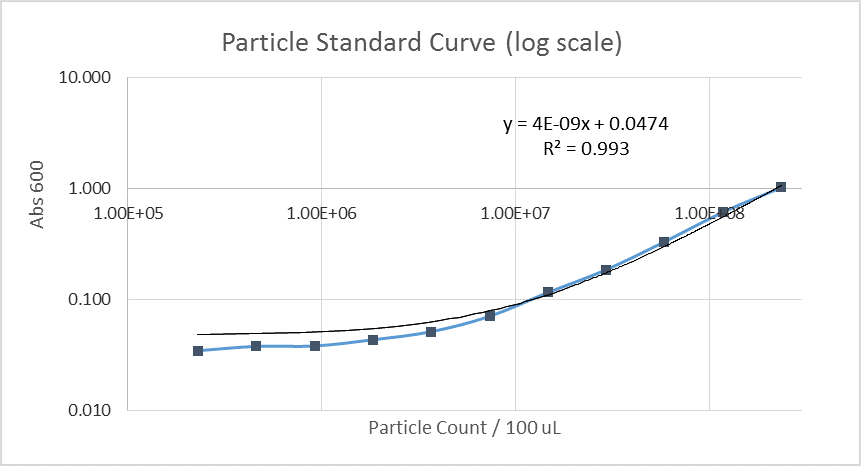 We got a linear correlation between the Abs600 and the amount of particle. 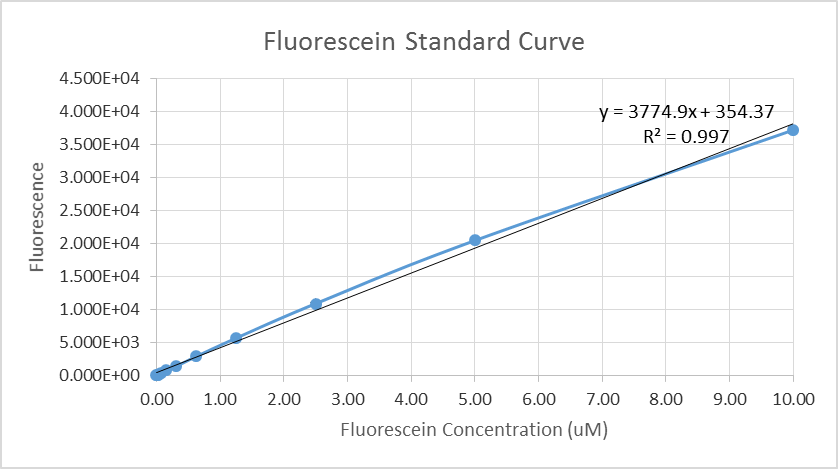 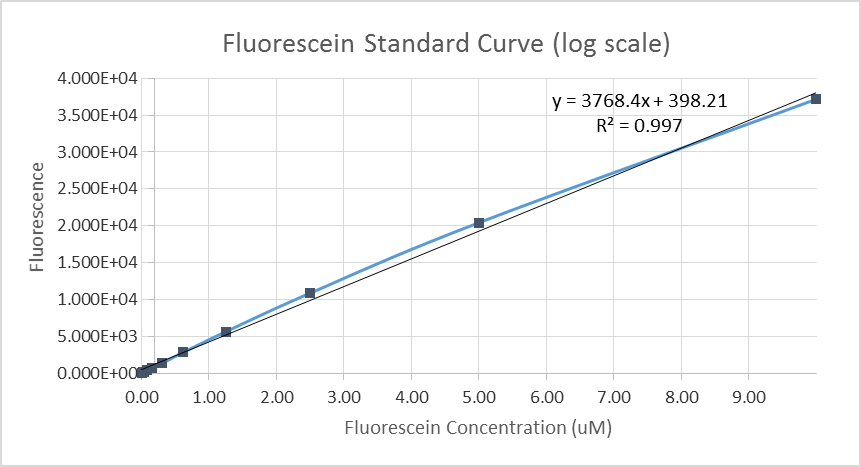 The Fluorescence standard curve of Fluorescein (figure 3) allows us to convert cell-based fluorescence reading originating from GFP fluorescence (at the same wavelengths) readings to equivalent fluorescein concentrations found in the calibration curve.

Cell measurement protocol:
Day 1:
Escherichia coli DH5α was transformed with the following parts all harboured in pSB1C3 plasmids as indicated in table 2:

Day 2:
2 colonies from each of the transformation plates were picked and inoculated in 10.0 mL LB medium + Chloramphenicol.
The cells were incubated overnight at 37°C and 220 rpm shaking.

(note: CFU values presented below are in 10^8 scale)

These results provide us a direct correlation between actual concentrations of bacteria (actual number) to OD600.

As a collaboration with the HebrewU iGEM team, we provided their team the Escherichia coli DH5α strain for their InterLab study. Representatives of this team came to our lab and we were glad to give them a tour.

In conclusion, we hope that our measurements and results will provide the required data, which will help to achieve the final goal of this InterLab experiment.

It was a wonderful experience to work on an international, collaborative study and help to the synthetic biology field develop. 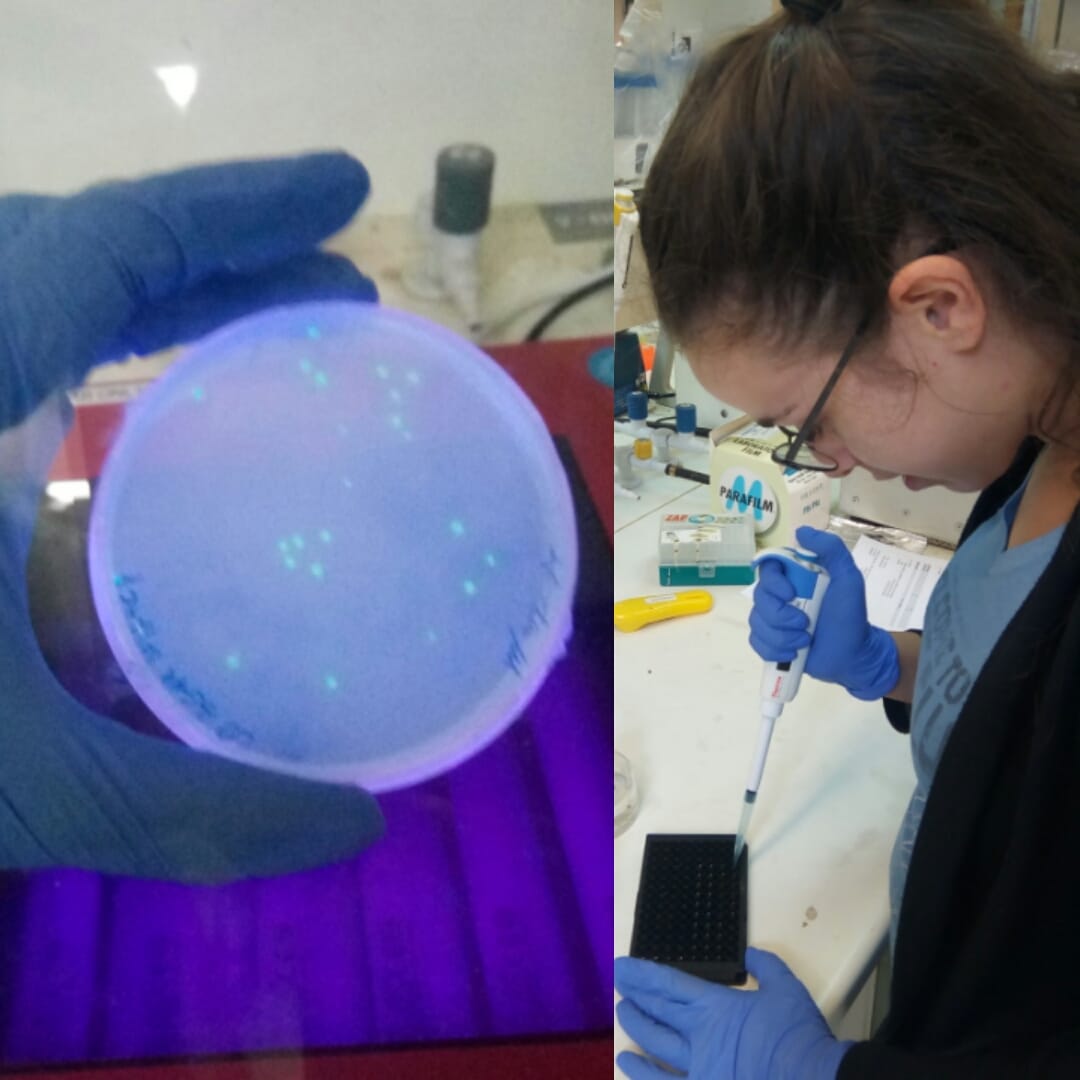 Figure 5: Us, hard at work on the Interlab measurements