Throughout the past year, we aimed to inspire the public about the potential of synthetic biology to solve world problems and the potential of our iGEM project to help ALS patients.Furthermore, we believe that if a medical solution is not presented properly, clearly and with sensitivity, the recipients may reject it even if the science is accurate.

On Thursday July 6, 2018 the OriginALS team participated in the “Annual Race for ALS Patients”. All donations collected went directly towards promoting ALS research and supporting ALS patients and their families.

Leading up to the race, the OriginALS team dedicated itself to fundraising for this great cause. Each team member asked family and friends to sponsor them in the race. Additionally, we embarked on a social media and a poster campaign around the university to recruit both donations and additional race participants. We followed this up with a sign-up booth located in the student union building, in which we took shifts for several days personally approaching students and encouraging them to donate and join the race.

The proceeds from the iGEM on the Bar event were used to subsidize fellow students’ race admissions fee, providing an additional incentive to participate. Also, we must thank Ben- Gurion University for sponsoring free transportation to and from the event. Through these combined efforts, we were able to collect a respectable sum and add twenty students to our race delegation.

On the day of the race, our team assisted with the race route and event area set-up. Once the event began, we helped with participant registration and handed out the official t- shirts. After the race, we assisted with handing out medals, water, and popsicles to the runners. Of course, our team ran in the race as well (we had trained by running from the lab to the fluorescent microscope in the adjacent building). 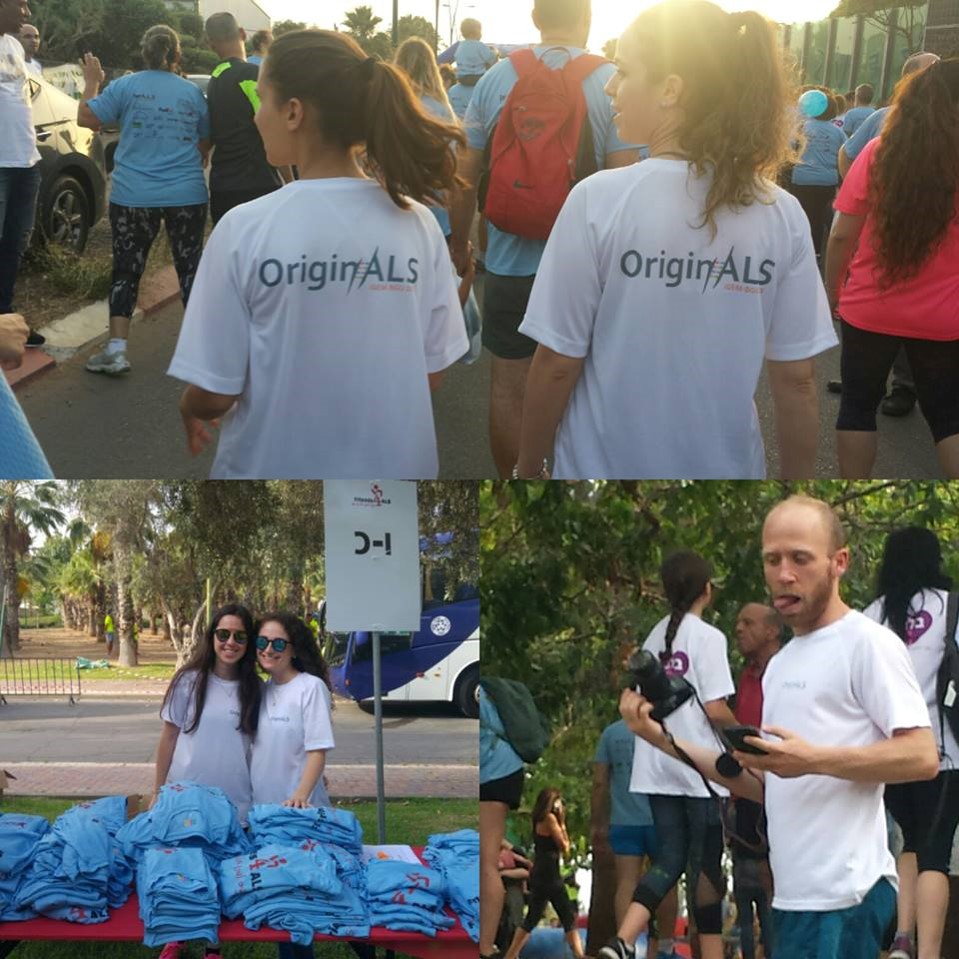 During this event we had the opportunity to meet ALS patients and talk with their families, hearing how they confront the disease on a day to day basis. The event was very meaningful for our team, as we met the people who we would potentially be helping, giving us motivation to move forward with our project.

Avital Bailen, an OriginALS team member, visited the Addgene headquarters in Boston on April 2, 2018. Addgene, a leading non-profit biological resource center, provides key materials used in laboratory research. During this visit, Avital recorded a podcast where Dr. Kim De Mora, Addgene Business Development Analyst and a former iGEM judge, interviewed Avital about iGEM, the OriginALS project, and the challenges the team could face during the coming year.
We would like to thank Addgene’s CEO, Dr. Joanne Kamens, Dr. Kim De Mora, and all of the Addgene staff for this great opportunity and wonderful podcast! Listen to the podcast featured on Addgene’s blog!

Listen to Avital at AddGene:

Chapter 1 - Introduction to Kim de Mora and his role at iGEM. Description of the key components of iGEM projects including human practices.
Chapter 2 - Introduction to Avital Bailen and the OriginALS iGEM project.
Chapter 3 - How the OriginALS plan to tackle human practices including the ALS Next Generation Research Conference.
Chapter 4 - The intersection between Avital's goals at iGEM and Addgene's goals - promoting networking and collaboration between scientists.
Chapter 5 - Addgene resources the OriginALS would like to use as part of their project.
Chapter 6 - Addressing biosafety on the OriginALS.
Chapter 7 - How iGEM has enabled Avital's professional development through networking, collaborations, and developing the OriginALS like a startup. 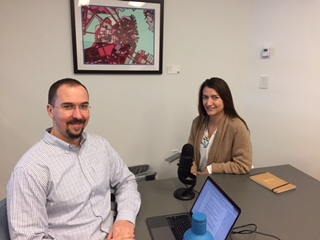 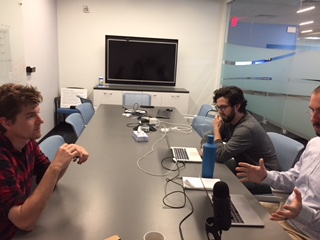 Lecture at the Manga Pub

On Monday, May 21, 2018 the OriginALS team hosted the "iGEM on the Bar" event. We invited friends, colleagues and the public to an evening lecture at a local pub in Beer Sheva. At this event, our team gave a presentation about iGEM, the OriginALS project, and the upcoming annual ALS fundraising race.

We began by explaining what this new field of synthetic biology is all about. Then we delved into the ALS disease and how our project aims to slow its progression. Next, we described to the audience the uniqueness of the ALS community in Israel. We ended this event by inviting our guests to join us and participate in the annual ALS fundraising race with the OriginALS team.

At the end of our presentation, the OriginALS team- members mingled with the guests answering questions and discussing the project. 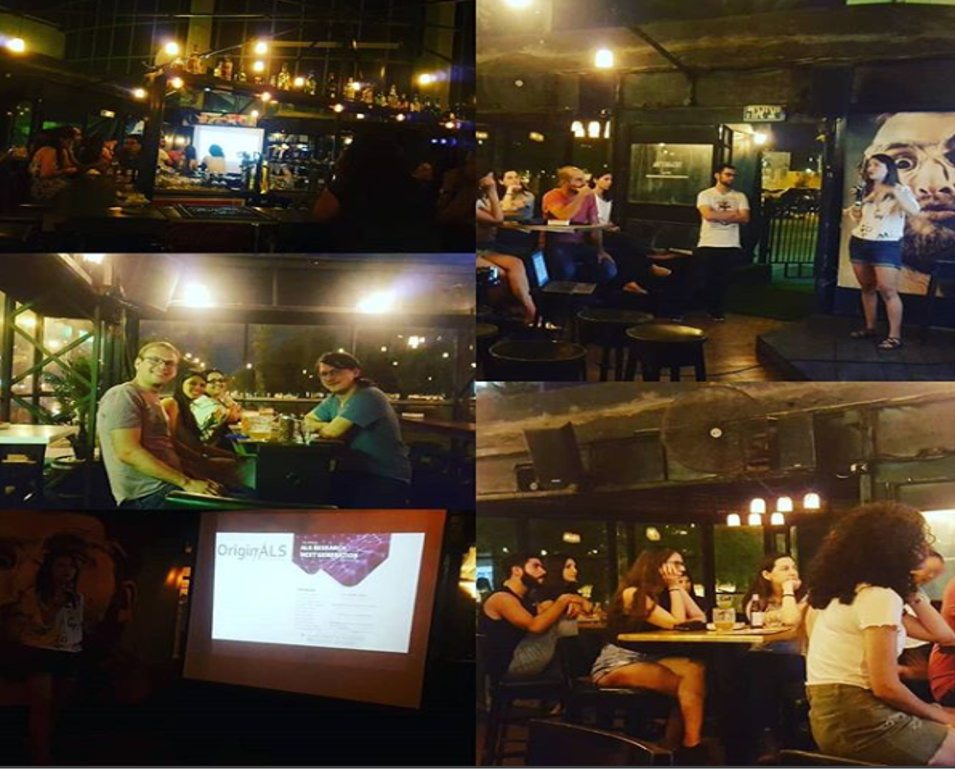 A Meeting with Tzvika Levi

At the ALS race closing ceremony, several patients shared their experiences with the disease. One of the patients who spoke was Tzvika Levi. Tzvika is known in Israel as the “father of the lone soldiers” due to his tireless support of and advocation for lone soldiers. Lone soldiers are soldiers whose families are not in the country or are not able to care for them during the child’s mandatory army service in the Israel Defense Forces. Tzvika recently won the president’s award for outstanding Israeli citizens due to this work.

Avital Bailen, an iGEM team member, has known Tvika since she was a lone soldier herself. At the onset of the OriginALS project, Avital visited Tzvika and his corageuous wife Naomi, and wrote the following about that experience:
I first met Tzvika when I was eighteen years old, freshly out of high-school and a few months after making Aliya to Israel. By that time, Tzvika was already a legend to lone soldiers. We had heard countless stories about Tzvika “saving the day” when there was nobody else to turn to; helping people get into the army units they were interested in, connecting them to adopted families, or just checking up on them to say hi. I didn’t know it at the time, but I too would make a phone call one day to Tzvika when I was in need.

I had served in a co-ed infantry combat unit for almost 3 years and was looking forward to my discharge vacation, a few weeks of paid vacation given to combat soldiers as a token of appreciation for their service. I was having some difficulty with my Brigade Commander, a very high-ranking officer, who insisted on revoking my discharge vacation. Frustrated by the situation, I decided to try and contact Tzvika to see if he could help.

Tzvika seemed really calm as I explained the situation. When I finished, he simply said “Ok, let’s see what we can do, I’ll call you back.” Less than ten minutes later Tzvika called back and said, “I talked to your commander, the problem is solved.” As a lone soldier, with few connections and little influence, this was amazing. A huge relief to have someone looking out for me when for so long you have learned to rely on yourself.

Meeting with Tzvika, years later, as part of the iGEM research project, was very meaningful. When I first walked in I began by introducing myself. Tzvika smiled and immediately said “I remember you!”. I was amazed he had remembered me after all these years and after taking care of thousands of lone soldiers over the years. While it was difficult to see Tzvika looking frail and sick, I watched in amazement as he used his computer to type with his eye movements and communicate. When I asked him how he is doing, he answered “I am still helping lone soldiers.”

We continued to catch up as I shared the details of our research project and listened as Tzvika shared his experience with ALS. Looking back on that meeting, I am truly honored and excited to rekindle my friendship with Tzvika and involve him in the 2018 BGU-iGEM team! 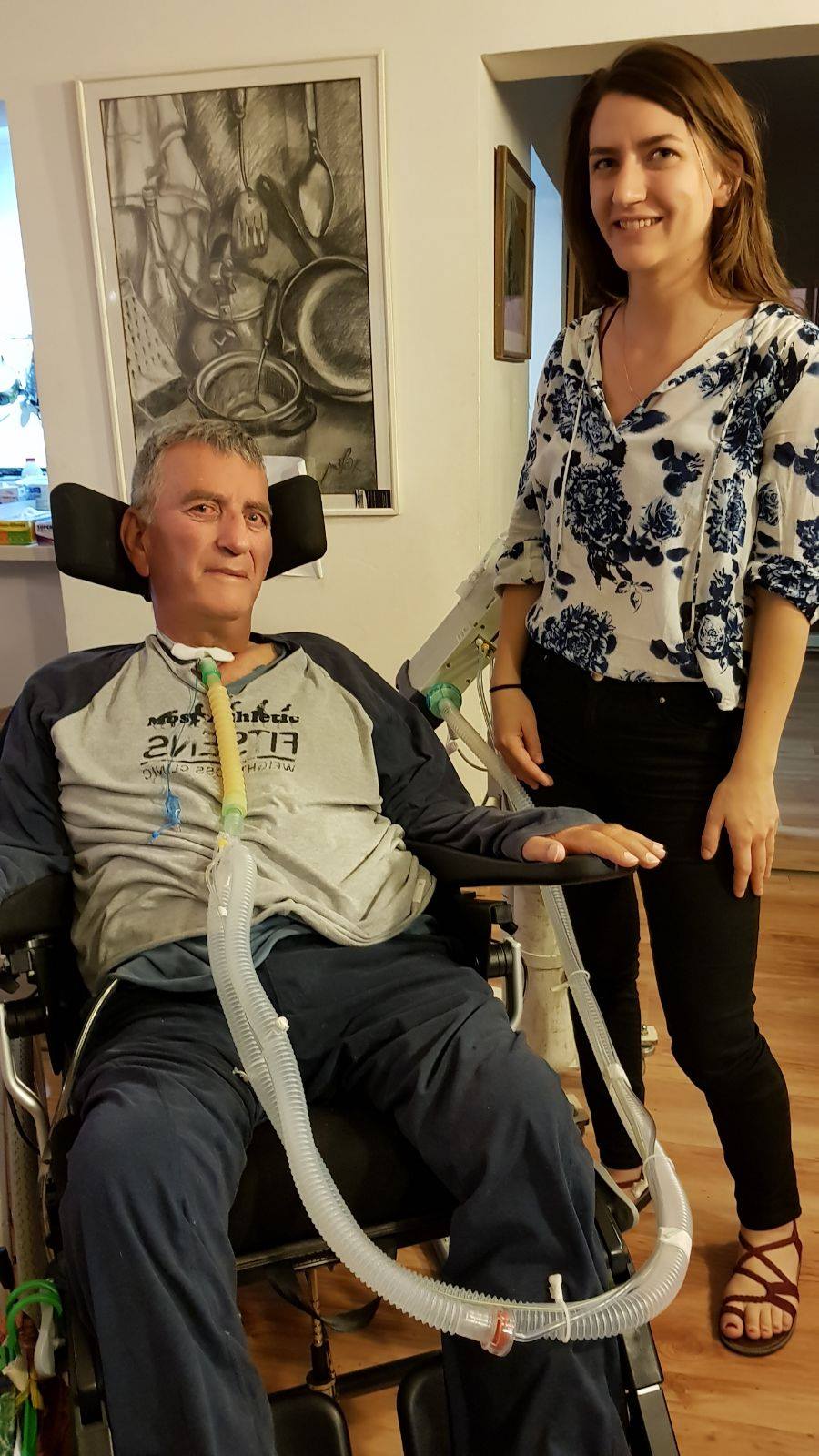 On Thursday, August 2, 2018 a group of twenty students from the Choosidman Youth Science Center visited our lab. This high-achieving group of high-school students participated in a two-week Science workshop during their summer vacation.
As part of this workshop, they visited our lab and were taught about iGEM and the OriginALS project. After the introduction, we gave the students a tour of the lab and explained some of the processes we use in order to implement our ideas, such as plasmid cloning methods and how cell-lines are maintained. The students were especially excited to learn about the high-school iGEM track.
We encouraged them to investigate the option of putting together an iGEM team at their local schools. It was a pleasure to host these talented students who had excellent and insightful questions! 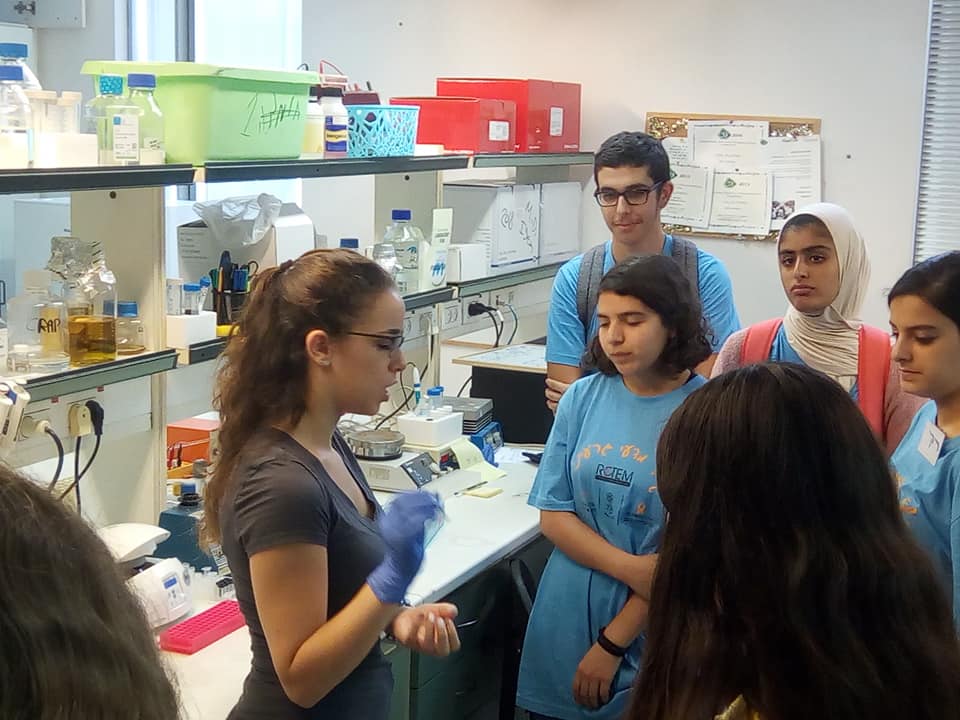 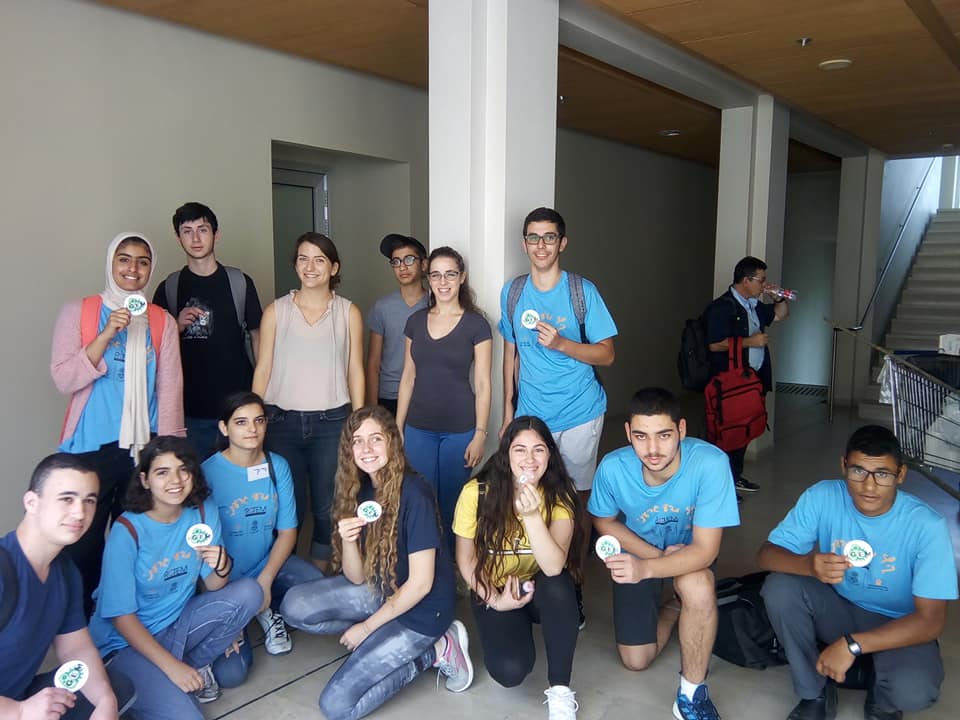 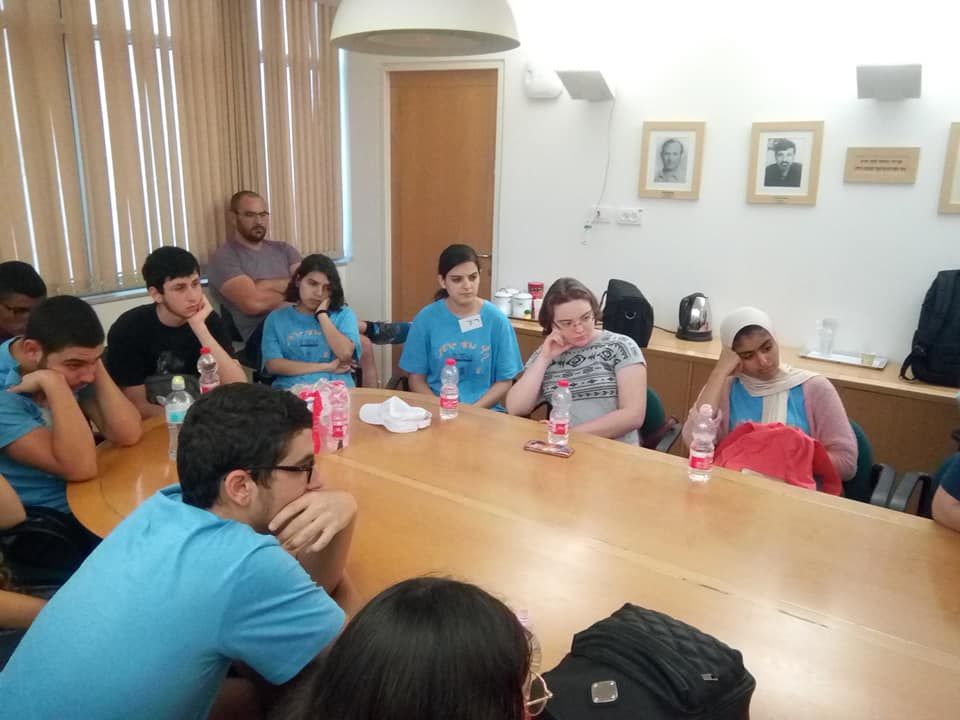 OriginALS team member, Nitzan Keidar, submitted a post to iBGU: Innovation, Science, and Technology Blog, where she discusses how the 2018 iGEM-BGU team began its journey. 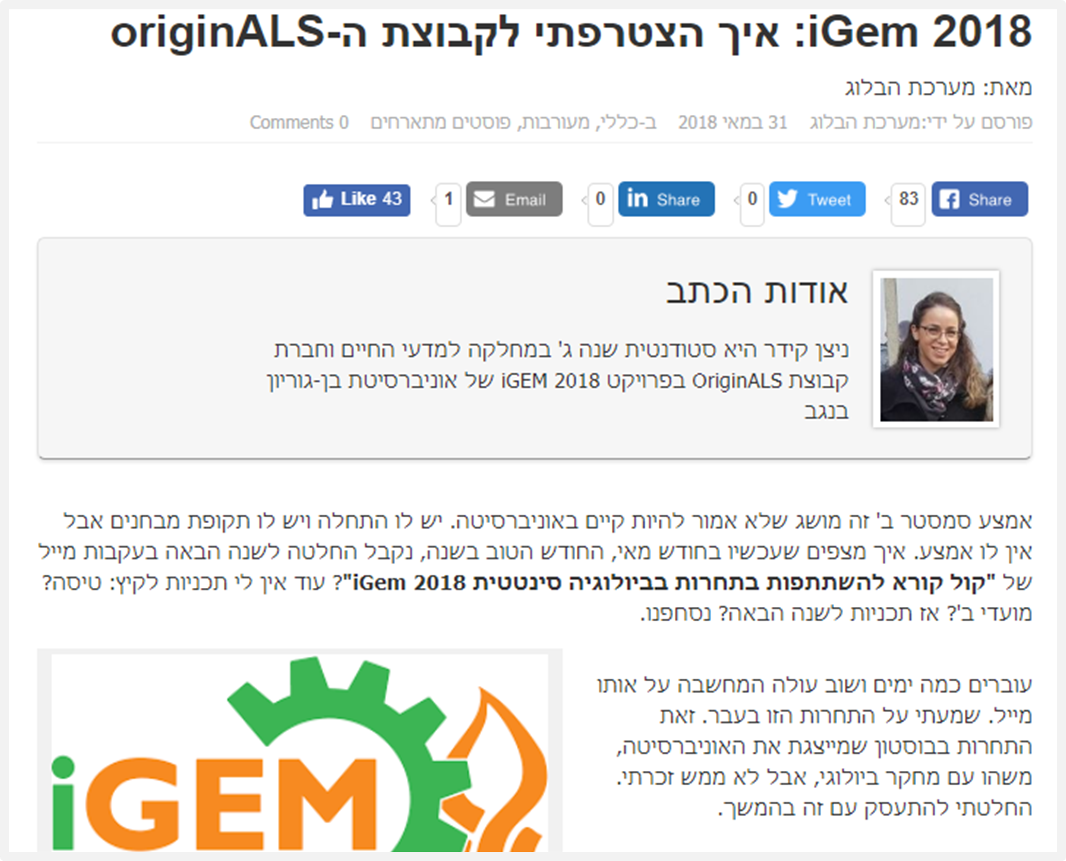 OriginALS team member, Liat Tsoran, was invited to a local morning show “Morning Health,” where she discussed her father’s battle with ALS and the OriginALS project. 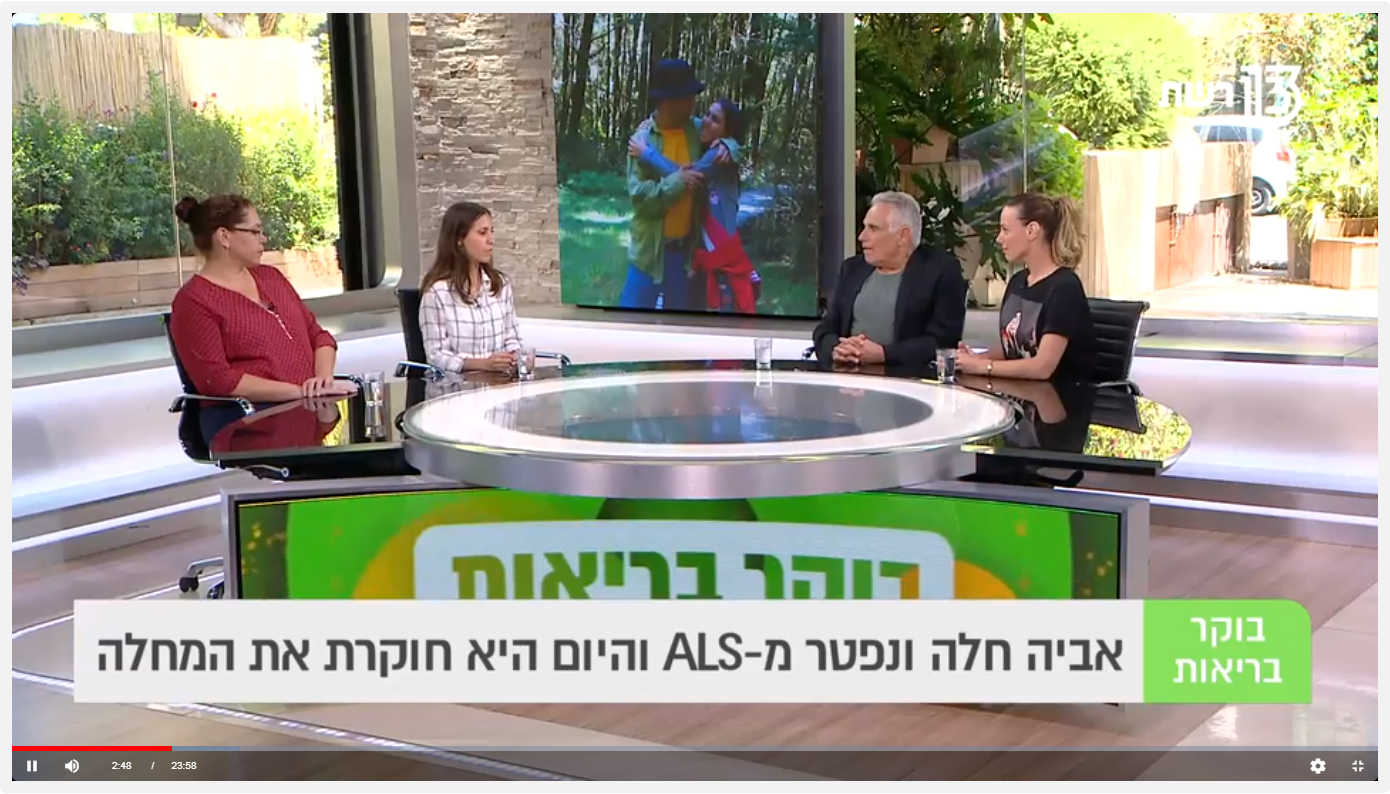 OriginALS team member, Liat Tsoran, was interviewed for the national newspaper Ynet, where she discussed the inspiration for the OriginALS project. 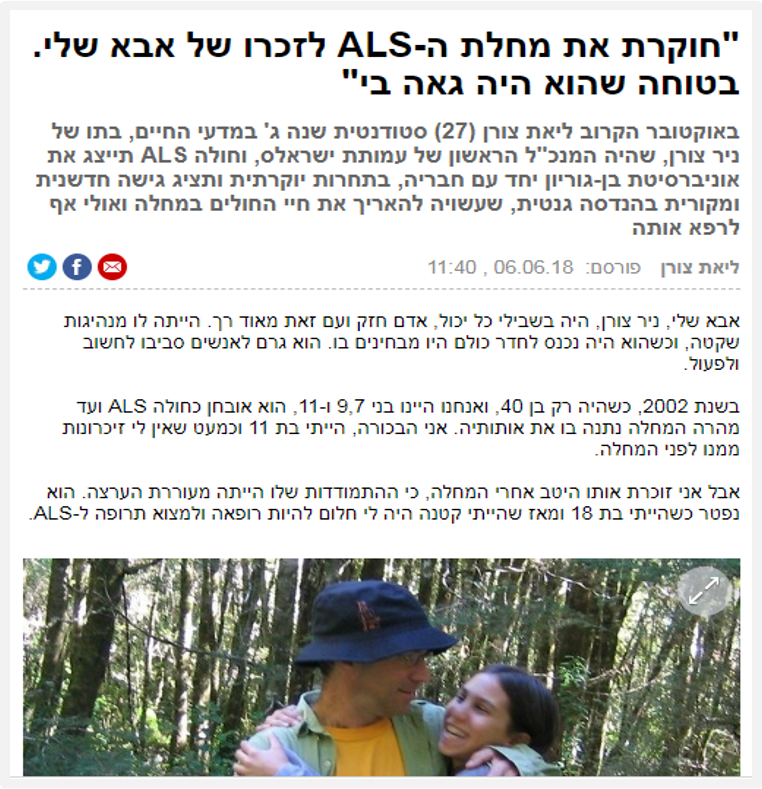 As part of our goal to make the OriginALS idea accessible to the public, we created a short animation video which provides a visual aid to understanding the scientific aspects of the project.
We tried to be very precise with our video message and invested a great deal of effort in order to get people excited about this idea, yet avoid spreading false hopes to ALS patients and their families.
We hope you enjoy and learn something new!