The purpose of our project originated after a brainstorm discussion on what problems most affected Baltimore City citizens. We went through ideas such as air pollution and curing cancer, and presented our project ideas to each of our team members. However, the projects that really stood out to our team were the clot making and clot breaking. The clot making team focused on treating trauma injuries, such as those caused by gun violence. We knew that with Baltimore City having one of the highest murder rates per capita in the country, it was important to figure out a way to lessen the rate of murders through treatment. We noticed that current bandages and sponges with coagulation enzymes were expensive, and also wanted to make sure that our final product would be cost effective for Baltimore citizens.

Once we had our projects decided, we began to conduct research on how to design our constructs.

The clot making team looked at ways that previous teams have coagulated blood. The first team that we came across was the 2016 Lethbridge High School team, who used Cerastotin (Horned desert viper) as their enzyme for coagulation. We saw that they were successful and decided to contact Dr. Brian Dempsey, who gave us more information about their team’s constructs. Upon hearing about these constructs, we decided to make three constructs that included their original construct. For all of the constructs, we codon optimized for E.coli. One construct included a His-tag for nickel column purification and a LacI promoter for tighter regulation and inducibility. The second construct included a His-tag while as the third was just the codon optimized construct. We named these constructs “Cerastocytin” after not being able to pronounce Lethbridge’s construct. 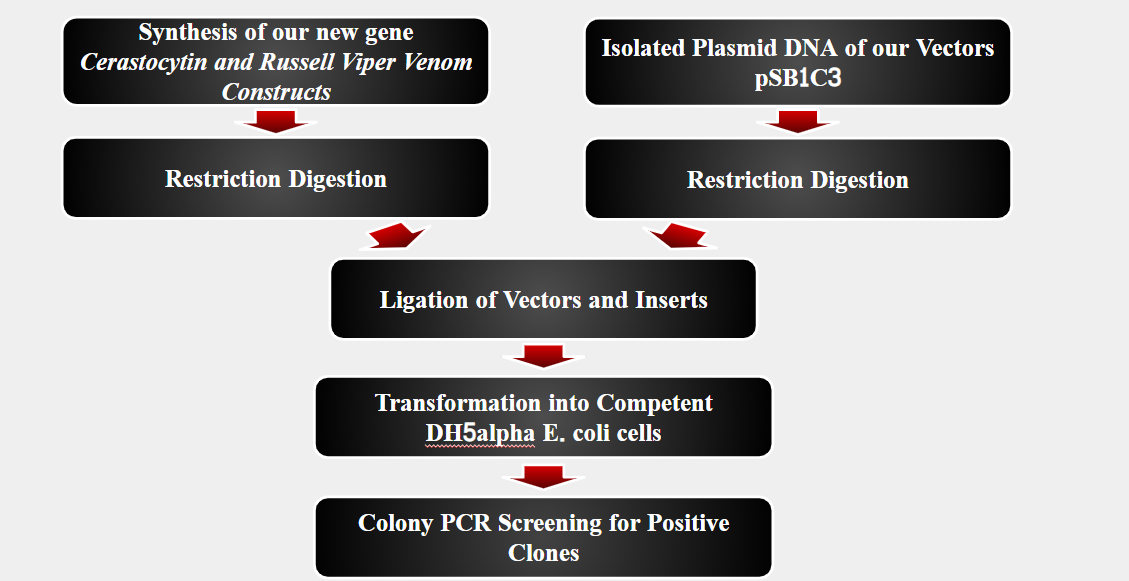 Finding a method of decoagulation was not difficult, as the clot breakers researched what the human body naturally uses, as well as what is clinically used, to decoagulate blood: tPA. Potential issues were brought up with the folding of the tPA, and as such, the clot breakers sought out to find another more consistent option. Ironically following the trend of the project being related to snakes, the clot breakers found a relative of tPA (reptilase) that is shorter with fewer disulfides, and thus was more likely to fold correctly. These two genes were used to design two constructs. On top of that, the clot breakers added a T7 promoter to both genes to better regulate their expression (though a construct was designed using a standard constituent promoter for a variation of the standard tPA construct).

To test our constructs efficiency, we planned to transform our constructs into DH5∝ E.coli cells, run a colony PCR screening, send them off for sequencing, and run protein gels.