The Baltimore Bio-Crew’s participation in the iGEM 2018 interlab study was not only an informative experience, but also quite empowering for our team. Contributing to the efficiency of experiments and data production of scientific labs across the world was an amazing experience. This year, our participation in iGEM’s 2018 Interlab encouraged us to gain skills in necessary research procedures, learn to use scientific lab equipment, and pushed us to produce reputable results. 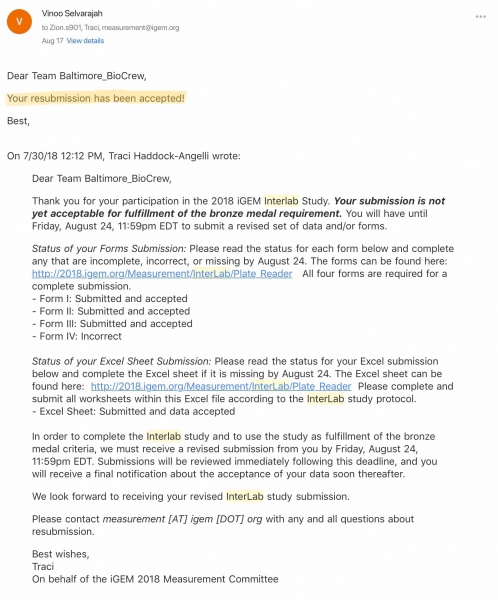 The objective of the Interlab was to improve the methods in which labs can reproduce experiments and repeat measurements. In synthetic biology, the idea of a “reproducible experiment” is crucial to obtaining valid data and sharing protocols that can be conducted in other labs.

One of the most commonly used markers for certain measurements in synthetic biology is Green Fluorescent Protein (GFP), though there are limitations when using this as a bio-marker. Fluorescence is not a measurement that can be consistently obtained, as it is measured with different protocols, units, and scientific equipment.

The goal of the interlab was to find a more easily regulated way of measuring data. Our team conducted experiments to compare the validity and efficiency of fluorescence measurements against that of absolute cell counts.

After completion of the experiments, and a lot of dedication in the lab as a team to complete the requirements of the interlab we reached some many findings about the nature of our data. When measuring the growth of bacterial cell colonies we determined the fluorescence measurement, absorbance measurement, and finally the absolute cell counts. We used the Tecan GENios Plus plate reader for our fluorescence and absorbance measurements. The data from these experiments provided many insights into the reliability of certain measurements over others.

We finally measured the absolute cell counts for each of the colonies grown, which ended up being a very involved process. We found that after incubation, our positive controls grew far more than our negative controls. We also found that as the bacterial cells were diluted, the amount of colonies that grew decreased for each of our six devices. One colony is an indication of one cell growing from the original solution. We found that the dilutions created a quite proportional decrease in cell colonies formed on each of our plates. 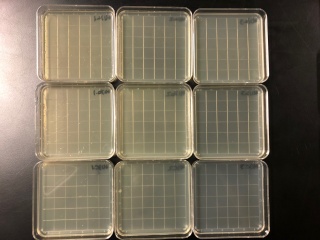 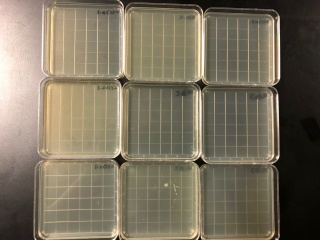 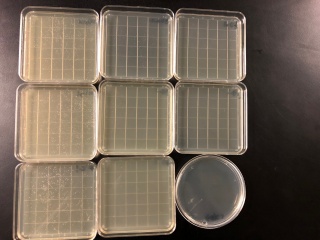 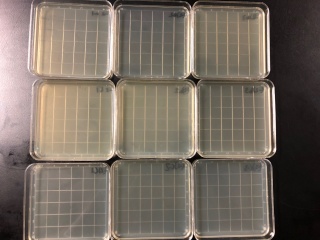 Our experience with the 2018 iGEM Interlab proved to be extremely useful. We integrated some of the skills that we developed during our participation in the Interlab within our own project. The ability to learn how to do a series of dilutions, appropriately measure bacterial colony growth, and measure optical density proved to be very practical. There were only a few issues that we seemed to encounter during our experimental process. The first issue was that our plate reader, the Tecan GENios Plus, did not originally come with an OD 600 filter. The only filter that we had within our lab that was close to an OD 600 filter, was an OD 550 filter. Although we attempted to purchase the filter that we were instructed to use in the protocol, we could not find any local facility with this filter or any online science laboratory supply store with this filter. Instead, we had to develop a conversion factor that would make our absorbance measurements more accurate to that of an OD 600 filter. This could have potentially impacted our data. The second issue that we faced was determining the meaning of an inconsistency within the protocol. Though the antibiotic Chloramphenicol was referenced as “Chlor” throughout most of the steps of the protocol, there was an issue towards the end. We saw that Chloramphenicol had a different abbreviation as “Cam” which left us not completely sure of the antibiotic necessary for the experiment. After doing a bit of research we found that “Cam” is another abbreviation for Chloramphenicol. Our team unifiedly agreed that the protocol would have been easier to follow with optimum consistency.

In all, we enjoyed our experience with the Interlab for iGEM 2018 and we hope that our crew will continue to participate in iGEM’s Interlab study in the years to come. The contributions that we were able to make to the world of synthetic biology were extremely rewarding for us.