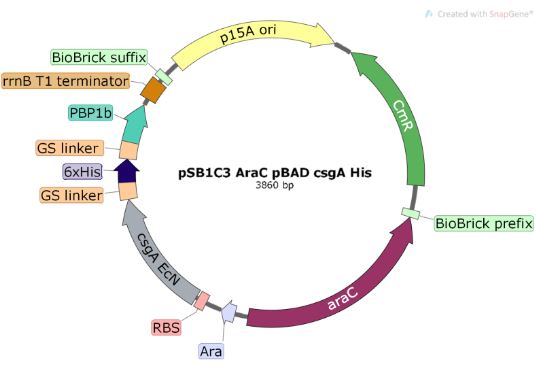 Proteins, which are the essential molecules of life due to their vital roles in electron transfer, signal transduction, transport across membrane and metabolic activities of cells, comprised of peptides. Beside the fact that peptides form functional units when they bind to each other, they also have unique functions in their individual forms provided by their constituents, amino acids. There are 20 naturally occurring amino acids having differences in terms of their structures (variety of side groups some of which are rings), electronegativity and some other features. These differences are the key factors affecting their interactions with other molecules. Escherichia coli cytoplasmic membrane has a protein class called PBPs (Penicillin Binding Proteins) consisting seven proteins binding with β-lactam antibiotics covalently. Either PBP 1a or 1b, which are considered to be the major transpeptidases of the cell, are required to maintain the cell. They have a penicillin sensitive transpeptidase domain in C-terminus and a penicillin insensitive transglycosylase domain in N-terminus (1985 paper). PBP1b is the main synthase during cell division. On the other side PBP 1a is mostly responsible for cell wall elongation (http://www.jbc.org/content/292/3/979.full.pdf). After finding a protein class that could be associated with penicillin derivative antibiotics we then had to decide which protein to use. It is a known fact that normally PBP1b can synthesize peptidoglycans de novo whereas PBP1a cannot. Besides that, studies have shown that PBP1b has a positive effect on cell growth in comparison to PBP1a. In the absence of PBP1b, peptidoglycan surface density decreases; susceptibility of the cells to beta-lactam antibiotics and the risk of being lysed during stationary phase increase (2).

A biofilm is an assemblage of surface-associated microbial cells that is enclosed in an extracellular polymeric substance (EPS) matrix. Biofilm formation most of the time occurs when bacteria are under stressful conditions in order to develop a protection mechanism. The scaffold of biofilm structure is comprised of curli proteins which are functional amyloid fibers assembled by many Gram-negative bacteria as part of an extracellular matrix that encapsulates the bacteria within a biofilm. In wild type E.coli there is a curli operon containing some genes such as csgA, csgB, csgD, csgE, csgF, csgG. Among these genes the most abundant one is csgA which is also one of the main focuses of our project. For our project we chose to use ΔcsgA strain to express biofilms. The reason for choosing this strain is that ΔcsgA is a csgA knockout strain which is not able to produce csgA protein under normal conditions.This lacking of csgA in ΔcsgA cells allows us to be sure that biofilm structure is produced due to our plasmid containing csgA+PBP1b. In order for this operon to be activated there are some optimal conditions that are required to be provided. The maximum activity of the curli operon is observed under the temperatures below 30℃ and in a minimal media which has no salts and minerals (1). Biofilm formation provides microorganisms with certain advantages such as increased resistance to detergents and antibiotics due to the dense and protected environment of biofilm structure allowing bacteria to interact. Beside the chemical properties the bacteria have acquired through biofilms, they also become resistant to external mechanical forces and capable of adhering both to organic and inorganic surfaces. In our project, we are expressing PBP1b peptides on biofilms by conjugating them with csgA coding sequence to create a stable and strong surface where penicillin can bind to. 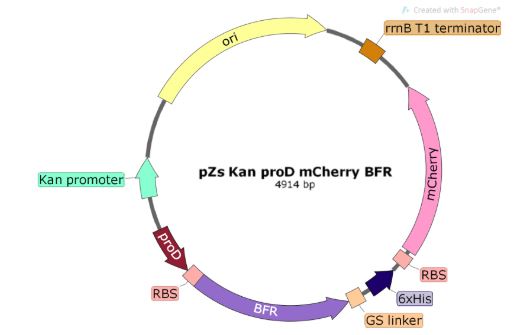 Bacterioferritin (BFR) is the part that is designed by Berlin 2014 iGEM team with the part number BBa_K1438001. Bacterioferritins are natural iron storage proteins that are produced by E. coli. BFR protein form spherical hollow shells that can store the excess iron and prevent iron's toxic effects. BFR proteins exist in most of the well-known E.coli strains. Since E.coli Nissle 1917 strain have more iron storage capacity than others, BFR proteins in this strain considered to be the most developed ones. Studies on the magnetic properties of bacterioferritins have being conducted since 1980s (3). The idea behind using BFR in our project is to be able to manipulate our bacteria with magnetic field. Iron stored BFR after certain incubations will provide us the ability to control the bacteria via magnetic field to refine the water that is treated with our biofilm after binding of antibiotics.

In our project we used mCherry fluorescent protein in our BFR producing construct. When certain properties such as brightness, stability of the florescence signal and the rapid maturation of the protein are considered mCherry fluorescent protein is favorable in comparison to other fluorescence proteins (4). Our aim in using mCherry is to get bright red signal from our biofilm forming and BFR producing cells to easily monitor the movement of the bacteria and control the treated water whether it has mCherry signal or not, to make sure that water is fully refined from our biofilm.